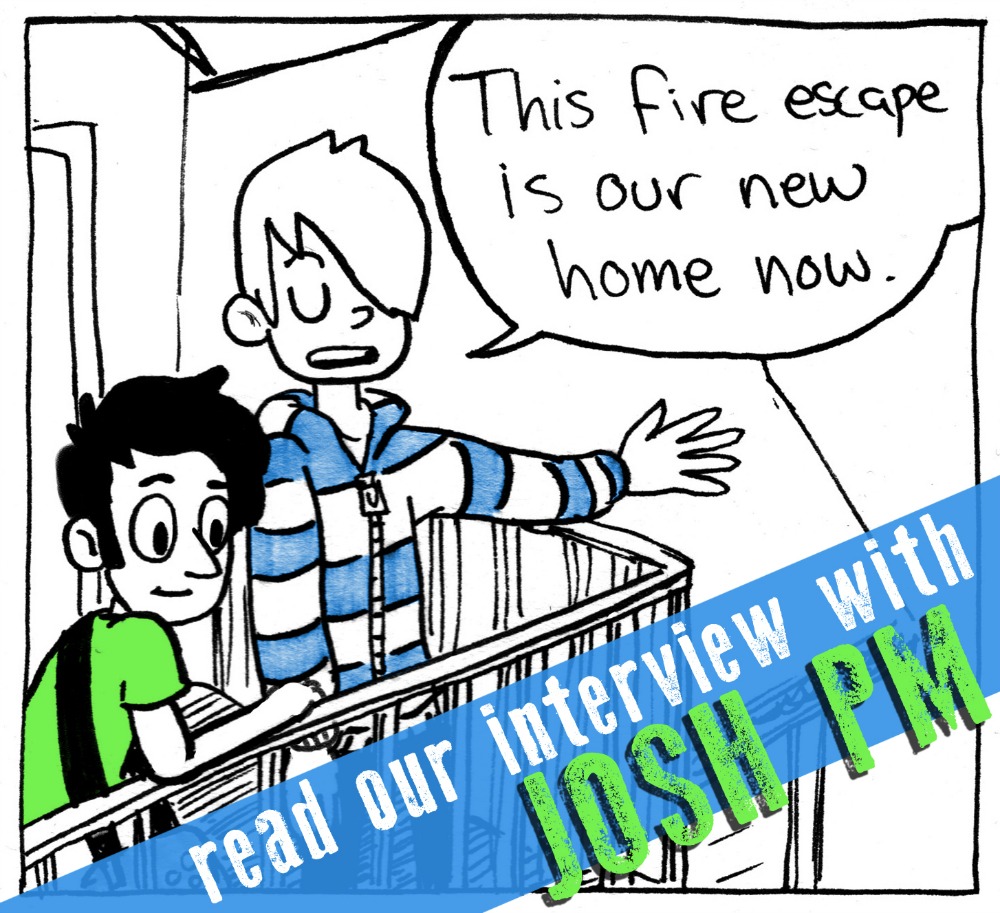 Josh PM Frees first joined the As You Were family with Issue #1, and now he’s back for the newest installation with a comic about his college days. Read on to find out how he got into comics, what he thinks about Philly and San Francisco, and what his favorite ska bands are.

Well, currently I’m managing a shoe store in my spare time, in between drawing and putting together a Cheers-themed sitcom-ska/punk concept album in San Francisco. I like root beer and watching people skateboard.

Mitch e-mailed me to ask if I would do it and I was all “Heck yeah!” It was good timing because I’d just moved to San Francisco to start grad school but was having health problems and was feeling pretty down about my art. As You Were sounded like a really fun way to get involved and also reconnect with the punk/comics scene that had fostered my artistic growth throughout college.

Is your AYW comic based on a real-life experience? Do you find yourself drawing from real life a lot when you make art?

I would say my As You Were comics have all been pretty solidly based on life, though my latest one was more an amalgam of experiences in college. I like using events in life as the basis for my work but to let the drawing process and the internal characters dictate how the story flows. I usually use references like photos and life models when I draw, because I’m not actually that great at anatomy and structure, so it helps to have something to offset that in my work. 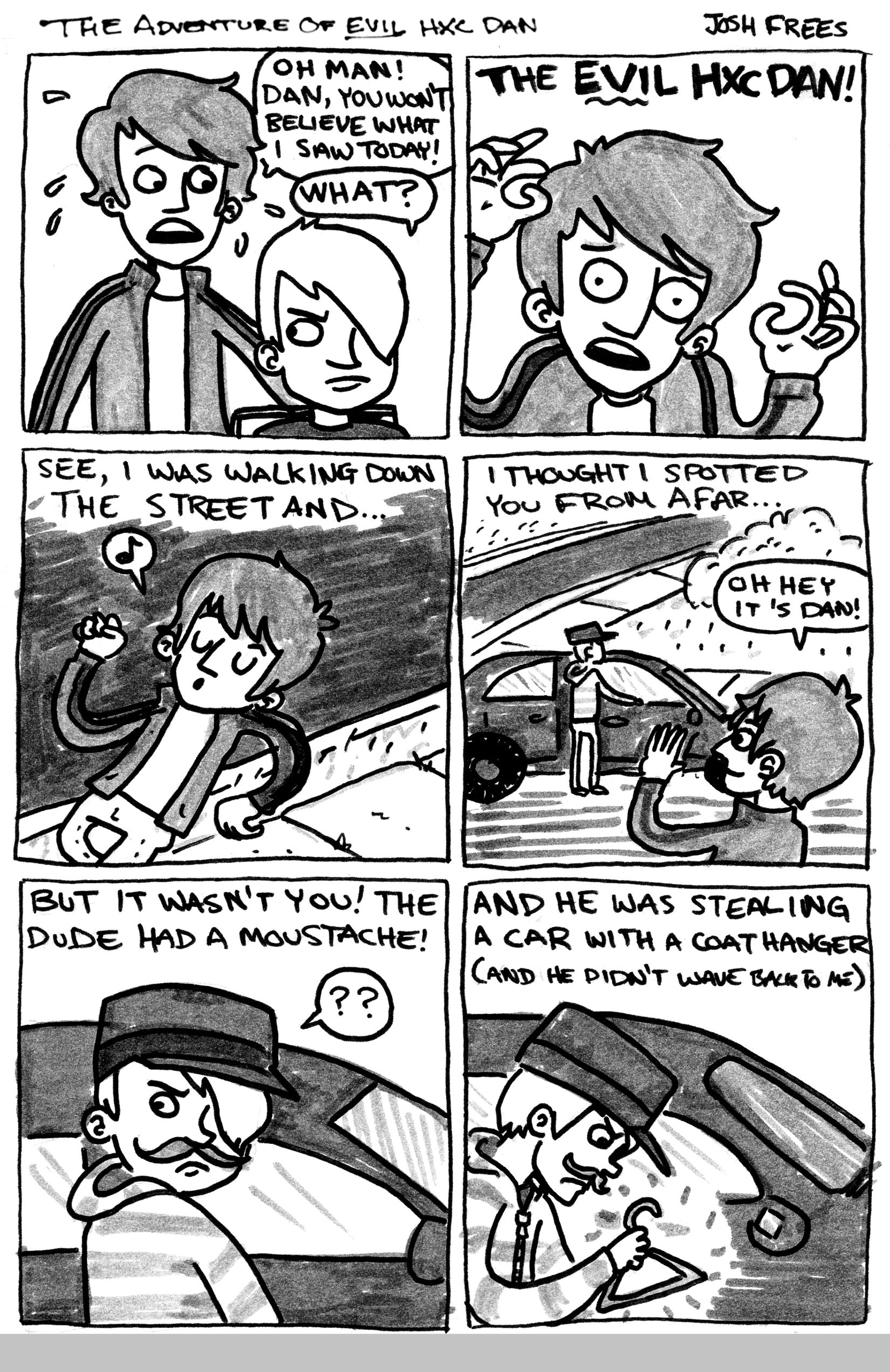 When did you first get into comics?

I started making comics when I was in grade school. My friend Nick and I would pass a cardboard folder we made out of shoeboxes and duct tape back and forth, adding to each other’s drawings, and making up little weird Calvin and Hobbes-, Invader Zim-, and anime-inspired stories to kill time in class when we probably could have been paying attention.

More recently though, around 2006, I started making journal comics a la Liz Prince, whom I befriended through LiveJournal (pre-Tumblr Internet). She and other rad folks—like Rachel Dukes, Mitch Clem, Anthony Clark, and so many more—pushed me to make stories and zines, and I’ve been hooked (inconsistently) ever since.

What is your creative process?

My creative process usually centers on me sketching for a few hours until something makes enough sense that I want to develop it further. A lot of times I don’t really know where to start, but I’ve found that doing some free association exercises with words and drawings is a good way to get the blood flowing and make some marks on paper. I’ll often bounce ideas off of friends to develop them further before actually starting on anything. Then thumbnailing, sketching out rough pages, refining, penciling, inking, scanning… it’s a long process and not super streamlined! 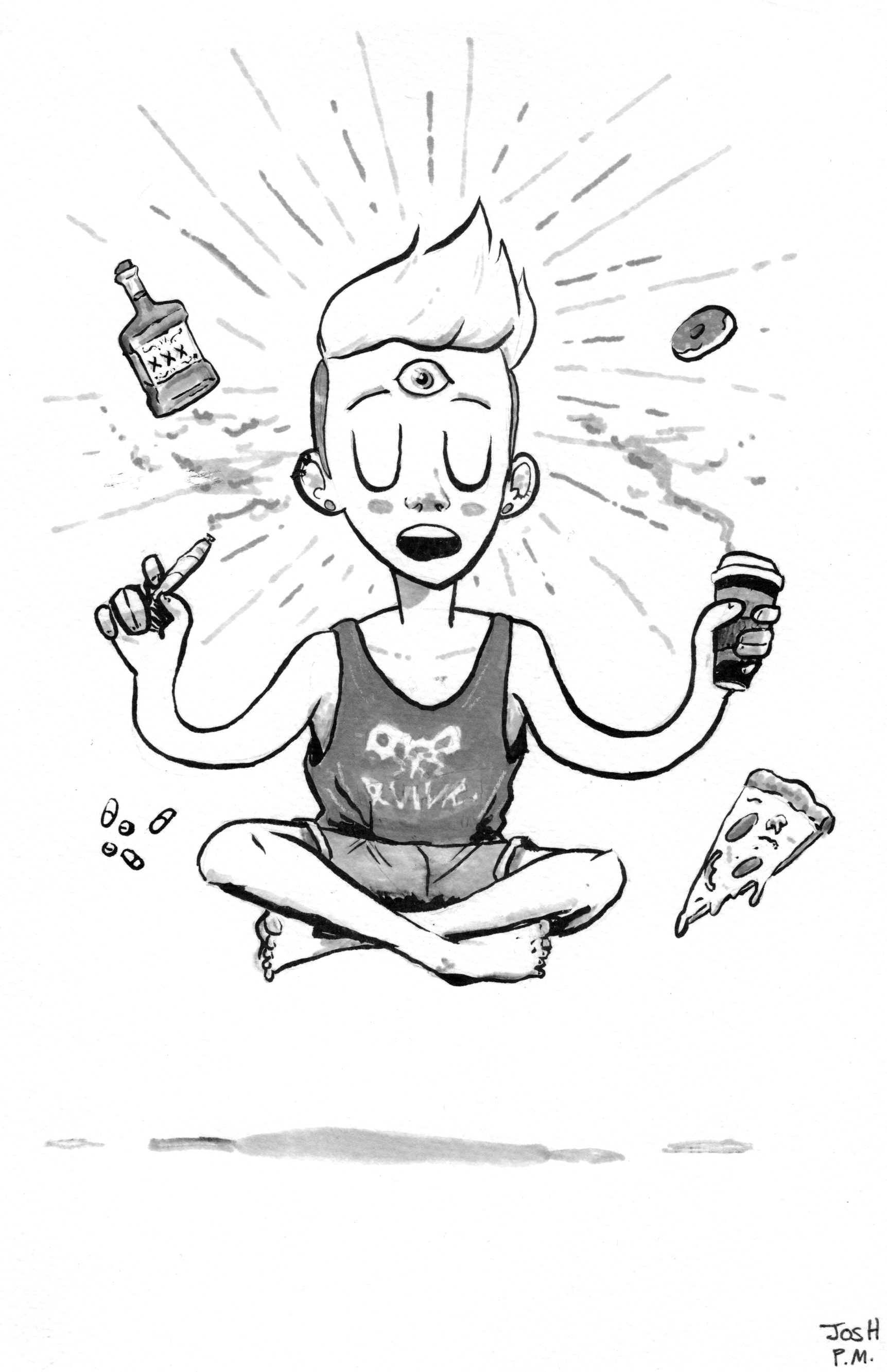 My workspace is often something of a mess. I’ll usually have my computer with some music going, and a sketchbook and my notebook with ideas out, and then I kind of go from there. I’d love to dedicate more space in my house to making art, but it’s at a premium with how we’re set up. A lot of times I’ll have to sit on the floor to spread out and ink things because my desk is too crowded, but it’s also kind of a zen mess.

You’re originally from Philadelphia but live in San Francisco now. What made you move? In what ways are those two places strikingly similar or different?

I moved out to SF originally for grad school at the Academy of Art University. I really didn’t like their program and ran into some health issues my first couple years here and ended up dropping out, but I really liked SF and wanted to be somewhere other than Pennsylvania for a while.

PA is lovely and I still consider it home. I love going back to visit because it usually means catching up on all the stuff the East Coast does better, like punk shows and cheese steaks, as well as hanging out with old friends, maybe playing a show with my old ska band, or just family time.

SF is a stress pit, but it’s also beautiful and still pretty weird if you know where to look. Both cities are very walkable and have good secret pockets of punk/DIY culture. I’d say the biggest difference is in SF people are trying to make it big and get rich and famous. In Philly, people are creating stuff to enrich their lives and the lives of others and create a community that fosters that. 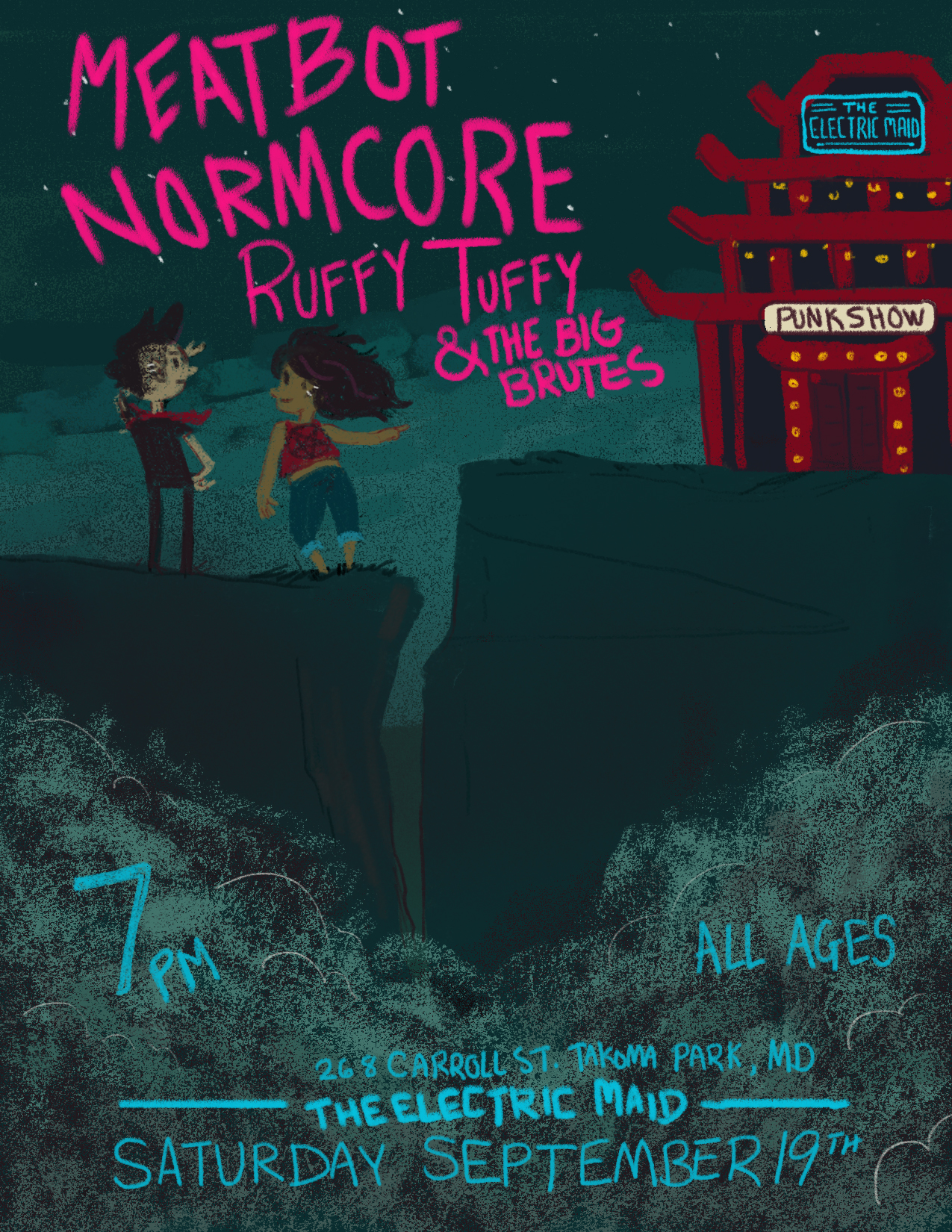 What are some of your favorite contemporary ska bands? Is it weird still being this into ska?

Sometimes I wonder if I’m the only ska kid left. I still love the Mighty Mighty Bosstones, Bruce Lee Band, and Streetlight Manifesto, but for newer stuff, I usually go for bands my friends are in, like The Snails, The Heat Machine, Behind Deadlines, and Max Levine Ensemble (they have a ska song on that latest record!). It used to be a much bigger part of my life and I would love to start another ska-inspired band some day… anyone else in?? I have some song ideas. Let me play you some demos…

I think one of my old Hardcore Dan minis would actually still be pretty representative of my work as a whole. Those zines depicted college life with my roommate/friend Hardcore Dan in a very narrow and goofy way that I still love.

I also often show people examples of my illustration work, like a t-shirt I did for Joyce Manor that I’m pretty proud of. I feel like I want to show people work that they’ll think is cool so they’ll also think I’m cool and I can trick them into being my friend and then we can hang out and we’ll have more people to play board games with. 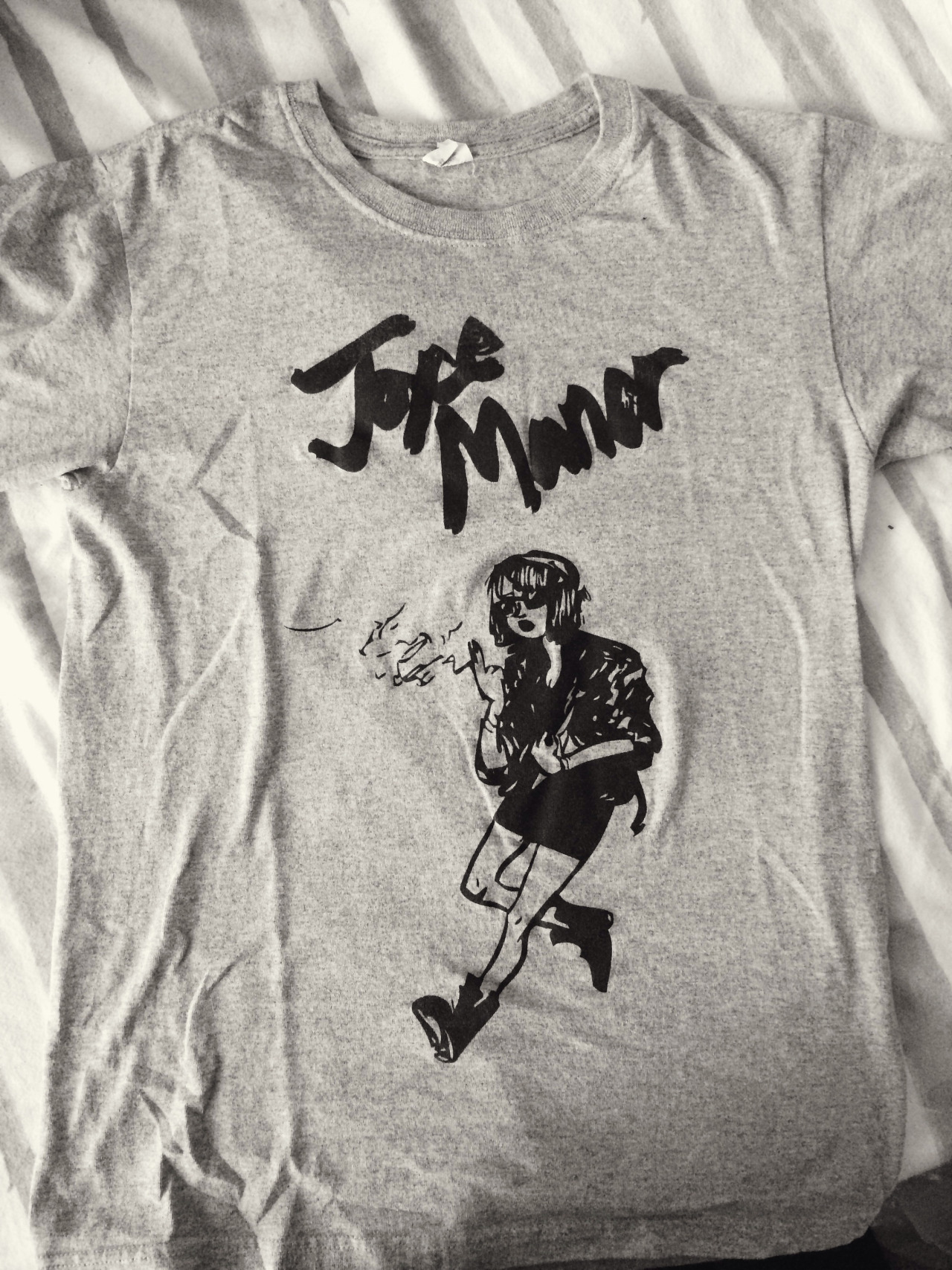 It’s looking like a crazy busy year. I was promoted at work and it’s been eating into a lot of my free time. All of my bandmates have moved away from San Francisco, so I guess I’m back to square one there, although hopefully we’ll get everything squared away with Normcore and our six-song EP/comic book will be out by the end of the year!

Mostly, I’d like to dedicate more time to making art and comics again, because 2014 and 2015 were very quiet on that front and I think I can do better. I have a couple ideas and some collaborations, so while there’s nothing set in stone, I think I will make at least a couple rad things coming soon!

Sam Alden, Georgia Webber, Becca Tobin, and Eric Kubli are just a few pals that I know are making amazing comics and other work. Kevin Budnik has revived the journal comic format for me. Flynn Nicholls is a sleeping giant just waiting for his big break. Sam Bosma‘s Fantasy Sports series can’t be missed. I’ll also name drop Kevin Czap, Jeremy Sorese, and Jessi Zabarsky, because if you haven’t read their books yet, you’re missing out!

In music, I just saw that David Combs and Erica Freas have a new band called Somnia. Their debut album drops in June and there are a couple rippin’ tracks on their Bandcamp page that I’ve been jamming to. My co-worker just showed me a band from Nevada called Failure Machine that has some cool soul-inspired tunes that I can get down with.

Q: What ever happened to the “Josh PM” Encyclopedia Dramatica page?
A: No clue, but it did say I was “King of the hipsters” for liking ska and wearing a bandana, so that’s something, right? 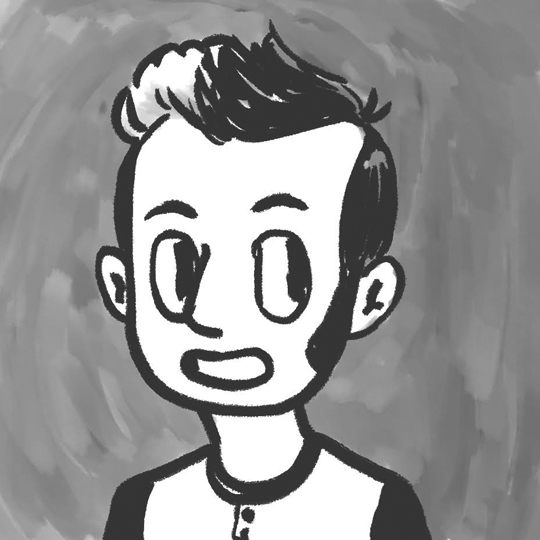 If you liked what you read, or if you’re just looking for someone to play saxophone in your ska band, pick up a copy (see what we did there?!) of As You Were: Living Situations, or follow Josh on Tumblr.