Previous Next
“Rotten Plums and Black Bananas” by Emily Timm

Today’s comic, “Rotten Plums and Black Bananas” by Emily Timm, is about working in an anarchist commune. 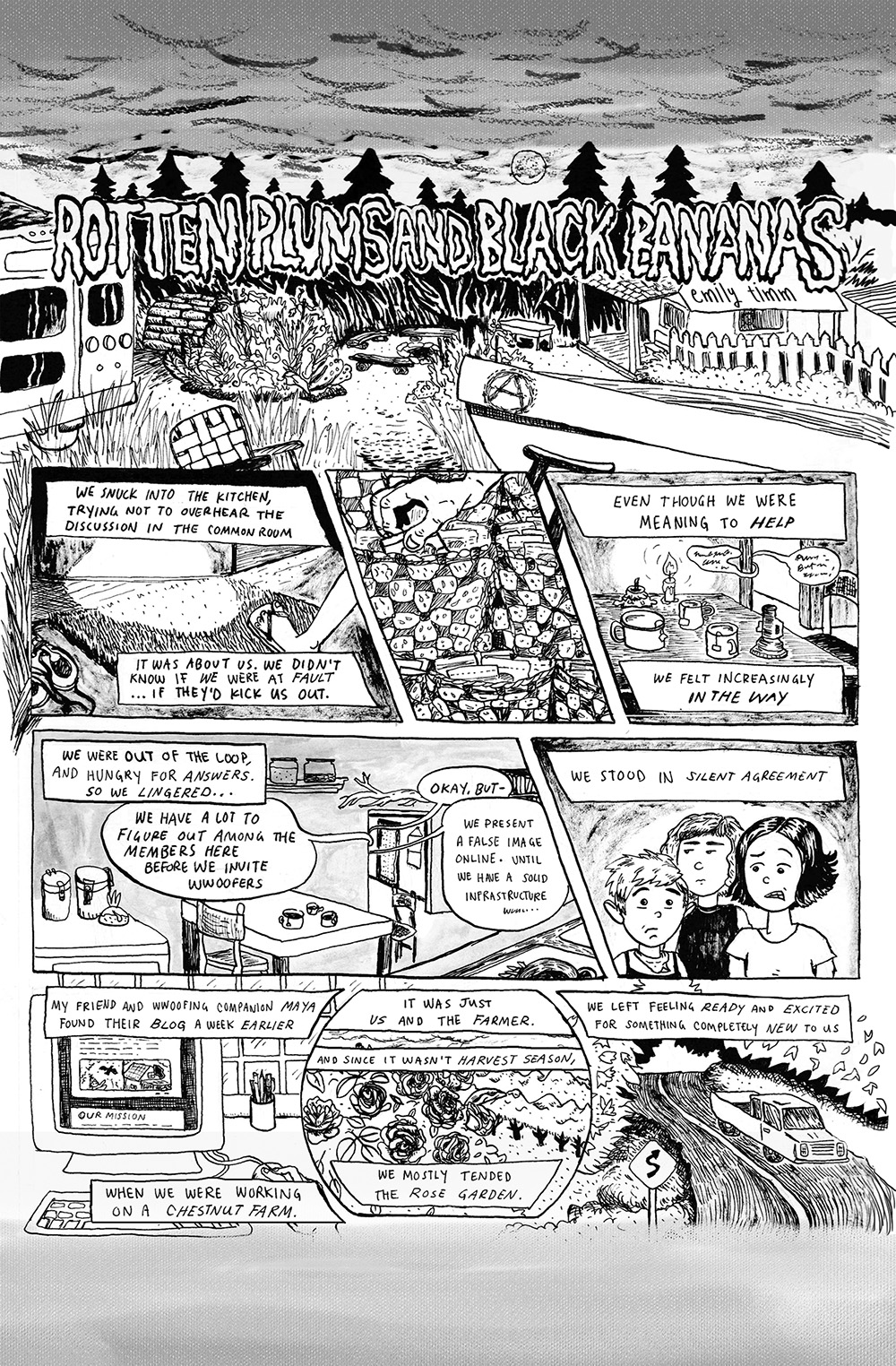 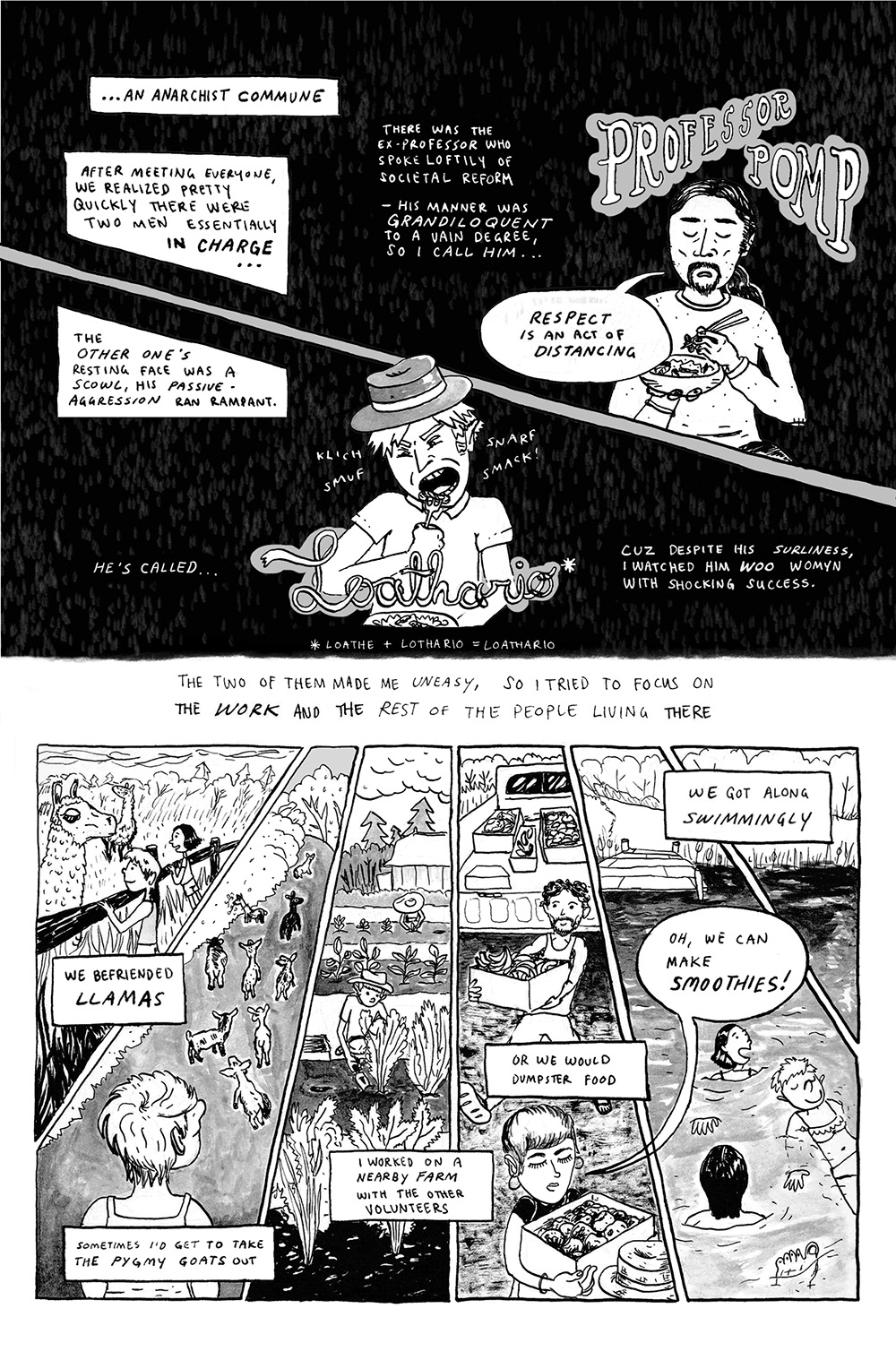 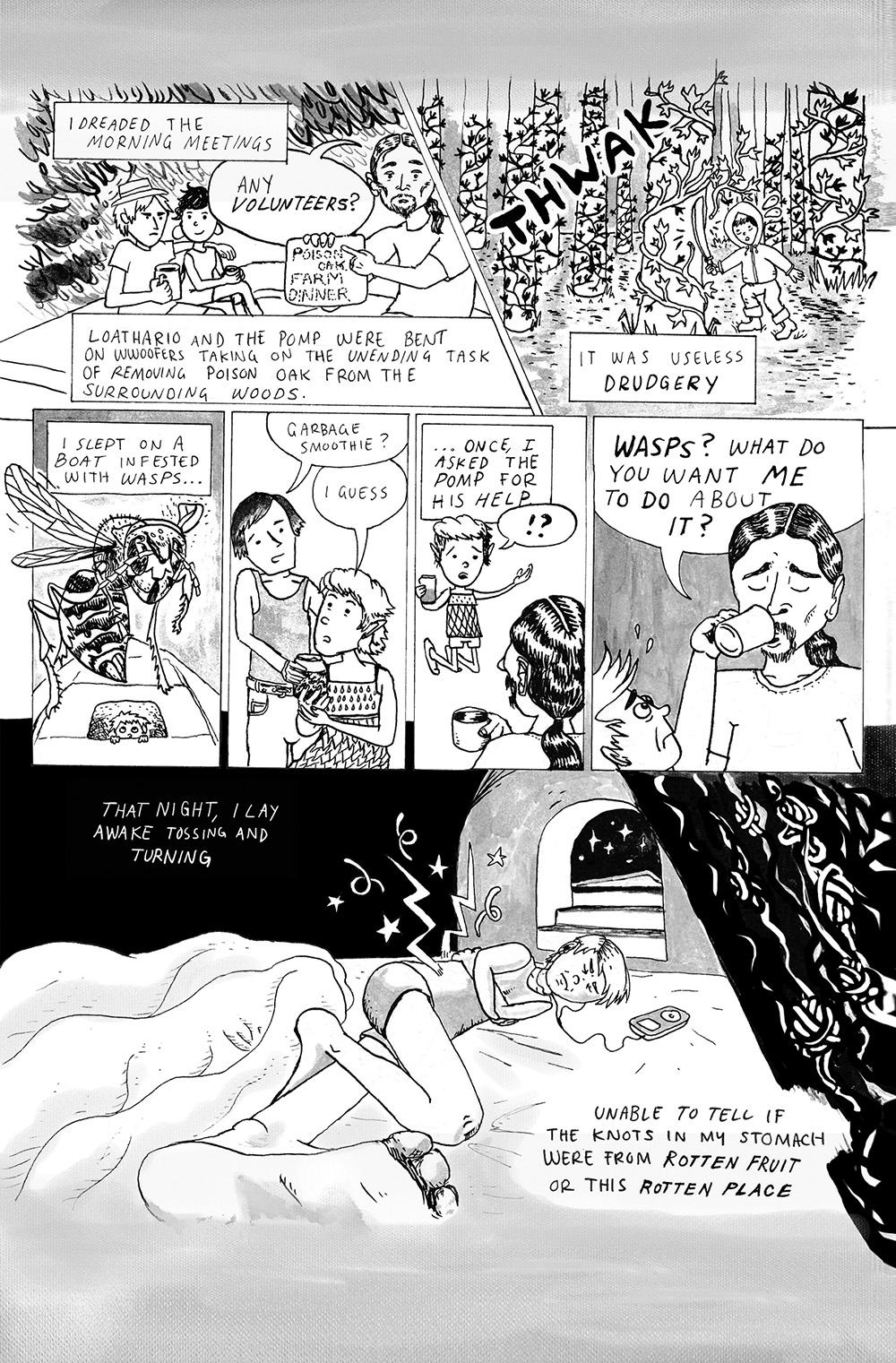 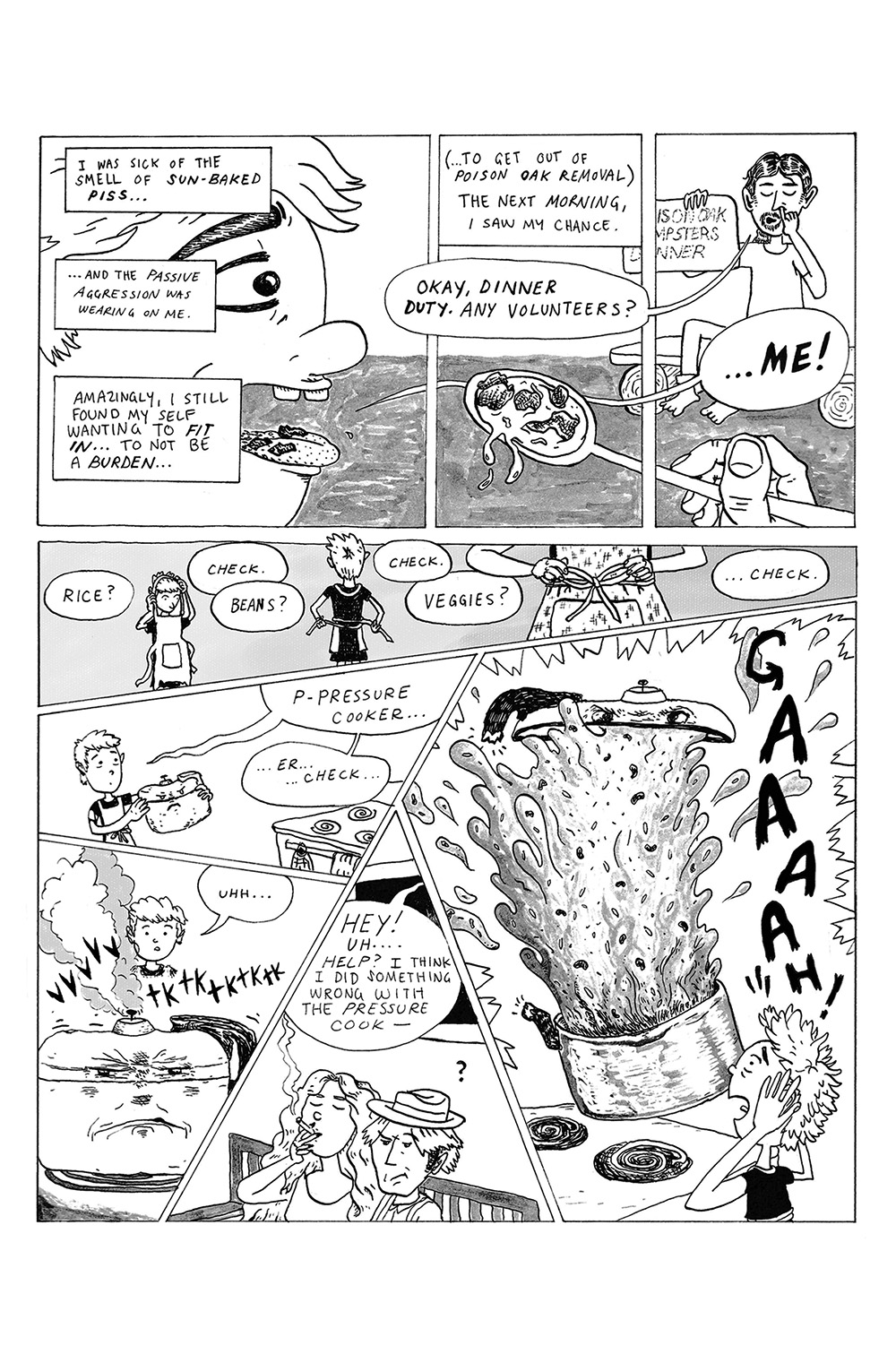 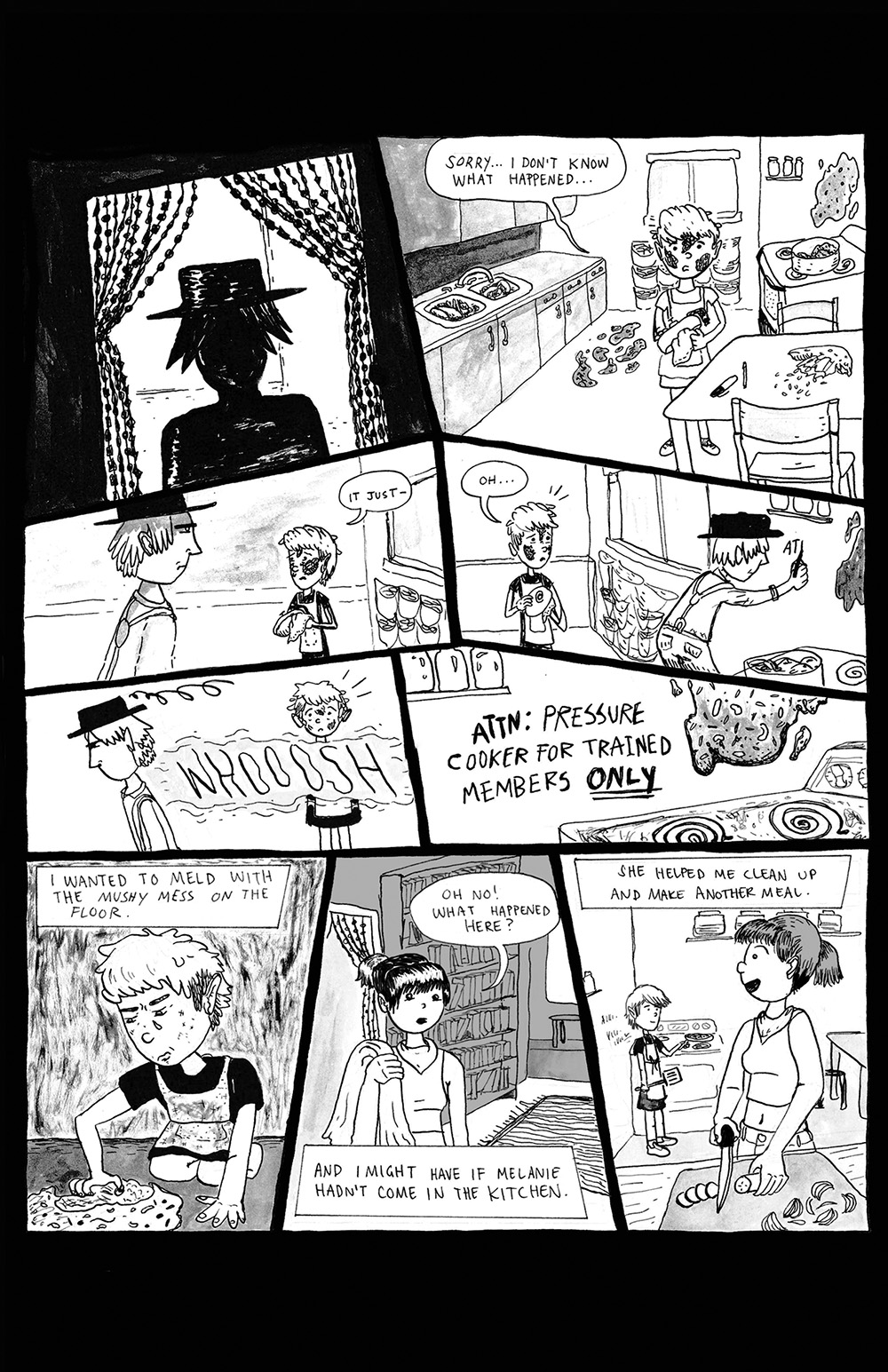 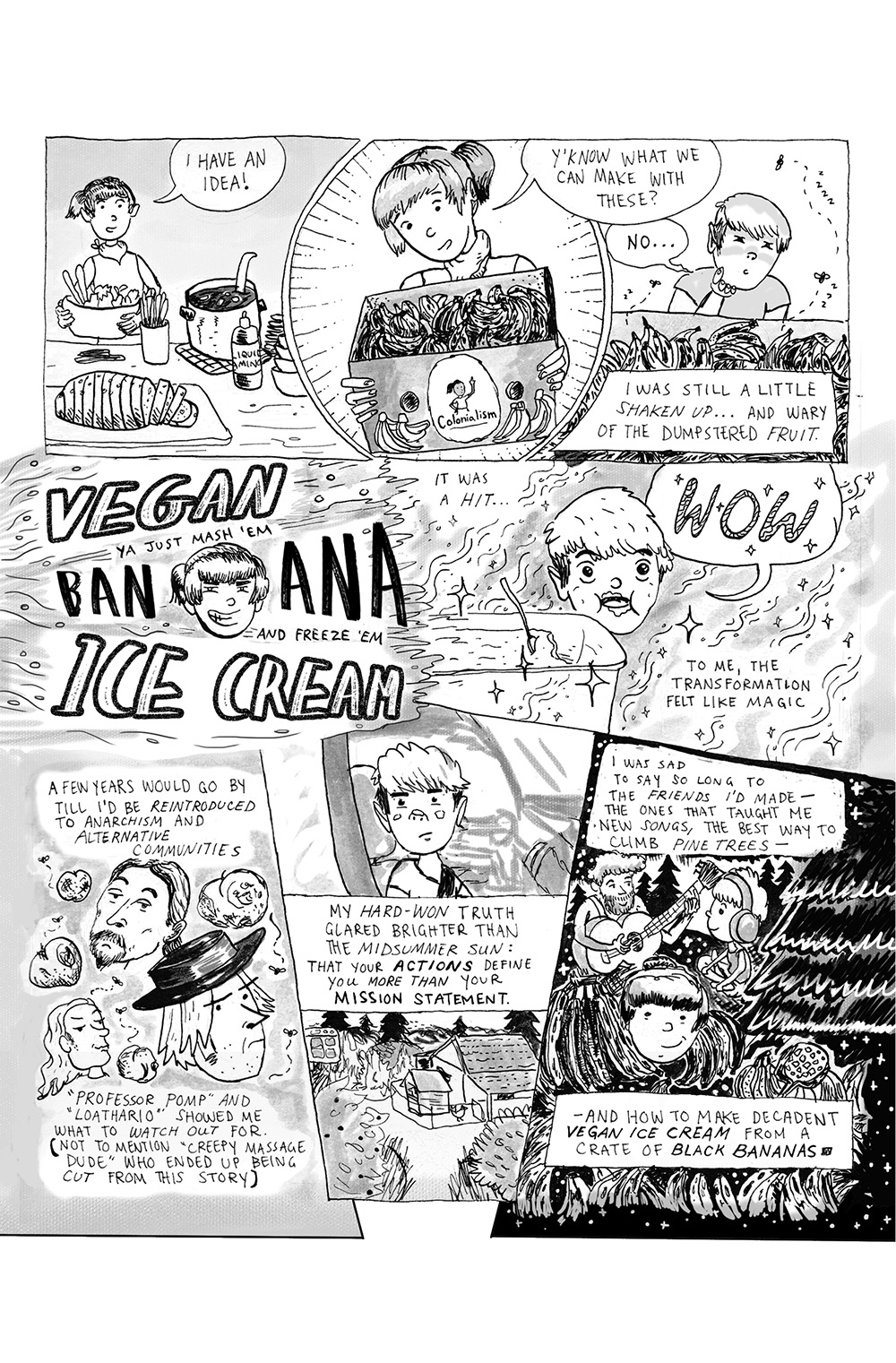 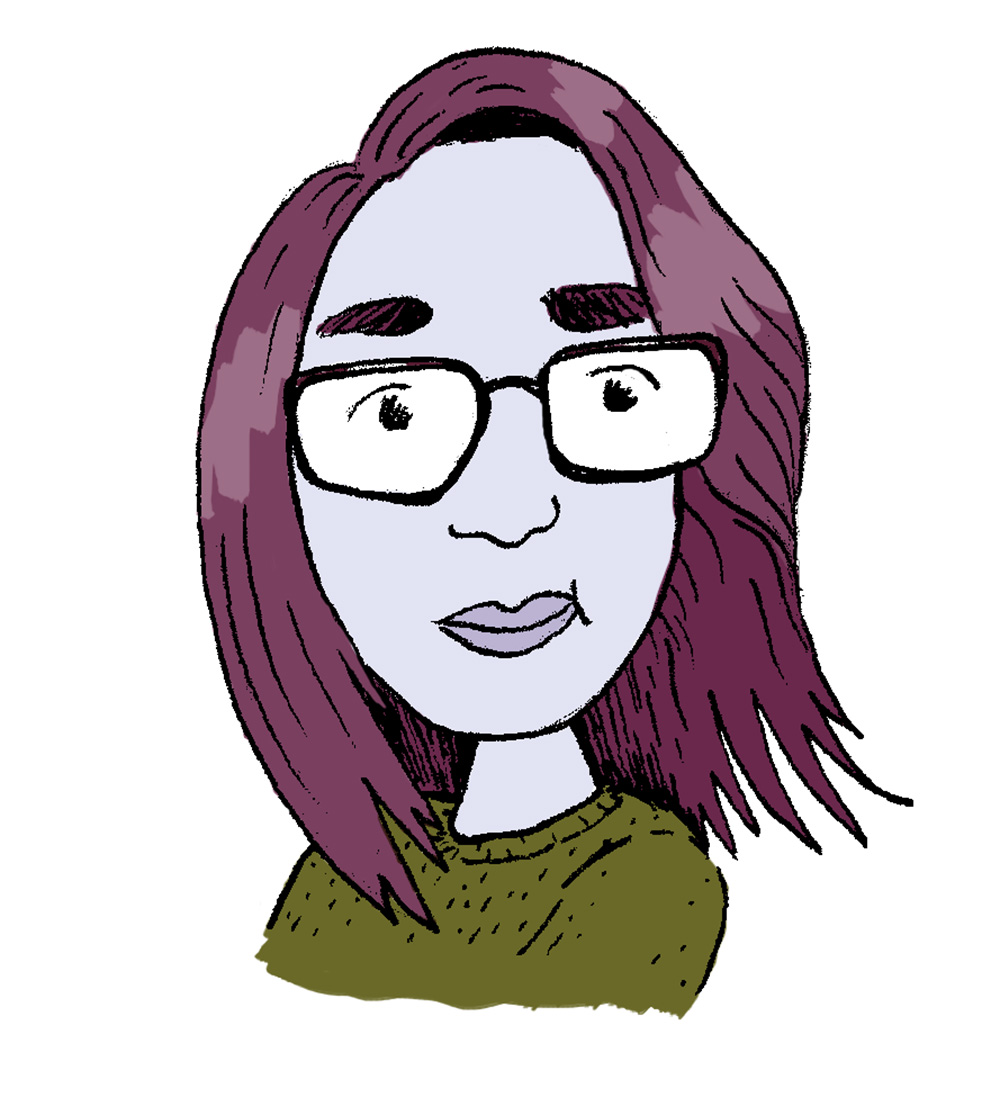 Interview with Emily Timm by Rick V. for Silver Sprocket

Can I ask you a few questions?

You have illustrated more things than you have drawn comics. Do you consider yourself more of an illustrator or a cartoonist?

Probably an illustrator. I’ve been doing it longer and have more illustration and design under my belt at this point than comix. I’d like to start regularly publishing comix, and once I get going on that, I’d feel more comfortable with the title “cartoonist.”

What are a few notable things you illustrated recently?

I design flyers for shows that my friends put on at The Void. Shoutout to The Void, Bloomington’s first DIY venue! I don’t book a lot of shows, so I like helping out by making the flyers. It’s a chance to get creative without getting too serious. More “notable” would be the design work I do for Plan-It-X and Secret Sailor Books.

You did the cover for Chris Clavin’s Cursed In Cairo book.

Yeah, that was pretty easy and fun since it’s just a few photos that I recolored. After that, I did the book design and cover for Ryan Fletcher’s One Singular Date. It’s about the day he was attacked and almost died. He wrote about that and how it has affected his life… It’s a powerful story and I’m glad it’s in book form. I had free reign of the cover design, which I wanted to be eye-catching but hold true to the tone of the book.

I wanted to make it look clean.

Your first comic was the Los Gatos Negros album companion comic, which some of us were blown away by because it was your first comic. It by no means looks like a rookie effort, and it was 15 pages. What did you use as source material? Or did you just guess this is how a comic should look?

I made a storyboard, which I learned how to do in college from making animations and movies.

It looks like an artist who has no idea how to make a comic made a comic.

Are you working on any long-form stuff like that right now?

I’ve recently decided to re-work an idea into something more manageable and more likely to get done. I used to go on tour in Florida a lot and became attracted to the juxtaposition of sunshine paradise and seedy hellhole. So I wrote down all of these ideas on the road about the only vampire in Florida. I wanted to turn that into an episodic story, but I don’t have the chops for it yet. So now I’ve decided to take this goofy idea and do it in a short, three-panel comic format, which I think will be more effective.

Moving to your comic in As You Were #5, you worked at an anarchist commune. How long were you actually there?

How old were you at the time?

Can we hear about the “creepy massage guy” you briefly mentioned in your story?

This guy thought he was very sex positive but he was just very creepy. He would go around and start massaging on people whether they wanted it or not. There was one night we were all sitting around and he just says out of nowhere, “Oh man, I really want a massage right now!” And everyone just ignored him. Looking back on it, I can’t believe I tolerated a person like that because I wouldn’t for a second now.

I liked the line “My hard-won truth glared brighter than the midsummer sun: That your actions define you more than your mission statement.”

I felt like I got catfished! Online they present themselves as welcoming, positive, and fun. And we got there and it was just falling apart. A lot of members had just quit and they didn’t really know what to do with us or care. It was awkward!

So how did you peace out?

My friend actually left three days before me and left me there! She went to her uncle’s house to smoke hella weed or something. I just told them I was gonna leave early too. No one really cared. Maybe they were happy I wouldn’t be blowing up any more pressure cookers! I soldiered on through the next few days until my boyfriend at the time came and picked me up. He was ready to walk around and check out the place but I just jumped in the van and we skedaddled!

I would say one rewarding thing you learned there is that rotten banana ice cream thing. It’s surprisingly very good!

Yeah, it was one of the few things they got right! And actually the person who told me about it was another volunteer. The title “rotten plums and black bananas” alludes to me figuring shit out as an idealistic youngin’ — I showed up and saw potential in that place, but had to find out for myself what was good for me and what was gonna make me sick.

You might think that it’s a no-brainer not to consume a bunch of rotten stone fruit, but it was my first time in an “intentional community”; I took the wisdom of the members for granted. It might have been easier to leave if everyone there was an asshole, but there were really only a few rotten plums spoiling the bunch.

What was the worst job you’ve ever had?

Maybe this is biased, because I have a forgiving memory that spares me the teeth-grinding details of my past jobs. That said, I painted houses all last summer. I applied to the company as a “color consultant,” but they really needed house painters, and I was so ready to quit refilling coffees and apologizing to yuppies that I took it. On a typical day I was outside, on a huge ladder in 90 degrees, with bees, little supervision, and Ira Glass.

But probably the worst job I have ever had was working in medical records in a call center. It was a full-time desk job calling doctor’s offices for worker’s comp cases.

That’s the thing. I wanted to submit a story that was interesting and not just the worst job I have ever had.

But he had a story to tell with his! There was intrigue. And maybe it speaks to the superior storytelling abilities of Steve that he could write a compelling story using his full-time desk job. Mine was super boring with nothing weird or bad ever happening, except for the fact that everyone showed up every day. Oh, and my supervisor was a huge Dream Theater fan.

Where are you working now?

I got a job for the university corporation doing set painting, mostly for the opera. Not only do I not hate it, I kind of like it, which is a weird new feeling! I get to keep my art muscles limber, and I get to work with my friend!

What comic people have you been likin’?

I’ve been reading a compilation called Double Think on my lunch breaks. I’ve been trying to go through my bookshelves and read everything I haven’t read: a medley of anarchist zines, and wordless comix like Cave In by Brian Ralph.

I recently read a comic from a collection of Hellraiser comix I got for my partner who is really into horror — it was written by Neil Gaiman and illustrated by Dave McKean. It’s really creepy and good. Dave McKean has such a rich, eerie, painterly style that I love.

I just finished the last book from the Earthsea series by Ursula K. Le Guin… I cried at the end. I’m terrible at reviews, but there is something way more real and lasting about the characters in Earthsea compared to those in Harry Potter. It’s a must-read, but so are all her books!

I’ve never liked hard science fiction. I prefer storylines that use the anything’s possible premise to make a pointed statement about our world. Hard sci-fi seems so self-indulgent, but maybe that’s just because I find it boring. Le Guin is great, though. Paolo Bacigalupi, Octavia Butler, and Margaret Atwood are also great.

Other than the past two issues of As You Were and Los Gatos Negros, what else will we see of yours on zine shelves?

Only on the finest of zine shelves will you find our recently created comix zine, Flag Day! For those who don’t know (which is probably most people) it’s a zine about our — mine and yours — various June 14 birthdays over the years. And also a short comic by Ben Snakepit.

That sounds cool! Got a full autobiography in there about you, right?

I’d call it an abridged autobiography. Some parts are kind of personal and some parts are about relatable birthday things. Really, we are just trying to drum up a little more awareness about Flag Day, ‘cause it’s a grossly under-appreciated and underrepresented holiday.

Alright, anything you want to add?

For more from Emily Timm, check out her website.