Previous Next
“$¢/Per Slice” by Anna Vo

Today’s comic, “$¢/Per Slice” by Anna Vo, is about how capitalism destroys us. 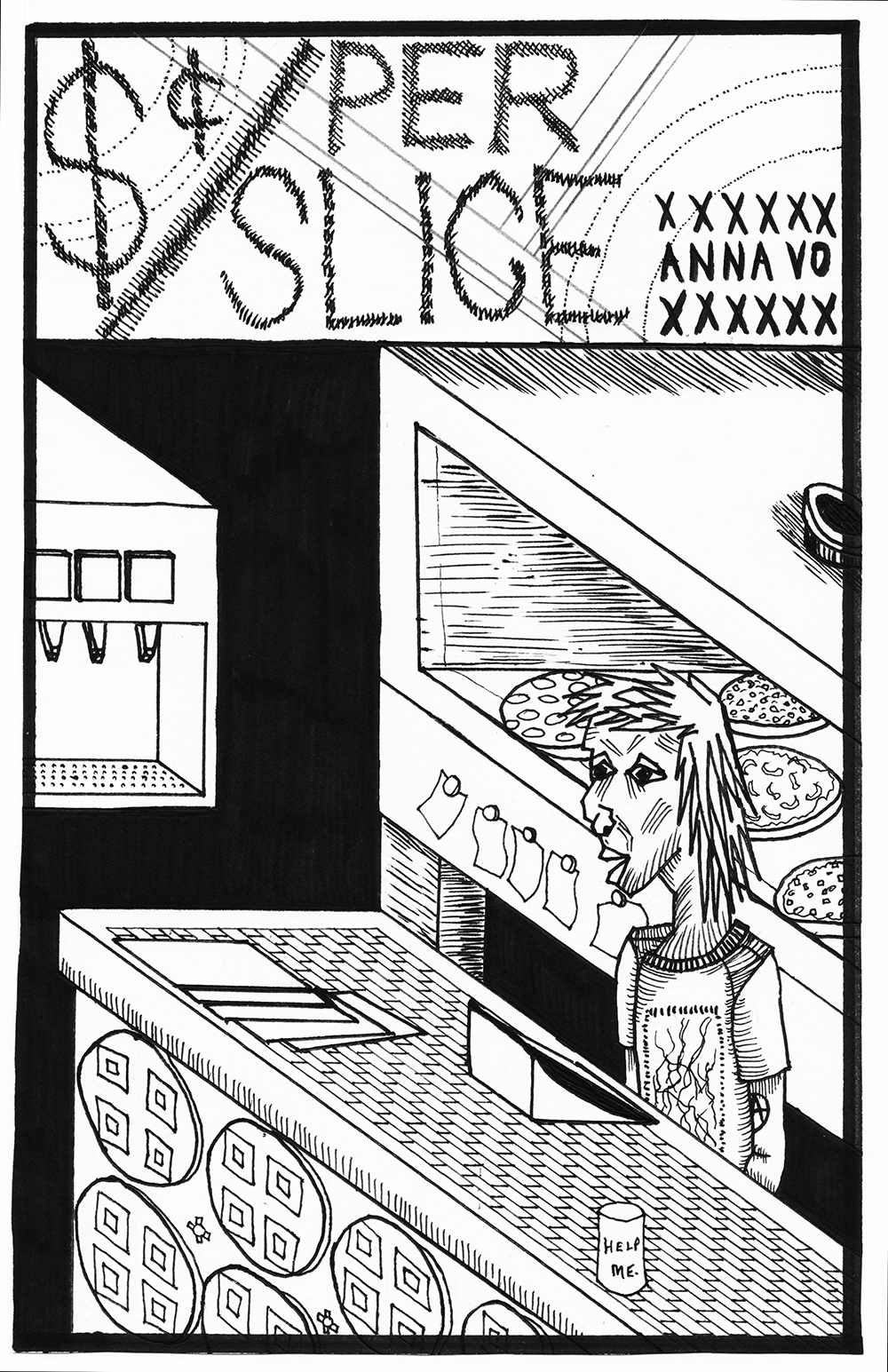 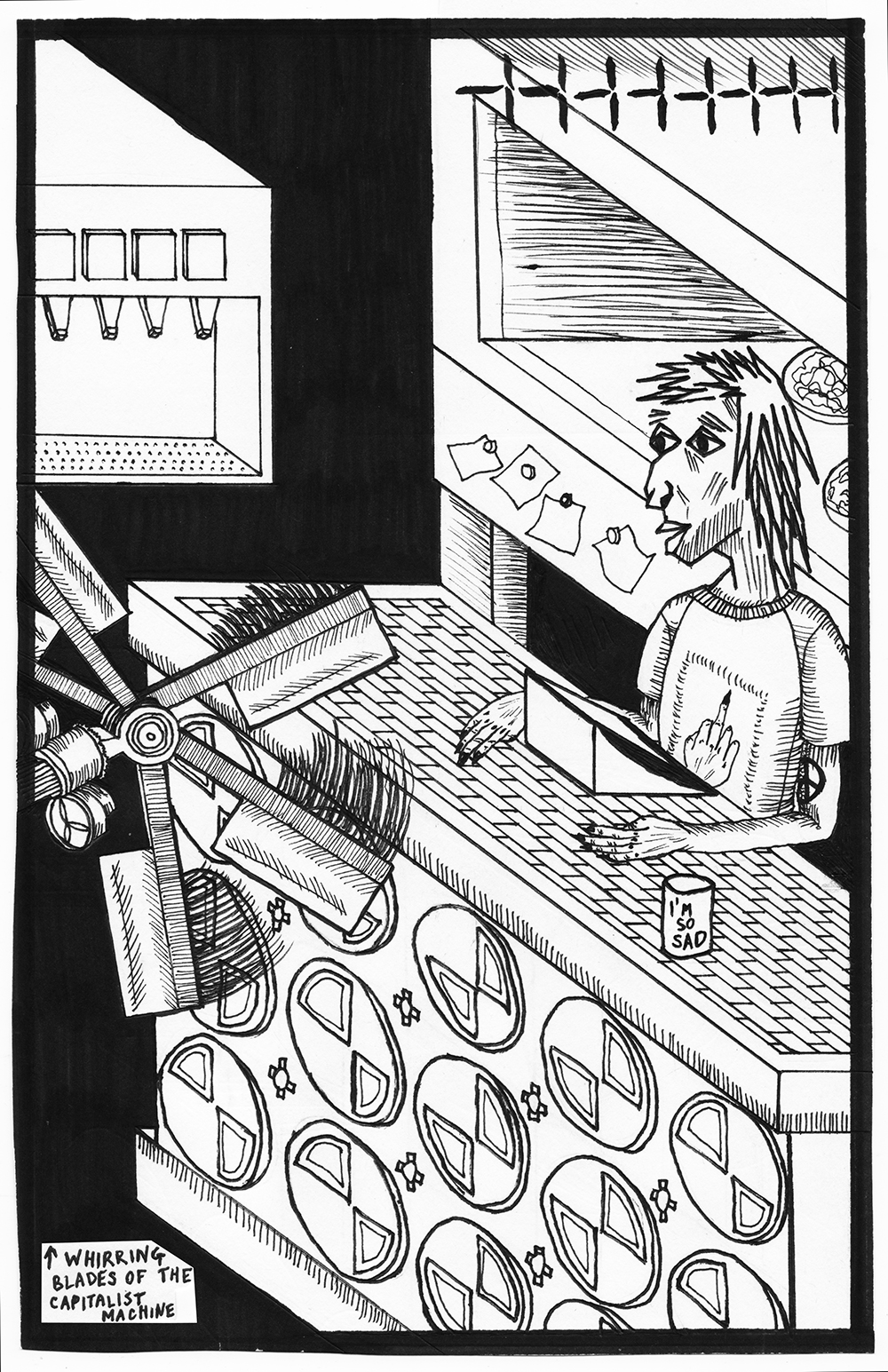 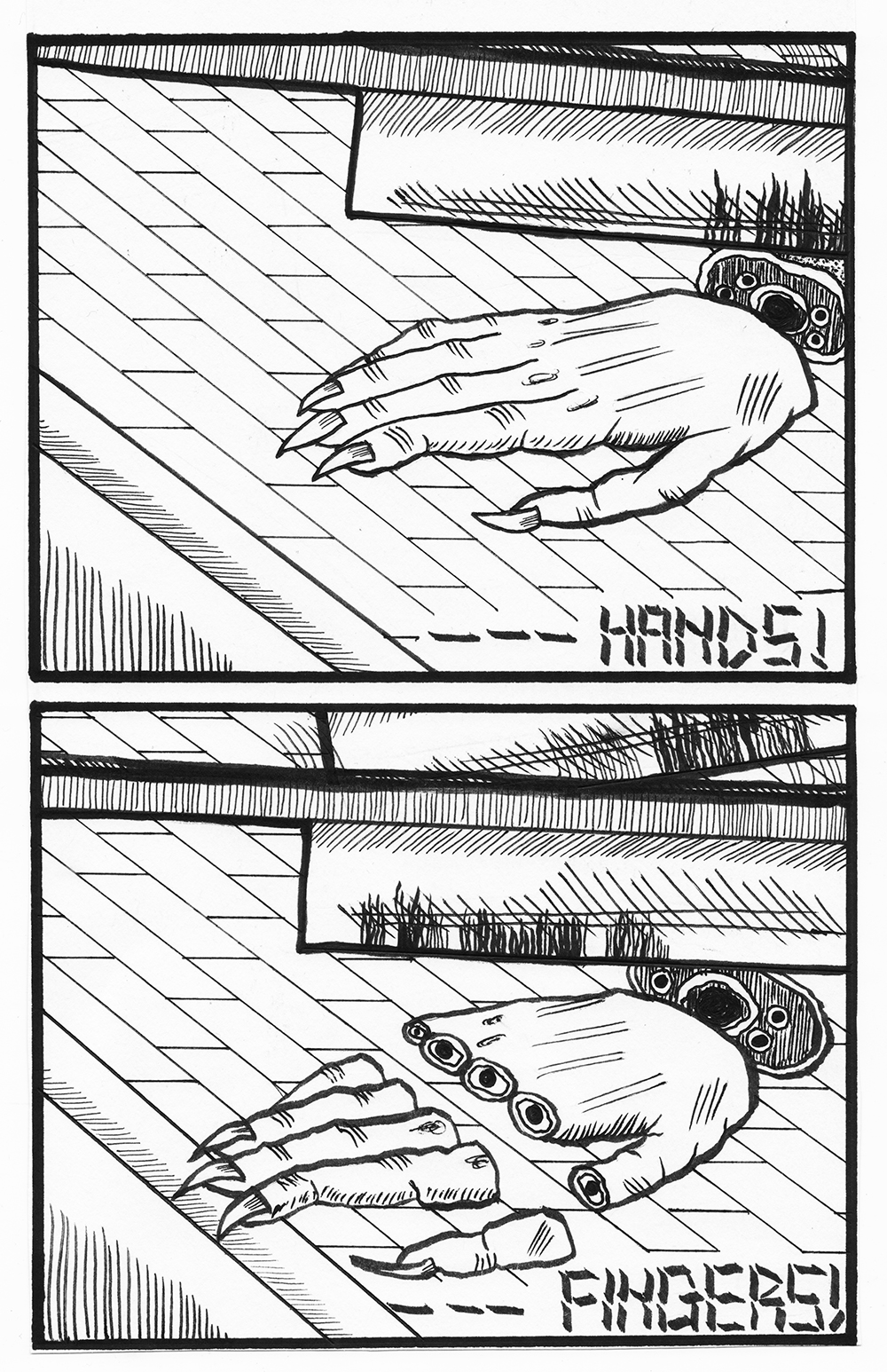 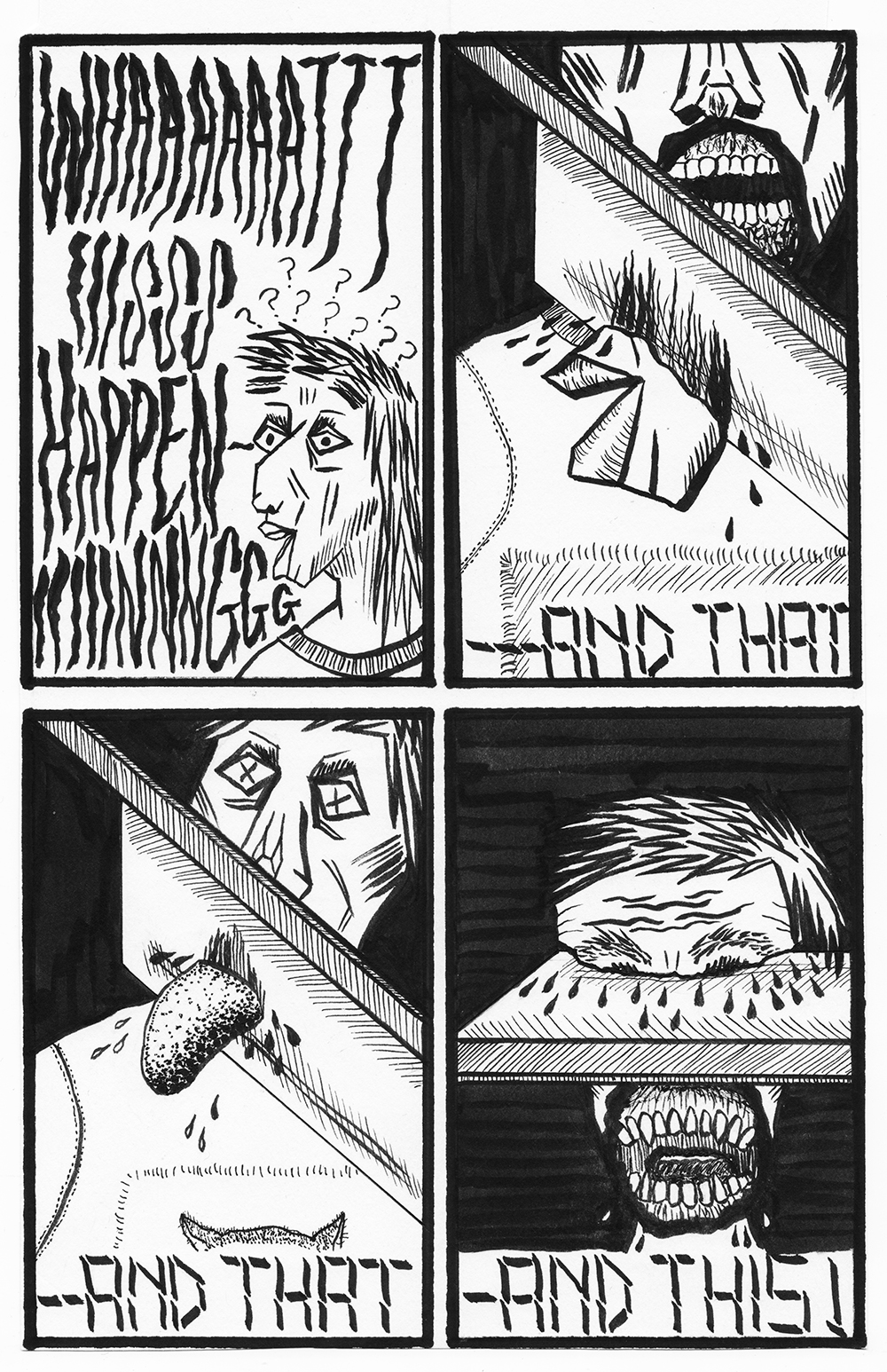 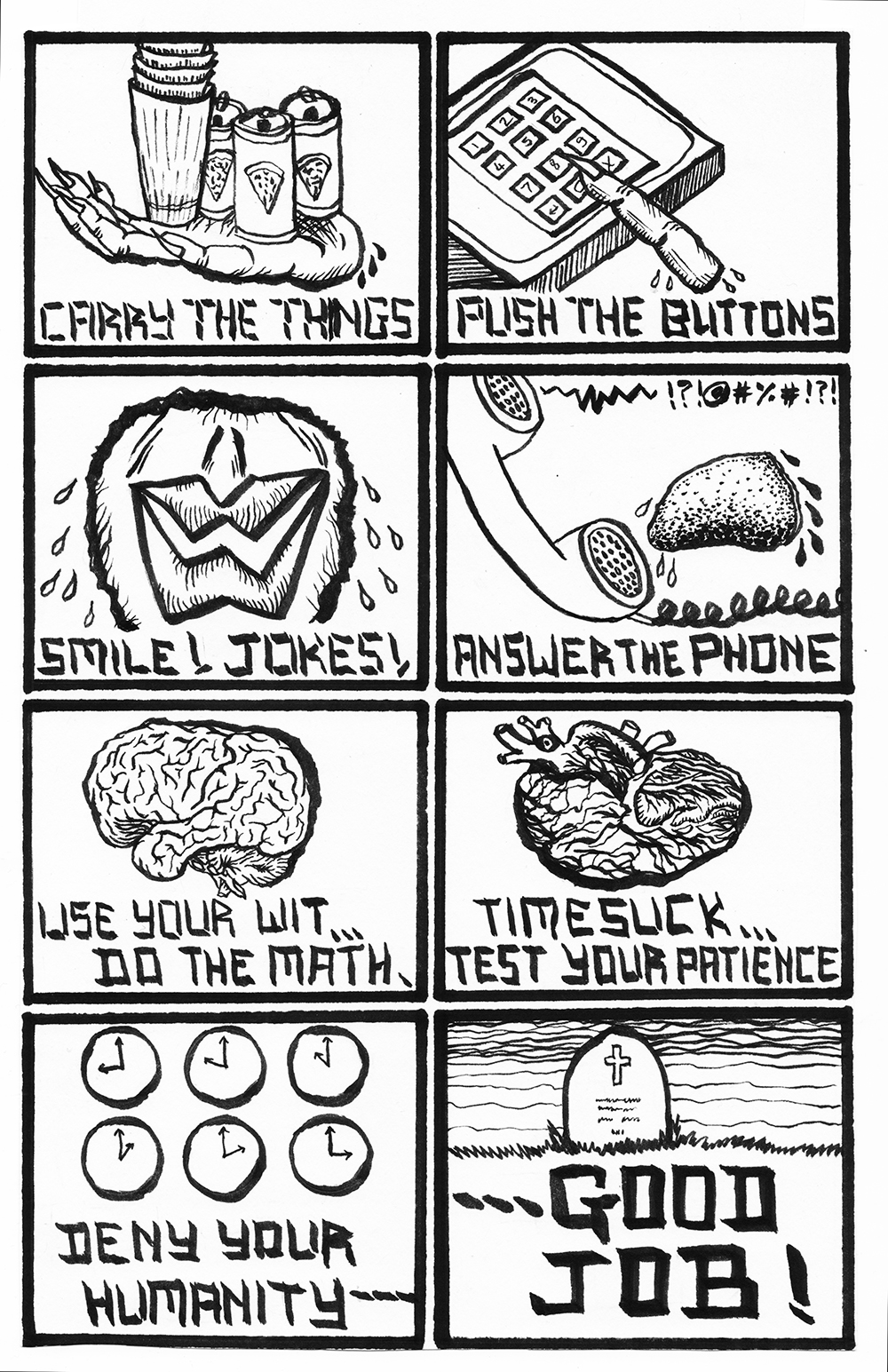 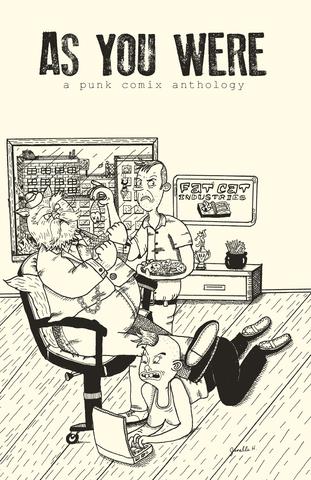 Interview with Anna Vo by Natalye Childress for Silver Sprocket

Can you tell us more about the job you share in the comic?
I have never worked in a pizza place, but I was sitting with a couple people who do at a Tender Hesher craft night when I started drawing that comic. The comic is about how capitalism degrades workers and puts value on our menial tasks and bits of our bodies and repetitive motions rather than on us as whole people/humans. How much labor is just an exploitation of a single part of your body or a minimal function of your mind/knowledge? Work under capitalism and commodification is, in essence, dehumanizing. People putting monetary value on time, tasks, or effort are replacing their meaning and context with the act of making it transactional.

Tell us about some jobs you’ve had and any takeaways you have.
I worked in retail and in a tattoo studio (also retail) early in my employment history, and the most valuable thing for me was building a relationship and bonding with other people who shared a common suppression/pressure or dismal experience of the owner or person in charge, and the way that friendship or familial bonds came out of that worker-manager dynamic.

I run sound at a punk venue some nights and love it when bands treat me like a person and get soooooo pissed when people don’t. MUCH respect to all those who work in retail, the service industry, teaching, nursing, etc. and feel reduced merely to a function at times.

What is your dream job?
My dream job would be something fun and frivolous like working for horror movies making and designing latex monsters, or something serious like getting paid to be a revolutionary activist, lol.

What is the value or purpose in making art?
I think that, unfortunately, many social situations (shows, group dinners, active hangouts) don’t allow much of a deeper inquisition into each other’s emotional states or intellectual lives, though one-on-one is usually pretty cool. But I find that art, for me, personally is my introverted and quiet way of telling stories and positing theories and scrutiny and reflection on life phenomena that I might not have the energy or extroversion to share in real time verbally/socially. It’s my way of proposing my questions (not imposing, as some have taken it) and ideas about the world that I live in, which is dynamically changing, and also very different to worlds I have lived in in the past. I know that through my zines about anarchism, colonization, gender, and trauma, I have built a really cool global community.

Do you think artists have a social responsibility?
I am really glad you asked this question. I think all humans have a social responsibility as a basic condition of living in a society. My output reflects that belief I hold. I understand that others do not hold that view and therefore their art reflects that. I understand nihilism and misanthropy — both of which are also social relationships. I also understand that folks are able to engage socially on different levels — maybe they proxy through machines, they work with policy, or through words, case by case, one person at a time, or through imaginary paradigms. Maybe it’s purely with the physical world and about artifacts. However folks prefer to engage socially, I respect that. It is when “artists” or “activists” or “punks” engage as if they are solo egos or lone heroes in the world, or their work is not in dialogue with their environment — that is what I have no interest in being an audience for.

What are you working on now?
I am working on comic books and stand-up comedy and illustration and a bunch of political action (Trump survival measures) as usual, but the thing I’m most excited about currently is working on my garden and enjoying it during spring and summer. I wanna be able to grow and share food with friends and neighbors.

If someone liked your comic in As You Were, what would you recommend they check out next?
They should check out little stink for commissioned illustrations and my webstore to order my comics.

For more from Anna Vo, check out their Bandcamp and website.