“As You Were” punk comics zine returns with #2: The Pit

Praised by the likes of MaximumRockNRoll and The Onion AV Club, the As You Were series features contributions from comic book and web-comic artists active in punk rock communities from around the world.

As You Were #2 is available by mail-order from the Silver Sprocket web-store, and retail distribution through Revolver and Last Gasp, with a suggested retail price of $5. 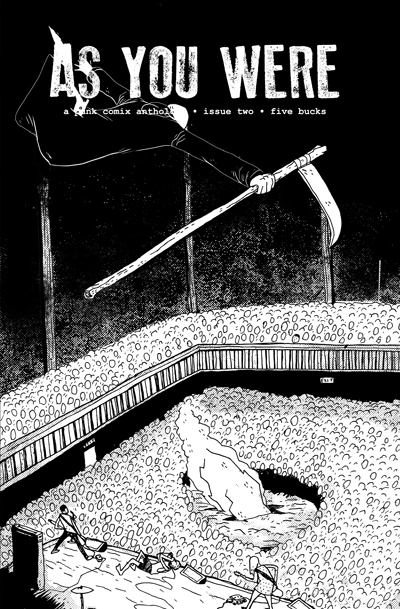 Wow, True Believer! What an amazing comic zine, well put together, printed well, cardstock cover and its all about house shows! Tales of victory, regret, missed connections, gripes, glory and rage. This zine is doing so many things right, it’s got a pretty equal mix of boys and girls, straights and queers, jaded complainers and stoked kids, a beautiful cover by Steve Larder and even better centerfold by Liz Suburbia that I want blown up on my wall. Liz Prince and Anthony Sorge’s monster stories are hilarious, Brian Connelly and Ashley Palafox bring up some very important points on being considerate at a show – I could keep going don’t take my word for it, go get it. A Must Have. (AG) – Maximum Rock N Roll

Many of today’s greatest creators of alternative comics got their start in the zine world, and some, like King-Cat Comics’ John Porcellino, still primarily reside there. Accordingly, there’s something refreshingly uncompromising about As You Were: A Punk Comix Anthology (Silver Sprocket). The folded-and-stapled anthology brings together more than a dozen zine-centric artists to tell tales of DIY punk shows—those held in warehouses, basements, living rooms, what have you—and how the subcultural etiquette and expectations of that scene can be both liberating and confining. Although collecting a wide range of viewpoints and styles, from the cute and cartoony to the scratchy and angst-ridden, there’s a thread of passion, craft, and self-starter ethics that makes the book a unified whole. [JH] – The Onion AV Club