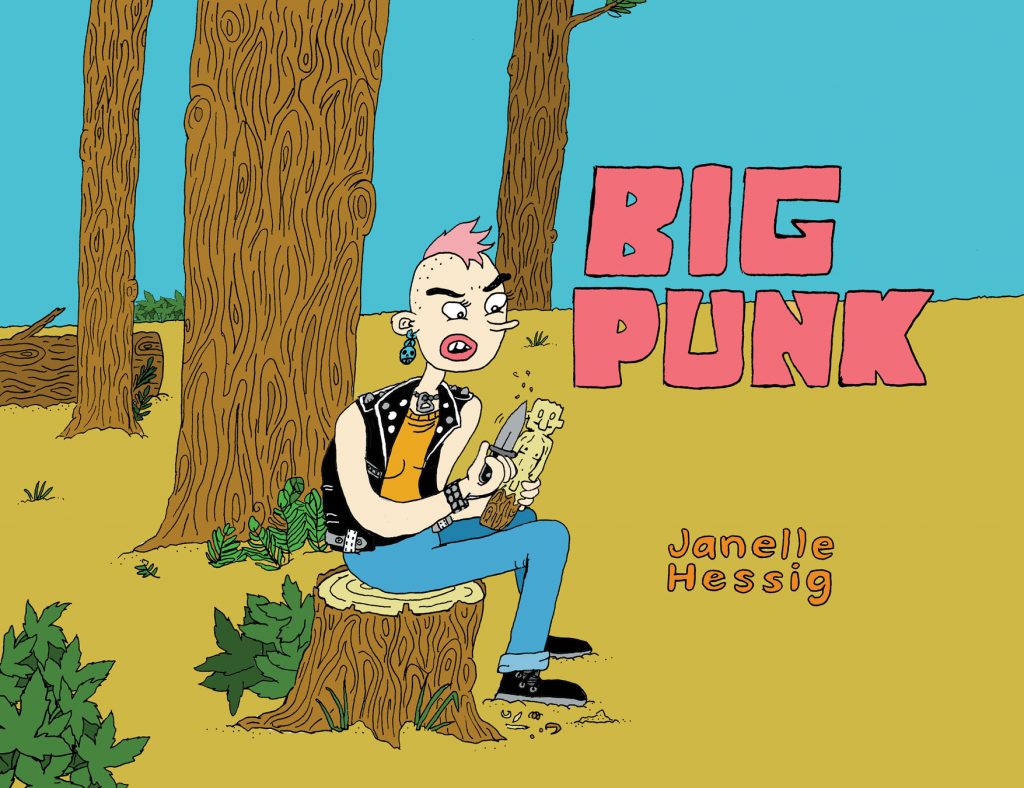 Fed up with wealthy techies destroying the formerly gritty culture of Fog City, a punk lady moves out to the sticks to soothe her soul. Though she is only looking to escape, a mysterious and hairy stranger disrupts her plans and causes her life to change in unexpected ways.

…It’s a bright, vibrant, funny, fairly simple (and I mean that as a compliment), contemporary take on “be careful what you wish for” tropes that looks and feels very much like something a 20-year-old punk would come up with —but when you peek below the surface, you’ll see just how crucial a part experience plays in crafting a story like this.

And I mean that as a compliment, as well, just in case there was any doubt. Hessig’s skilled linework and finely-honed storytelling “chops” belie a veteran’s sensibilities throughout, but there’s an ever-youthful energy to this well-paced “back to the land” cautionary tale with a twist that will likely never end up feeling stale simply because, hey, good cartooning never does. And in this book, Hessig serves up some damn good cartooning, indeed.

Part of this story’s youthful “vibe” is certainly down to the fact that it features a youthful protagonist dealing with youthful problems — the most pressing being the gentrification of San Francisco stand-in “Fog City” and the Silicon Valley yuppie invasion that comes part and parcel with that both pricing and, more crucially, annoying her out of her own home — but the manner in which Hessig shows not only empathy with, but intuitive understanding of, the mindset of a person a couple of decades her junior is uncanny indeed, and lends these entire proceedings an authenticity that a person who actually was that age would have difficulty replicating on the page. This then, folks, is the real deal.

Of course, a high-priced techie shithole would be the kind of place anyone would be glad to leave in their rear view mirror regardless of age, but as soon as our ostensible heroine gets in the sticks with the hicks, she finds she’s desperately dependent upon the wares those same rich nerds make their living developing and promulgating, which is a bitter enough irony in and of itself  — yet it’s one that is quickly shuffled to the bottom of the deck of her problems once a hairy visitor from the woods makes its presence known. Maybe the city’s not so bad after all?

There’s plenty to relate to in these 18 pages, and it’s communicated in eminently relatable fashion, but if you’re not in the mood for anything too terribly serious — much less anything too terribly self-serious — you’ll be pleased to know that, topical as Hessig’s mini is, she never gets preachy, and does a terrific job of showing how getting too high up on one’s high horse inevitably sets one up for a fall. This is an obvious enough little morality play, no question about that — but it’s also obviously really good and balances out thoughtfulness with chuckles in perfect proportion. Try that, ya pesky up-and-coming funnybook makers!”

“Big Punk is exceptionally detailed and witty … a delight.”

“This book is funny and shocking, with some sexual humor as well as profanity, but it is also an interesting take on what happens to rebellious people as they grow older. Sure, they carry on the struggles in their own ways but their lives and popular culture transform as well. In a different way, it reminds me of the themes in Jaime Hernandez’s Is This How You See Me? with its take on aging punk rockers. It is intriguing to see how defiant people eventually settle down, particularly when they do not necessarily mellow out.”