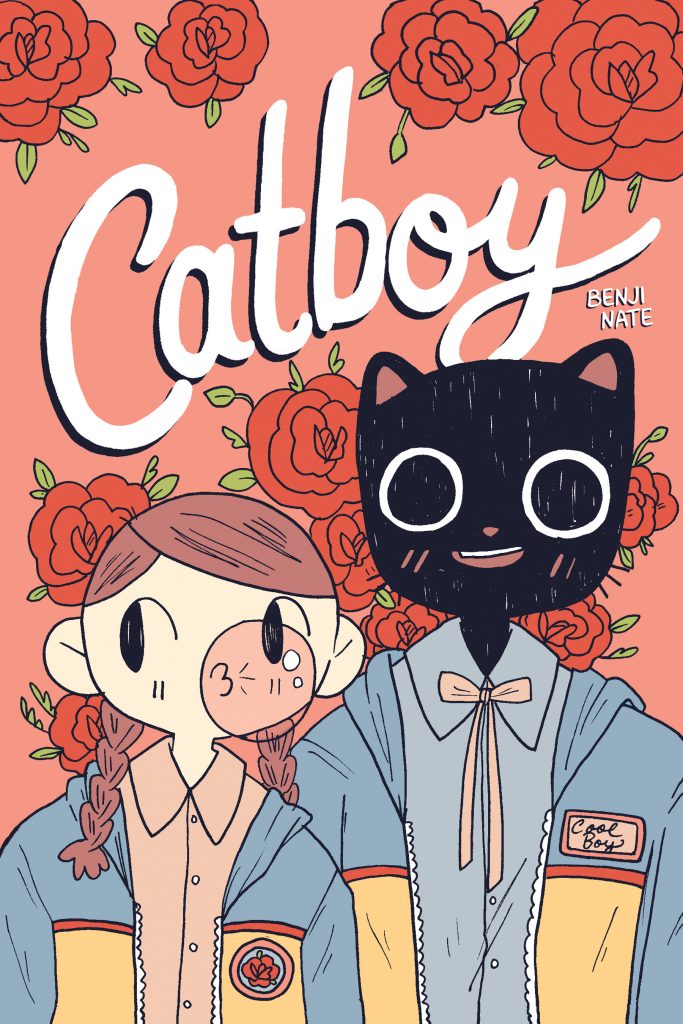 Olive is a human, and Henry is her pet cat—although he’s also a person, thanks to a magic shooting star. They do all the things best friends do, like share clothes, go to parties, and complain about their jobs. Who cares if Henry gets more compliments wearing Olive’s clothes, or the party snacks are dead rats? Friends love each other no matter what.

This updated, complete edition features over 20 pages of new Catboy content, thick manga paper, and is also now available in hardcover for the very first time.

Olive wishes her black cat could be her best friend, and he magically becomes a cat boy, who speaks English and stands on two feet but is unfamiliar with human customs. After his transformation, Olive thinks her cat Henry shouldn’t be naked, so he puts on her clothes and continues to raid her closet throughout the story. Henry is adorable in dresses, skirts, and shorts; and his gender-bending sense of style mostly goes unremarked-upon in a lovely, normalizing way. He’s just a boy rocking cute dresses. Sometimes Henry is better at being human than Olive (he becomes friends with the popular girls) but other times Henry is utterly cat—gifting Olive a dead bird and shredding all the toilet paper. The muted four-color pastels and big head, big-eyed characters make Catboy all the more endearing.

A young struggling artist wishes she could hang out with her cat like she would a person, and the rest is history. There’s all the cuteness you could imagine as they eat pizza, go to parties, apply for crappy jobs, and generally figure out the world together. If you’ve ever anthropomorphized your pet as thoroughly as I have and considered dressing them up in your clothes, Catboy is a match made in heaven.

I often wonder what it would be like if my cat were a human. If the humanoid-feline of Catboy, Henry, is any indication, she would be an adorable weirdo who won’t ever forget where she came from — even if it means occasionally eating mice in an alley or scratching up several chairs in a furniture store. Also, she would be unreasonably good at art.

Catboy tells the story of an art-school grad, Olive, who wishes on a shooting star that her cat could hang out with her like a person. Well, it comes true and antics ensue. Despite the simple premise, the characters are well fleshed out and endearing. Those looking for some epic narrative will be let down — this book is more a collection of short comics than a graphic novel with an overarching narrative — but each chapter goes much further than just centring on a cat-related gag (though there are many gags, to be sure). In fact, Olive is as well-developed a character as Henry, and we often get to spend time learning about how she’s struggling through her 20s, figuring out her sexuality and trying to make rent despite her terrible job. It makes a book about a cat-human much more relatable than you would expect. A couple of recurring plots, such as Olive’s awkward friendship with a guy named Jean, serve to give the book a sense of wholeness despite its slice-of-life nature.

Benji Nate really hit it out of the park with this light-hearted, hilarious comic. Even dog lovers ought to be able to find a scene or two they enjoy.

Catboy perfectly captures much of the fumbling through life in your mid-20s experience that artists go often through. What makes this collection special is the inherent sweetness and charm that Nate approaches the subject matter with makes the reader come to love both Olive and Henry. In a world that is unkind to our protagonists we feel reassured in the knowledge that their friendship will pull them through.

It’s a new kind of punk attitude, one emphasizing sincerity, kindness and openness.

Catboy has an incredible, absurd sense of humor. There are some comics with hilarious punchlines that all play on the fact that Henry is a giant, sort of anthropomorphic cat, but Nate also sprinkles humorous moments throughout the series that often play on the uniqueness of Henry’s situation. For example, when Henry helps Olive haul art out to sell, he proclaims, “I’m never busy!” which is true! Cats are never busy! That killed me.

Catboy has a wonderful, whimsical art style and the stories are adorable. Even though the book seems silly from the outside, it actually has a lot of real-life stories hidden within. Not to mention a lot of really cute outfits.