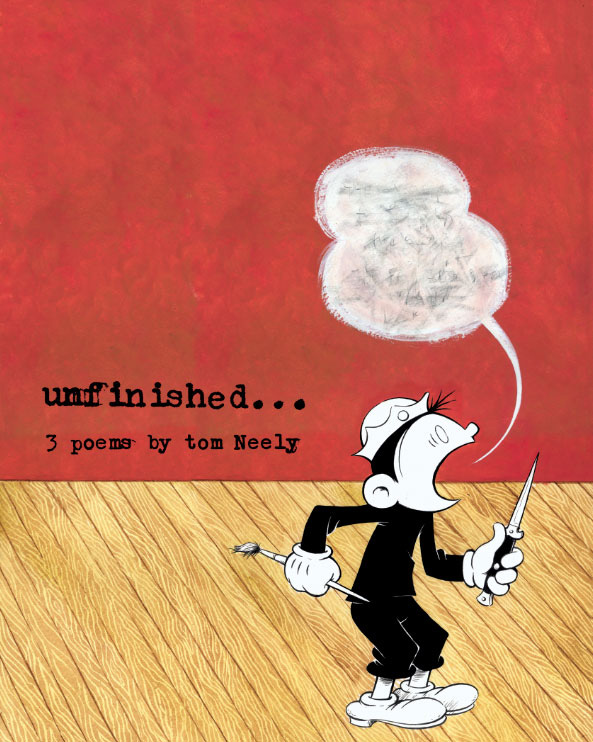 The ideas of these poems sprang out of conversations about Art with Neely’s best friend and fellow cartoonist Dylan Williams (Sparkplug Comic Books) who passed away in 2011. Neely began these pieces as a means to push himself into new ideas of abstract and non-linear, narrative work – to find freedom in the images and the sequences. The paintings shuffled and re-shuffled until they found their sequential voice as poems.

The first poem “I just figured it all out…” digs deep into Neely’s soul to ask why does one make art? “Noise” is a commentary on the loss of faith in the true nature of Art in a modern world that is caught up in a flurry of disposable, candy-coated pop-culture. “Unfinished” is about loss – the loss of a friend to an early death, and finding yourself lost in a self you no longer understand.

Neely wasn’t sure if he wanted to release this work to the public. These deeply personal pieces spanned a period between 2010 and 2013, painted with ink, watercolor, acrylics, collage and tears. To some, this work harkens back to Neely’s earlier surrealistic graphic novels The Blot and The Wolf, as well as his previous book of comic strip poetry Brilliantly Ham-fisted.

An intensely personal and profoundly affecting piece of experimental comics.

Undoubtedly one of the most acutely affecting graphic narratives you’ll read this year.