Your Black Friend and Other Strangers by Ben Passmore 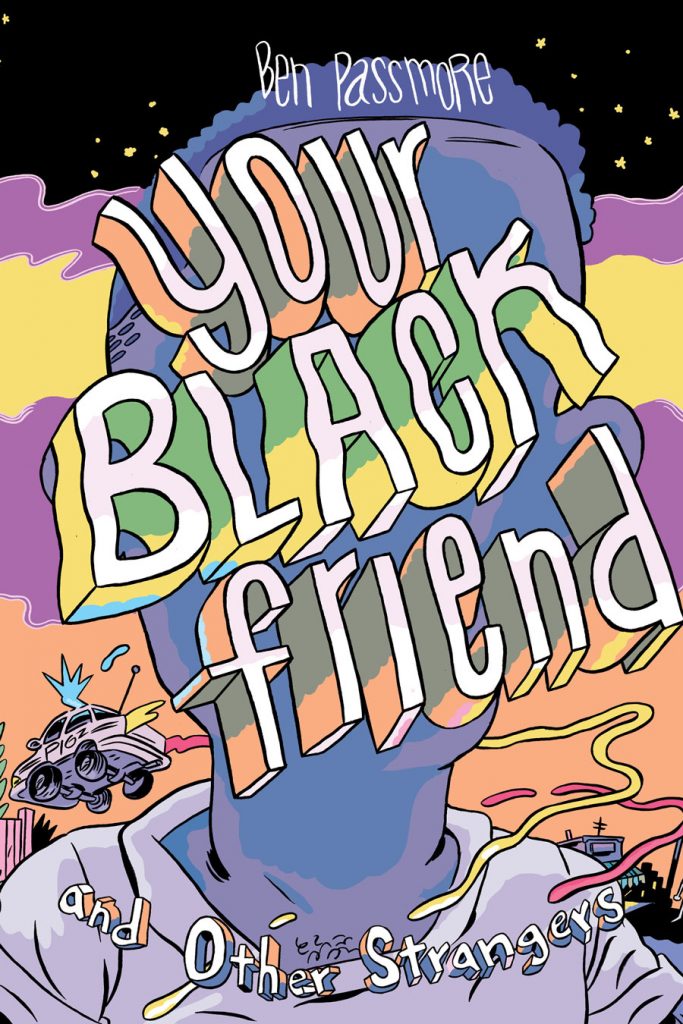 “Your Black Friend,” one of the buzziest comics in recent years, is by a young artist who cut his teeth in the anarchist-punk scene of New Orleans. Reading and discussing Frantz Fanon’s “Black Skin, White Masks” with a friend in 2016, Ben Passmore realized, as he told an interviewer, the extent to which “we, black punks, live in a different world than our white friends.” With a comics festival on the horizon, Passmore, inspired, quickly drew and photocopied his missive of alienation to debut there. The 11-page story was soon reissued as a full-color pamphlet by Silver Sprocket (a tiny San Francisco-based comics publisher that is also a bicycle club and an activist collective) and it snapped up numerous industry awards. Now Passmore is out with YOUR BLACK FRIEND AND OTHER STRANGERS (Silver Sprocket, $20), a beautifully printed collection tackling dysphoria and difference.

Passmore presents an impressive range of work in the collection, which includes impressionistic one-page pieces. The best of these is a first-person meditation on his decision to cut contact with his white, Trump-supporting mother; brief but haunting, it stuck with me for a long time. The book also includes more sprawling sci-fi stories that showcase Passmore’s dense, colorful drawings; he’s clearly invested in genre, and there are echoes of Gary Panter’s fantastically dystopic “Jimbo” comic strip here. “I’m not really a reporter-type dude, I’m really into drawing mutants and people punching other people,” Passmore told Newsarama last year. But as “Your Black Friend” reveals, when Passmore observes daily life — reporting on its own kind of mutancy — his work explodes with force.

Ben Passmore’s Your Black Friend and Other Strangersis a collection, not a graphic novel, but it tells a story and tells it loud. This story, Passmore writes in the introduction, is “about how to be dangerous, how to be a failure, how to laugh in the face of a world that wants to crush us. … And we all fail, homies, it’s OK. We just have to learn how to fail upward.” He adds that “there are a bunch of comics in here that are supposed to turn you into anarchists,” and with that goal he pours out his thoughts on racism, the Black Lives Matter and Antifa movements, hypocrisy, Trump, the police, God and what it’s like to go to jail. He writes lavishly, excessively, piling on observations and theories until he nearly overflows his word balloons.

It’s okay to fail, says Passmore, but “we just have to learn to fail upward.”
The award-winning titular story lays out hopes, miscommunications, and contradictions common in black-white relationships,not omitting static within black-black conversations.
Other targets of this culturally charged satire include white supremacy, activism, Confederate monuments, free speech, pronouns, and punk reparations. Dense, loose-limbed drawings in lush color or black and white.

Ben Passmore is a writer of great nuance and clarity, which is a tough exacta to hit, but he does it panel after panel, with a self-awareness that’s never needlessly demonstrative, and with wit, humor and sharp lines (I mean ‘line’ in two ways there). One hope I have for the reception of this book is that while people are noting how good the stuff Ben has to say is, they won’t neglect to mention that as a visual artist he utterly shreds; reading his stuff, you feel like you’re reading already-classic underground comics. I grew up on underground comics; they expanded my horizons; I know Ben’s work will do that for people growing up on comics in the present-day, and that’s really exciting to me. Anyway, buy this book and read it: it will challenge and entertain you in equal measures.

This contentious volume collects Passmore’s short comic pieces into a powerhouse argument for antiracist action. Passmore attacks not only the overt racism that surfaced during the 2016 presidential election but also the subtler forms of prejudice experienced daily by people of color. Passmore doesn’t disguise his belief that “we all need to be anarchists,” particularly in the multi–award-winning title story. Other graphic essays detail his experience being jailed following a protest, well-meaning political misfires in New Orleans during the controversy surrounding the removal of statues of Confederate soldiers, and the destructive effect of the 2016 election on family relationships, with some dystopian sci-fi and early zine work tucked in for indie fans. He cuts down obvious targets, but also takes to task “establishment lefty groups” for favoring drama over risk, the ACLU for defending hate speech, and Black Lives Matter for choosing respectability over revolution. Passmore’s intimate and funny style buoys his radical argument, that everyone should work to destroy systemic oppression, in this bracing and eye-opening narrative manifesto.

Ben Passmore is one of my favorite cartoonists; his radical comic Your Black Friend, which acts as an open letter about racism, alienation, friendship, and daily microaggessions, is a powerhouse read that was originally published by Silver Sprocket in 2016. This new deluxe hardcover collection will reprint Your Black Friend, as well as Passmore’s strips from both VICE and The Nib. Passmore’s strip for The Nib about Charlottesville and the dangerous idea of neutrality in the face of racism, fascism, and violence stands as one of the most powerful and necessary responses to the neo-Nazi rally and the murder of Heather Heyer. Passmore’s political comics for both outlets are outstanding and a chance to own them in a format you can hold in your hands and enjoy over and over again is frankly exhilarating.

In his introduction to Your Black Friend and Other Strangers, author and illustrator Ben Passmore writes, “I know you picked this book up thinking you were gonna read a whole lot of wokeness from a mad inspired and inspiring melaninated revolutionary King” And I’ll admit, he was relatively spot on for me—I thought I would be reading a collection of comics that would educate me about my unintentional racism and about the lived experiences of Black people in America. Reflecting on that thought, it seems a rather stilted expectation; luckily the collection did that, but had even more to offer.
The original Your Black Friend by Passmore was published as a 12-page zine by Silver Sprocket in 2016. It was nominated for an Eisner, won an Ignatz Award, and made it on NPR’s 2017 list of 100 Favorite Comics and Graphic Novels. Your Black Friend and Other Strangers was republished in March 2018 as an anthology of Passmore’s previously published pieces, as well as some of his new work. In the title piece, which is summarized in this three-minute animated clip, Passmore narrates his experiences as “your Black friend,” navigating the constant spectrum of racial expectations White people have, regardless of whether they view themselves as allies.
Because I can’t describe it better myself, I leave Silver Sprocket’s description of the comic to list the topics included in the anthology: “race, gentrification, the prison system, online dating, gross punks, bad street art, kung fu movie references, beating up God, and lots of other grown-up stuff with refreshing doses of humor and lived relatability.” Also notable is Passmore’s warning in the Introduction that “There are a bunch of comics in here that are supposed to turn you into Anarchists.” My favorite pieces, like “A Letter from Stone Mountain Jail” or “Whose Free Speech?”, were those that were more narrative- or politically based, telling stories of Passmore’s experiences in protests or his reflections on what political movements (e.g., Black Lives Matter versus Antifa) might actually have a chance of making long-term impact. My least favorite were the ones that were most abstract, such as “A Pantomime Horse I” or “Goodbye.” I found myself just confused at the end of several pieces, flipping back through to see what I had missed.

Passmore’s art aligns with the genre of the piece he’s writing. The pieces that are based on experience have a more literal style of cityscapes and corner stores, with large blocks of small text providing background information. However, pieces like “It’s Not About You” or “The Punklord” are vibrant with color and abstract creatures and imagined settings. I like the punk influence of his art—the characters with mohawks, piercings, gauges, and tattoos—as well as just more “realistic” characters with beards, dreads, hoodies, and suspenders. There is some violence and “gore,” but most of that is relegated to the more fantastical pieces of the book. (However, at one point two punks do end up biting, shooting, then beheading a police officer… but when the characters look like they belong in a punk adult version of the 90s Doug cartoon, it’s not as gory.)
Both the art and the writing ask for your attention in more than one sitting. I read the collection in one sitting, and it was a lot to take in. However, I will return to it in bits and pieces. There may be some parts that I never understand, as several other reviewers have mentioned similar feelings, but I know there is much in both the text and the art to appreciate repeatedly throughout the book.
I think this a comic worth investing in. It will be a good addition to a memoir collection, and it’s important to include memoirs by authors of color, especially about the experience of racism and activism in America. It’s likely best for readers who are 13 and up. Even younger teens (13-16) will benefit from reading about and gaining a better understanding of race and friendship, and the importance of activism and standing up against brutality and injustice. Many of the pieces have an elevated vocabulary and an expectation for a baseline understanding of anarchism and nihilism, which younger readers will likely lack, but as is evident throughout this review, the anthology is sort of a “mixed bag.” Anyone can find something of interest, but there will be pieces that some readers don’t understand or are just confused by. Ultimately, if everyone just reads at least the title comic, the world might be a better place.

— Abby Porter, No Flying No Tights

The success of the titular story in this volume brought Passmore a great deal of attention, but the truth is that he’s been at this for a long time. This volume establishes Passmore as a preeminent political cartoonist whose work is also intensely personal. “Your Black Friend” is an unnerving, uncomfortable work about the harmful assumptions even “woke” white people make in general, but it’s also particular to Passmore’s experience as a biracial person of color. Indeed, every story in the book is driven by Passmore’s experience of feeling betwixt and between with regard to race, his status as an anarchist and punk, and his very ability to make meaningful connections with others. His grotesque, cartoonish character design and psychedelic and even lurid use of color allow him to emphasize his ideas while using restraint in talking about them. Passmore is also an incisive reporter and political commentator, offering cogent but hilariously scorched-earth analyses of topics related to white supremacy, capitalism, and respectability politics. This book is an eye-opener at both the conceptual and visual levels.