Previous Next
Interview with Ben Sears 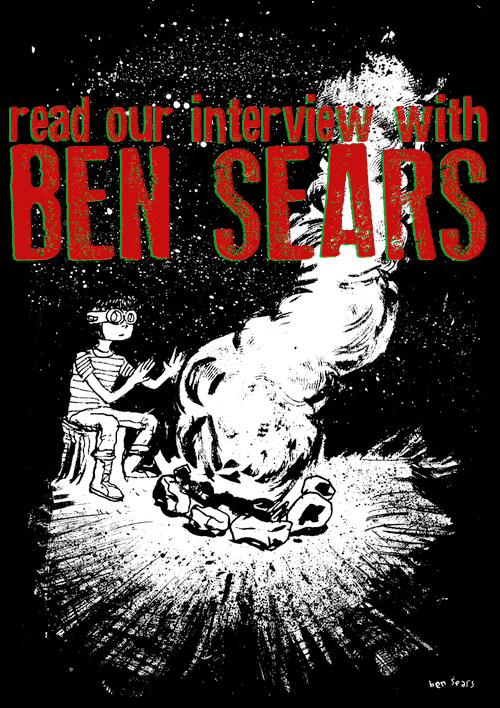 I have been wearing a shirt with Ben Sears art on it for years and only now know what brain it mulched itself up out of. I want a bumper sticker like the I know who grew my food ones that Wavy Gravys in Berkley got, but instead, I know who drew my shirts. The way our weird fucked up punk rock world bridges itself together is pretty kooky like that. Having Ben in As You Were is sick. as. hell. This dude’s art is my new favorite discovery. It has this brooding sick-brained effect like waking up in the catacombs crosshatched with the awe-inspiring “haha! look at all these skulls!” waking up in the catacombs feels. We corresponded with Ben one question at a time in accordance with the visitation rules of space-jail, where he is still serving out a sentence for a crime he may or may not have committed. freebensears.com

How did you get thrown into the big As You Were milkshake?

I’ve been a huge fan of Mitch and his work for a while. For some reason he likes my stuff and keeps asking me to submit things. It’s still an honor to be a part of such an awesome collection of artists. 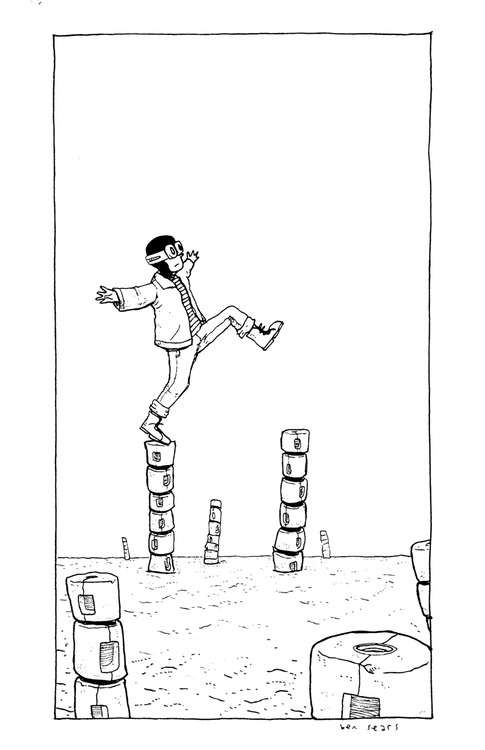 There is this goggle-faced recurring character in your art. I’m trying to figure them out but there aren’t enough clues. Do you have a story, even an unorganized internal one, for goggle kid and where he came from/what he is up to?

Yeah, he’s in an ongoing comic I’m doing called Doubleplus. It’s serialized over at Study Group Comics, and a print version will be out this summer. If I could confidently say that anything in my life is organized right now, it would be my plans for Doubleplus.

Also, skullfaces. What are those guys on about? Are they a signature move like a Stone Cold Stunner, or do they have a backstory?

They were just something that was easy to draw, so I did it a lot and I guess developed a certain look through lots of repetition. 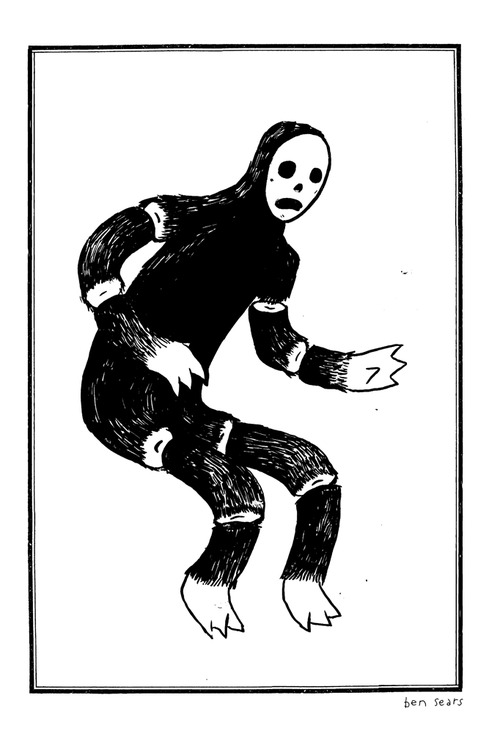 If money/responsibility/time allocation was of no consequence, what would be your dream creative project?

I’ve found through working on Doubleplus that I really enjoy writing, as well as character design. Doing those things on my own is fun enough, but I think it’d be really cool to work on a collaborative project with some other artists. I’ve already compiled a dream team of artists in my head in the unlikely event that it ever happens. 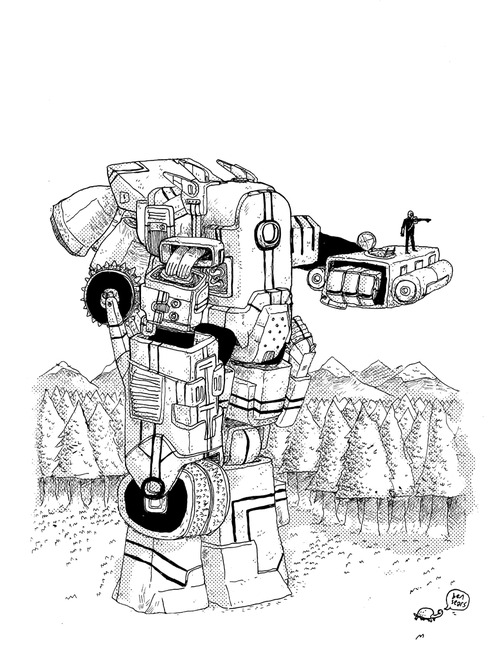 There is a faint but unmistakable Mike Mignola influence in your work. What else, human or fictional, tangible or hippy dippy, do you think shaped the way you move pens?

Hey that’s cool, I’ve never really gotten that before. Mike Mignola is a huge influence, but I think the way I’m drawing now is more along the lines of Akira Toriyama or Edward Gorey. I used to be afraid of drawing lots of characters in a scene, but after watching a ton of Tati, Chomet, and Zucker Bros movies and getting my mind blown by old Jack Davis posters, I view it as an opportunity to go wild with funny interactions or subplots with background characters that come up and resolve over the course of a few panels. I’m still trying to find a consistent voice with dialog, but I really dig how dry (but still really funny) the characters in Jodorowsky and Jason comics are. Maybe it’s something that happens in the translation from another language, or maybe it’s intentional. I really like it though.

How do you think the Tumblr age of instant access to art has affected artist community, fan interaction and chances of success?

It can be great for getting in touch with other artists, or promoting stuff that I make. As far as success, the sad truth is that likes/reblogs do not equal monetary compensation. There are definitely artists out there who know what the people of the internet like, and they service that. Making things with the intention of them being popular on tumblr seems pretty creatively limiting, so these days I draw what I want to draw. If it blows up on the net then that’s cool, but I don’t try and force what I don’t care about. As far as fan interaction goes, I love when people who enjoy my stuff ask me questions that are genuine and thought provoking. I’m not so much into the questions about what kind of pens and paper I use. 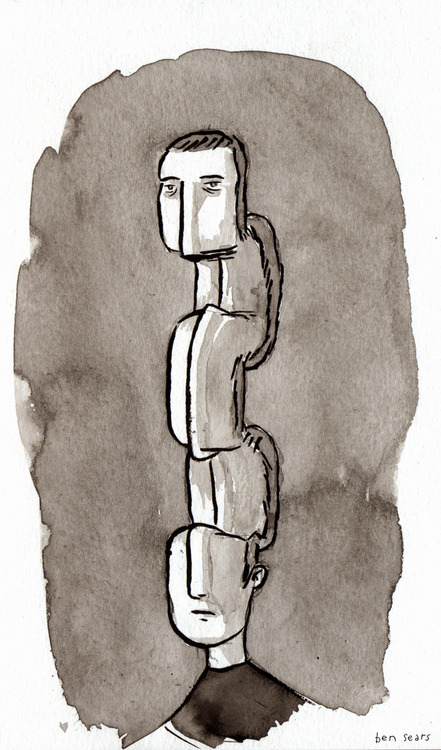 I guess it’s different for everyone. Success for me would be making enough money off my stuff to be able to keep making it and not be worried about losing my ass on anything.

If the internet were on fire and you could only save three things you have ever done from falling out of circulation, what would they be? Anything you would rather leave to burn with all the ones and zeros?

The internet has been around the entire time I’ve been doing the whole semi-professional art thing, and in a way it’s shaped how I make things. It’s a crucial part of how I communicate with clients and stuff like that, but it would be interesting to have it just be gone one day. I imagine I would get a lot more finished. There are a couple drawings from a few years ago that keep circulating around tumblr that I’m not really into. I put them up there, so it’s my own fault, but I’m always terrified an artist I like will see them and assume my current stuff is just like that. 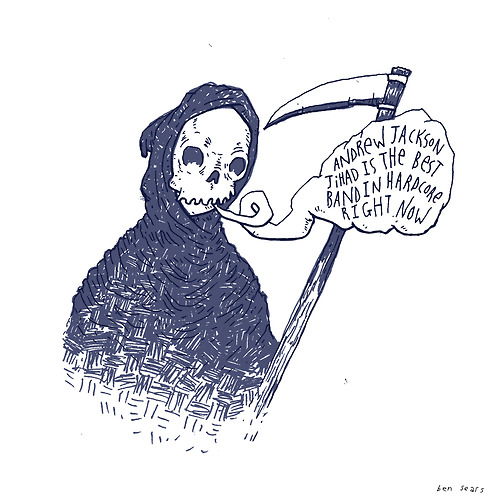 I just finished the book I was reading, any good sci-fi recommendations?

I’m more of a comic guy than a book guy, so I don’t know how much help I’ll be. Ray Bradbury books are always great, though. There are a ton of really great science fiction comics out right now, so you’re in luck. Black Science, Prophet, Nowhere Men, and Manhattan Projects are some of my favorite monthlies. Even though they are all in the science fiction genre, each one is drastically different from the other and somehow are all pushing the boundaries of what science fiction comics can be. They are also all creator owned, which is pretty rad.

Check out Ben’s Tumblr site, DoublePlus at Study Group Comics, and of course, contributions to our very own As You Were punk-comix zines.