Previous Next
Interview with Brian Connolly 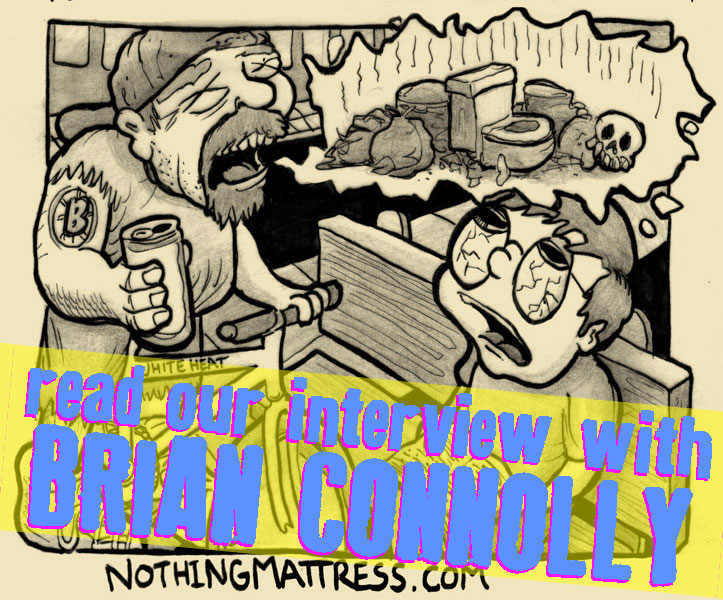 NOTHING MATTRESS is one of the most dedicated punx comics out there, and Brian Connolly churns these babies out on a timeline so disproportionate to their elaborateness that he can’t help but command a respectful head nod. From punx griping to autobiographical vagary to astral plane nightmare town, these comics come out so quickly you’d think he was on drugs or something. We caught up with Brian in his Sepia-tone shanty town in the former Neverland Ranch to try and get the scoop.

Has NOTHING MATTRESS been your dedicated project from the beginning, or did you build up to it? How did you eventually wind up combining forces with the motley crew of other punx artists for As You Were?

I fell into doing a weekly comic as I graduated from art school, which was my only prospect. It started on the website for a Boston newspaper and later started appearing in the paper itself, as well as on my own website and now MRR’s. I was introduced to Mitch Clem and got into As You Were through mutual buddy Liz Prince. 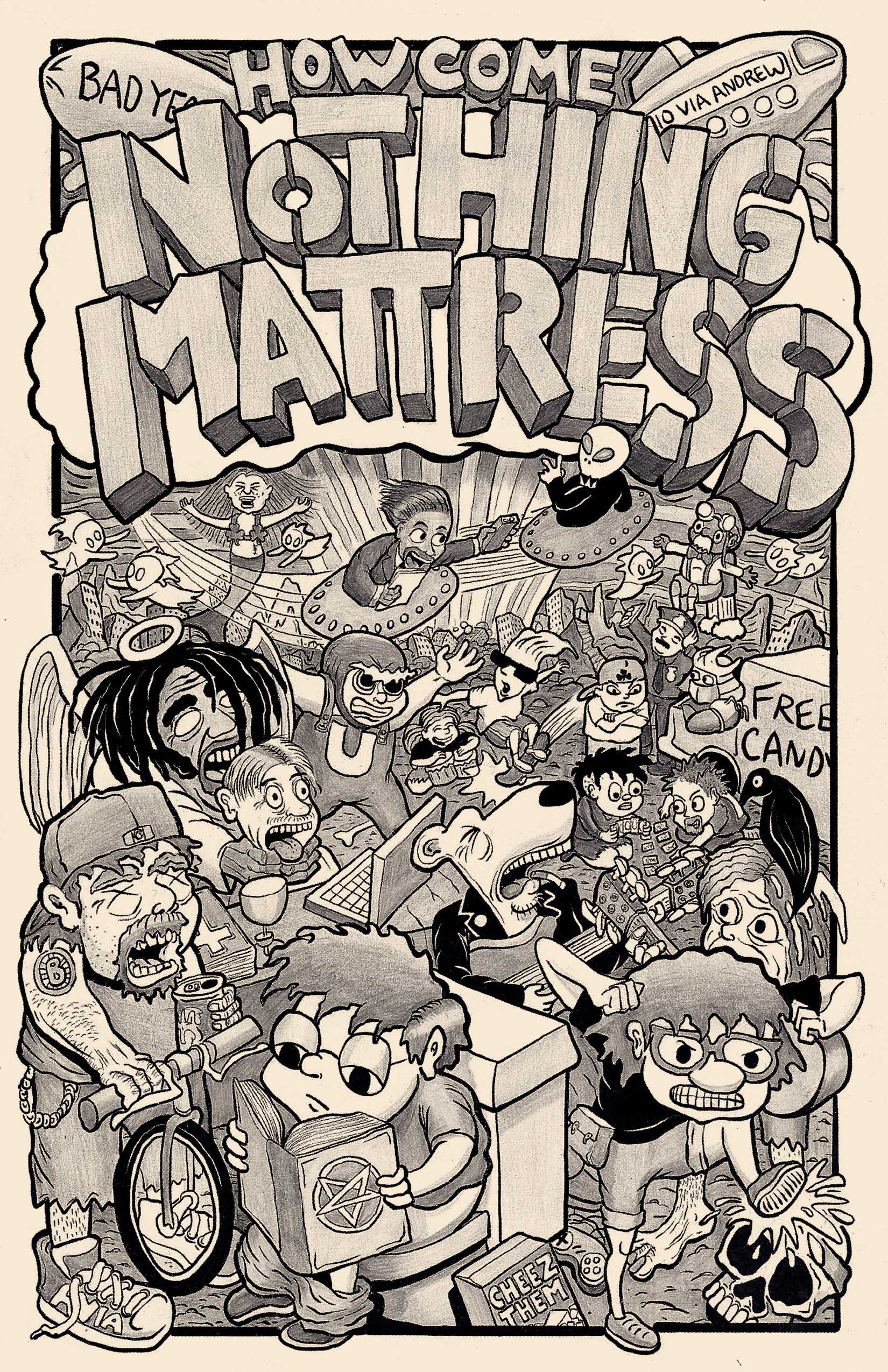 You talk a great deal about drug use in your comics. How has drug use had an influence on your work? What are you favorite and least favorite drugs?

Yeah…my work is psychedelically informed for sure, and I do feel a responsibility to acknowledge the positive role of psychedelics in my creativity. For me, it was crucial in breaking out of a lot of bad programming I got as a kid. I’ve also had a positive marijuana [experience], but have quit using other stuff that was addictive and destructive in my life, mostly alcohol.

Your contribution to As You Were #1 was not only one of the most authentic representations of a terrible goddamn house show, but the narration was made up of the lyrics to an actual song you recorded. Any plans to do another? (Let me phrase that a different way: you should do that again kuz it was dope.)

Thanks!! I’m working on a NOTHING MATTRESS music project, like my comic in As You Were #3 indicates. I’d love to make videos for my other songs, but I’m stretched a little too thin now. But I am playing my first show soon, and here’s another video I made. This one is quick and sloppier, with the panels taken from old comics:

If you wanted to make a playlist for your fans to listen to while reading your comics, what would be on it?

Rancid’s “…And Out Come The Wolves”

That Tim Armstrong is actually the guy from Operation Ivy. 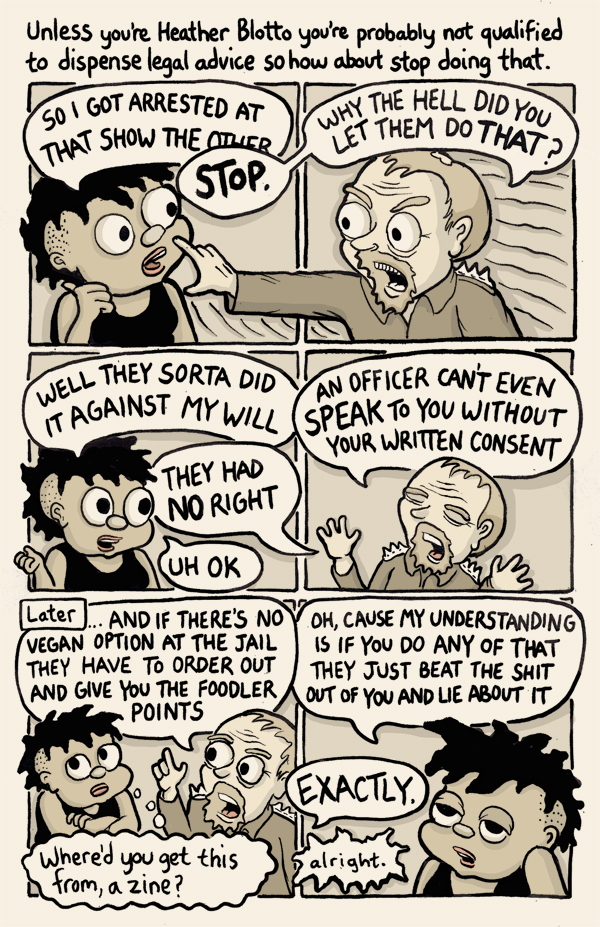 How do you think an age of having instant access to peoples’ comics has affected the artist community/fan interaction/chances of success?

I, of course, love how people can see my stuff easily, and share it easily with everyone they know. And a bunch of fans have turned into online friends, which, while not as cool as real life, is still pretty cool. I’m all for letting people read my comics for free, and hoping enough of them will like [them] enough to buy something. But yeah, all these digital entertainment options probably make that less likely.

What counts as successful when you’re making punx comics anyway?

Seriously!! As far as punx stuff goes, it’d be sweet to have a label/publisher put my stuff out, and to be well distributed by someone more responsible than me. 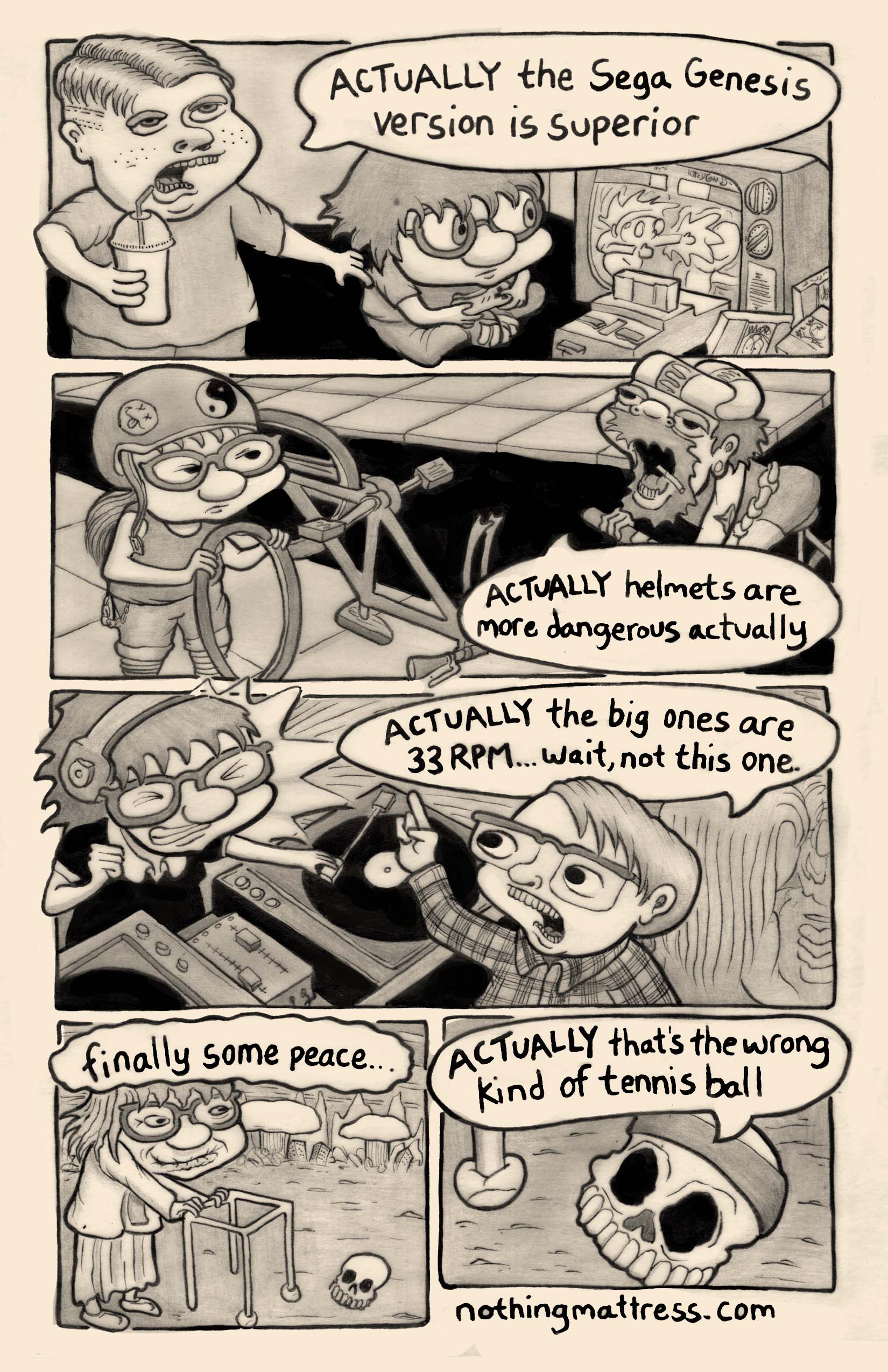 What is your dream project that you would work on if money and responsibility suddenly fucked off and died?

Oh god, I don’t know. Most of my dreams involve just making a living [off] of my creativity. I think I’d make more music videos!!

Have a look at NOTHING MATTRESS, where Brian posts comics, flyers, videos, and more. You can also follow him on Tumblr. Then, if you haven’t already, get your hands on a copy of his zine along with our As You Were punk-comix zines.