Previous Next
Interview with Cake & Comix 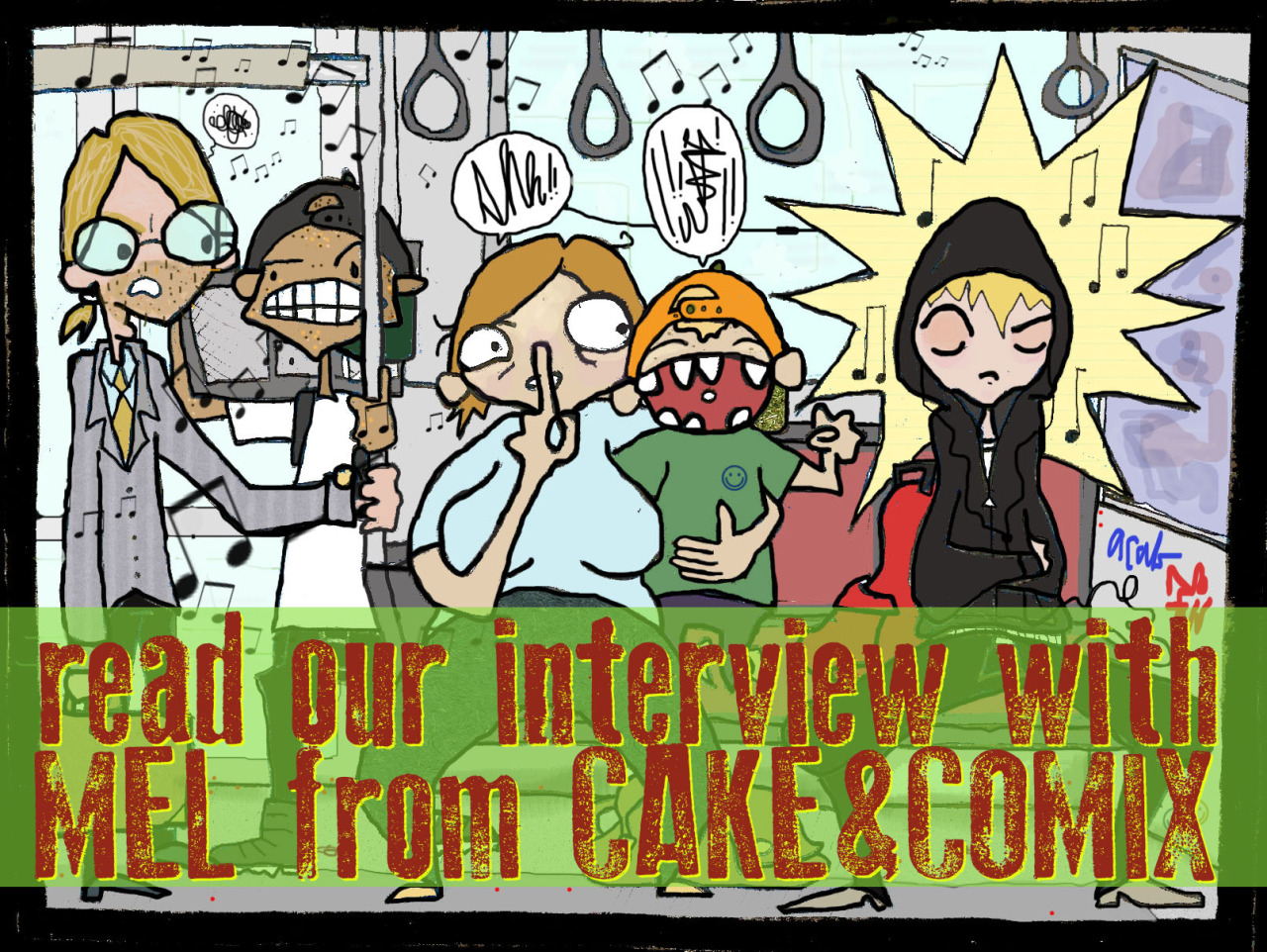 Far be it from us to define what constitutes “good” art, but we do have to admit there is something refreshing about art that is real and just doesn’t give a fuck. For an example, we need not look any further than Mel’s comix, which are sometimes funny, sometimes gross, but always offer an honest, unfiltered world view.

Intrigued? Keep reading to find out about Mel’s artistic process, her projects in the pipeline, and her favorite kinds of cake and cookies.

Please tell us the circumstances that led to your work showing up in As You Were.

I don’t know how I ended up in As You Were. I’m just a scrap kid with a notebook and a fat head. The Silver Sprocket kids must have liked my old Big D and the Kids Table shirt or something, because they asked me to draw a couple pages for this zine. I got lucky.

How/when did you first get into making comics?

I’ve been doing this shit forever. I drew a comic about Osama Bin Laden crashing a plane into my elementary school after 9/11. I was bored. I learned a long time ago that this world isn’t what I want it to be (this world kinda SUCKS). I get to make my own world when I draw comics. Plus, it’s one of the only things I’m good at. 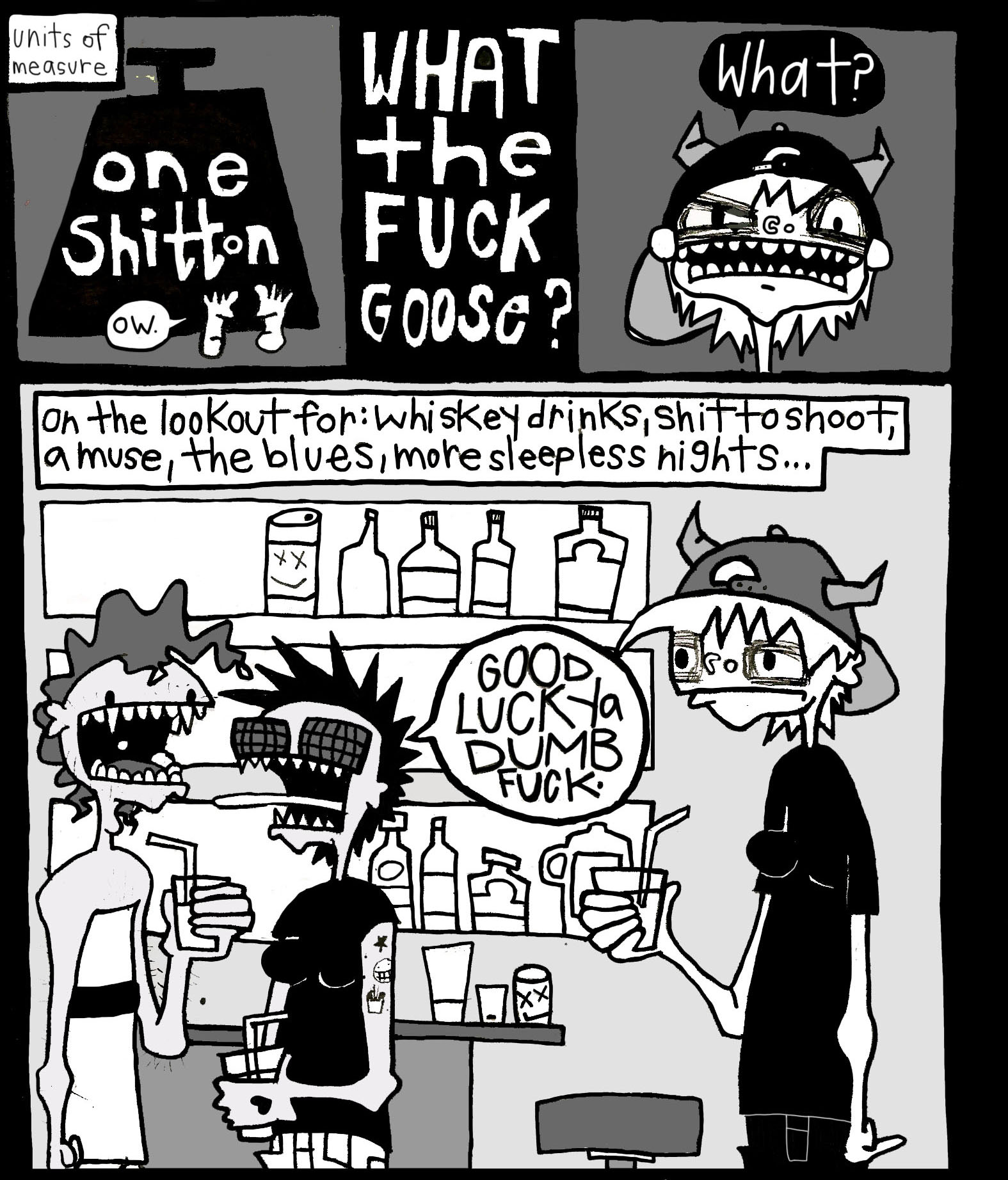 What is your process?

Step One: Fresh tunes.
Step Two: Bong hits.
Step Three: Draw until my hand hurts and I can’t tell the difference between the fibers in my notebook and the vast expanse of the multiverse.
Step Four: Snacks!

What kinds of materials do you use?

What is the deciding factor as to whether your comics are in color or black and white?

My feelings. Sometimes I just need to scribble everything black so it matches my rotten insides. Other times I feel like a rainbow. It’s a metaphor. 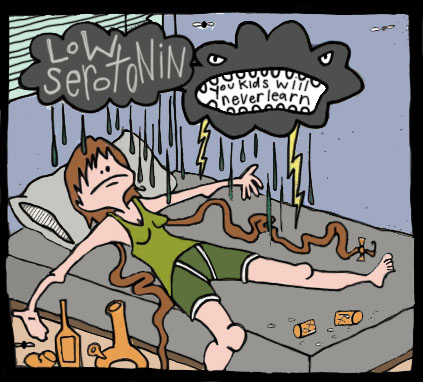 You’ve described your art as weird… what do you think makes it weird? What does that mean to you?

I have it in my head that my art is weird because people tell me it’s weird. I hope they mean weird like it’s quirky and lovable, not weird like bad weird that feeds anxiety and creates nightmare visions. I try to be honest when I draw and write, and that makes my comix raw like a journal entry. We can either look at life as half empty, or as six bars of chocolate and a liter of wine. I just want my lips to be a lovely shade of merlot. I just hope someone can relate.

Is your character Goose supposed to be you or a version of you (or is there another character who is)? If so, how true are you to one another, or do you take some liberties with the interpretation? Where do you get the inspiration for the people in your comics?

Goose is cooler than me, and she’s way less awkward. Sometimes I want to say stuff to my friends but I don’t know how, so I draw it instead. Everything is sort of true, most of it totally made up, and other parts I drew when I was drunk at a bar in the middle of the night. My friends know who their characters are, and I’ll give them shout-outs even when it isn’t obvious. Because I love my friends and it’s my way of telling them thanks for putting up with my bullshit.

You’ve done commissions, and you also have other stuff in the works. Currently, what kinds of projects do you have in the pipeline (this can be stuff you’re working on, or stuff you want to do but haven’t yet started)?

There is so much I have to do, so much I want to do, and a lot of stuff I’ve been putting off and I swear I’ll get to it eventually. I’m in the process of “getting my shit together.” It’s going great actually. I’m feeling really good about it.

-Right now I’m making a zine (Cometbus style) of old and new stuff—something I can send to friends in the mail and barter for beer.

-I just learned how to make those mini-zines, you know, those little ones that are made from one sheet of paper all folded up, and I want to make a lot of them because it’s so fun and easy.

-Also still working on my nipple pin project, trying to make nipple pins from real nipples, because every nipple is different and beautiful and something about diversity and love, so send me pics of your nips please and I’ll make you a custom one wink wink xoxox finger guns. Get all your friends to do it too and we can trade.

-I’m making a cartoon. It’s time consuming and I’m pumped on it. I don’t want to talk about it yet.

-I want to paint a mural.

-I want to plant a garden.  OK, this isn’t an art project, but I still wanna do it.

Where do you make the majority of your art? Do you have a set schedule for when and where it occurs, or does it just happen?

Usually drawing and writing happens when I find the time in between all my other bullshit. That’s why I end up inking all wild and crazy in late-night bars and 24-hour diners. On my days off, I draw in my little room. I call it the Broom Closet, because my building used to be a hotel and my room was, you guessed it, the broom closet. Sometimes I get on a kick and I don’t leave my room for days, and I show up to work a half-hour late all crazy and twitching, smelling like nag champa and pretending that I forgot how to speak English just because I haven’t said anything out loud for a long time.

You’ve admitted to drawing art in the bathroom at Sparky’s. What other business establishments are lucky enough to have your art on their walls? Do you have a bucket list of places to draw on?

Oh yeah, the management at Sparky’s hates me for very good reasons. My friends used to work graveyard shifts there, and nothing good happens after 2am. If you need advice on how to get 86’d from a restaurant, then I’d be happy to help you out. A lot of bathrooms in San Francisco have my art on their walls; if you’re in the city keep an eye out.

When I first started making zines, I used to leave them above urinals at clubs in the Castro. It was funny watching drunk guys holding their dicks and pissing and reading my comics at the same time. A lot of bathroom stalls at clubs don’t have doors. This story sucks. From my brain to the toilet, that’s the natural progression. 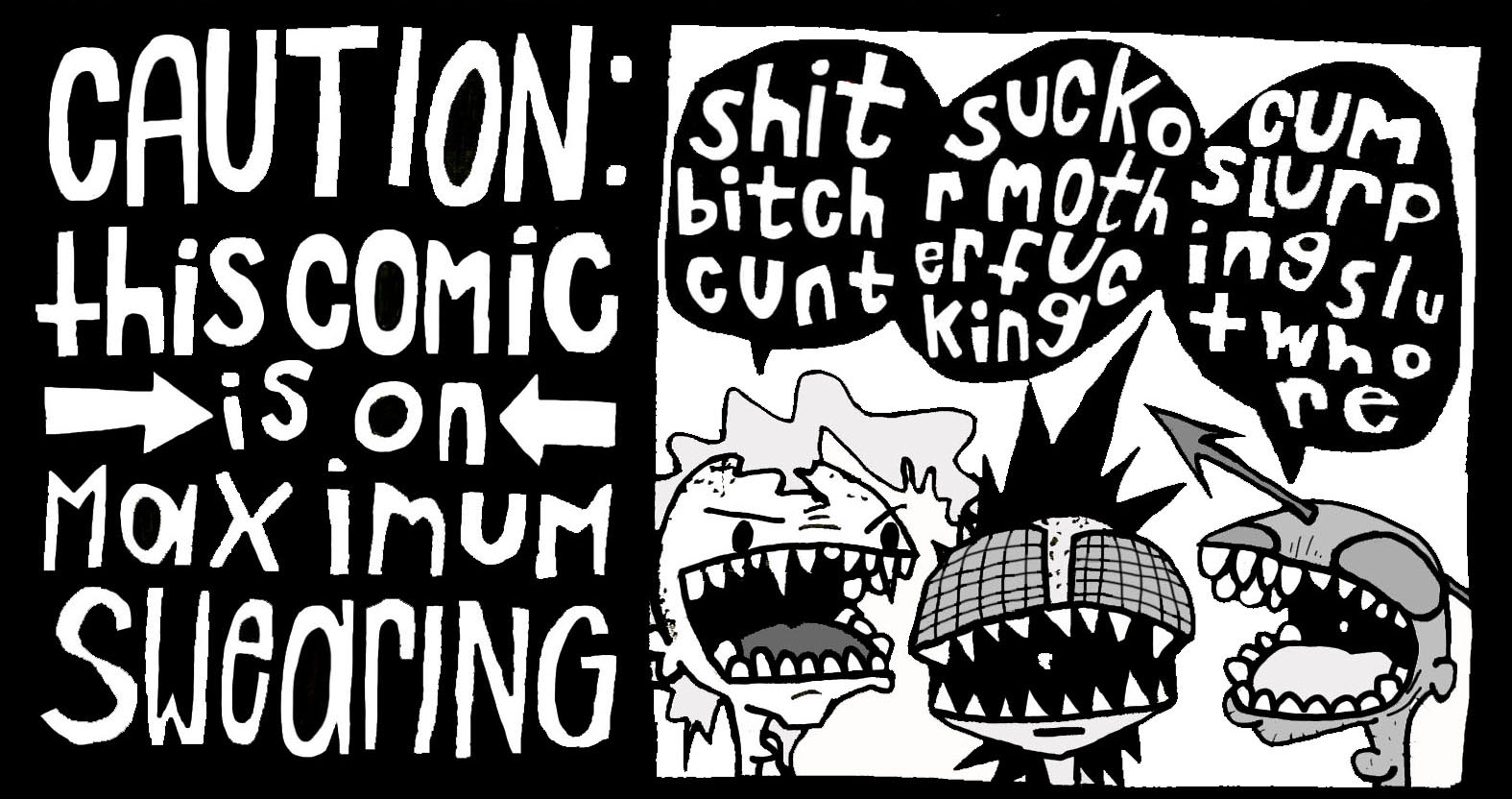 In As You Were #3, your comic talks about some of the changes that accompany puberty. What made you decide on this topic for your contribution? What else can you tell us about it?

Our bodies grow and change everyday. It’s like puberty never really ends. Life is always going to be awkward and gross. We’re all doomed. I thought everyone should know.

Who are some other artists you admire, be they contemporaries of yours or people who made you want to draw in the first place?

Tank Girl was one of the first comic books I read that put dat fire under my ass. I didn’t finish Julia Wertz’s “The Infinite Wait” because I was too inspired to read. I also really like Julie Doucet because she draws freakin’ whippets all over her comics. I admire a lot of my contemporaries but I’m too shy to tell them how I love them so. Making me blush.

What’s your favorite kind of cake?

“Cakes” is a slang term for a nice booty. I’m not saying that’s my favorite kind of cake. I’m just saying that I like carrot cake with white chocolate on top. I don’t need frosting.

Peanut butter. Once I ate two in a row. Once I took a bite of peanut butter and a bite of chocolate fudge at the same time, and that was great.

What are five songs (at least, feel free to get carried away) that would make a good soundtrack to your comic?

THIS IS THE HARDEST QUESTION TO ANSWER IT FEELS LIKE I’M UNDER PRESSURE LIKE THAT DAVID BOWIE SONG.

I made a playlist but it was genre queer and going through a temporal disturbance and was also really long and I’m not going to write it all out but to sum it up I’m just gonna say: 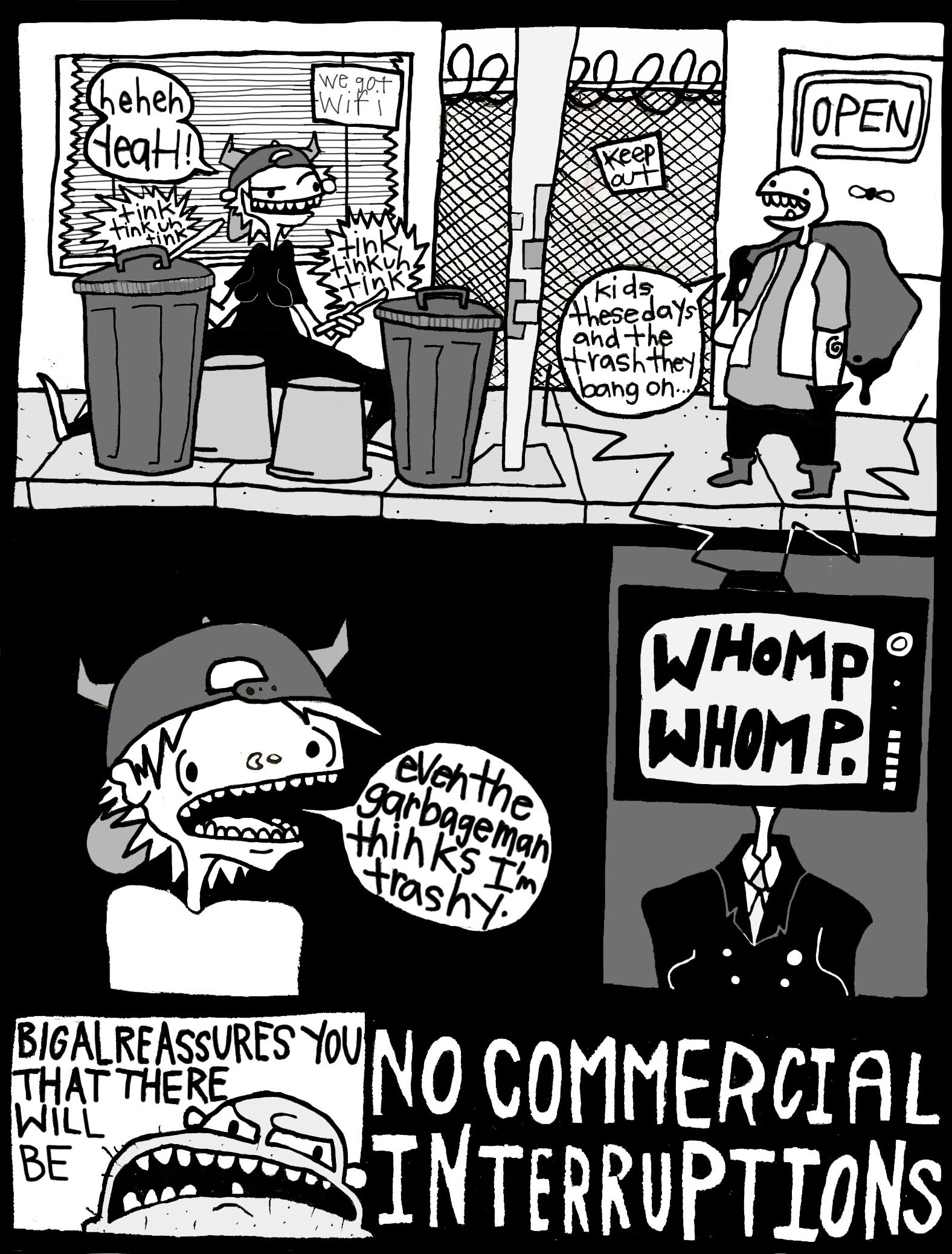 I don’t have any plans to move forward, I’ve just been following my stupid little pipe dreams and my pounding heartbeat and holding onto what I have real tight. It’s gotten me this far at least. Luckily, my friends love me and manage real businesses and want me to work wage labor for them, so I have a lot of odd jobs that pay the rent (I’m that creep sitting at the club’s coat check sketching all the cuties and rubbing my face in your fuzzy sweaters). I want to draw comics, plot the revolution, and listen to music real loud all day, but I don’t get paid for that. Moving forward has been a slow and stoney-bologna process between making money and making art. I nominate myself as the governor. The first thing I’m gonna do is get drunk and abolish the wage system. Ask me this question again in two years when I freak out about losing my healthcare and I have to pay for another root canal ‘cuz all I do is eat cookies and cake all day.