Previous Next
Interview with Alex Krokus 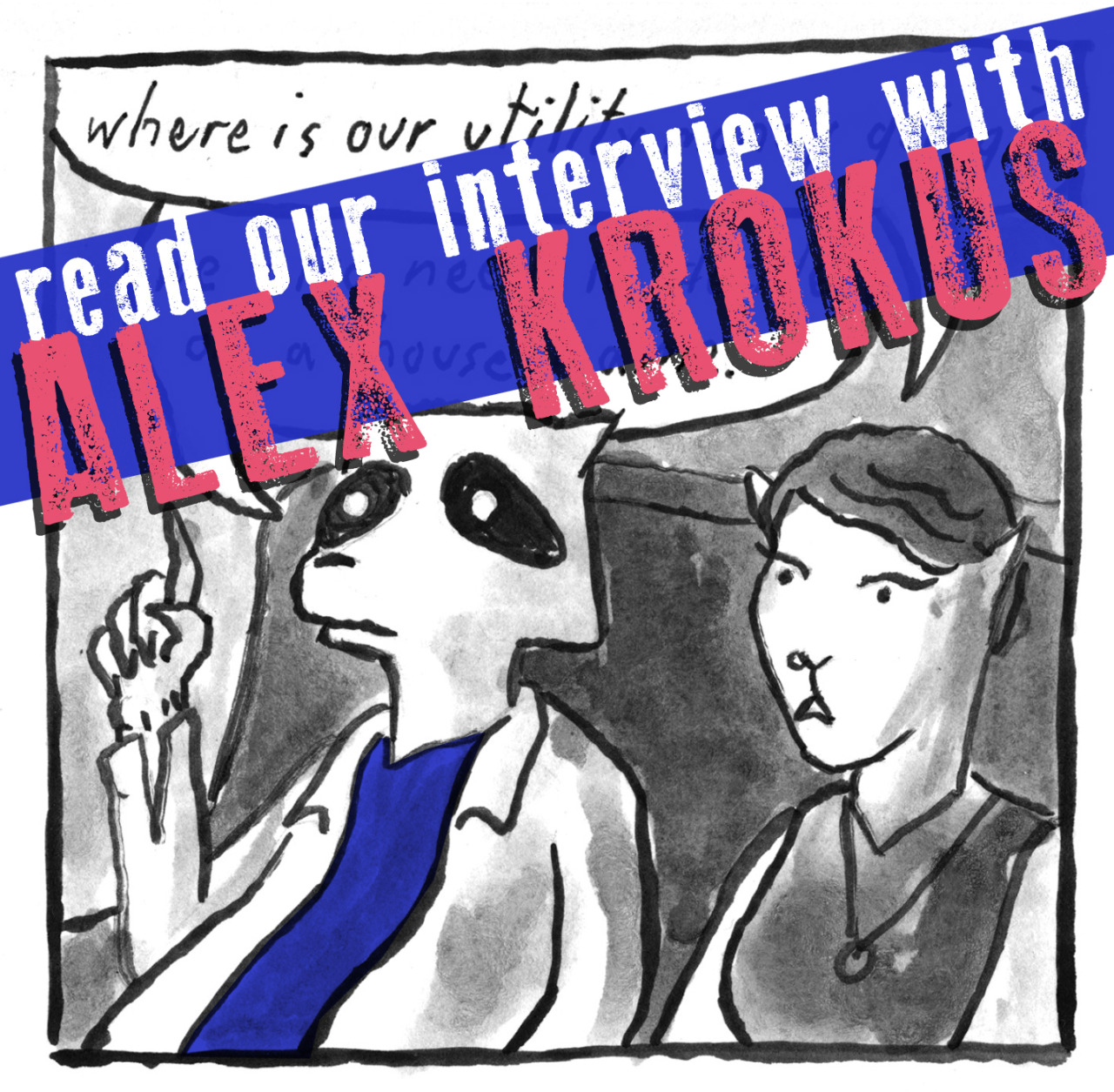 Alex Krokus, like many of our As You Were contributors, is a man of many talents. In addition to drawing comics, he’s played in a band, he made art of people from The Office, his art was featured in a craft beer magazine, and so much more. Read on to discover the other kinds of art he likes to make and find out why he uses animals in his comics.

Up until recently, I was a member of a touring band that traveled around the country pretty extensively. Last year, we went on a tour with Blackbird Raum through the Midwest and we got to talking about making an animated music video together. Naturally, that pulled Silver Sprocket into it and I eventually found out about the AYW series, which my buddy Ben Passmore (creator of DaygloAyhole) encouraged [me] to take part in.

What other kind of things do you do (for work, for art, for fun)?

I think my main thing I’m doing now is animation. I’m a freelance animator and I have a pretty nebulous relationship with it when it comes down to work or fun. They often overlap in ways that are difficult to separate. I also cook a buttload. I get real bougie with it too.

Your contribution to AYW #4 centers around a house meeting and a character wanting to name the house. What are some of the best-named houses you’ve lived in? What is your dream house name?

The only house-house that I ever really lived in was 592 Van Buren, which is portrayed in the comic. There were several names being thrown around all of the time, but it’s hard for a name to stick with a house that has 10+ people, y’know? I think that place is always going to be 592. As far as my dream house names go, they’re all listed in my comic. Usually the kind of folks who name their houses are kinda romantic, so I doubt any of my names would fly.

What made you decide to draw your characters as animals? Do you have other comics where you do this? Is there some sort of differentiation (e.g. animal characters for autobiographical, and not for anything that’s fictional or someone else’s life)?

For me, using animals is a tool for detachment. I think it’s especially important in autobio work where I often feel weird putting lots of work into a comic that is just drawings of me. I’m usually pretty bored when other people do it too. Ideally, I’d like my comics to be read firstly as stories about dopey animals before they’re read as “my life.”

What kind of art do you like to make the most? Is there a preferred medium you like working with? You recently started working with color, correct? What about that? What’s your overall process like?

The purist-art college version of myself would hate this, but I’ve really grown fond of finishing things digitally. I still do line work traditionally for illustration and comics, but for animation, unless I’m doing some experimental stuff I really wanna put the time into, I do it all on my Cintiq. It’s great.

If you had to choose one artistic piece of output of yours (comic or otherwise) that would be representative of who you are to show someone who is not familiar with your work, what would it be (and if you feel like it, why)?

That’s hard. Boiling it down, my work is either comedy or shallow/cool looking stuff. I just did a series of Pokemon gifs that I’m really excited about. And this month, I’m doing a series of 20 comedy bumpers for a new studio called Cartuna, which is coming out really well. Can’t show that yet, though.

What makes you excited about comics / making art in general? How do your life and your comics inform one another?

Lately, it’s been the feeling of getting better. Usually, with every project (comic/illustration/animation/whatever) I try to challenge myself in a new way. The results have been especially good for animation. I’m still relatively new to it, so it’s easy for me to impress myself.

For my comics specifically? You should check out out Daygloayhole, Thunderpaw, and Gingerland Comics.

Now that you’ve got the scoop on Alex K., head over to Tumblr and click that follow button. Then be sure to stop by the Silver Sprocket store to add As You Were: Living Situations to your library.