Previous Next
Interview with Alex Barrett 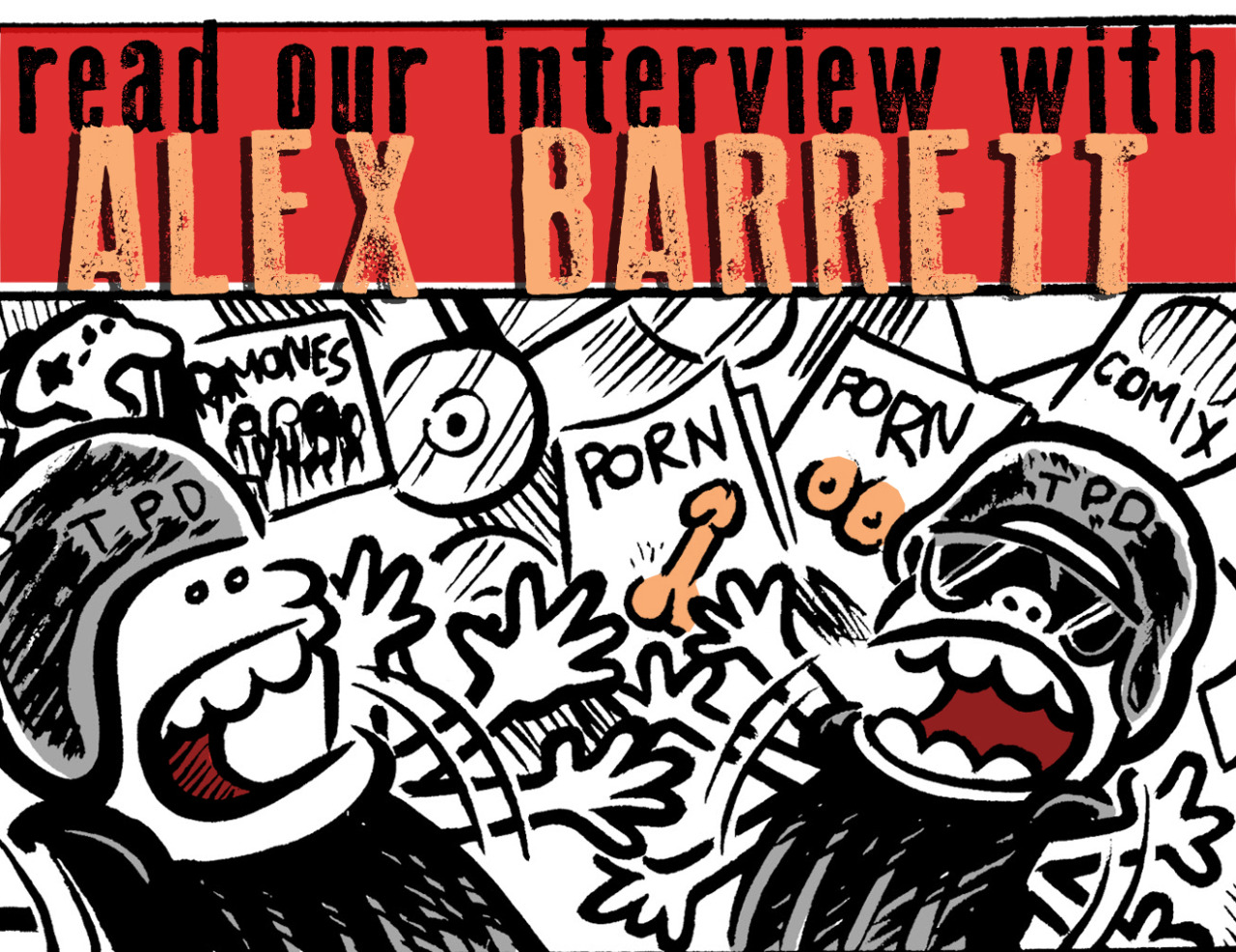 Alex Barrett has been into comics — both reading them and drawing his own — since around age four, so it’s no surprise that he’s well versed in them, getting inspiration from a slew artists whose work spans the past century. But even though he’s got a lot of comic heroes and influencers, his style is unique and bold. See for yourself in this interview where he talks about comic books and video games, punk music, and beer and pinball.

Tell us about yourself. How did you get involved in As You Were?

Getting involved was easy; I received an email invite from Mitch Clem to be in AYW #4 and I responded yes. I’ve been a Razorcake contributor for several years now, [so] I’m pretty sure that’s where he knew my work from. Thanks, Mitch!

So, what I do is mostly work, make art, and hang out with my wife and friends. I’m currently working at a print shop by day and drawing at night and on the weekends. But I also like to go out in public and drink alcohol, beers mostly, and shoot a little pinball. Portland is pretty much the greatest place on Earth if you’re into those two things.

I have an irrational desire to collect comic books and old video games. The comics thing has been a part of my life since I learned how to read, and video games came shortly after, so I’ve accumulated a pretty impressive amount of both (nothing but quality stuff).

Music, of course, is a big part of my life. I go out to see live music whenever possible and, although I haven’t been in a band in a few years, I love playing music, too.

Your comic in AYW is about being illegally raided by the cops. Some of your other comics also seem to have a common thread of run-ins with authority, or a sort of us vs. them mentality. Is that an accurate summary of what growing up in Tallahassee was like?

Technically, they had a fresh search warrant, so I believe that was a legal raid. They were just too incompetent to know that the guy they were looking for had moved out.

But, yeah, growing up in Tallahassee (and later moving back in my twenties), I hardly know anyone that wasn’t arrested at least once. It seemed like the police force was larger than necessary and that resulted in a lot of bored cops with nothing better to do than harass skateboarders and other “suspicious”-looking kids. It wasn’t unusual for my friends and me to get pat-downs by police for simply walking down the street around my neighborhood. I love a lot of things about Tallahassee, but not the oppressiveness. Nazi TPD Fuck OFF!

That said, myself and my friends had little to zero respect for authority and liked to stir up some shit. I liked to have a good laugh at the expense of those who thought they were in control. That same attitude has always been present in my art.

How did you first get into drawing / comics / art? What is your process like?

I think it was probably my public library’s comic book section that got me into comics. I know I was drawing around the same time; I would have been about four years old.

My process usually starts with me jotting down a quick idea in my sketchbook—typically a barely decipherable sketch. I then draw it onto a sheet of bristol board. I use India ink and a brush over the top of the pencils for the final line art. Then I scan it, clean it up, and color it in Photoshop.

I love black and white art. It’s the most striking to me, but most of the time, my clients want color. The palette is usually the last thing I choose. I’ll start off drawing and thinking of one color scheme but, in the end, I’ll mess around in Photoshop and turn up with something completely different than what I envisioned.

I’m determined to do more comics in 2016. It’s hard to make time for comics since I usually take any illustration work that comes my way (because $$$). I think I can do it this year, though. The plan is to work part-time at one or two jobs and free up an extra day a week for art.

Also, I’m going to print up some of my t-shirt designs. I need to hone my screen printing skills in order to print decent stuff on my own. I’m looking forward to taking some workshops at the Independent Publishing Resource Center for that.

You list your influences as punk rock and (weird) comic books. If you had to curate a playlist of music to accompany particular comics, what would that look like?

A lot of your art is music related, i.e. logos for bands and posters for gigs. How do you come up with ideas for them? Do you have input from the bands or are you given free reign?

I’ll listen to a band first if I’m going to do some work for them. Ideas come from their style or maybe their name or song titles.

I generally get free reign or very little input from the band/venue/promoter if there’s not much $ involved. If I’m getting paid well, I’m at the mercy of whatever the client wants. I like it best when I can take a little nugget of an idea from them and expand on it, giving back something even better than what they had initially pictured.

I printed a mini-comic called Junk Shop a few months back. It has an assortment of comics and art in it that I feel pretty solid about. It’s black and white with a neon green cover and has some collage and photo elements mixed in. I tried to give it the kind of mysterious and trashy vibe that I’d get as a kid from underground zines and comics that I discovered (pre-Internet). My younger self would be into it.

Ooo, that’s a tough one, but I gotta go with the NES.

You can get yourself a copy of As You Were: Living Situations right over here. In the meantime, if you like what you read (or saw), be sure to follow along with APB’s artistic ventures.