Previous Next
Interview with Steve Larder 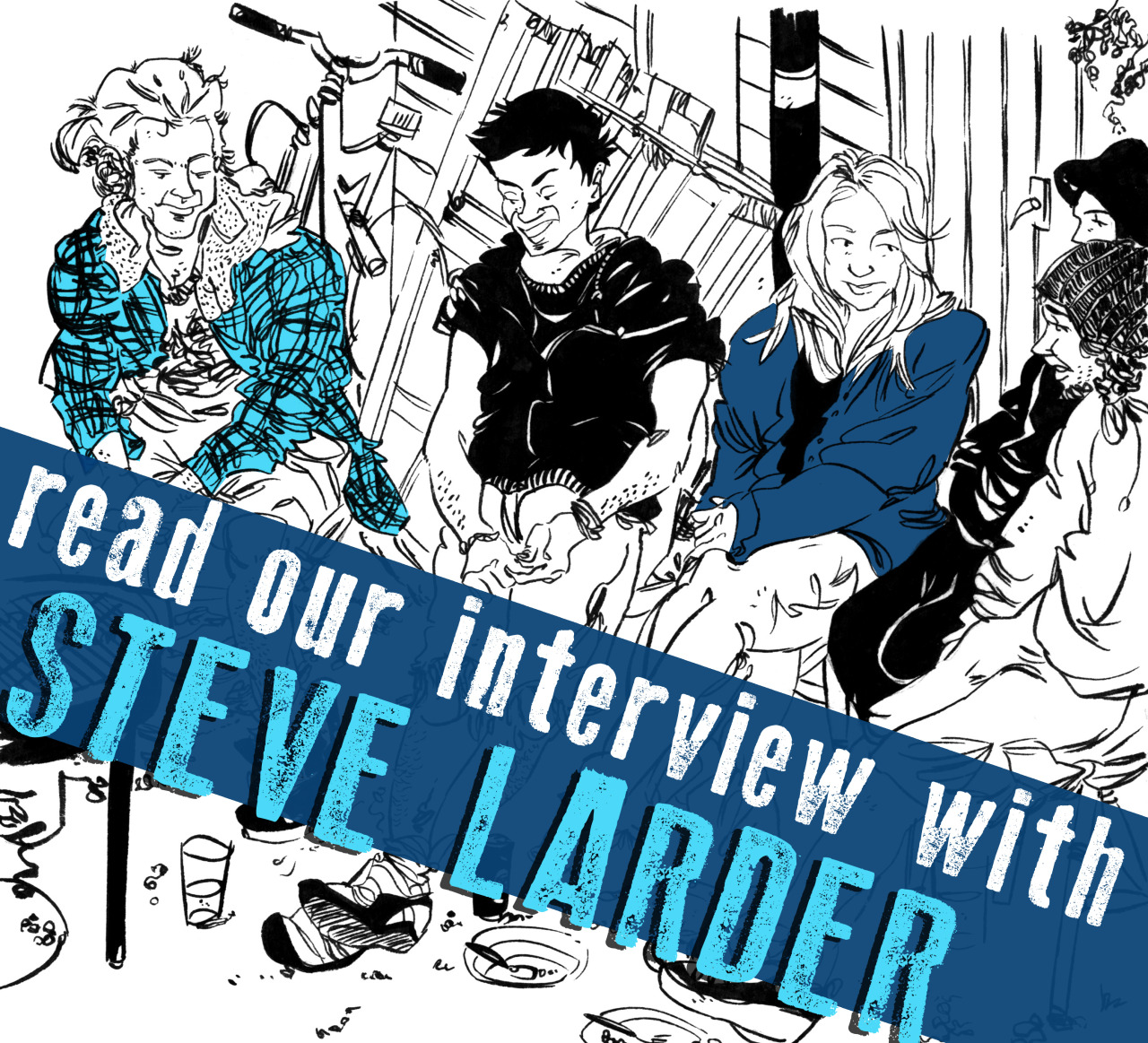 It was around this time last year that we talked with Steve Larder, one of the As You Were regulars, so we figured it was about time we found out what he’s been up to since. Hint: it involves making art, playing music, and traveling. Keep reading for the specifics.

Well, I managed to bust out three issues of my zine, Rum Lad and it’s made me think about how I approach zine making. Older issues would sometimes take months and months to complete, but in February ‘15 I decided to scribble something together on my work lunch break and the majority was done in about half an hour. It’s definitely scrappier but seemed to go down well.

I played a lot of gigs in the UK as well as in Europe (including Supersonic Festival in Holland), recorded a bunch of songs, and even The Copy Scams managed get together and play! In the summer, me and my partner, Tanya, flew over to the USA to visit some mates (Alex of Brain Scan zine and her boyfriend, Paul) where we all leapt into a car for a road trip over to Yellowstone National Park for some sightseeing. It was a real good treat.

In the newest AYW, we learn about your time living with a bunch of hippies. At the very end you appear to have assimilated as one of them, with your Hawaiian t-shirt and Birkenstocks. Did any of their hippy ways rub off on you? What aspect of your behavior/personality would you say is the “most hippy like?”

Well, I was with my brother the other day and he commented that I had a bit of B.O., so apparently I’ve inherited some hippy funk along the way since leaving that house. Gonna start washing extra careful under those pits since that enlightenment.

A lot of your prints deal with themes of the environment. What is it about this topic that interests you?

I just like drawing places; it’s as simple as that really. I’ve always enjoyed getting lost in details, and when you’re drawing forests, that’s pretty easy to do. I’m also a mere train ride away from beautiful Peak District scenery, so I’ve got fairly easy access to landscapes that have a lot of folklore attached to them.

You also seem to draw a lot of storefronts—bookstores, record shops, restaurants, etc. Do places have to be architecturally or visually interesting, or do you choose them more based on businesses you go to a lot/support?

A bit of column A, a bit of column B. Most of my work is in reportage illustration so I tend to keep an eye out for visually interesting buildings and what have you.

Some of your work appears in an adult coloring book, “Colour Me Bad.” Tell us about this.

The editor wanted work of mine that could be defined as “stressful,” and I had plenty of illos of busy streets and city environments, where it could be argued that they’re inherently anxiety and stress-inducing. I’ve never colored anybody else’s work, but if people are into it, I don’t have a problem, obviously.

If you had to choose one artistic piece of output of yours that would be representative of who you are to show someone who is not familiar with your work, what would it be?

I suppose the more recent issue of Rum Lad. I reckon it’s got a nice balance of my more “realistic” and comic styles.

2016 has some travel plans and a new issue of Rum Lad, where I’m going to attempt drawing something that’s been a part of my life for a little while now. I can’t be more descriptive than that at the moment!

I would have to encourage people to check out Jack Fallow’s work—their comics and artwork are always riveting and relatable.

If somebody asked me what my favorite Neurosis album was, I’d probably talk for hours and hours. The answer would probably be like an essay. Maybe I should make a zine about it?

Now that you’re as stoked on the forthcoming Rum Lad as we are, check out Steve’s art, buy a print or two for someone you love, and order your copy of As You Were: Living Situations.