Previous Next
Interview with Steve Thueson 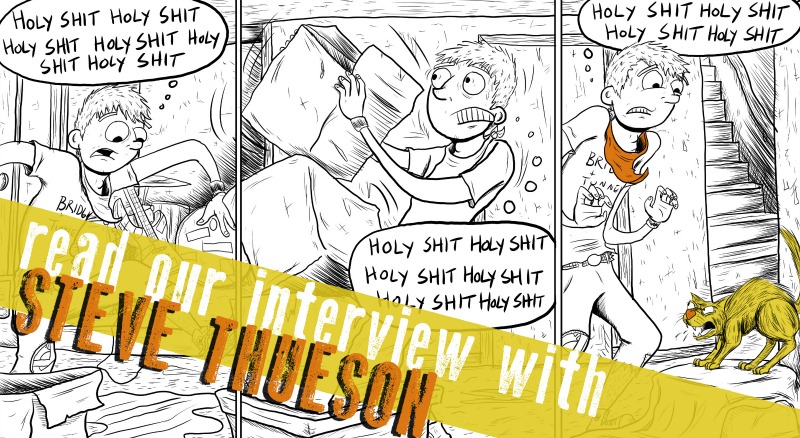 As You Were contributor Steve Thueson gets mega-honest with his comic about that fateful day back in July 2009 when he almost had sex for the first time… and when a musician playing solo acoustic ska covers made it so he didn’t. Read on to find out more about what happened, and what he’s been up to since.

Hey! Well! I’m from Utah, and up until last August, I was living in Salt Lake City, playing in bands, drawing flyers and comics, and working at call centers. But now I’m in Vermont getting an MFA at the Center for Cartoon Studies, which is real real cool but also real real different.

Mitch Clem, for whatever reason, asked me to do a comic for As You Were #4, which was probably the best email I’ve gotten in my life. I was a super fan of the first three issues of AYW and everyone involved, and was, and continue to be, incredibly stoked that I got to have a comic in there. 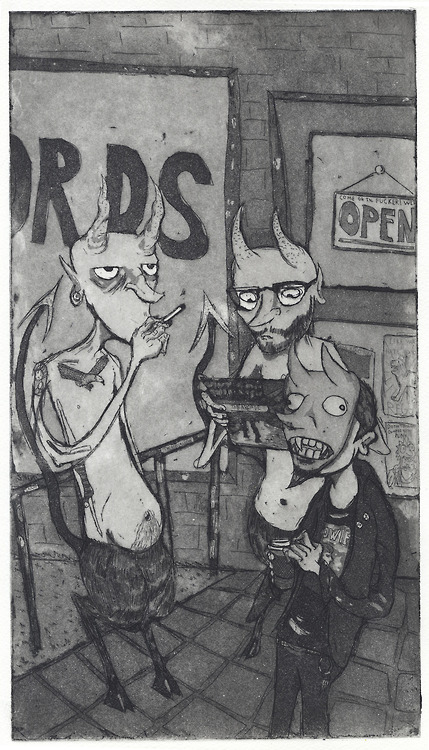 You studied English and Printmaking in college. What made you decide to pursue these degrees? How do they inform the work you do (in obvious or not so obvious ways)?

I did! Both degrees were pretty much just ’cause I wanted to make comics. Like, I figured studying fine arts would help me draw comics better, and studying English would help me write comics better. The school I went to ended its Illustration program the year before I got there, so I majored in Painting instead, which I was awful at. After a year of that, I switched to Printmaking because I had friends who were into screen printing and it seemed really rad, plus I felt like the more cartoony style I had fit better with prints than with painting.

I think I learned a lot about composition, using black and white, and visual storytelling doing prints, which has been really helpful for comics. I mainly did Intaglio printmaking, which is the longest, slowest process in the world. So I got used to sitting and drawing and listening to podcasts for hours, which is my favorite thing to do now.

Re: podcasts, I like, almost exclusively listen to comedy and movie podcasts. Comedy Bang! Bang! is great; Hollywood Handbook is my favorite; The Dollop rules; We Hate Movies; You Must Remember is a super interesting film history podcast. Any time I try and venture into podcasts about important things I just can’t do it.

Right now I draw almost all my comics on a little desk in my room that’s covered in coffee mugs and pens and action figures and is right next to my bed. Since I’m going to school for comics right now, I kind of have to make them regardless of if I’m inspired. But even before that, I’d get really antsy if I wasn’t working on stuff, so I try and draw or write every day during any free time I have from work or school. Which involves a lot of me rewatching The Office while I draw.

What is this Making Coffee webcomic series of yours about? It looks like you stopped in 2014. Will you pick that back up again? Also, it looks like Hell Fight is a current project of yours. Tell us more please!

Well! A few years ago I read The Life and Times of Scrooge McDuck by Don Rosa, which is one of my favorite comics ever, and I started drawing myself as a Scrooge-style duck, like, constantly. Basically every print or drawing or whatever I made around that time was a duck version of me doing something. And also pretty much all the comics I had done up to that point had been autobiographical in some way. Like, I had never really done a purely fictional comic that lasted more than a page or two. So Making Coffee was me trying to write something long and fictional that starred an anthropomorphic duck. And it was cool and fun to do, but I think the scope of the story I had in mind was too big and long for what I was actually able to keep up with, and I got kind of burnt out and unsatisfied with it and stopped on a real cliffhanger of a comic. So I’m not sure if I’ll pick it up again or not. I think I might use some ideas I had written down for some other stories, but I also miss drawing ducks all the time. So who knows!

Yeah! HELL FIGHT is what I’m doing right now in between projects for school. It’s a totally silent comic about a kid who gets transported to hell and has to fight a bunch of demons. I’m doing it kind of in the opposite way that I did Making Coffee, where it kind of just goes right into it without a lot of build up. So, like, there’s sword fighting demons pretty much right away. I think it’s a good time! 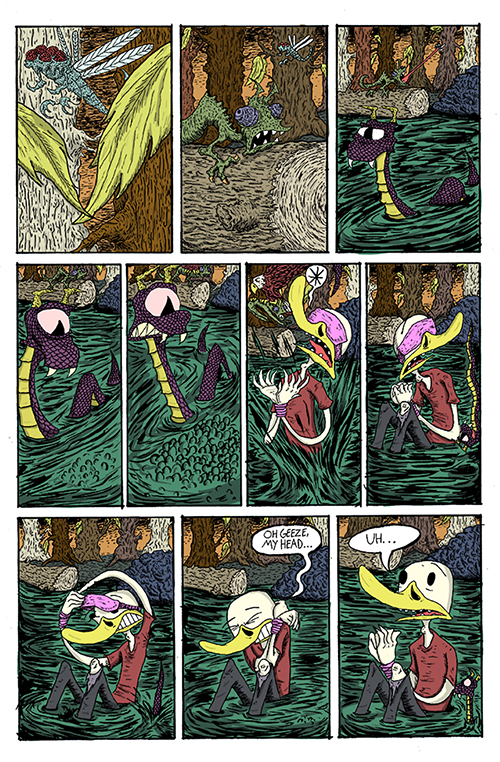 Your contribution to AYW is pretty hilarious, though it probably wasn’t for you at the time. We really loved seeing a glimpse of the different people living in the same house as you went room to room thinking “Holy Shit” non-stop. What more can you tell us about that living situation? And who was the musician playing that show?

Thanks so much! I’m glad you think so! That story’s set at the Boing! Anarchist Collective in Salt Lake, which is a rad house that’s been around forever, and that I’m pretty sure every punk in Salt Lake has lived at at some point or another. I lived there super briefly, but went to shows and hung out there all the time, especially around 2008/2009, which is when the comic’s set. So it was really fun and weird looking back through old photos and stuff to remember who was living there and hanging out at the time and what they all looked like.

That summer, Boing! had shows pretty much every single day, and that was right at the beginning of a weird time in Salt Lake where a bunch of bands had broken up or were taking breaks. So instead, the members of these bands were all starting solo acoustic projects. The show in the comic was this kid Henry who played in the ska band Illegal Beagle, doing, if I remember correctly, mainly acoustic versions of Illegal Beagle songs and then also a cover of “Hope.”

That house is still around and having shows with a lot less acoustic Descendents covers. Check it out if you’re in Salt Lake, pals!

What does 2016 look like for you? Will you be publishing or releasing anything? Is there any new direction you want to experiment with?

I’m not sure, honestly! I mean, I know I’m going to be doing some more illustrations for Razorcake, and I’ve got one more year here at CCS. I’m gonna keep HELL FIGHT going for as long as I can, and I’ll be updating more regularly when the semester’s over.

Last year I came out with a month-long journal comic, and since then I’ve been trying real hard to not do anymore autobiographical stuff and instead just work on fiction. I’ve got some ideas for the rest of the year, but not really have anything worth announcing. So I guess check out my li’l Tumblr, pals!

Oh! Also, I grew a mustache this year, which is the 100% most controversial thing I’ve ever done in my life. 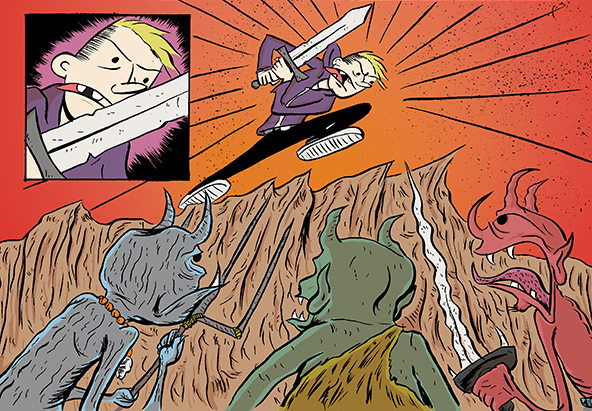 That’s tough! I think my comic in As You Were ‘4 would be good, honestly. Like, I think the art and the humor in that comic is pretty representative of what I want to do and what I think is funny.

Maybe if you could look at that, and then look at HELL FIGHT, and combine the two in your mind so that instead it’s a demon that’s nervous about having sex. That would be good. I would make that comic.

My friends and I used to do a zine called Driven that was all about punk in SLC, and we’d always ask people in interviews if they liked Crush or Sunkist orange soda more. And y’know what? I like Crush! It’s the best orange soda! 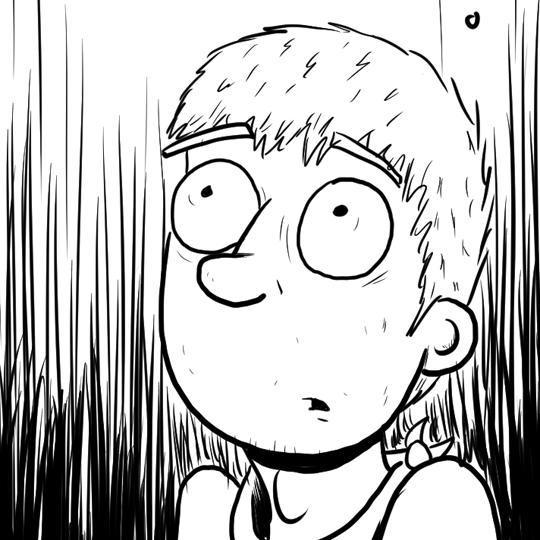 Psst: Follow Steve on Tumblr for the latest and greatest of his work. And hey, by the way, don’t forget to buy a copy of As You Were: Living Situations.