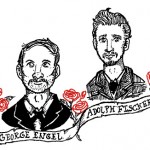 USA Anarchy History – check out this piece by Fiona Fick!

This illustration depicts four of the seven Chicago anarchists convicted for the May 4, 1886 Haymarket riot, in which a strike for the eight-hour work day was disrupted when a dynamite bomb was thrown at police officers trying to break up the public forum. The blast (and resulting police gunfire) caused the death of four civilians and seven police officers and wounded others. Although there was no evidence that the seven anarchists convicted had thrown the bomb, the city of Chicago charged them with conspiracy in an effort to further demonize the labor, anarchist, and immigrant communities. Of the seven anarchists convicted, Samuel Fielden and Michael Schwab’s sentences were reduced to life in prison, and Louis Lingg smuggled a blasting cap into prison and blew his jaw off rather than being executed by the state. The folks pictured here – Albert Parsons, George Engel, Adolph Fischer, and August Spies – are those that were hung on November 11, 1887.

We’ve screen-printed this onto a limited batch of prints, patches and stickers available here: http://silversprocket.gostorego.com/fionafick.html