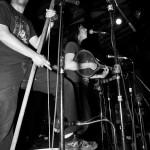 You know BLACKBIRD RAUM is on tour right? DO SOMETHING!
And come back in a few hours for their new video that’s gonna make you laugh your head right off and kiss a hummingbird