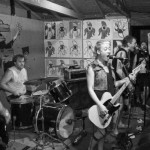 Hey RVIVR is going on tour around europe! Avi got kidnapped the other day and the CIA told us he is being held in a village between Albania and Hungary. Maybe if he gets out he can go to one of these shows. Chin up bud!