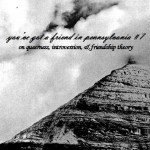 [img: a black and white photo of the side of a mountain with heavy clouds overhead. black text over top reads, “you’ve got a friend in pennsylvania #7 / on queerness, introversion, & friendship theory”.]

you’ve got a friend in pennsylvania #7: on queerness, introversion, & friendship theory

since moving to a state i hate roughly a year ago, i’ve been kind of a hermit. i rarely go out while home and when i do, its to places i already feel comfortable in to see people i already know. as time has passed in my self-inflicted solitary confinement, i’ve been preoccupied with thinking about what friendships mean to me overall. in the 5 sections of this zine, i try to hash out my thoughts on the process of making and keeping friends, how my various identities intersect and affect my friendships, the spaces in which friendships are cultivated or cut off, and how i can improve my friendship skills. this zine is B&W, ¼ size, 38 pages, & text heavy. US$2.50 (price can be negotiated). [etsy / snail mail & other arrangements] note: this zine will debut at chicago zine fest – any copies not sold there will be mailed out to the first etsy orders & messaged requests.

i like being alone (just not all the time) / intro

What if we applied our childhood methods of friendship and knowledge-sharing to our current lives? What if we broke down the practice of cultivating certain abilities and qualities in friendships with the aim of utilizing them in monogamous relationships? What if our culture valued friendships the way it values romantic pairings (as an aside, I could find hardly any songs across a variety of musical genres that dealt with celebrating friendship instead of sexual interest)?

I. the myth of a good friend

on achieving the label of “good friend”

The idea of being a Good Friend is often dependent on how selfless and accommodating you are with others, and this is problematic for a whole lot of reasons, including using one’s friendship as an excuse to manipulate or guilt someone and the fact that many people are unable to communicate their boundaries as far as being capable of taking on the problems of others on top of their own.

Unfortunately those of us who had a hell of a time surviving social situations as queer people end up building up cliques and establishing borders surrounding the communities that are often seen as threatened by outsiders; as if queerer-than-thou mentalities and social functions with judgmental foundations are somehow consistently wary of Trojan horses pregnant to the brim with posturing straight people or queer folks who don’t fuck enough.

II. a sober introvert’s conundrum: go online or go out?

But as I’ve been digging deeper and deeper into my feelings about my own gender and gender in general, I’ve released the tight grip I had on my beliefs that decorating my body or vocalizing certain interests would automatically put me at risk for being misgendered—and unfortunately a big factor that helped me do that was coming to the sad realization that I’ll be misgendered no matter what… Feminine body markers have always been a means of starting conversations or breaking the ice with women and non-binary folks and I no longer want to let the fear of being misread keep me from any additional opportunities to make those kinds of friends.

on my sobriety intensifying my introversion

I don’t want to continue seeing bar culture/non-sober spaces as some kind of duality between being comfortable yet by myself versus having companions in a potentially hostile atmosphere. It’s also been really difficult feeling like I am completely complicit in my introversion as well as my discomfort with alcohol. A part of me feels like I have to go along to get along and that it’s no use being critical of bar culture because nothing proactive will come out of it. It’s much easier telling myself that I wouldn’t meet anyone interesting at the events I miss, that if I drank I would just create a laundry list of regrets, and that I have to become more comfortable with alcohol for the sake of making friends instead of for the sake of healing a wounded part of myself.

I really don’t like the terminology of “friends with benefits.” When I think of what that looks like for me, I imagine a friend coming over to hang out, and surprise!, they’ve brought vegan pizza. The insinuation that friendship, specifically one of a platonic nature, isn’t already beneficial should be pretty insulting to anyone who identifies as a friend. When applied to hookup situations, the distinction is meant to imply that the relationship between two people is exponentially enjoyable because it includes a sexual aspect.

on dating as a means of displaying one’s queerness / desirability

Sharing meals with others was a foundational part of my family’s notions of unity, care, and bonding. Eating together gave us an opportunity to intentionally be in the same physical space at a certain time while sharing a vital part of our daily lives. As someone who thrives in very small groups and quiet settings, eating with a few other people can be a really intimate time for me, and I don’t think it’s a coincidence that going out to eat or planning an evening around a meal is very common for romantic (or otherwise) dates.

on geography as a determining factor in finding friends

[Since I left the place I grew up] I’ve felt more empowered in my choice of friends and like I finally have the option to be around people who I don’t have to feel defensive or unsafe around all the time.  And I am emphatically holding onto the notion that I don’t have to settle for sub-par friendships anymore. If I have friend-related deal breakers or standards, I am allowed to and should express them. I also feel much more comfortable drawing and sticking to boundaries with friends now than I did before.

I am pretty unashamed to say that a means of coping with the emotional toll my shitty minimum-wage jobs take on me is routinely lying to my customers when they ask for personal information about me or otherwise try to find faux-connections with me… I don’t reinvent a completely new personality or make up tall tales about my past, but I also don’t answer honestly when queried about where I live, what my family is like, what I do off the clock, or, yeah, how much I actually like my job. Keeping myself at a safe emotional distance from strangers, not just at work, is pretty vital to my sense of self-preservation.

on sticking to my boundaries

In Season 3 of Buffy the Vampire Slayer, Willow likened her reputation as “reliable” to being a pushover. In many situations I’ve also felt that my feelings towards and care for my friends has been misguided and manipulated in order to take advantage of me. Communicating my limits, discomforts, triggers, and sensitivities will allow me to feel more empowered to ensure that my boundaries are recognized and respected. I will work on not feeling like a terrible friend if I cannot meet a friend where they’re at emotionally, and I will not view traversing my own limits in the name of friendship as proof that I am a strong and capable human being.

While I’ve shown throughout this zine that the internet has been a means of helping me feel connected to something tangible, I cannot keep utilizing it as the only lifeline to old and new acquaintances. I can no longer make excuses for the reasons why I do not have regular contact with potential and already-established friends. My sobriety is never a reason to discard invitations to various events, as is my location in a state I hate. It’s pretty impossible that I’m the only marginalized person within a 50 mile radius—I just have to get out there and find others like me.

I love all that she’s written in here. I wish I can convey the sentiments she did in these quotes. I feel like my writing will never be clear! Maybe that’s why I feel like I can’t express anything lately. The fear…

all that they’ve* written in here <3

big thanks to bri for correcting missundead. my blog & writing for the past 3+ years has clearly stated that i go by they/them/their pronouns. not fucking cool. at all. offensive, hurtful, triggering, and upsetting, actually.

also, trying to laugh instead of cry about the fact that the text above includes the fragment, “…coming to the sad realization that I’ll be misgendered no matter what.” its just so goddamn ironic, isn’t it?