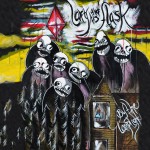 LARRY AND HIS FLASK NEW ALBUM AND WORLD TOUR!

Larry and his Flask, the last great defenders of hootenanny hybrid in temporary autonomous zones are all set to release “By the Lamplight” and we are jumping out of our skeletons excited to be distributing it domestic with team Xtra Mile handling it off North American soil. Lets take a moment to recognize these sleepless monsters have been recording this thing for months until it was just right, fucked off with Frank Turner and now are spending an extra 3 months on both sides of the road to rock n roll across a dozen countries and even more states and probably somewhere near you. Take a peek and plan your futures accordingly.