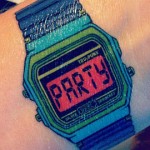 With all of my friends getting plagiarized, it was only a matter of time… I’ve finally made it!

Tattly.com designer Julia Rothman and CEO Tina Roth Eisenberg claim to have created their “Party” wrist watch temporary tattoo independently of mine, which is possible, but I sincerely doubt it.

When I had the idea to make these, I searched first to see if anyone else was doing it, and I went ahead with my own after finding that they didn’t already exist.

This is a concept I’ve been using for a few years, first with physical watches and now with the tattoos. A Google search with the words “party” “watch” and “tattoo” brings up my work as the first result, and has for six whole months before the Tattly design was released.

Tattly wrote back to my emails, which I appreciate, but still said they wouldn’t stop making (what I think is) their copy of my design. There isn’t anything I can do about it.

Feel free to buy mine way cheaper than theirs if you want:
http://silversprocket.gostorego.com/party.html