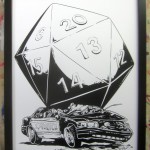 You are a party of 5, and your cargo is dire. You have been told it will forge an alliance between the Root Mountains and the Orcs of Krosis. This chimes well with the lingering parts of your brain that convince you to study Wild Magik in the first place, but after The Purge, after all that rebellion, war and hiding, you find the payday at the end more appealing than the possible blow to feudalism your mission could deal here in Greyhawk.
The trees have begun to thin, you smell fires and roasting hogs head. The soft din than could only be a Luthic Day celebration is said to have been heard by your new elven companion after a +3 sense check.
You suspect you shall reach the city before nightfall so long as these “Harbingers of the Hellkite Shallows” were merely blowing smoke with all those notes and threats and arson along the way. As your party nears the Krosis you see the famed Bitter Bridge which leads you over a moat of gelatinous cubes and straight into The Heart of the Metropolis. “That must be a half league drop,” remarks Zhur the Lesser. “I’m not going first! These ol’ legs are as wavy as the bay of booze!”
He was right, 947 years old by last count, a ripe age for a eyr-goblin.
As you prepare the mule to cross the bridge, the elf rolls a listen check….. You are being watched.

In one breath, a contingent of King Vicar’s personal guard plows through the underbrush and are upon you and your company! They travel in strange carriages, and wave shined amulets and polished short staffs of deep onyx. They are wielding missile weapons out their window and some sorcery blares a sonic fume into your ears, a screeching melody that can only be a battle cry of the monarchies brutish sycophants! The mule bolts and loses footing to bowl straight over the cliff, carrying your supplies and (foolishly) all but your holdout weapons! The Royal Edict demands your surrender to the King’s Justice. Just then, your Orcish friend tears away her vest and undershirt in one violent motion revealing scars across her chest that spell (as best as you can translate) “ALL LAWMEN MUST DIE”. You rolled the lowest of your party. What do you do Sorcerer!?

do you have any modifiers for this?

YOU FUCKING ANNIHILATE THEM! THEY DISASSEMBLE AT THE MOLECULAR LEVEL SCREAMING, SCREAMING THEIR WAY DOWN TO COP HELL! YOU USE A SPELL SO ANCIENT, SO BADASS THAT IT REVERBERATES ALL THE WAY INTO THE ETHER OF ELEMENTAL CHAOS! HARMONIZING ACROSS ALL PLAINS FROM THE ABYSS TO THE NINTH BASTION! UNGOLIANT STIRS IN HER GRAVE AND THE OLD GODS WEEP FOR THEY SHALL BE NEEDED NO MORE! THE SEAT OF KING VICAR TURNS TO MOLTEN SLAG BENEATH HIM HUNDREDS OF LEAGUES AWAY, AND ALL MEN OF GODS AND MASTERS THROW DOWN THEIR SWORDS IN REMORSE AND INVOLUNTARILY SHOUT ACAB! THE MONARCHY IS AT ITS END! ALSO HETERO-NORMATIVITY AND EURO-CENTRIC REPRESENTATION IN FANTASY! WHOO NELLIE!

You remark upon the strange stone polygon that appeared to crush the police carriage and the constabulary before they were disassembled. You hear the soft beat of wings. A shadow falls upon you and your company, yet you are not afraid. The raven queen herself swoops down gently besides you and says:

Hey Andy drew this shit wanna buy one? (Shirts too)