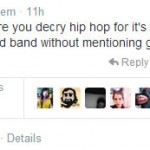 This relates very closely to the Chicago Tribune article that I linked to here yesterday, and also to this really awesome essay Miranda Taylor of Black Wine wrote last year.  But this goes beyond labeling female musicians as FEMALE musicians, presenting the fact that a girl can play the guitar as a novelty; I experience this as a female cartoonist all of the time.  I can’t help but roll my yes whenever I get asked the obligatory question of what my experience has been as a female cartoonist; the question itself has an inherent sexism, whether or not it’s intended that way, but just asking it ASSUMES that my experience is different from a guys.  Honestly, I don’t know what the difference is, because I’ve only ever been a female cartoonist, I’ve never had the experience of going through my career as a male.  But I do know, that until we stop treating women like their involvement in art (be it music, or literature, or visual arts) is somehow surprising, we will not be treated as equals.  I want to be celebrated because I’m a good cartoonist, not because I was somehow able to get ahead in the game despite the fact that I was born with a vagina.

I think it can be nice to celebrate women in male-dominated careers, but when that becomes the sole focus, every compliment becomes backhanded and ends with an implied (or stated) “That’s great… for a girl.”