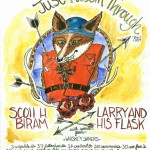 Lock up your beard wax, LARRY AND HIS FLASK are heading out on a full USA tour with SCOTT H BIRAM and special guests THE WHISKEY SHIVERS!! Gaze your eyes on this lovely poster by our very own merch-lady extraordinaire Randi Hobbs!

Larry And His Flask’s new album, By The Lamplight, is available now from Silver Sprocket on CD, LP and Digitally.