WILL LAREN has been one of our favorite artists for the last couple years.

After having him in As You Were and nabbing some of his art to make our printed catalogs only half-useless, we are pleased as punch to have an excuse to talk to this new world genius as we play our cards in hopes of going hog wild on more projects, drunken texting him at 4 in the morning to draw something to put on dog sweaters and shit.

Its a crime Will Laren is not the most talked about comic-smith around. Maybe it’s because nobody knows the brain behind these scribblings? Just in case, we hit the bricks and knocked on doors, til he answered one, and asked the REAL questions.

Your art is generally captioned, but the words are as much a part of the art as the scene itself. Do you usually think of the captions first, or do you draw the scene and then decide what is being said? A less stupid way to ask this question would be: What is your artistic process?

Usually I come up with a joke by seeing an image first. I look through a lot of pictures until some random pose inspires me. You know that improv game where people act out a scene until someone yells “freeze!” then steps in and then comes up with a totally different situation based on the pose? That’s basically my artistic process.

I remember doing a drawing where a woman is leaning backwards because her brain is so heavy because it’s made of solid gold. That idea came from an ad for tampons in a magazine where a woman is limboing at the beach.

In high school I used to go to the library and flip through stacks of Vogue magazines for inspiration since it had a lot of exaggerated, over the top poses. Now a lot of the pictures I’m inspired by comes from random internet photos as well as from magazines. 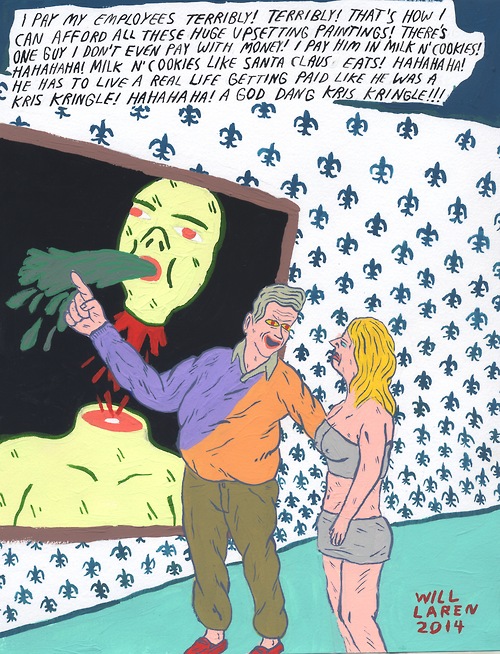 Are you aiming at having your art become your full time gig? If so, what would you work on if time allocation / money / connections / reality were suddenly of no consequence?

If money or time was no object I’d actually like to take on a long term comic narrative or book. I’ve done some short narratives in the past but really haven’t had time to devote myself to doing one again. Every time I read a new comic with an exciting or bizarre world that really grabs my attention it makes me get this urge to try to create my own story. I think a lot of times I’m inspired by the feeling the setting of a story gives you as a reader and would like the challenge of trying to evoke that same feeling I love in the work of others but through my own style. 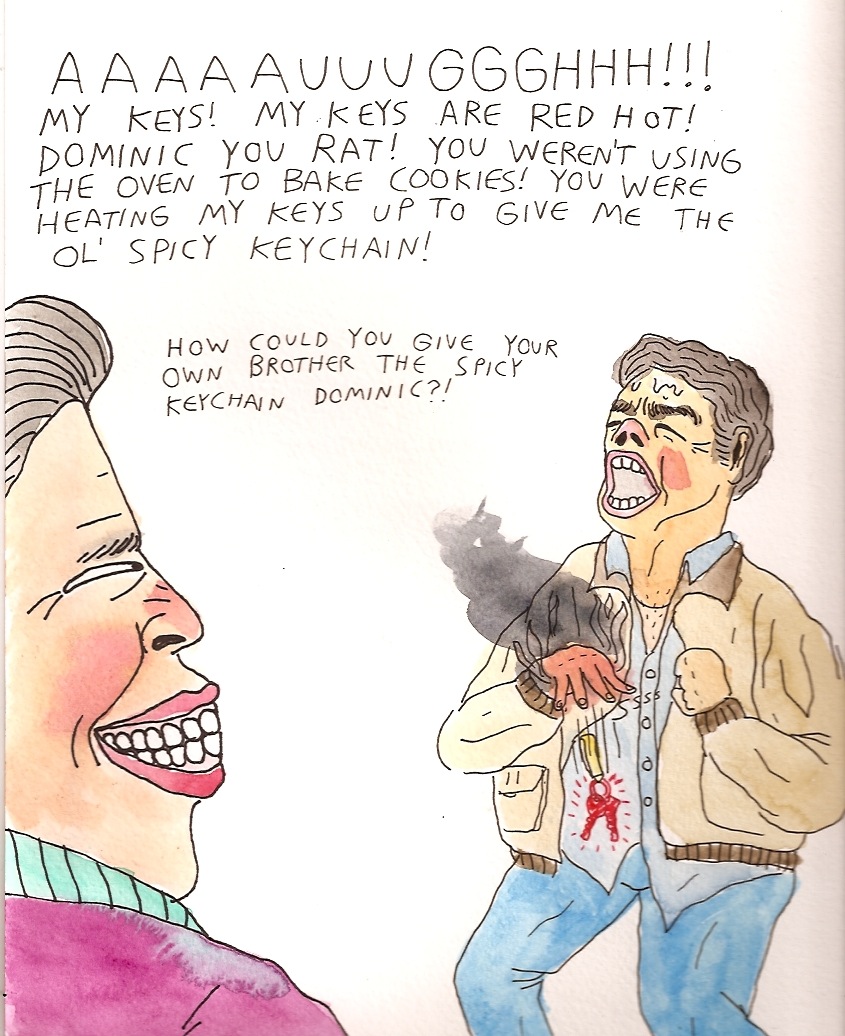 How do you feel about the bart cats gang? and did a bunch of nerds getting bart-cat tattoos inspire “Tat Squad”?

it’s awesome! it’s crazy to think that my final project for my silkscreening class in college is now etched on the skin of people I’ve never met!

As far as Tat Squad though, I was more inspired by how overly serious some people get about tattoo culture. I sort of wanted to poke fun at some of the cliches and tropes that show up in a lot of tattoos I’ve seen. but mostly I’m just a big fan of tattoos! I’ve doodled them in my sketchbook years before I even thought to do tat squad so it’s more love letter than satire. also I probably could benefit from taking tattoos more seriously since all of my tattoos are pretty dumb. 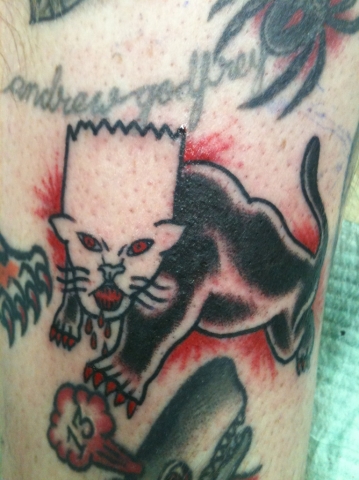 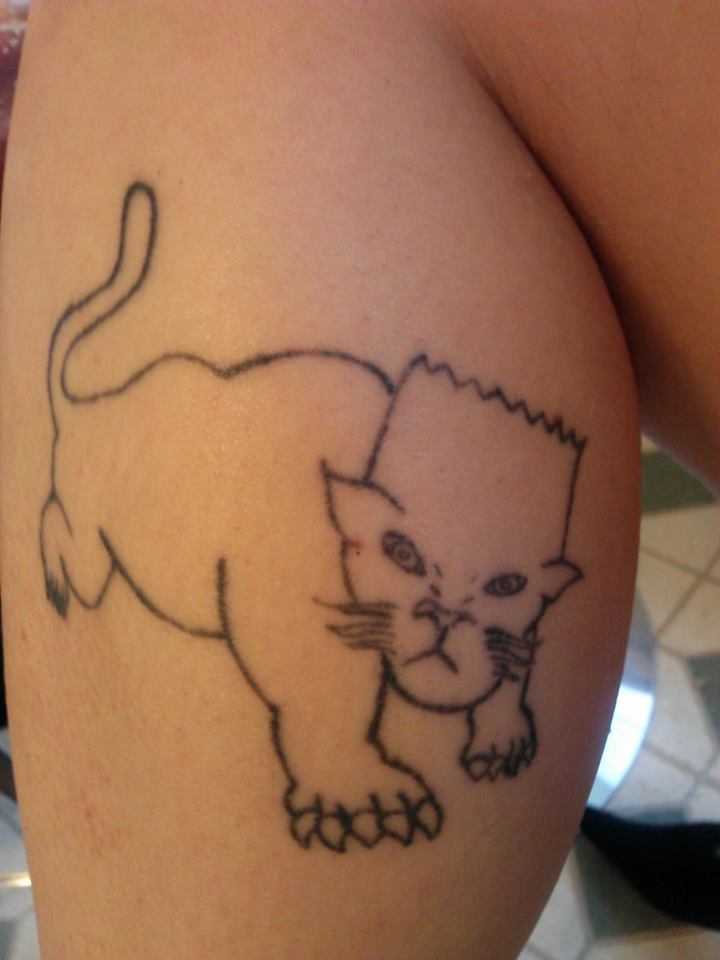 If the internet was on fire and you could only save 5 things you have done to remain in circulation what would they be? Anything you would purposefully leave to the cyber-blaze?

I don’t know. they’re all my babies so I’d probably just burn up trying to decide.

You drop some dope references to hip-hop and punk artists alike in your art and on your tumblr. What would you put on a mix-tape for your fans?

well springtime weather is on it’s way which means it’s time to put away dark operatic lex luger sarcophagus beats and start listening to BBQ tandem bicycle blue sky music. it’s gotta include songs with soul music samples, songs about goofballs in love, atom and his package, music written by best friends, Bruce Springsteen and lee scratch perry (not on the same song). springtime is my 5 week period to not be cynical so I’d like my mix tape to hopefully reflect that. 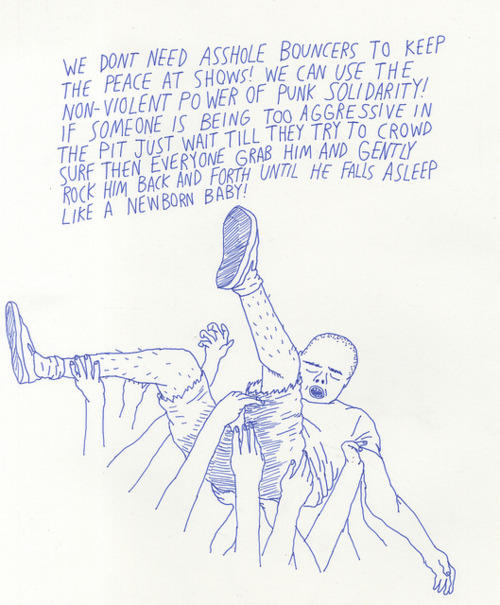 If someone wanted to hire you to go hog wild and paint up their house or business, what would you do given complete artistic freedom?

I wouldn’t even know where to begin! I’d really like to base whatever my idea was on the space I was given, since a lot of times people can draw something out that looks great on paper but just doesn’t translate when it’s finally put on the wall. but I really would love to one day get a chance to! (to buy Will a plane ticket to come to your respective wall and paint it up, make words at willlaren@yahoo.com) 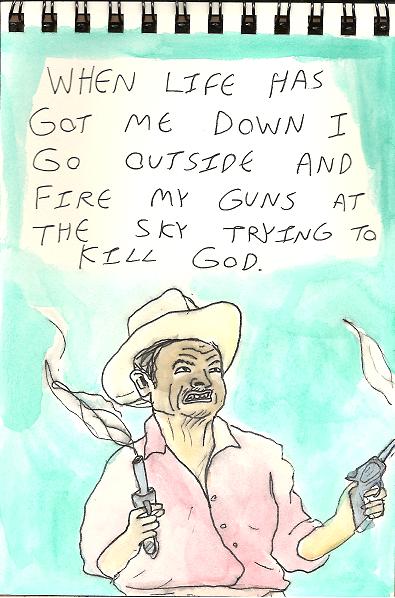 What do you find funny?

videos of gorillas walking upright. it’s hilarious because they have these huge upper bodies and then these little tiny baby legs. 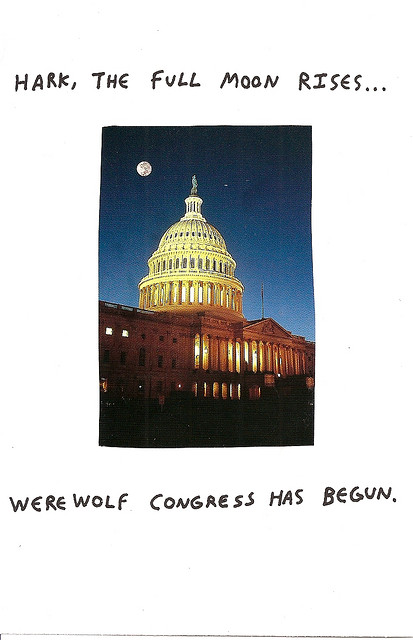 there’s a lot of talented people I share a studio with at space 1026! people should check out Andrew Jeffrey Wright’s work (http://andrewjeffreywright.tumblr.com/ ) and Max Seckel’s ( http://maxseckel.tumblr.com/ ) as well as my former roommate and current friends art (he goes by Vulpes Vulpes now ( http://vulpesvulpesvulpes.tumblr.com/ )

Any projects coming up you would like to talk about?

I have a new Tat Squad and a new Slurricane (zine) both debuting at MOCCAfest in New York April 5th and 6th (Editors note: sorry this just happened! Get them on WL’s store site, these zines are great). I’ll also be in Chicago for CAKE May 31st to June 1st! 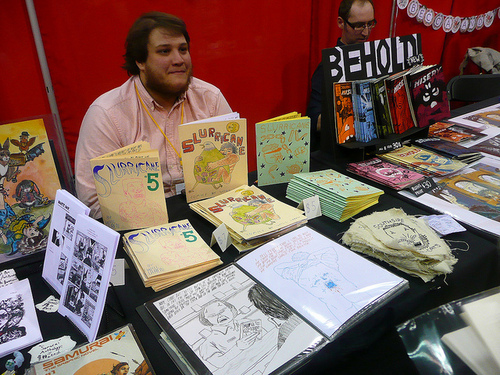 Hey turkeys. Will’s art liveshere and on Tumblr here, and his shop is here, and a comic can be found in our very own As You Were #2 and scree-prints. Getchasum.