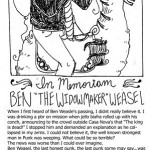 The suspects in question.

Whoa! We have a really good “Ben” themed combo post going. So let’s keep it rolling by revisiting that time we were all sitting around the office, talking about publicity stunts to pull then realized we had a pretty good chance of getting sued by Ben Weasel since he already hated us. So we decided to try fake his death and I started writing the obituary and about an hour into writing it he punched a bunch of ladies in Texas and there was a video out like a sign that yes, this was the perfect use of our time. He didnt sue us, but maybe opening up an old wound like this will convince him.