Previous Next
Interview with Emilja Frances 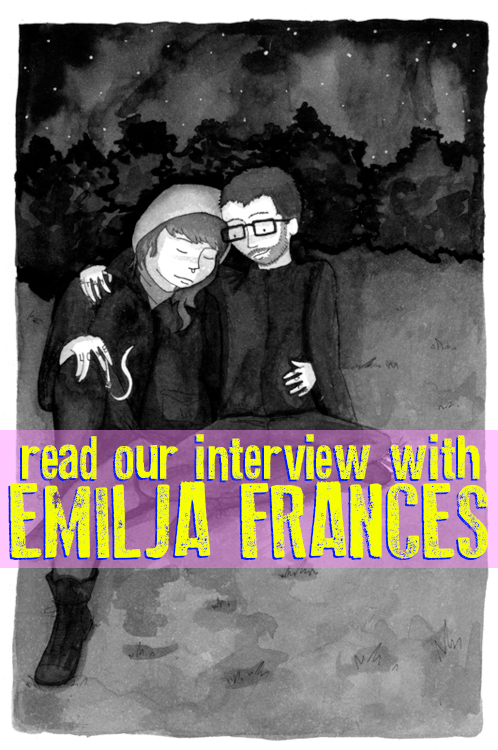 Today’s edition of “Words From Good Art Doodz” is from the preposterously talented Emilja Frances. You might remember Emilja as “the first human consciousness uploaded to a computer,” paving the way for things like “the cloud” and “penicillin,” but after all the fanfare and award ceremonies, Bill Gates unceremoniously forgot about ol’ Emilja in a room under the Pentagon. What has Emilja been up to all this time since we were promised this new computerized way of living would “guarantee you live forever” and “spit in God’s smug, unruly face?” Making a ton of rad-as-fuck comics! We are so lucky to have talked Emilja into joining the As You Were crew, and we’ve been dying to interview this electronic marvel. Turns out the Pentagon is like, stupid easy to sneak into. We found good ol’ Emilja in a room marked with a crude hand-drawn “robots” sign, and proceeded to get the scoop, and steal Henry Kissinger’s Gmail password.

Read on to find out what she’s been reading, what she draws, and why her dog is the most perfect creature ever.

How did you get sucked into this As You Were thing?

I have very little idea. All I know is that one day I was drinking a coffee after work and got an email from Mitch being like, “Hey y’all, I’m starting this thing and want you to be in it!” I had never interacted with him before, so it was a surprise, but I assume he had been alerted to my existence by friends of friends.

Your autobiographical comic, Ship of Fools, has been going for almost five years! Did you expect it to go on this long? Do you have plans for an omnibus or some sort of collection, and would you like this to be your main project?

I had no initial plans for it. I had just started drawing comics and realized I really liked doing [it], and I was already a zine person, so I just figured that’s what you do—start a series! I’m glad I’ve stuck with it for this long, though. My dream would be to put out an anthology once I finish ten issues, but I seem to be stuck at eight, so we’ll see. It’s the only way I can ever really see myself publishing a book, since I don’t have the attention span for drawing novel-length stories—if I try to go past 30 pages, I completely lose interest. 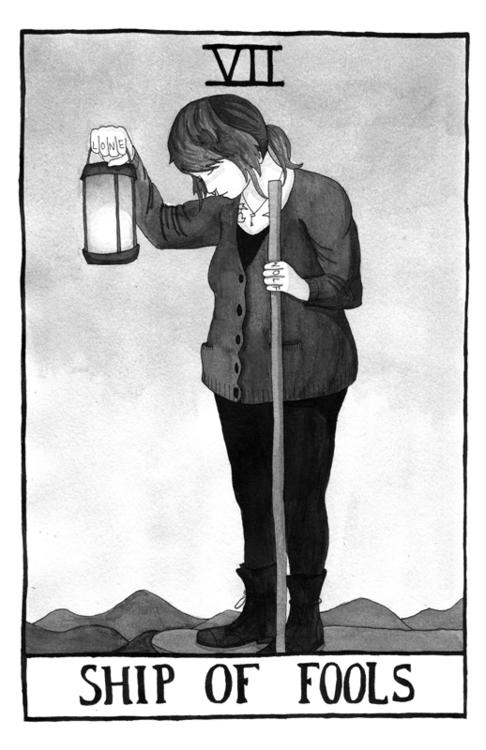 If you never had to worry about money/time/responsibilities again, what would your dream project be?

I guess this is supposed to mean comic project, but honestly, all I can think about these days is blacksmithing and woodturning. I recently got to forge a knife for the first time, and also use a lathe, so my dream project would involve those two things. Of course, I would probably simultaneously draw something about me being a badass female blacksmith.

What do you do in your non-artsy life?

Well, most of my life is arts/crafts-oriented. I just love to make things. Lately I’ve been really into woodworking and mead making. I grow plants and make tinctures and I learned how to quilt recently. And I fucking love to read, and hike, and go camping, and drink beer with friends… and of course I work stupid service jobs to pay the rent. 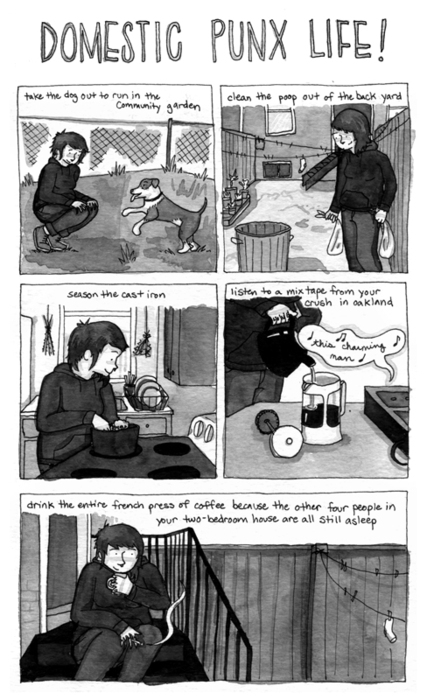 I wish I knew more about them. What’s the lizard people one about? Lizard people sound cool. Like the Silurians in Doctor Who.

Are your comics at all informed by your queerness?

I guess so, but only in the sense that my whole life kind of is, in subtle ways. My comics are all autobiographical, and while I very rarely write stories about being sweet with anyone, the whole way I relate to people is informed by my queerness—not just in terms of gender, but in the fact that I don’t view romantic relationships as this important defining thing in life. My commitments are to my friends, and those relationships are my priorities. And also, yeah, I don’t view gender as a weird binary, where I have to relate to people differently depending on which side of the line they’re assigned to. And I think, if anything, those are the ways my comics reflect my queerness. Maybe too subtle to be read that way, unless you’re looking for it.

Your comics don’t shy away from topics like depression and the general horror of being an ape with monster feelings. Is making yourself vulnerable on your own terms in your art therapeutic, or do you do it just because something compels you to not shy away?

When I first started drawing comics, it was a way to tell funny stories about adventures with friends. Then I ended up in this fucked up non-relationship, and I drew about it in order to process what was happening. Upon realizing how helpful it was to me, I kind of just kept doing it. My comics became an avenue to reflect on periods of my life, turn those events into a story, and find the conclusion to it or the lesson learned. And since I struggle a lot with depression and anxiety, those factor heavily into the stories. And the thing I quickly learned from drawing those kinds of comics is that… they mattered to people. People related to them or drew strength from the lessons I learned. And when I meet someone who tells me that my comics have gotten them through a difficult time… that feeling is why I keep drawing. 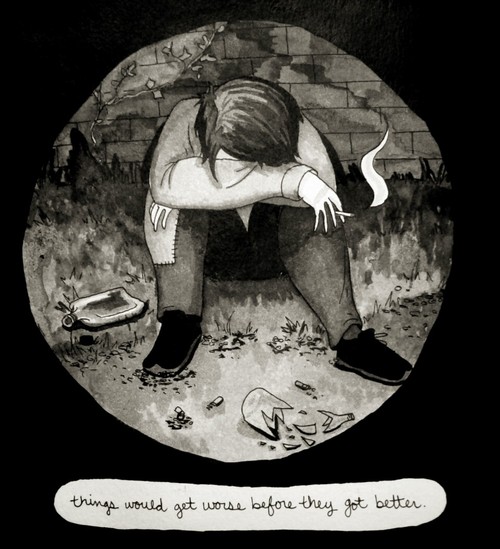 I just finished the last book I read. Any suggestions for a new one? Are you reading anything currently? If it is non-fiction, wanna take a wild stab at how it will end?

Oh goodness! Well, everyone should read basically everything by Ursula K. Le Guin and Octavia Butler. Masters of sci-fi, those two. I’ve been reading more than usual lately, because I just moved and we don’t have Internet yet. The Magicians trilogy by Lev Grossman, Audre Lorde’s collection of essays called Sister Outsider, M. Craig’s The Narrows, which fulfilled my dream of a fantasy novel about queer punk hipster babes. And I just picked up a copy of Judith Halberstam’s The Queer Art of Failure, which I’m excited to read next. Fuck, I love books.

Tell us about your dog!!

Oh my god, she’s perfect. And by that I mean she’s not perfect at all, but I love her more than anything in the world. She’s a blue pit who came from the Baltimore city shelter. She’s a giant baby, she wants to cuddle all the time, and [she] flops around like a little shark. I call her pig-shark. Also “Little Mouseface” and “Seal Pup” and about 20 other animal-related pet names. She has some behavioral issues; she’s dog-selective and not always good with strangers, especially men. But the people she loves, she does fiercely. Basically, she’s exactly like me. 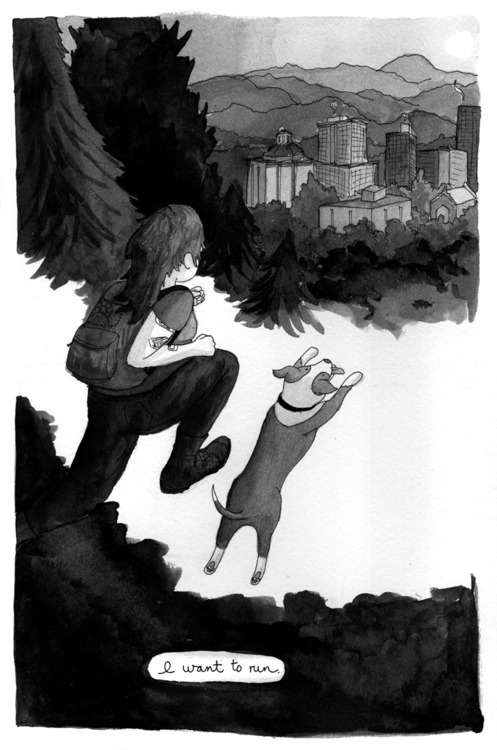 You are elected treasurer for life of a small socialist archipelago. What do you spend the money on?

Um, abolish money and feel really confused that anyone elected me to anything in the first place? Be like, “Y’all, I have knuckle tattoos. Who thought this was a good idea?” 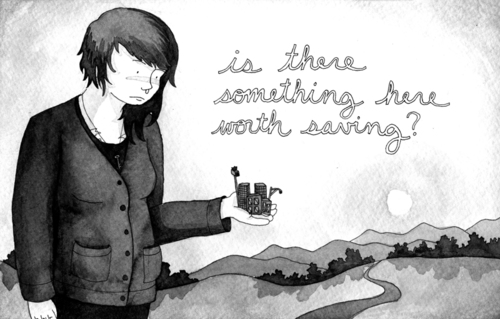 I think it’s weird, because Tumblr in particular makes it so the artist is removed from the art, because people reblog things they think are pretty, without ever looking up the creator. And I think it can sway people into making work for those platforms—more one-liners and less in-depth things. It’s just another weird form of capitalist consumption, supply and demand, whatever. But given all that, I think it also gives people a lot of exposure they wouldn’t get otherwise, which is awesome, and can be really beneficial. Like, my best friend started making knives less than a year ago, and he’s already supporting himself as a craftsperson solely due to Instagram. So that’s fucking awesome.

It’s such a subjective term. For [some people], it could just mean people noticing their work, while for [others], it could mean supporting themselves with their art. Like I said earlier, for me, meeting someone who tells me that my comics helped them through something feels like success. Sure, I’d love to publish a book someday, but in the meantime, since I’ve been in an artistic rut this past year, just putting out another zine would feel like success. It can mean whatever people define it as for themselves. 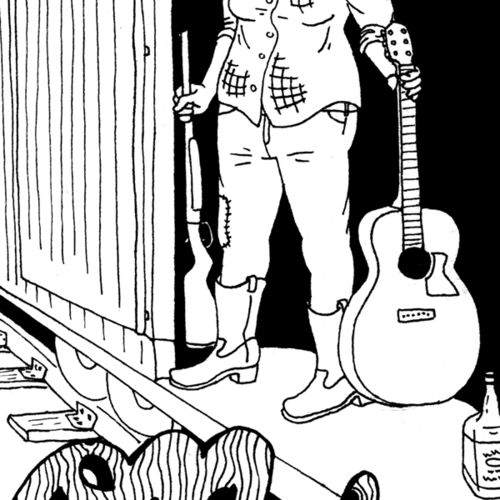 Can’t get enough of Emilja? Neither can we. Luckily, there is lots of E.F. art on Tumblr, and there are some seriously sweet comix of hers in the first and third issues of As You Were.