Previous Next
Interview with Rob Cureton 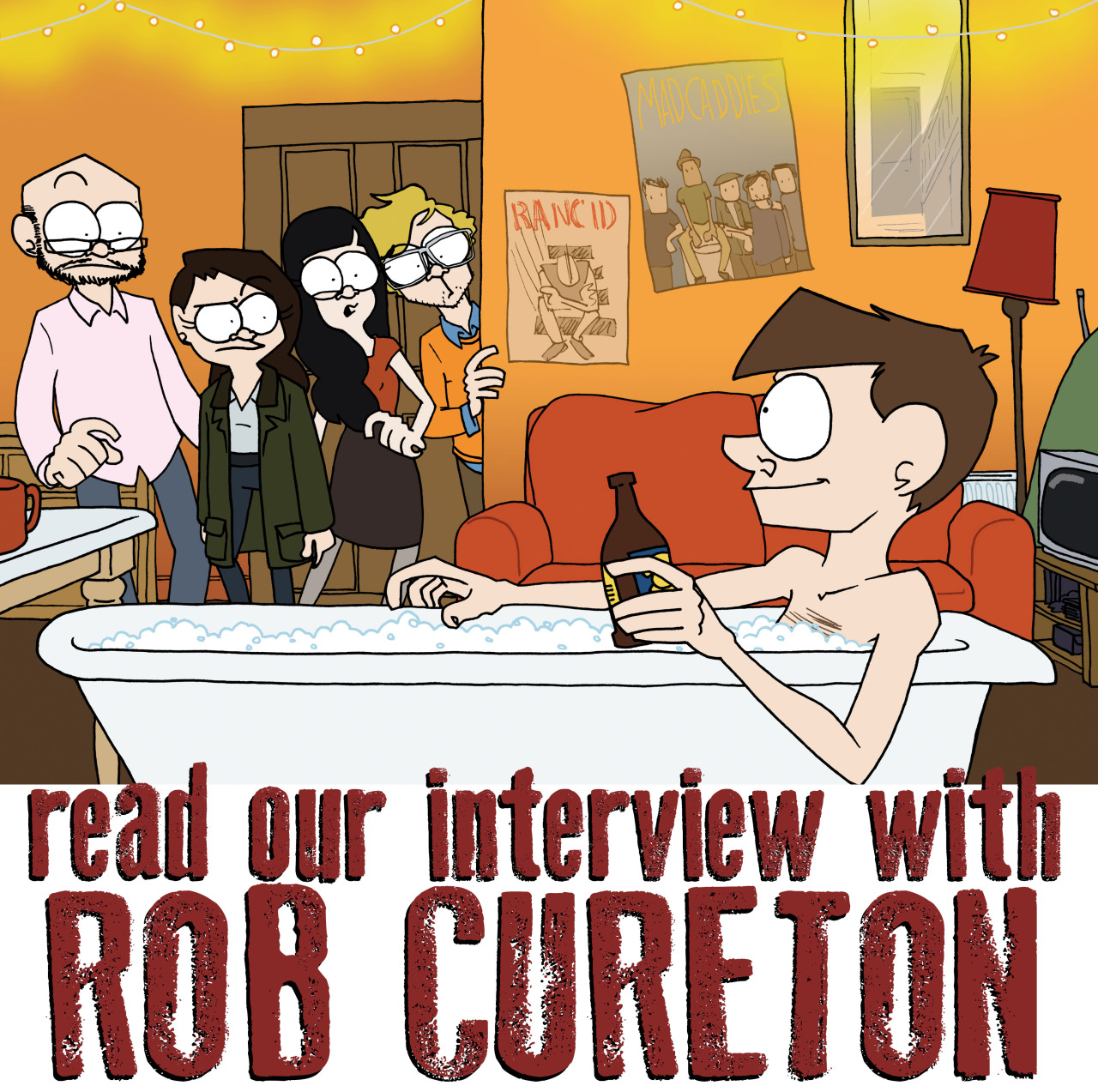 Not everyone is lucky enough to work full-time doing what they love, but our pal Rob Cureton is. By day, he’s an animator, and by night, he’s either drawing comics or making the memories that inform the comics.

Though his free time is limited, we were able to tear The Cure away from his recent birthday celebrations to get the scoop on where he gets his ideas and how he draws a line between work and play.

Read on to discover more about how Wallace and Gromit set him on his career trajectory, which songs he’d choose as a soundtrack for this interview, and what part of Scene City he’d live in (this week).

What’s the story behind why your art graces the pages of As You Were #3?

It mostly came pretty much out of the blue. Mitch Clem just casually sent me an email one day asking if I’d like to be in issue one. Couldn’t quite believe it at first. Nothing Nice To Say was the first web comic I ever started reading regularly, and suddenly the guy who drew it is asking me to be in his new project. I guess I must’ve been on his radar after buying a painting off him a year or so before.

Obviously, I turned it down the first time because I’m an idiot. Also I had a lot of other work on at the time and couldn’t fit it in. Thankfully Mitch asked again for issues two and three, so there we go. 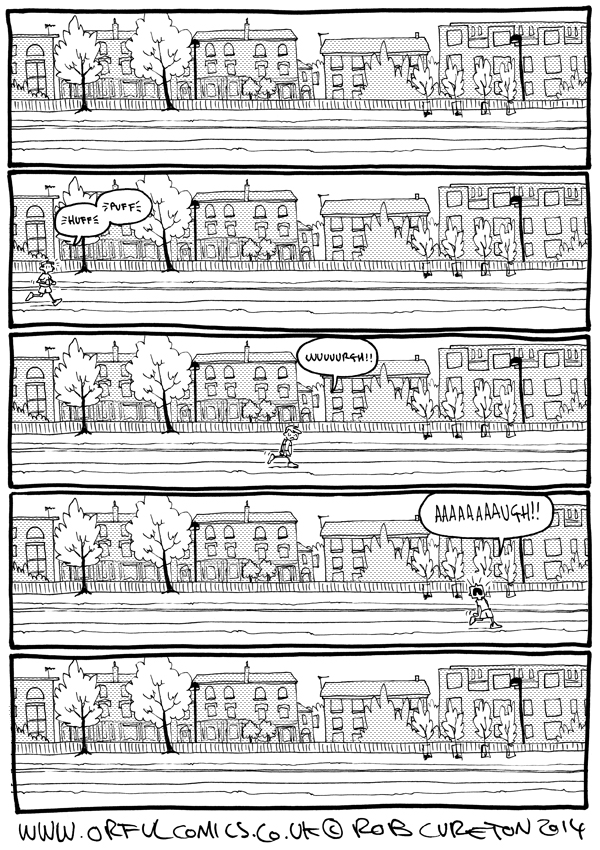 You have an autobiographical comic, Orful Comics. Where does the name come from? What made you decide to start drawing the comic? In what ways is making art about your life beneficial for you? Because comics can be less vague than, say, poetry or song lyrics, do you ever feel like you have to leave moments out or censor yourself?

The name is pretty much just a stupid play on words. I’m a big fan of self-deprecating humor, so it makes me laugh that the first impression I give of my work is that it’s terrible.

I first started doing auto-bio just to practice the process of actually drawing comics. I wasn’t really confident enough to try and write something original at the time, so figured I’d work my way around that and just use moments in my life as a starting point. I started to quite enjoy it, and friends were keen to be the next guest, so I carried on and it became a thing.

Doing a weekly comic keeps me in practice too. If I don’t draw a comic for a while, it comes out all dumb when I start back up again. It’s also nice to look back on and remind myself of good times

I do censor quite a bit. There’s often moments that I’d LOVE to put into comics but can’t for various reasons, be it not wanting someone to know about a certain thing, or maybe it’s a bit too personal for me to want to share. I change quite a lot too. I’ve obviously only got so much space on a page to fit things in and sometimes little details need to be switched about to make an actual story out of it.

You also draw Scene City, which is sort of like a science fiction-y musical adventure. Where does the inspiration come from for that? Is it 100 percent fictionalized, or do you use moments from your life as the basis for some of the stuff that occurs?

The idea of Scene City actually came as a bit of an afterthought when writing the first book. I pretty much just had this story I wanted to tell taking the piss out of ska bands turning emo. I wrote a few different drafts of it but none of it was working. I had a little re-think and came up with the idea of it being set in a city divided by musical genres, and then everything just fell into place.

From there, it opened up this idea of being able to make fun of various genres of music and the interactions between them wrapped around some supernatural/sci-fi junk.

It’s pretty much entirely fictional. A few locations have been pinched from real life, and there [are] obviously a few celebrity parodies, but it’s mostly not based on anything. Apart from the bit about giant robot pop stars. That actually happened.

An excerpt from Scene City appears in As You Were. What is the larger context surrounding this inclusion? Is it from those comics or was it created as a complement to them?

The Scene City stories in As You Were [were] written specially for those books. I made a conscious decision when I signed up to not use the auto-bio comics for it. I knew there were a lot of artists already signed up who would be doing auto-bio, and I wanted to do something slightly different, and also use it as writing practice.

The As You Were submissions fit into the same universe as the Scene City books. If you look carefully, the two stories are linked and tie into the main comics. I thought it would be a bit of fun to have some short stories that run alongside the Scene City timeline, using different characters.

In addition to drawing comics, you work in animation. What sparked your interest in that? What’s some of the work you’ve done? When you’re inspired to work, what is the deciding factor between whether it will be comics or animation, or is it a pretty clear split between comics = play and animation = work?

I’ve always been into animation since I was a kid. It’s great fun! I loved Wallace and Gromit growing up, and [wanted] to be the next Nick Park, so [I] studied animation at uni. Unfortunately, stop-motion animating is HARD, so I did something a bit easier instead.

I’ve worked mostly in corporate animation over the years, making animations for conferences openers, internal communications, health and safety videos, that sorta thing. This year I’ve finally broken into broadcast animation though, which is where I really want to be. I’ve been working on a preschool series for Cartoonito called Childs Farm for the past few months and recently started working on a pilot for something I can’t really talk about in public yet (sorry).

Animation is entirely work for me. I’ve considered doing some animation for myself again over the years, especially when corporate was dragging me down a bit, but honestly, when I’ve spent all day staring at a screen pushing keyframes around, I just want to put on some music and draw. Which is thankfully where comics come in. Good old pen and paper comics.

Showreel 2012 from Robert Cureton on Vimeo.

I’ve read that Jim Mahfood is one of your comic heroes… who else do you find inspiring (artists or otherwise)?

Sooooooooooooo many! Pretty much every convention I go to, someone points out an influence in my artwork I didn’t even know was there! There’s obviously a bit of Mahfood and some nods to Brian Lee O’Malley in there. Both big inspirations of mine. I’m hugely inspired by Jamie Hewlett, Skottie Young, Charles Schultz, Quentin Blake… there [are] many. A lot of incredible artistic influences and too many to list properly.

Based on your dates posted online, it looks like you’re very active and make appearances a lot. That said, what’s the comic community like in the UK? Is it very close-knit? Do you tend to see familiar faces at each of the events, or is it different depending upon where you are?

Yeah I do a LOT of conventions. Too many sometimes. They’re great fun but hard work.

The scene in the UK is really strong at the moment, with lots of great creators popping up all the time. We’re all pretty close too. Me and some friends started a UK creators community on Facebook a few years ago to try and help each other out and get to a point where we’re all friends. It’s been pretty successful over the three or so years it’s been running, and I’ve made some great friends through it.

You see a lot of the same faces at the bigger events, which is great. It’s also nice going to smaller local shows and seeing the people you only see around there where they live. 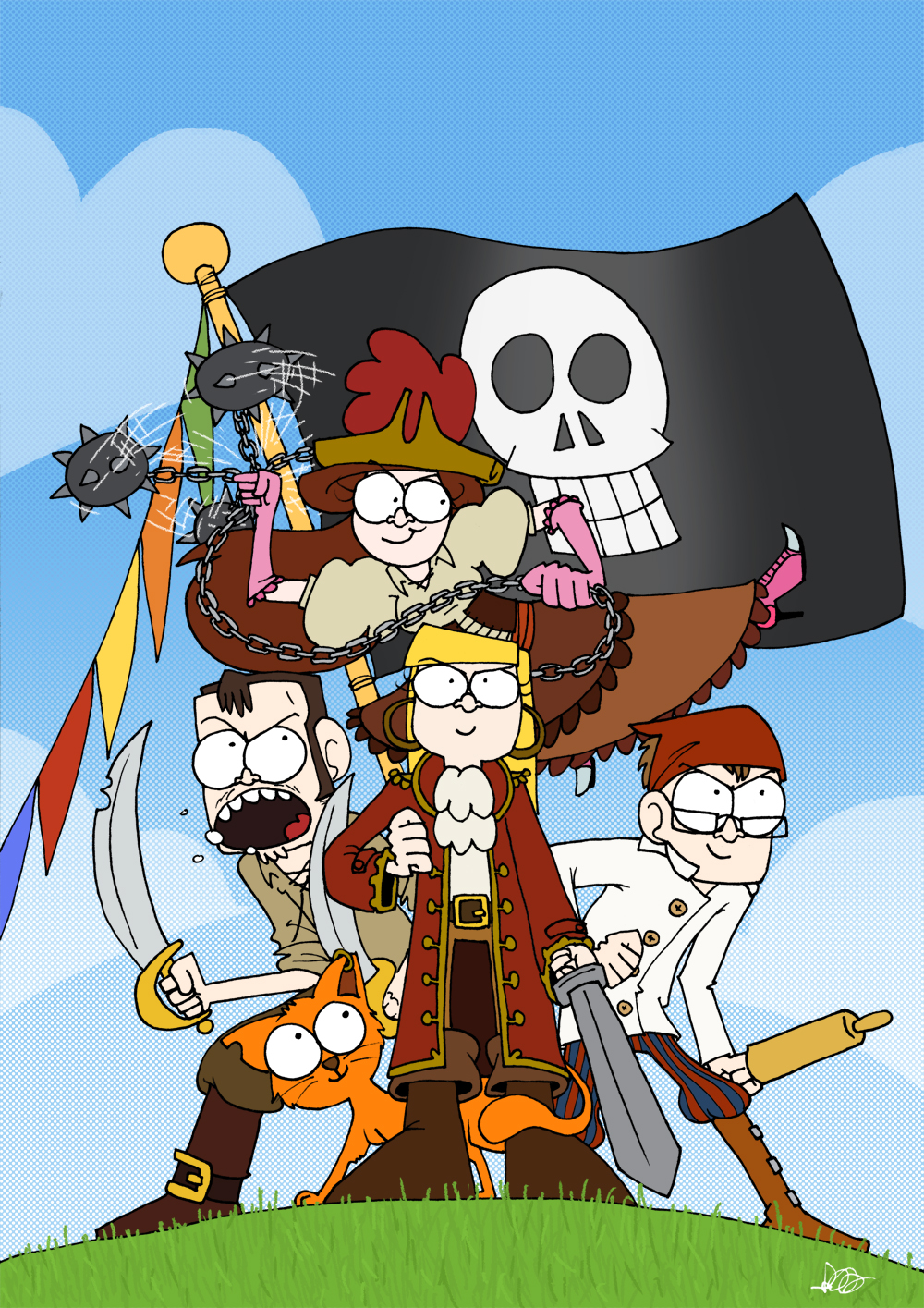 Music is obviously a big part of your life, which is not only evident in the comics themselves, but also in your inclusion of your drawing soundtrack at the beginning of each collection. Is there a certain kind of genre of music that you work best to, or does it vary? And if you had to create a soundtrack for the person reading this interview, what would you include on it?

I love putting the soundtracks in the comics. It’s a thing I nicked from Jim Mahfood books (yes, more Mahfood) that I quite liked. There’s not really a particular type of music I work best to. I more have to make sure I have the right music on for the mood I’m in. It’ll be some dumb pop-punk or ska if I’m feeling great. If I’m a bit down or sleepy, it’ll be nice acoustic stuff or ambient electronic-y something or other. Sometimes no music works best.

Favorites at the moment for the interview playlist would have to be Masked Intruder, Dizraeli & The Small Gods, The Dreadnoughts, and By The Rivers. Also, The Aggrolites, because I went to see them last week

If you could only listen to one genre for the rest of your life, what would it be? (Or I guess another way of phrasing this: if you lived in Scene City, what part of town could you be found in?)

Ooooooo why would you do this to me!? I’m so torn! At the moment, it’d have to be pop-punk, since I’m really feeling it at the moment, but [I] might have to make a sneaky defection in like a week or something. It changes too often; don’t make me choose!

You seem to be lucky working in a field that you studied and also that you enjoy. However, if you were to branch out in the art world, what would you want to try next?

Being in a proper band is something I’ve always wanted to do but has never really materialized more than one practice (I’m looking at you, Ceiling!). I’m not sure what I’d want to play though. There [are] a few styles I’d love to do, and I want to do them all, so it might end up being a pretty weird band. Latest idea was ukulele covers of video game music with beat boxing and rapping over the top. Maybe I’ll do that one… 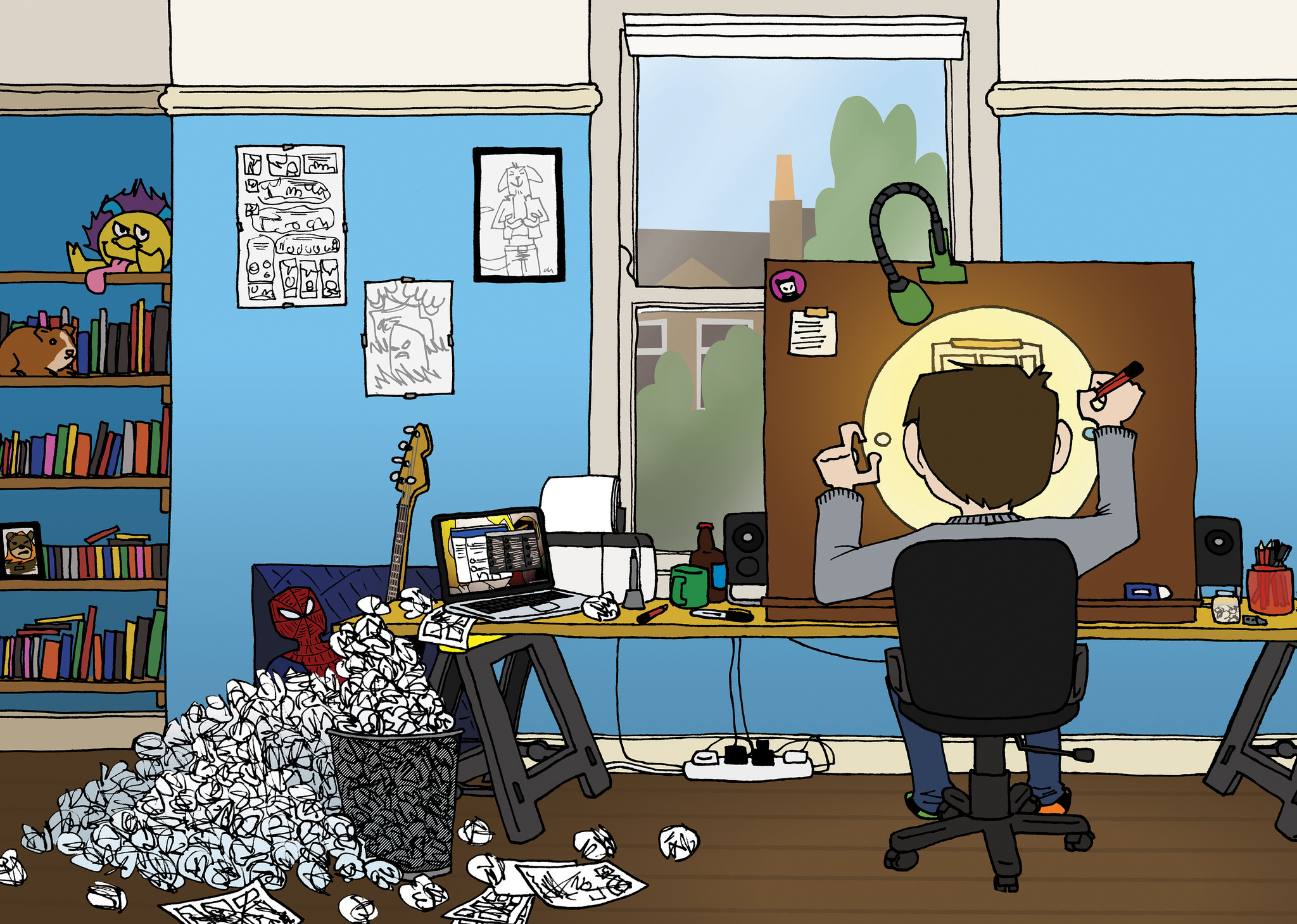 Wanna keep tabs on what Rob is up to? Head over to Orful Comics, sneak a peek at his animation, or buy some comix (available as digital and physical copies). And don’t forget to check out all of the awesome art in As You Were.