Previous Next
Interview with Fred Noland 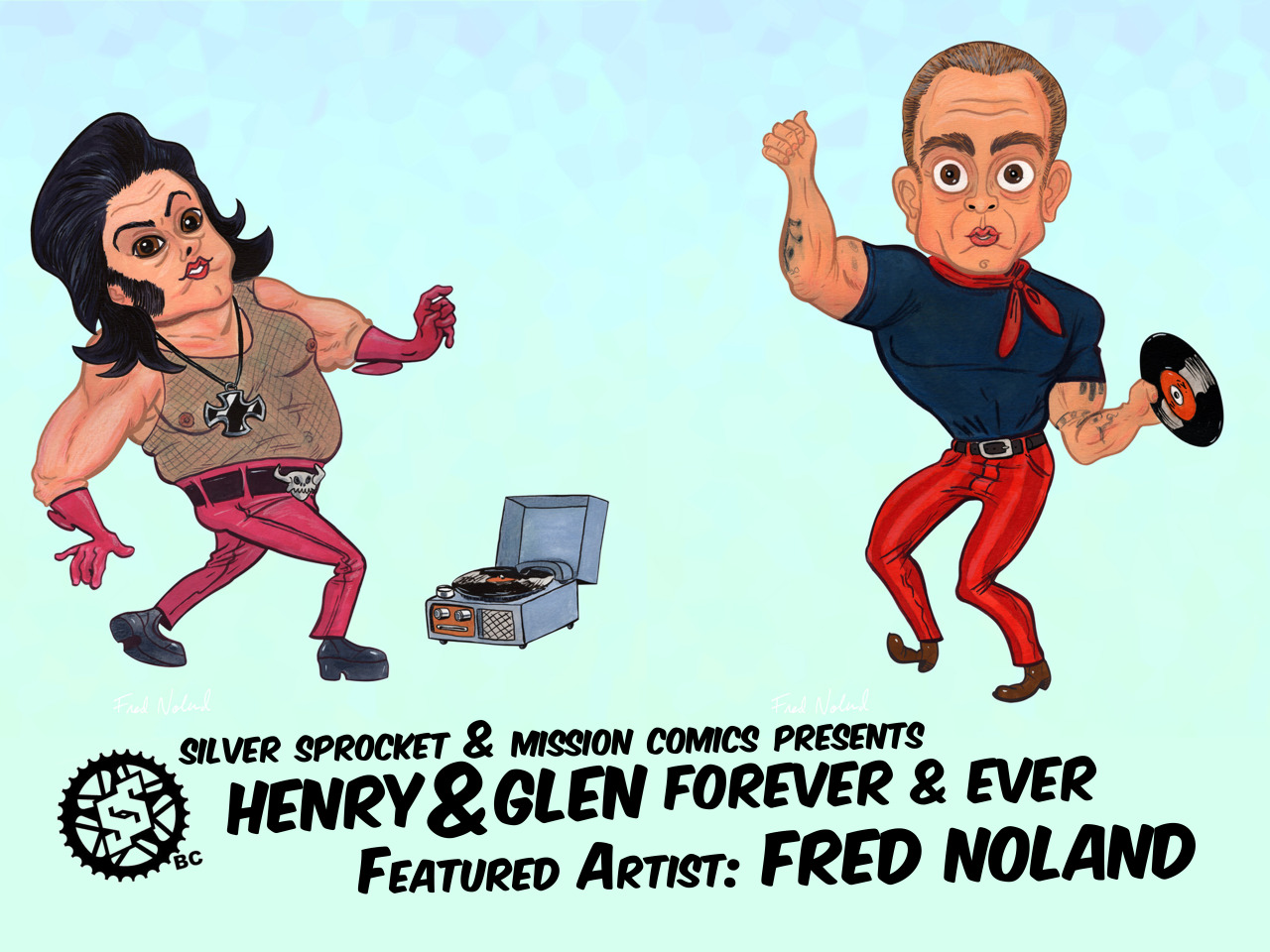 We’re sad to say goodbye to our Henry & Glen Forever & Ever art show at Mission comics, but stoked to introduce you to some of the artists involved! First up is Fred Noland, a local Oakland native, cartoonist, illustrator, designer and bicycle bud.

Fred’s work in the show consisted of a cheeky drawing of Hen & Glen dancing around to records as well as a Hen & Glen take on the classic American Gothic. He was awesome enough to answer a few questions we bugged him with, keep reading for more.

What do find interesting about the Henry and Glenn Forever project?

The concept is hilarious.

Rollins is friendly with several people you wouldn’t expect, as this straight-edge, working class, punk rocker. Nick Cave is the first that comes to mind. Iggy Pop. Danzig, of course.

Taking it to the next level with a secret romance, Rollins being a bit of an intellectual and Danzig, this tiny Elvis who sang “Angelfuck”, I just love the absurdity.

Seeing all the different artists take on the theme was pretty amazing.

How did you get involved?

Tom Neely hit me up at SPX a couple of years ago. I said yes immediately.

Are these comics relevant to your other work?

These land well-outside of my “brand”. That’s the beauty of anthologies, they’re a great opportunity go all the way out in left field.

What is the intention with your work?

Put simply, I’m trying to communicate and relate. Not convince so much, but open a dialogue. Sometimes its internal, my comics are practically me talking to myself and inviting an audience to watch. My illustrations serve the accompanying articles. The paintings? Full disclosure, usually they’re just meant to be funny. Theres a subtext but not all that deep.

What sort of projects are you working on now?

I’ve been working in my sketchbook a lot more recently. Trying to be more extemporaneous and less precious about the work. Some of it ends up in the world (like “557″, my AIDS Lifecycle Memoir).

I have a story about Major Taylor, a champion Black cyclist from the turn of the last century, that I’m doing for Irene Comics. Fantagraphics short-run imprint is putting together a collection of some of my other work. Black Sheep #4 is out this Autumn.

Tell us a bit about the comics you’ve done in the past, specifically Black Sheep.

I’m a bit all over the map. I tend to follow what interests me at the time. I did a heavily researched comic about the worst Popes in history called Infallible. 557 is about riding AIDS/LIFECYCLE in 2007, which coincided with some upheavals in my life.

Black Sheep, my main, ongoing project, is about that weird gray area between adolescence and adulthood. Throw in some creative aspirations and hooch and you’ve got yourself a story!

What is your favorite thing to draw, and why? When did you start making comics?

Jalopies and animals. The word “jalopy” is so much fun to say, how could you not love drawing them? When you put a French Bulldog or drunk opossum behind the wheel the possibilities are really limitless. I began making “alternative comics”, if that is still a term, about 20 years ago. Visual storytelling? Since I was about 5. I hope to be good at it someday.

Where can we see more of your work?

I keep my Tumblr pretty up to date with new work and pages from my archives. I also have my Henry & Glenn art available on InPrnt.

Henry and Glenn Forever and Ever is a collection of humorous comic style artwork from the cult-hit slash-fiction graphic novel by Tom Neely and friends that takes an intimate look at the domestic lives of Henry (Rollins) and Glenn (Danzig).

Silver Sprocket will be running features on some of the artists and their contribution to the exhibition, on display at Mission Comics in San Francisco until May 30th. For additional information, please email avi[at]silversprocket.net.