Previous Next
Interview with Aimee Pijpers 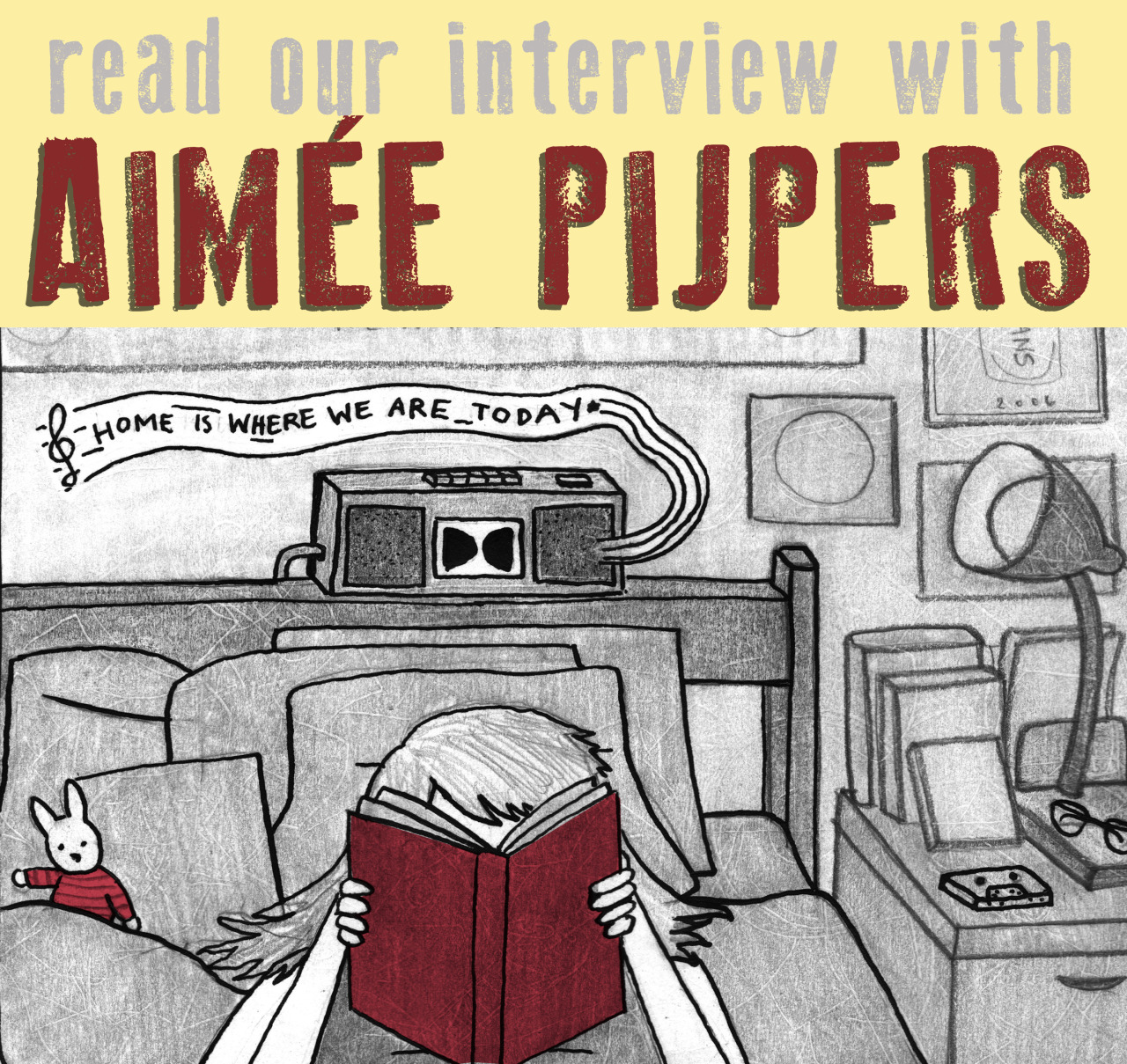 Aimée Pijpers’ comics are like a well-curated mixtape, the kind that the maker stays up all night recording, rewinding, and re-recording, in order to make sure the song selection, the message, and the flow are just right—which is one of the reasons we adore her art.

Read on to find out about her love of lists, why she’s lived in so many places, and what gets her excited about comics.

Since we last spoke, I got a full-time job and still spend all my free time making stuff and riding my bike and being an occasional shut-in. I’m in a new band with my friends that doesn’t have a name yet. I’m currently finishing up some projects I’ll have available at the Twin Cities Zinefest (11/14) and just started a very personal month-long project for November (which you can check out on my blog). I just finished watching all seasons of Daria for probably the fourth time. Now I’m re-watching episodes of Hey Arnold!

Tell us about your bunny.

My bunny is called Nijntje. It was given to me by my older sister shortly after I was born, not that I remember it. Its name is Dutch and translates to “Miffy,” like the name of that little cartoon rabbit that wears the orange dress. In actuality, it translates to “bunny.” Nijntje has traveled all over the world with me and has logged more miles than a lot of people I know. Nijntje currently lives in my room. Nijntje is my friend.

You’ve lived in a lot of places… care to share why? Army kid? Missionary parents? Family that just likes to live all over? Was it art school that brought you to Minnesota or something else? What made you stay? Also, how has living all over the world shaped who you are? And in particular, how have each of these places defined you?

My father used to work for an international bank. Through working his way up in the company, we would move around. Before I was born, they started in Amsterdam (both of my parents grew up in the Netherlands), then went on to Singapore. My siblings were born in those places. Then they moved to America, and I was born. Then we went to Belgium, Hong Kong, back to America, and I’ve been here ever since.

My father explained to me once that he never wanted to stay in the Netherlands: “Staying there would’ve been boring.” I’ve always admired that thought. My parents live in Belgium now.

All of the places I’ve lived have let me experience so many things that a lot of other people don’t get exposed to until they are adults, or never. I got to absorb different landscapes, cultures, languages, and climates. Moving around from drastically different places gave me an understanding of people and the world that I wouldn’t trade for anything.

I chose Minneapolis primarily for art school and for the music that came from there, as well as a desire to experience a new part of the United States. I hated it the first few years, but grew to love it as I found friends who like the same weird stuff I do. I couldn’t tell you if I’m going to stay here or not; I’m always down to pick up my shit and start somewhere new. For now though, it works.

You told us before that punk has been a part of you and your art since you were 12. You’ve been in Minneapolis since 2007, which is a long time to be in one place compared to the rest of the places you’ve lived. That said, you probably have a pretty good feel for it. What’s the punk / art community like there? We would assume it’s a positive thing because you’ve stayed there. What aspect(s) of it are you most appreciative of?

Minneapolis is a great city. There is so much going on with music and art that I can’t keep up with it. There are shows every day, every week, all the time. That’s my main reason for staying put.

The Connecticut town I lived in before I moved to Minneapolis was completely dull, uninspiring, and overwhelmingly white and privileged; needless to say, after my log of worldly adventures, I was not okay with everyone looking the same and playing beer pong in their parents’ basements on the weekends. While I met some of my best friends there, I wanted nothing more than to live in a place that embraced all forms of art and had a diverse population.

Minneapolis has that, weirdly enough, considering its location. I can’t speak for the punk scene; it has so, so many facets. But I can say it is alive and well. There are always new bands popping up.

I love to draw the most. Comics and flyers are my favorite things to make. While pen/ink is implied as my preferred medium, I love doing other stuff too. I still love painting despite not having done it in a while, and in the past two years I’ve started playing music with other people and that is insanely fun. I don’t think I can just love one medium. There are too many.

My process is a lot of mulling things over and staring. It’s also a lot of listening to music and making lists. Every comic starts out as a list, then evolves from there. I make lots of mistakes. I go through erasers very fast. I multi-task. I lose patience frequently and walk away. Then I come back and finish.

If you had to choose one artistic piece of output of yours (comic or otherwise) that would be representative of who you are to show someone who is not familiar with your work, what would it be and why?

If I had to choose one representative thing, it would be the book I made called “1,055 Minutes.” It was a year-long project that involved keeping track of all the music I was listening to, making lyrics into images, and keeping meticulous lists, all of which I love.

What makes you excited about comics / making art in general? How do your life and your comics inform one another?

Knowing I can depict or evoke certain emotions using imagery makes me excited. To me, reading comics is a very personal experience. It’s your eyes and your brain and the images in front of you and that’s it. Knowing that someone can look at my stuff and have something resonate feels special, like I’m telling the truth to that person directly, one-on-one.

Art, in any form it comes in, creates a platform for honesty for its creator. Some people take advantage of it, some don’t. I know people that couldn’t look away from the ground to tell you the truth, but could spill all their beans in a song or comic they wrote. That is one of the most exciting things about art.

As far as comic artists go: Liz Prince, Ben Snakepit, Mitch Clem/Nation of Amanda, Simon Hanselmann, Ryan Pequin, Steve Thueson, Mike Funk, Ramsey Beyer, Jeffrey Brown…more I can’t think of. It comes down to honesty and simplicity. All of these people make things in a manner that evokes all sorts of responses. They’re nothing like the insanely elaborate superhero comics that so many people start off reading; they’re human and real and you instantly know that the person that made them has a bunch of guts in their belly just like you, the reader.

If you aren’t already following Aimée on Tumblr, what are you waiting for? And while you’re at it, order your copy of As You Were: Living Situations too!