Previous Next
Interview with Rick V 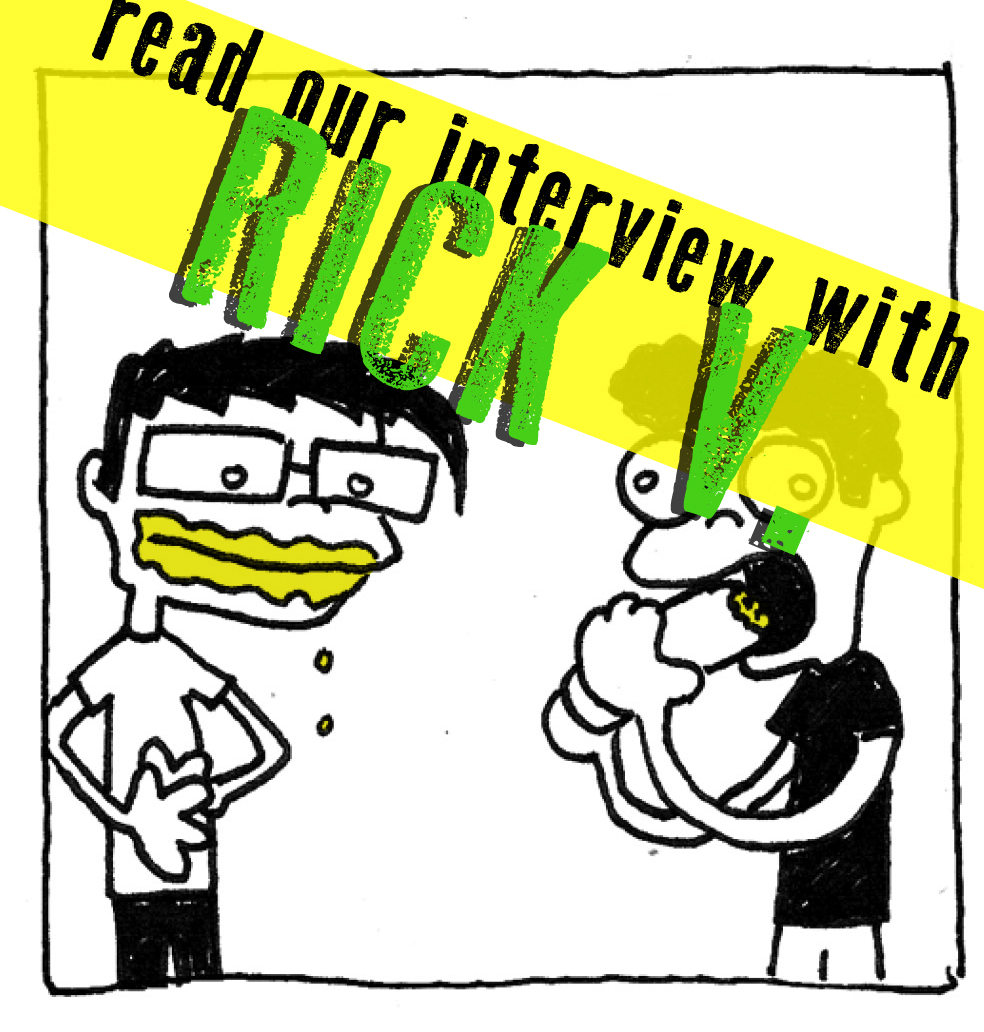 When we first interviewed Rick V at the beginning of this year, he was in the middle of season four of Star Trek: The Next Generation. In the 10 months since, he’s made it to season five, recorded some music, released a zine, beat a lot of video games, and contributed to As You Were: Living Situations. For the specifics of what’s kept him busy in 2015, keep on reading.

I did a voice for a Jimmy Buffet-style puppet for a PBS station. I’ve gotten slightly better at skateboarding. The movie screening series I do has had a lot more attendees. The band I’m in, Found Drowned, recorded a cassette and a 7″. I beat the games The Adventures of Link, A Link to the Past, Link’s Awakening, Clash at Demonhead, Monsterworld IV, and Chiki Chiki Boys.

I have been posting a comic on the Internet every Monday. Some of them are classy little gems that I came up with while staring at a blank piece of paper for a couple of hours.

Also, Lyndsey Girlfriend judged me for stating that I don’t really watch TV in that last interview. Here are shows I watch sparingly: Agents of S.H.I.E.L.D., Conan the Boy of the Future, Ghost Sweeper Mikami, Doug, Steven Universe, Tales from the Darkside, Cowboy Bebop, Doctor Who, Ash vs Evil Dead, Bob’s Burgers, and of course, Star Trek: The Next Generation. It feels so good to be honest.

You’ve got a new zine out, Nineteen 1919 Hemphill Stories. How did you go about selecting the stories you wanted to include? Can you give us a preview of what’s inside?

I reached out on the Book of Faces (Maria Bamford joke) to see if anybody could jog my memory on things that have happened at 1919. I wanted to make the stories more from my perspective than just stories overall. There could easily be a zine called Nineteen More 1919 Hemphill Stories by people who have attended and volunteered at 1919.

I gave myself a deadline by setting up a zine release show across the country at 1919 Hemphill. I made a Book of Faces event page for the release before I even started the zine. I finished it the morning before I got on the plane for Texas. The show was really good, and from what I gathered, everybody who attended got really positive vibes from my stupid stories.

Tell us about Drawlloween / Inktober! What’s your theme? What made you decide to do it? Is this your first time?

I guess I didn’t know you had to pick a theme. I just used the list from http://drawlloween.us. I thought it would be a fun exercise. And it was! I mostly just doodled out the drawings quickly without much effort. I told myself that I wouldn’t pretty them up on the computer. It’s Inktober, not Photoshoptober, right?

As You Were alumni Kett Nerd and Steve Thueson did a much more elaborate job at their Drawlloween drawings. Even though Steve bailed in the middle of the month.

Well, you’ve sure lived with a lot of people! What qualities make up a good roommate? What are total dealbreakers for you? If you had to live with yourself (not like you already do, as a person existing, but rather if you were your own roommate), what would you say are the best and worst things about that?

Clean up after yourself. Leave a room like you were never there. Dealbreakers? Smoking inside is pretty gross. Or being a drug dealer. [Having] somebody who sells drugs out of your house means constant shady characters will be in your living room.

I once couldn’t stand living with my very good friend of mine because they made disgusting eating and drinking noises. I had to put on headphones when they were dining or I would start dry heaving. Which could have possibly ruined their eating experience. I also ended up not sleeping in my own house because they snored very loud.

As a housemate, I have been criticized for playing music too loud and letting bands sleep over without much more than 10 minutes notice. I’m that guy.

What makes you excited about comics / making art in general?

You’re really committed to Star Trek: The Next Generation. But the real question is, when you finish watching the entire series, what major undertaking will you pursue next?

That might be a better question for co-writer Brett Bays:

Brett: Rick will continue his path down The Star Trek by watching the nearly-as-good-as-Next-Generation Star Trek series, Deep Space Nine, which will allow him to text me such questions as “Is Principal Snyder from Buffy a Ferengi bartender?” and “Why is Odo able to master the form of an eagle but not LIPS?”

Do I have fans? Check out my pals David Yoder, Emily Timm, and Penina Gal. I really like Richard Sala, Evan Dorkin, and Shmorky. But those don’t have much to do with my comics.

That might be a better question for Brett Bays.

I was watching TNG on my phone in a boiler room of a hospital.

So there you have it, kids. Keep up with Rick V by following his Tumblr, where you’ll see new art and get updates on things possibly happening in the next year, like a probable split zine with Cassie J. Sneider about birthdays, or a print version of “I Text Brett After Each Star Trek TNG I Watch.” While you’re at it, get yourself a copy of As You Were: Living Situations too.