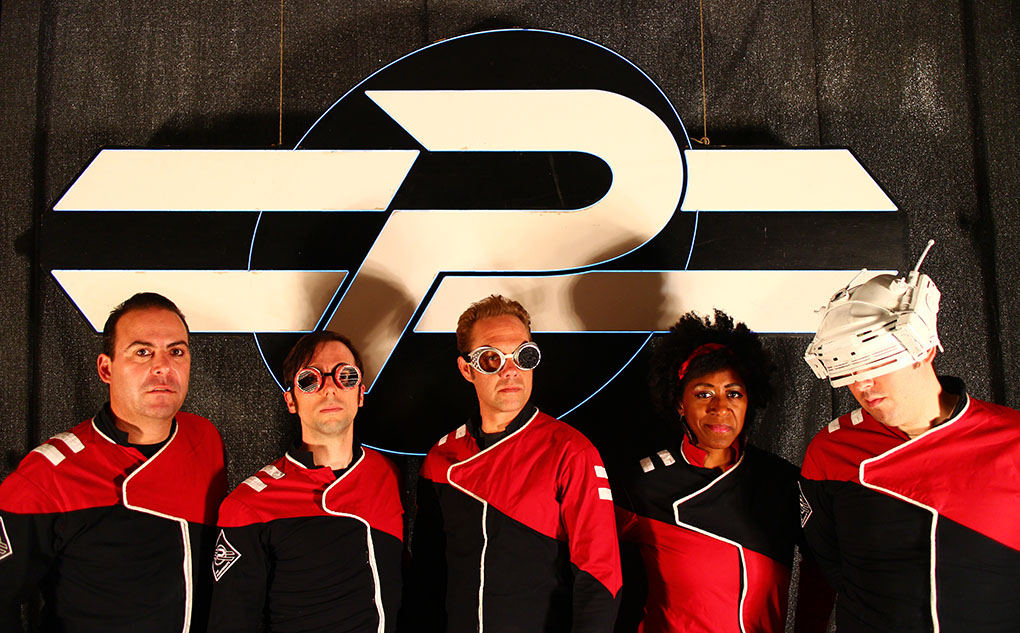 Audio and images of Tyson used with his kind permission. A portion of each record sale is being donated to the Harlem Educational Activities Fund, helping underserved young people through academic enrichment as well as social and cultural exposure. To learn more, visit heaf.org

What’s the story behind “I’m With Neil”?

Atom Bomb (bass and vocals): Commander Angel Nova was watching an episode of The Daily Show that featured Dr. Tyson. It was more than a science-related news segment; he saw a person who could explain and represent a scientific viewpoint with a contagious exuberance that made him exciting enough to be a guest on a comedy news program.

Angel Nova (guitar and vocals): This was back when John Stewart was the host, and Neil deGrasse Tyson came on and said we shouldn’t cut NASA’s budget, but we should double it. Aside from all the amazing untold scientific discoveries and exploration, it is one of the best ways to inspire everyone to work toward a better future. I was so inspired and excited by his words that by the end I was standing on my chair in my kitchen yelling “YEAH YEAH YEAH!!!”

Atom: Based on that segment, we all hoped that Neil deGrasse Tyson would become a science celebrity on the scale of Neil Armstrong. Someone who would get America as excited about science as we were during Project Apollo. For our part, we talked about how we, as Phenomenauts, could support the idea of a science celebrity by making a simple badge with a picture of Dr. Tyson and the text “I’m with Neil” to wear on stage as part of our uniforms.

Angel: I decided to write a song to pledge my allegiance to his way of thinking. We made a song with “I’m with Neil” as the chorus, and took clips of him saying particularly cool things and made them the verses. It was pretty fun. Then we invited a bunch of friends to come and dance around with us on our stage and we made a fun video.

Atom: For all of its shortcomings, the video happily promoted our “I’m with Neil” message on a greater scale. Better yet, we heard that Dr. Tyson might be a little “weirded out.” Our home movie of a bunch of friends jumping around and shouting his name had gotten his attention.

Atom: We had the idea to turn the primitive “I’m with Neil” jingle into an actual song to be included on our (then) upcoming full-length album, and asked the hero of the song to collaborate. Dr. Tyson declined to be directly involved, but encouraged us none the less to use his publicly available image and words, and suggested that we donate a portion of the proceeds to the Harlem Educational Activities Fund, an educational non-profit he’s involved with, serving as a member of their board of trustees.

The re-written “I’m With Neil” song wasn’t ready on time for our new “Escape Velocity” album, but we felt it was fitting that the new song have its own pressing. Not only were we able to refactor the song into something new and great, but we were also able to make another jingle-turned-song about our favorite radio program, Science Friday, and include both of them on a really cool looking picture disc.

With downloaded music being so practical, the picture disc is there as a keepsake for the music collector and an added bonus for people who want to help contribute to HEAF. We’re all excited to share it with rock and roll and science fans alike.

How about “Every Day Is Science Friday”?

Angel: One day as I was listening to the radio, I realized that a tribute song to the public radio show, Science Friday, would be a perfect match for our (“I’m With Neil”) song.

Atom: Science Friday is an almost guilty pleasure. Basically, it’s a science class for people with short attention spans. I listen to Science Friday the same way I used to listen to Dr. Demento: regularly and privately. Then, after listening, I find myself talking about the program with friends and sometimes complete strangers with whom I suddenly have an odd tidbit of knowledge or a viewpoint in common.

Angel: If you don’t know the show, it’s a fantastic, entertaining, and educational show that I get upset about if I miss it. It is audio for smart people, and for people who want to be smart people.

Atom: Science Friday is Sunday School for the kind of misfit that I want to be.

What does it mean to be “with Neil”?

Atom: Dr. Tyson promotes science, education, exploration, and progress, and anyone who is with that agenda is with Neil.

Angel: I get so frustrated with shortsighted nitwits who ask “Why should we explore the Universe when we still have problems here on Earth?” Neil puts it in a way that even people like that can understand and be inspired by. He has a remarkably contagious child-like wonder and excitement about learning and exploring the Universe.

Atom: While Neil deGrasse Tyson may not be single-handedly solving the world’s pollution problem or curing cancer, he might very well inspire the person who does. Dr. Tyson is extremely charismatic, and that helps him get science and science education the funding and attention it needs.

Why is science important to you?

Atom: The Phenomenauts have so much music about space and science because we’re all excited and inspired by science. We’re not just excited about knowing how the world works but also by the prospect of using that knowledge to make tomorrow better than today. The impact of science goes way beyond the simple application of research and technology. Knowing how things work and knowing that things can be better motivates people to think about how to make the future a place we want to live.

[Get your copy of the EP now from Silver Sprocket]