Previous Next
Interview with Rachel Dukes 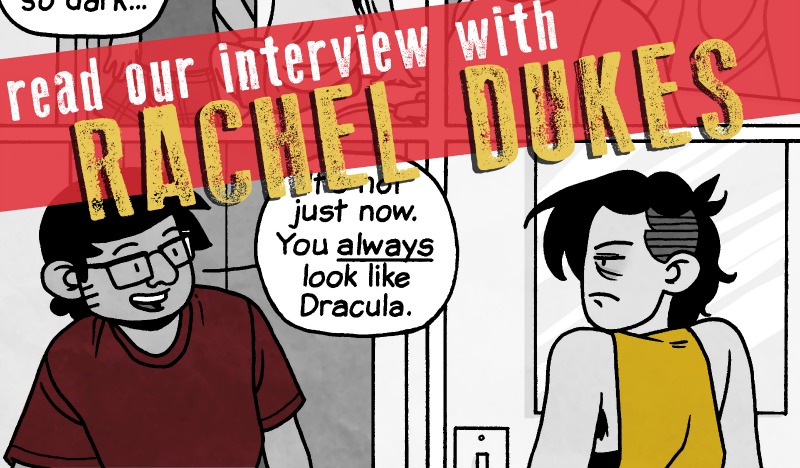 All of our As You Were contributors keep busy with multiple artistic projects, and Rachel Dukes of Mixtape Comics is no exception. To learn more about her cat, find out what it’s like working for BOOM! Studios, and get the details on Dukes’ forthcoming graphic novel, keep reading.

I started contributing to As You Were because Mitch invited me. I’ve been following Mitch’s work online since early Nothing Nice to Say, have been friends with Avi from Silver Sprocket for a few years, and a ton of my favorite cartoonists are also attached to As You Were (Liz Prince, Andy Warner, Sarah Graley), so there was no way I would turn that invitation down. 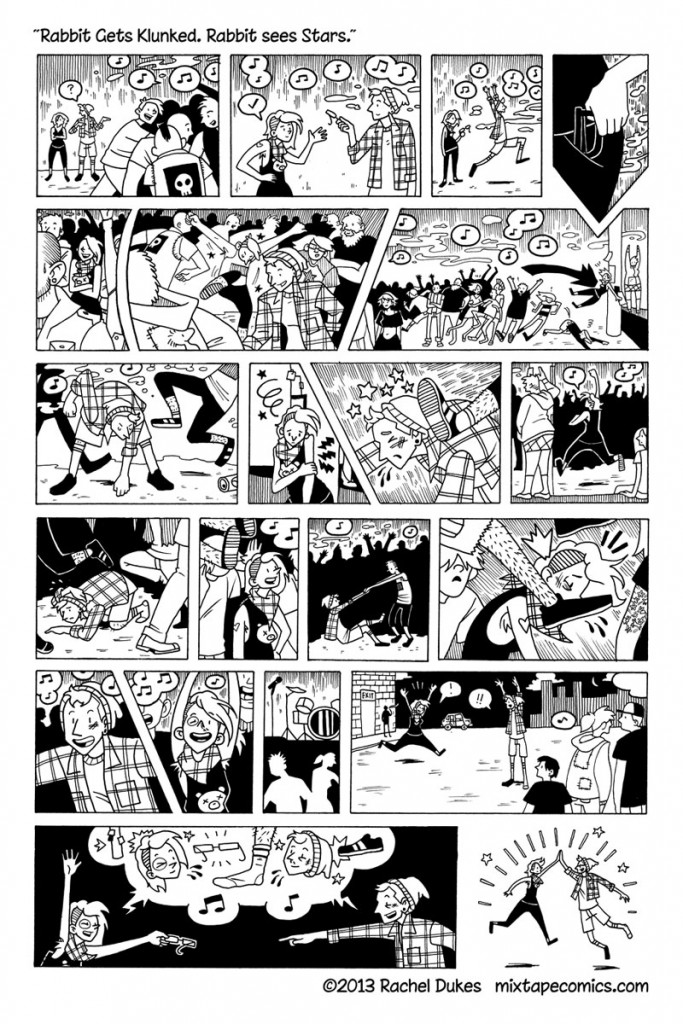 You are in a million anthologies and zines all over the place. But you’ve also got a (secret) solo book coming out next year. How is that coming along? What can you tell us about it?

The solo project I’m “secretly” working on for a 2017 release is a 170+ page graphic novel titled Let Me Walk You Home. Narratively, it’s about the aftermath of a female student being sexually assaulted on a college campus, and how it impacts her relationship and friendships, with a realistic telling of the recovery process from trauma… Thematically, it’s about self-empowerment, self-advocacy, and how you can survive traumatic events with your self intact.

The book is drawn and was originally going to be published in 2016 by Abrams Books, but there were a series of unfortunate setbacks that lead to the book’s cancellation at the last minute. I recently bought the rights back and am going to retool it for a few months before I find it a new home or move to self-publish it.

I’m currently finishing up Frankie Comics #4 (shipping later this month), talking with a couple of my favorite publishers about printing a large full-color collection of Frankie Comics issues 1-4, and drawing a four-page back-up story for Care Bears. I recently drew 50 pages for the upcoming Steven Universe graphic novel Steven Universe: Too Cool for School, and I contributed to a 13-page comic for the upcoming queer superhero anthology Oath. Those should both be available soon. 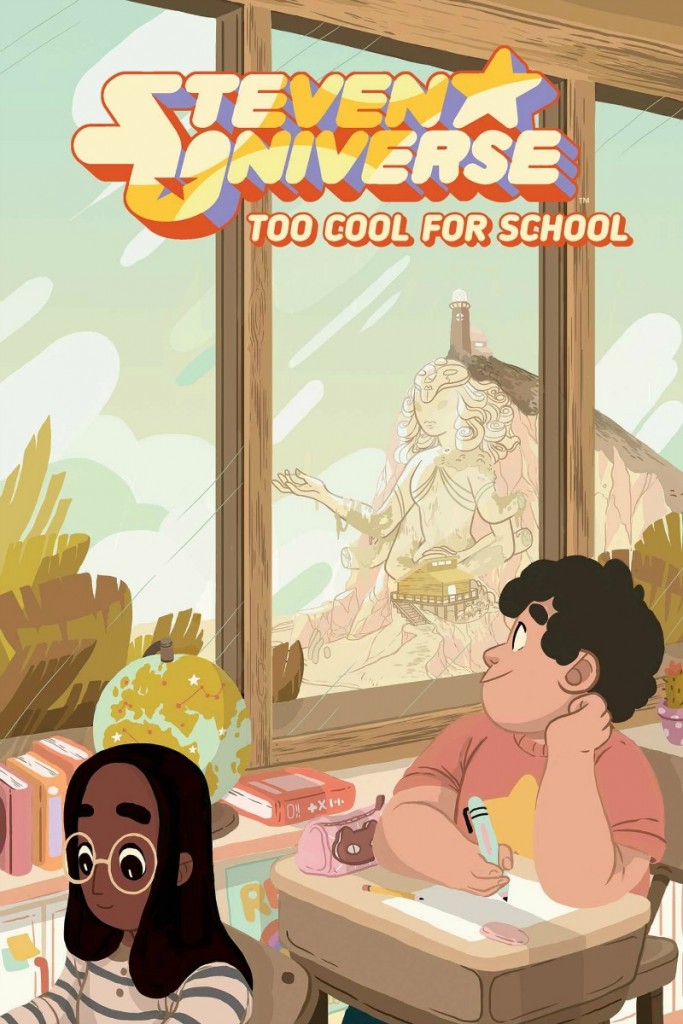 We appreciate your comics directly dealing with “taboo” topics like queerness and sex without it being a “big deal.” Does this reflect on your own values, or is this more political as fan fic for the world you’d like to see?

You know, we self-select our friends and influences as they fall in line with our personal beliefs. My good friends are mostly queer, non-binary, and poly, so my comics will reflect that.

That being said, any casual regard toward sex or sexual identity / expression in my comics stems from my own values and experiences. I feel like living your life honestly isn’t something that anyone should be judged negatively for.

My family’s roots are midwestern conservative. Spending time with my extended family reminds me that my experiences within my friends group are blessed and unique, and that there is still very much a need for political fan fic and stories about the world that we want to exist in.

Even with queer issues becoming a part of the larger conversation in our culture, we still have a long way to go. The majority of the American public isn’t even comfortable with feminine sexuality—which is so basic!—so it’s going to be a while longer until they’re comfortable with the idea of sexuality and gender being fluid. Until then, the best we can all do is be honest with ourselves and in our art. People will catch up. 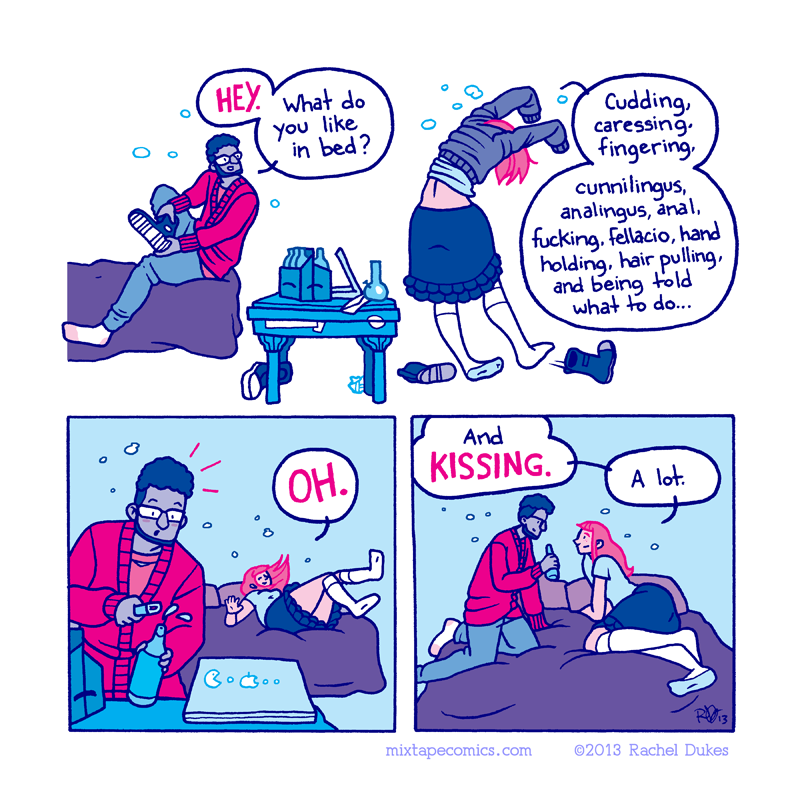 You’ve got four volumes of comics about your cat, Frankie. Do you ever feel like you’ll run out of material? And how do you decide what to draw?

I don’t think I’ll ever run out of material—Frankie is hilarious—but I do feel like I repeat the same type of jokes. (How many jokes can you tell about a cat enjoying human food, right?) Part of that is learning what my voice is within the context of the jokes and the characters. For instance, I have a lot of set ups for jokes where if Frankie could talk the punchline would be a witty or sarcastic quip. But since Frankie doesn’t talk in the series, I have to find other ways to tell the joke, or other jokes to tell.

I take notes day-to-day as things happen. Sometimes she plays a whole comic right out in front of me as it ends up on the page, while other times I have to shorten the experiences (something that will play out over a couple instances becomes one story), or build off of a silly moment (she was playing with my keys)… I’ll usually have a little sketchpad nearby and will collect 10-20 ideas before I have a chance to go back and flesh them out and draw the final strips.

Has having some comics go “Internet Famous” changed anything for you? You’ve talked about the downside of work being shared uncredited. Do you have anything you want to include on that? On the flipside, what are some positives of your work becoming more widespread?

I’m not sure I have much to say about the negative impact of the “Life with/out A Cat” strip having gone viral with the credits removed that wasn’t covered in my original write-up. But it’s been three years since it happened and I still have folks come up to me at conventions (for the very first time) saying, “Oh! Did you draw that? I JUST saw that on Facebook! I didn’t know a person actually drew it! Cool!” Then they’ll usually buy a $3 book. That’s pretty cool of them.

It’s difficult to discuss internet “fame” because the experiences are so varied. My experience is different from Nation of Amanda’s, which is different than Kate Beaton’s, which is different than Kate Leth’s, and so on. Even when a strip goes viral with your name attached, it’s rare that folks reading the strip will remember it or seek out the rest of your work. How many cartoonists are household names, really? My family doesn’t know who Jim Davis, Bill Watterson, or Charles Schulz are—but they certainly recognize Garfield, Calvin and Hobbes, and Charlie Brown. So the work may be recognizable. That proves useful over time—like that recognition and $3 sale noted above. Eventually—hopefully—that recognition grows more common over time.

What’s it like getting to work on such rad shit over at BOOM! Studios, like those Adventure Time and Lumberjanes covers? How did you come into that job? What other kinds of things do you do there? What’s your absolute dream job?

It’s super great being able to work on licensed properties that I love. BOOM! has given me several opportunities to draw covers and comics featuring characters that I absolutely adore, and I’ll always be stoked to do that.

Working with BOOM! is something I’ve been wanting to do for a long while (since they started acquiring Cartoon Network properties), but the actuality of it happening was mostly an accident. I had a couple friends who had been working there who were leaving for other opportunities. When my friends left, my partner applied for a job and was hired on the design staff. Shortly after he started, he was asked if he knew anyone who could quickly turn around a variant cover for Adventure Time with Fionna and Cake. He immediately suggested me (along with other rad freelancing pals like Sophie Goldstein and Cole Closser), I drew that cover, and I’ve been testing (trying out) for properties and filling in for quick jobs when needed ever since.

I’ve done a handful of things for BOOM!, but it’s mostly variant covers (Fionna and Cake, Lumberjanes, Over The Garden Wall) and short / back-up stories (Garfield, Steven Universe). Being able to work on Steven Universe: Too Cool for School was the most surreal thing!

Absolute dream job at BOOM!? I would love to do more work for Lumberjanes, Steven, and Over The Garden Wall… but I guess my ultimate goal is always original, creator-owned work. Hopefully I’ll get around to submitting a pitch packet for something cool with them this year! 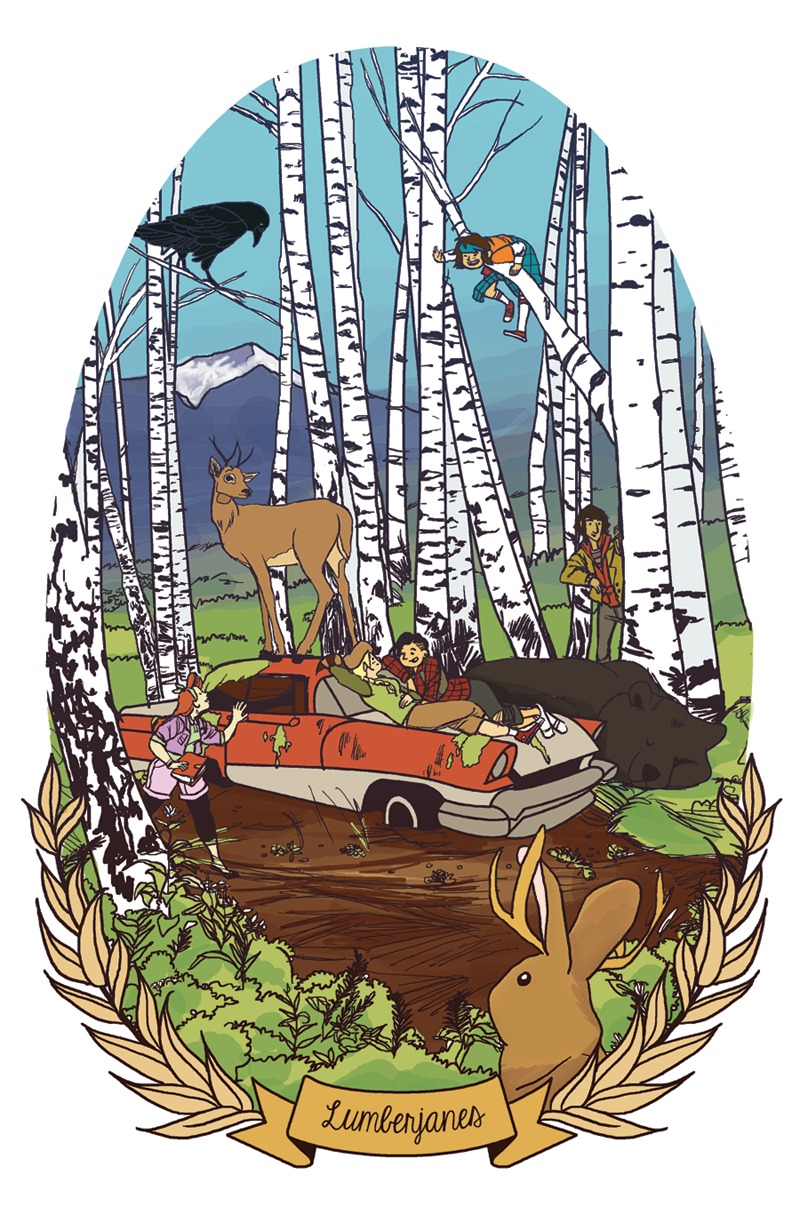 Tell us about No Gods, No Dungeon Masters. How did you get mixed up with that thrash ork, Ion O’Clast?

I met Ion a few years ago at Comic Con international (2009 I think) when they were cosplaying as crust-punk Finn (from Adventure Time) and was immediately endeared. Ion and I started hanging more regularly within the last three years, as I’ve been making frequent trips up to the San Francisco area for conventions, zine fests, and assorted good times.

No Gods, No Dungeon Masters first started with an anthology put out by Ninth Art Press; they were publishing an anthology about various subcultures and I knew I wanted to pitch for it but I didn’t have any ideas right away. I reached out to Avi and asked if they wanted to write something or could recommend someone who might have an idea. Avi paired Ion and I together. Almost immediately, Ion emailed me a gigantic unreadable tome of amazing ramblings about how gender, anarcho-punk, and nerd culture can overlap and co-exist. We created the first version of the story during the summer of 2014. Later that fall, Ion wanted to revisit it and add some bonus pages, in order to print it as a mini-comic. We reworked the story a bit and will publish the final version of the story with Silver Sprocket in the summer of 2016. 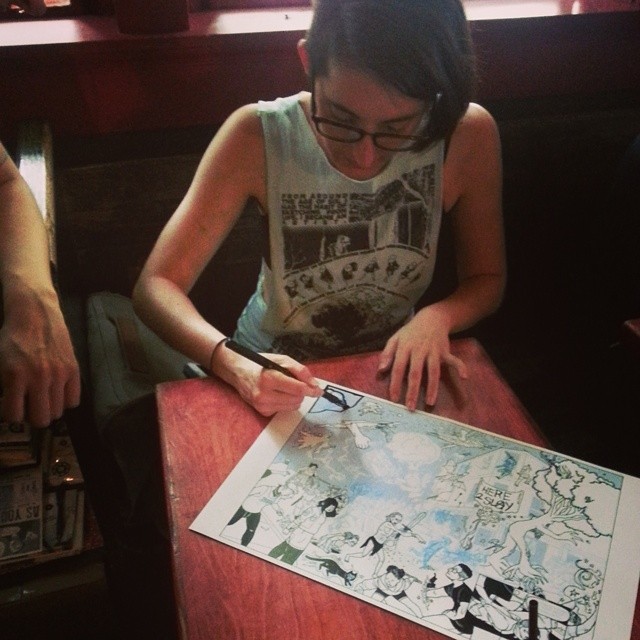 I would hand potential friends Frankie Comics #1. It’s an easy primer for all the childlike and dorky things I’ll say and do when my guard is down. I’m going to talk about my cat like she’s a person. Sorry new friends—don’t say I didn’t warn you!

Dear readers: please Google all the cartoonists I already mentioned. In addition to those above, I would recommend Mathew New, Eleri Mai Harris, Luke Howard, Luke Healy, and Mike King. 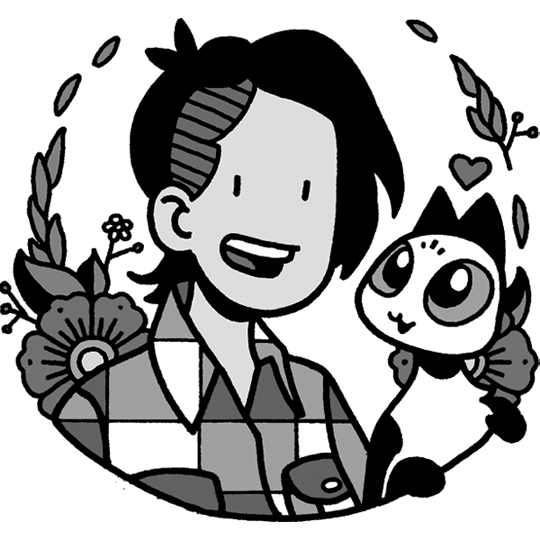 Now that you’ve gotten to know more about Dukes, pick up a copy of As You Were: Living Situations and check out her piece inside. You’ll also find some more rad shit—which you can buy too—over at Mixtape Comics.