Previous Next
Interview with Wyeth Yates

While many artists like to experiment with new technology and digital tools, As You Were contributor Wyeth Yates likes to keep it old school. Keep reading to find out about his fear of deep, dark voids; how he came to be a cat owner in spite of being a dog person; and the reasons behind the limited use of color in his art.

I got involved with AYW through my friend Alex Krokus, who gave Avi my contact information. I had about a week to pull something together before the deadline, and between that and my other work, I wasn’t sure I would make the cut. But I found some time and came up with a story I liked. So I decided to make it really short and sweet and cranked through it in a day.

Usually I draw comics for fun, hahaaa. That’s changed a bit since I started working as a freelance artist. I’ve had to find other outlets so I don’t burn myself out. I like to read books and search the Internet for music I like, and I’m half-assedly learning (read: strangling) my roommate’s guitar.

What is your process like? What tools do you use? You also seem to limit your palette to a handful of colors for each piece—how do you decide which colors to use?

My process has gone through a few incarnations. I used to be regimented to the point of formalism; I’d plan my comics to death to make sure they were as perfect as they could be structurally before going to final. But planning so much took away the fun of actually drawing, so I tried to ease up and allow my process to be looser. Less planning, more spontaneity. So far that seems to be the ticket.

I work almost entirely traditionally. Pencils, then brush and ink. I use Faber-Castell pens for straight lines and panel borders and lettering. I color digitally, and I will often make corrections or clean my work up that way, but otherwise I like to work on paper and get my hands dirty.

My reason for limiting palettes has had a lot to do with being partially colorblind. For a long time, coloring my work was really daunting, and I’d constantly be second guessing my choices. I found that a limited palette was a good way to ease into it.

I’ve now clocked enough hours coloring personal and professional work that I don’t really feel scared by color; I’ve actually gotten more work as a colorist than anything else so far. I think my skewed color sense winds up working to my advantage most of the time, too. Clients and peers tell me my choices are really strange, but they work, so that’s cool.

Sometimes I get stuck though—I once spent 10 hours flatting a cover over and over because I was using one color that didn’t compliment the others and couldn’t tell. I had to ask a friend with normal eyes for help. I wish I’d asked sooner. Lesson learned! 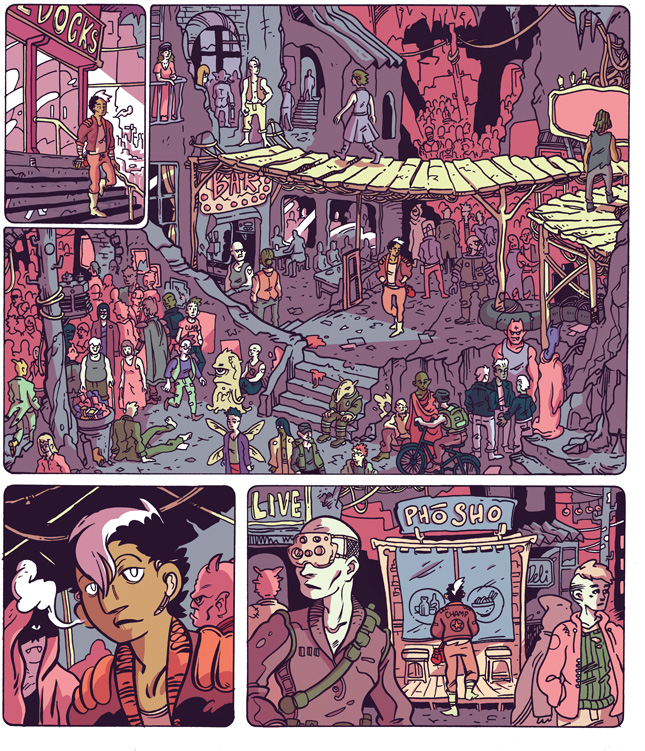 When did you know that you wanted to draw comics for a living?

I’ve known I wanted to draw comics professionally since I was really young. My earliest comics were done in marble notebooks, straight to ink with those felt-tipped Flair pens you can get anywhere. If I did a drawing that looked bad, I’d put an “X” through it and redraw the panel right next to it. I remember bringing one of those notebook to see Disney’s “Atlantis” (which came out in 2001, I think?). If that’s right, I was 10. So I think I knew what I wanted pretty early on.

You have a BFA in Cartooning, which is rad! What’s the most important or best thing you learned about art while you were studying?

I got a LOT of great advice while studying comics. These are a few off the top of my head, from comic pros and an editor or two:

2. Whatever you dislike about your work is nothing drawing 700 pages can’t fix.

3. With a good night’s sleep and a good meal, you’d be surprised what you can get done in a short amount of time.

(Number 4 will most likely be my epitaph.) 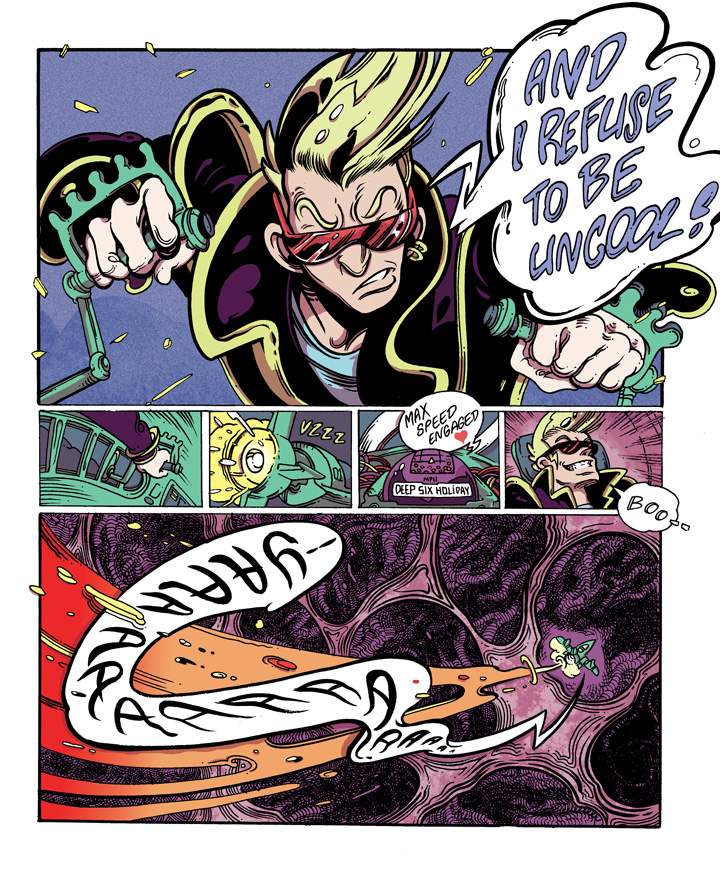 Your comic, Hard Luck, has an intriguing premise. What can you tell us about it?

Hard Luck is about an art thief in the future who is terrible at stealing paintings but always gets away with the crime. There are alien princesses, totalitarian police states, and two lovers who can’t exist in the same place at the same time all mixed together into a sci-fi adventure that’s a fun ride with a lot of heart.

The idea for Hard Luck kinda just manifested itself on paper. I was in a really bad place in my life and wanted to make a comic that I just sat down and drew, and that was funny. All the comics I made in my marble notebooks when I was younger were funny, and somewhere along the way, I lost that. I got this idea in my head that comics had to always be serious business, which is bullshit. I wanted to remind myself why I’d gotten into the medium in the first place, so I sat down and just drew the first issue of Hard Luck. No planning, no scripting, no thumbnails or designs. I didn’t even think I’d do a second issue, but some friends in the industry convinced me to. And now I’m 100 pages into a graphic novel of it, and have been pitching to publishers with positive responses. Go figure.

In regards to using space as a setting a lot, I think it has to do with being both fascinated and terrified by it. I’m really scared of sunken ships and other man-made things that are found underwater; space evokes the same fears. There’s something enthralling but terrifying to me about deep, dark voids. It feels like humans aren’t supposed to be there. Space is no exception.

For some reason, an overwhelming amount of As You Were contributors, yourself included, seem to be cat people. Why do you think that is? What can you share with us about your cat?

Gosh, cats. CATS. I don’t consider myself a cat person at all. I really love dogs, honestly. My cat was a stray who just kinda wandered into my life. I was living in a street level apartment and she must’ve seen my light was on one night. She started meowing at the window, and I went out and said hi. She was so friendly and sweet that I walked with her up the block and got her a few tins of food from the deli. After repeated visits I let her into my room. She spent the whole first night turning my lights on and off, so I named her Switch.

I’m actually allergic to cats, so the first month I had her I was really sick. But I’d lived with cats before and knew it would subside, and it did. I do get colds more than I used to, though. I’m probably constantly bashing my immune system to bits. But it’s worth it, I think. She’s a sweetheart… when she wants to be. 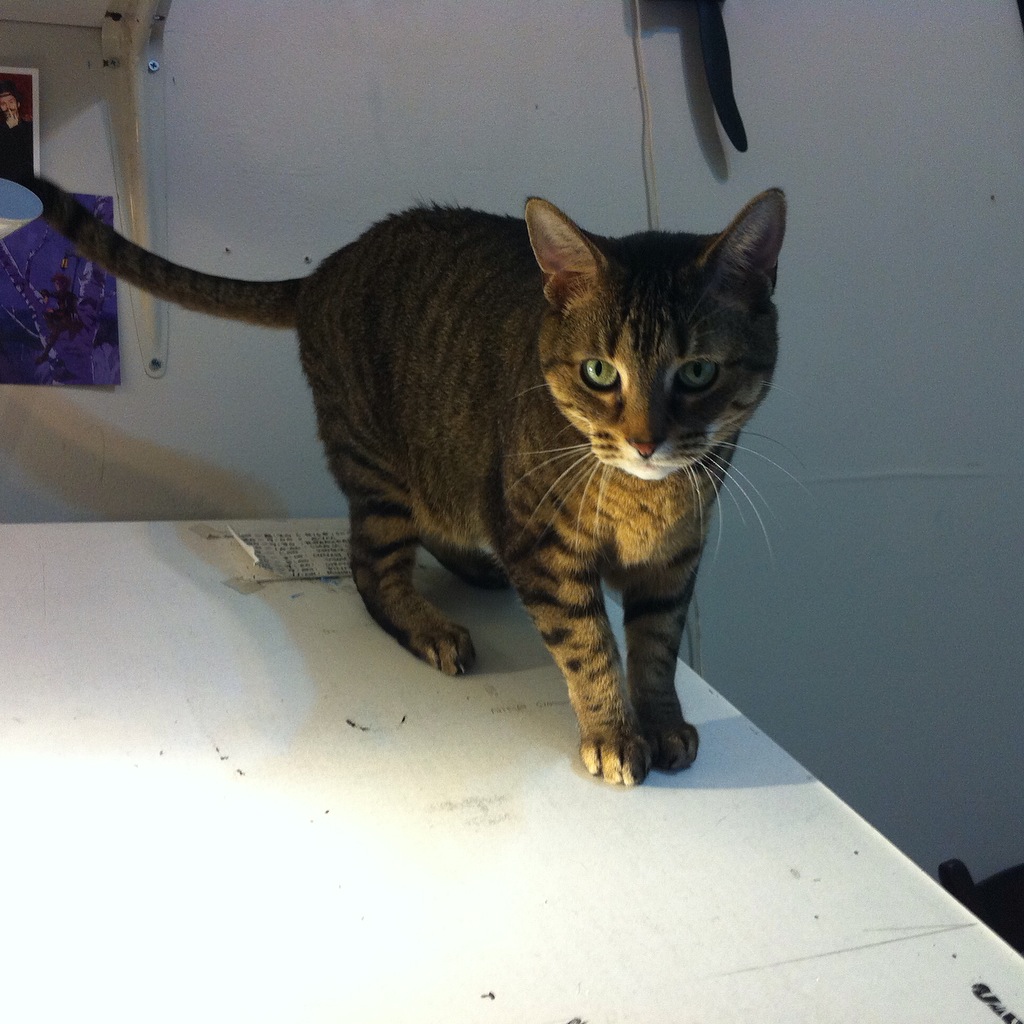 So 2016 is looking like it’s gonna be a good year for my work. I’m going to be putting out the third issue of Hard Luck, and there are a few projects lining up on the horizon after that. I can’t talk about those quite just yet, though. I’d really like to get back into working with watercolors, and to start up with silkscreening again. Making a bunch of big silkscreen prints would be a blast. Maybe a watercolored comic? Who knows. I also have a story I’d really like to pitch to an animation studio. Projects projects projects.

HMMM. That’s a hard one. I think certain excerpts from my comics, probably. There’s a sequence at the end of book 2 of an older comic of mine called The Other Gang that I thought was really strong in the storytelling/drawing—but that’s about two years old now. I think it might be an illustration I did a while back called The Paper Castle. That’s a really quiet piece that I think tells a good story and is a nice drawing all in one image. I liked making that one. 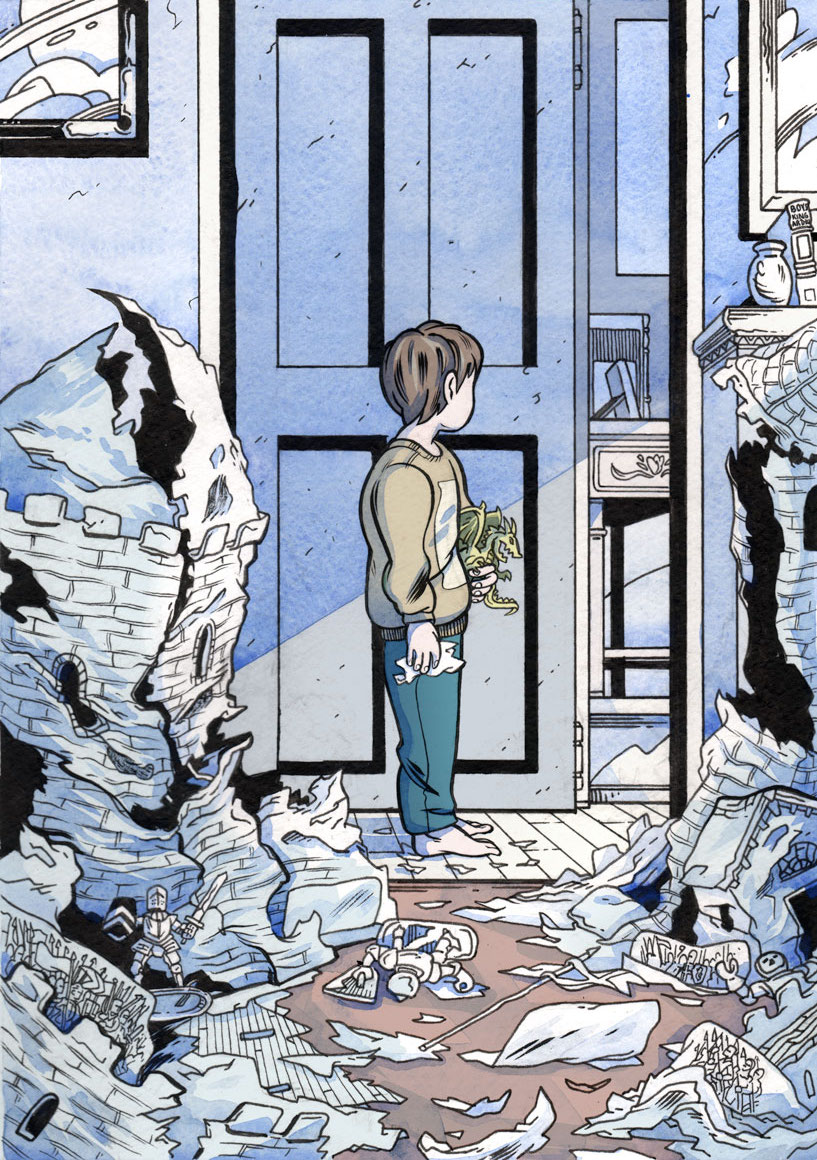 Here’s a quick list of comics (in no particular order) you should check out if you like my work, because they’ve given me a swift kick in the feelings at one point or another: 1. Akira by Katsuhiro Otomo 2. Asterios Polyp / City of Glass / Rubber Blanket #1-#3* by David Mazzuchelli 3. How To Be Happy by Eleanor Davis 4. This One Summer by Mariko Tamaki & Jillian Tamaki 5. Krazy & Ignatz by George Herriman 6. Love & Rockets by Los Bros Hernandez 7. Ranma 1/2 by Rumiko Takahashi 8. Bandette, by Colleen Coover & Paul Tobin 9. Blue Pills, by Frederik Peeters *(specifically “Discovering America” from Rubber Blanket #2, but best of luck getting your hands on a copy, I haven’t yet)*

A question nobody has ever asked me? Huh, I don’t know, that’s a tough one. When comics life gets really tough, I often ask myself “Why don’t I just stop?” As in, why not quit? The industry is crazy and the pay is low and the workloads are massive and the deadlines are practically fatal. I could be out doing other things with my time, so why this?

I don’t have an answer for that question, which is probably best, because if I did I bet you I’d have quit comics a while ago. I just know that I have to get up every morning, sit down, and make something. And then when that’s done, I have to get busy making more things. 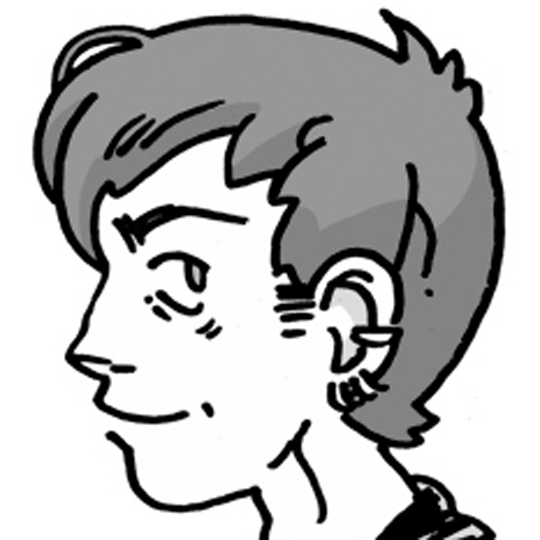 Haven’t seen Wyeth’s comic yet? Get your copy of As You Were: Living Situations right over here. And to check out more of his work, head over to his website or follow him on Twitter.