Previous Next
“August Before 3rd Grade” by Miles Honey

Today’s comic, “August Before 3rd Grade” by Miles Honey, is about selling carrots to pay off library fines. 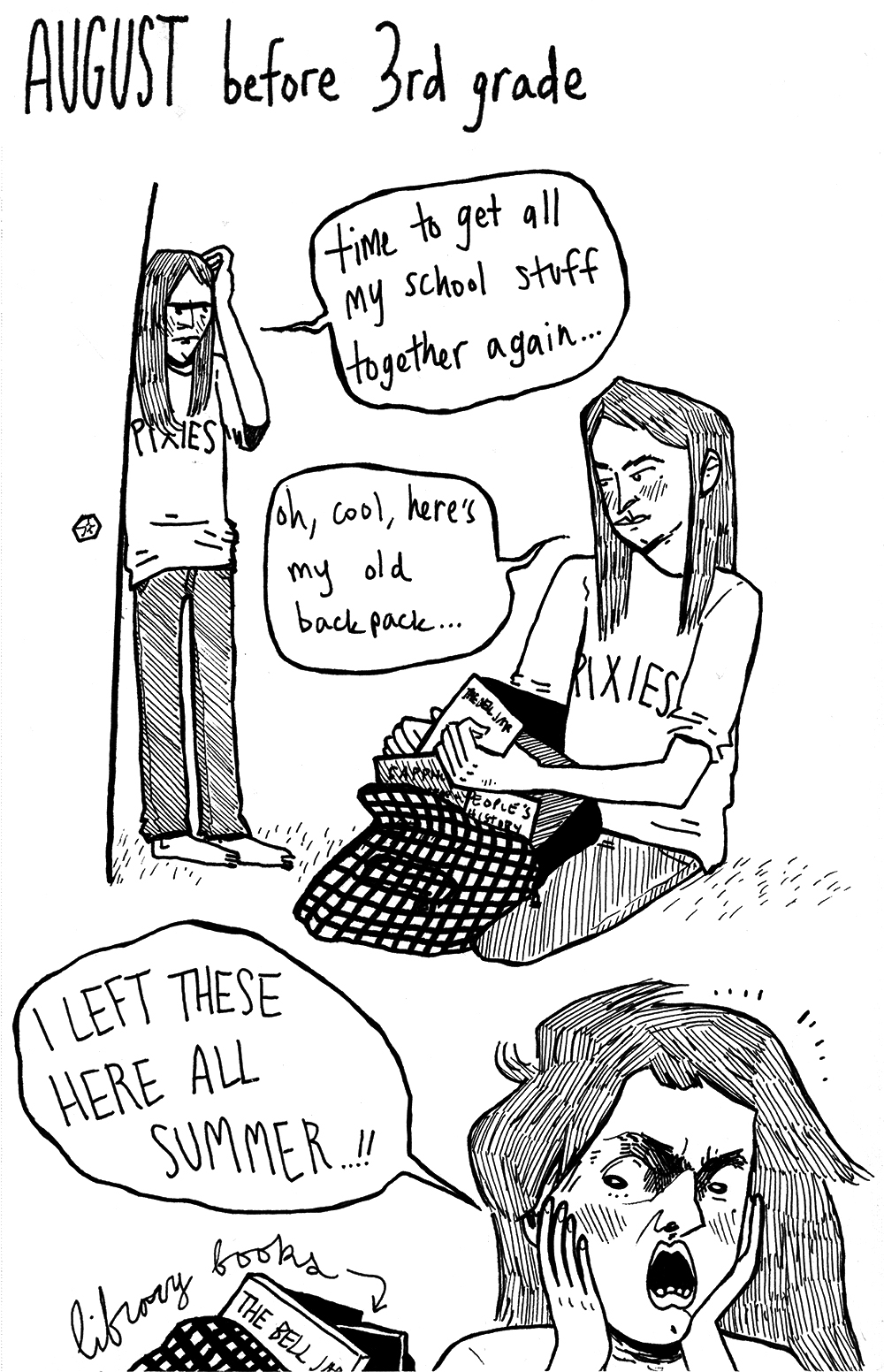 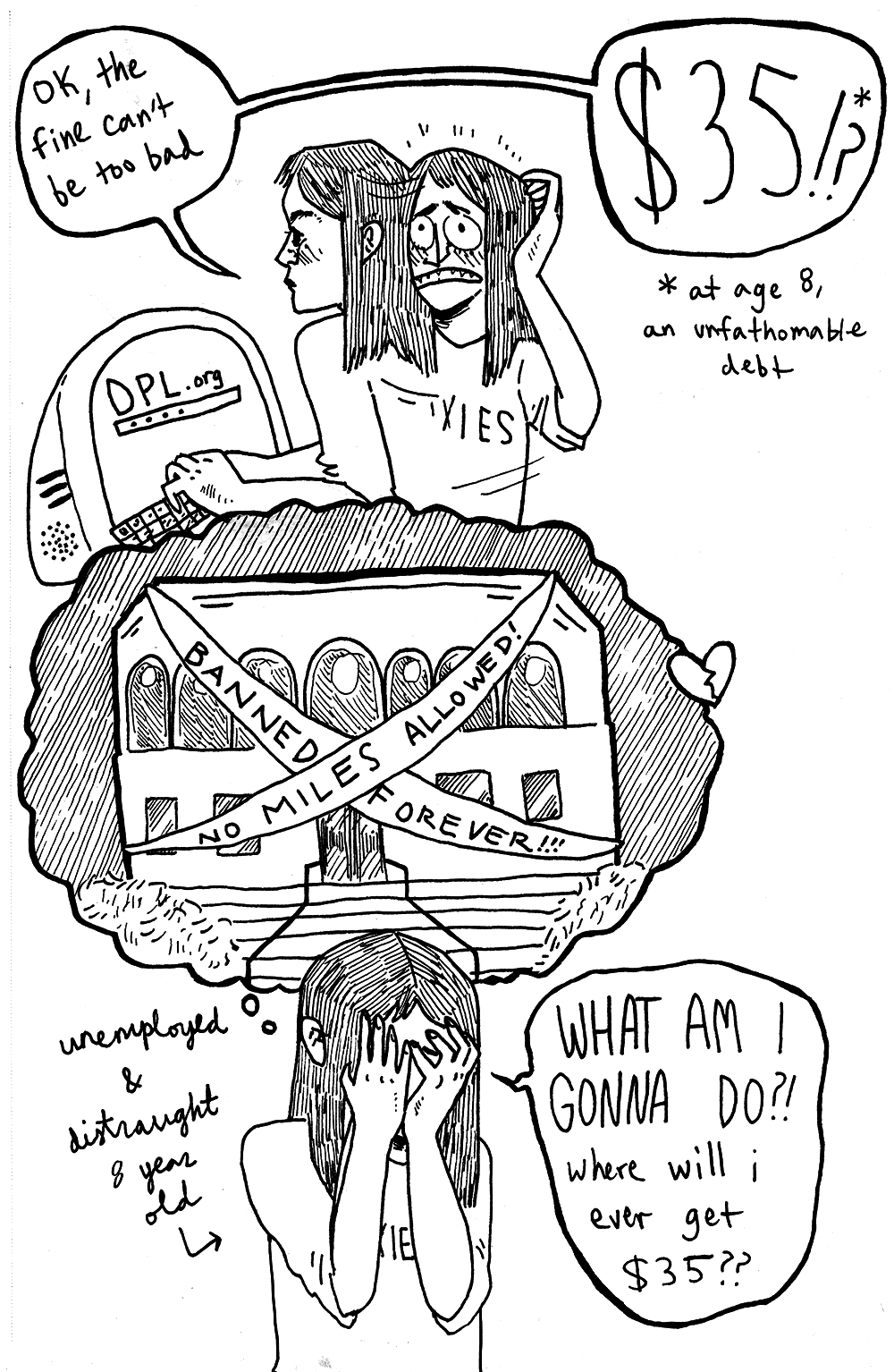 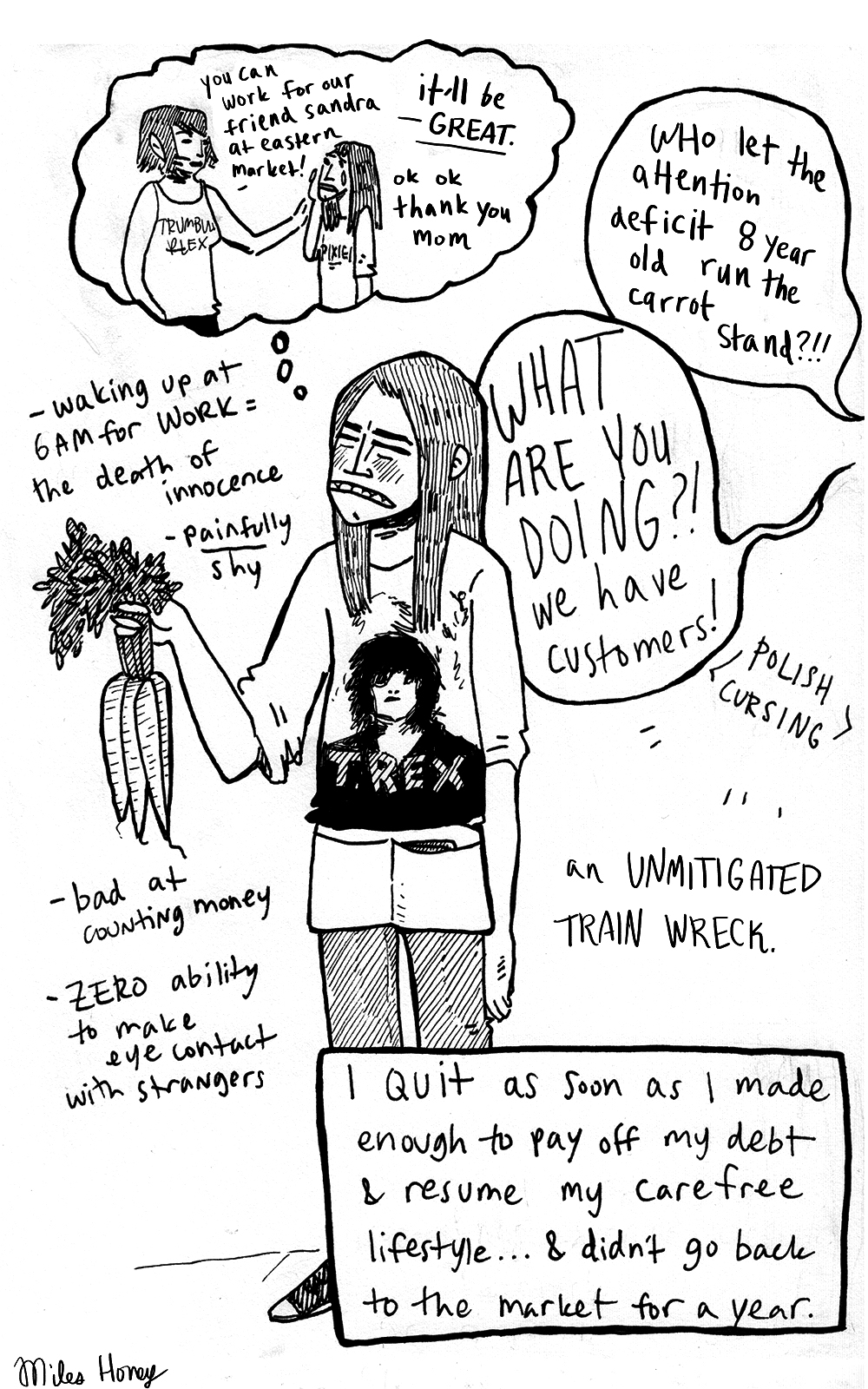 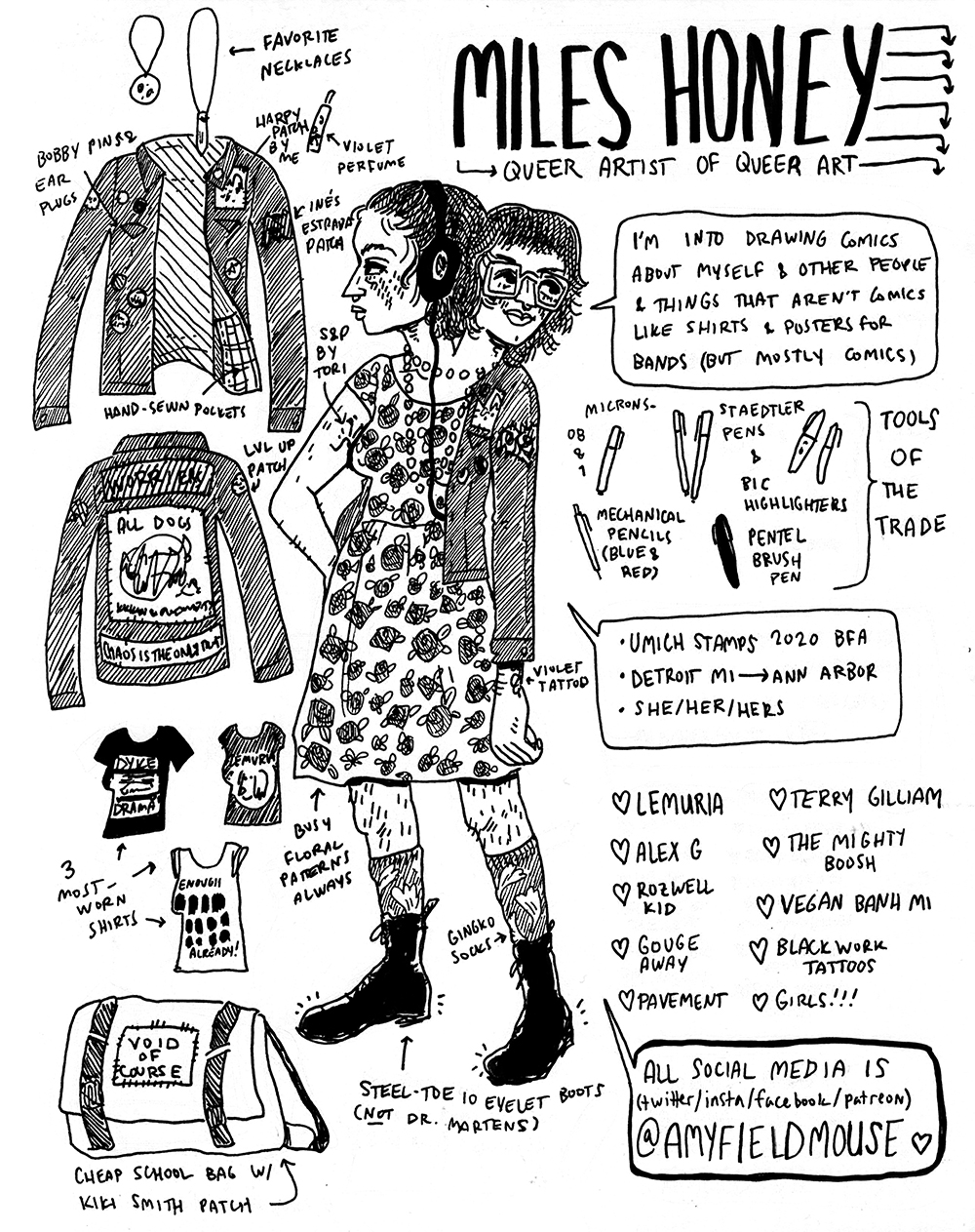 Interview with Miles Honey by Natalye Childress for Silver Sprocket

I think I worked there for like the whole summer, which makes me wonder how much I was getting paid. I remember being pissed that I had to buy sneakers because I was on my feet all day and wearing boots hurt too much.

I picked this one to do a comic about because it was actually the closest thing to a real job I’d ever had at that point, besides working part-time at the museum [mentioned below], which I was still doing. I could do something really poignant about calling rich alumni to beg for money now.

The best job I’ve ever had was working at a small contemporary art museum in Detroit called MOCAD — I worked there when I was 16 and 17 with a dozen other high schoolers doing event planning for local teenagers. It was actually not as art-focused as you’d think — there were some workshop events but also a lot of movie nights and video game tournaments.

Having to get a real job after that kind of sucked. I work at a call center basically telemarketing for my college now, and I really miss getting paid to torrent X-Men movies. At least none of my coworkers are 13 now, though.

I totally cannot imagine being anything but an artist. Almost everyone in my life is an artist in some form and it manifests in everything about people — the way you communicate, the way you think, the way you dress, the stuff you like. Art is such a great vehicle for collaboration — as someone whose entire life is music, having that natural exchange is amazing.

There are downsides, though. Because I started out doing lots of freelance when I was like 16, tons of people figured out they could rip me off because I was young and dumb, especially musicians and people who I respected. I’ve learned not to tell people too many times that I’d be honored to work with them — that doesn’t mean I don’t need to get paid too!

I think everyone who contributes to society in any way does. At the very least, there’s a responsibility to think about the things you put into the world. If you’re not making work that actively speaks out against bigotry, make sure your work at least doesn’t reinforce bigotry, is my philosophy. It’s complicated, though, because bigotry is so wired into societal norms.

What I really think about is the way I draw people, because that’s what most of my work focuses on. I never saw different body types and races and presentations in the art I drew inspiration from, so I never represented it in my work either until I was maybe 15 or 16 and realized how bad that was. It sucks — a lot of my favorite artists are still guilty of that, especially the way women are drawn. I saw a great Nicole Miles comic recently called How I Learned To Draw Black People Like Me that really resonated with me. I have a lot of respect for artists who take the initiative to work against the norm and include more representation.

Since January I’ve been trying to do a comic every day and that’s been cool. I tried it last year and only made it through a month, so I’ve scaled back on my expectations, and sometimes if I’m busy I’ll go a few days without one. I post them all up for subscribers on my Patreon, and all of last year’s are on my site.

Other than that, I’m planning on doing some more longer comics when classes let out and printing those into physical zines, which I haven’t done in a long time. I’ve also been doing a lot of freelance lately, mostly shirts and stuff for bands. I did a shirt for CUTTERS and that’ll be printed in the near future, which I’m really stoked on. I’m always looking for more musicians to work with! It’s my favorite thing about being an artist.

I don’t have any other comics in print available right now, but most of my work is online at amyfieldmouse.com. As far as other artists, I really love Rayne Klar’s work — they had a comic in As You Were #5 too, and they’ve been a longtime friend and inspiration. Cristy C. Road’s memoir Spit and Passion changed my life. Marjane Satrapi’s Persepolis, Ulli Lust’s Today is the Last Day of the Rest of Your Life, anything by Phoebe Gloeckner. Those are all my biggest inspirations.