Today’s comic, “Punk Rock Resume” by Jim Kettner, is about one punk’s path to being an artist. 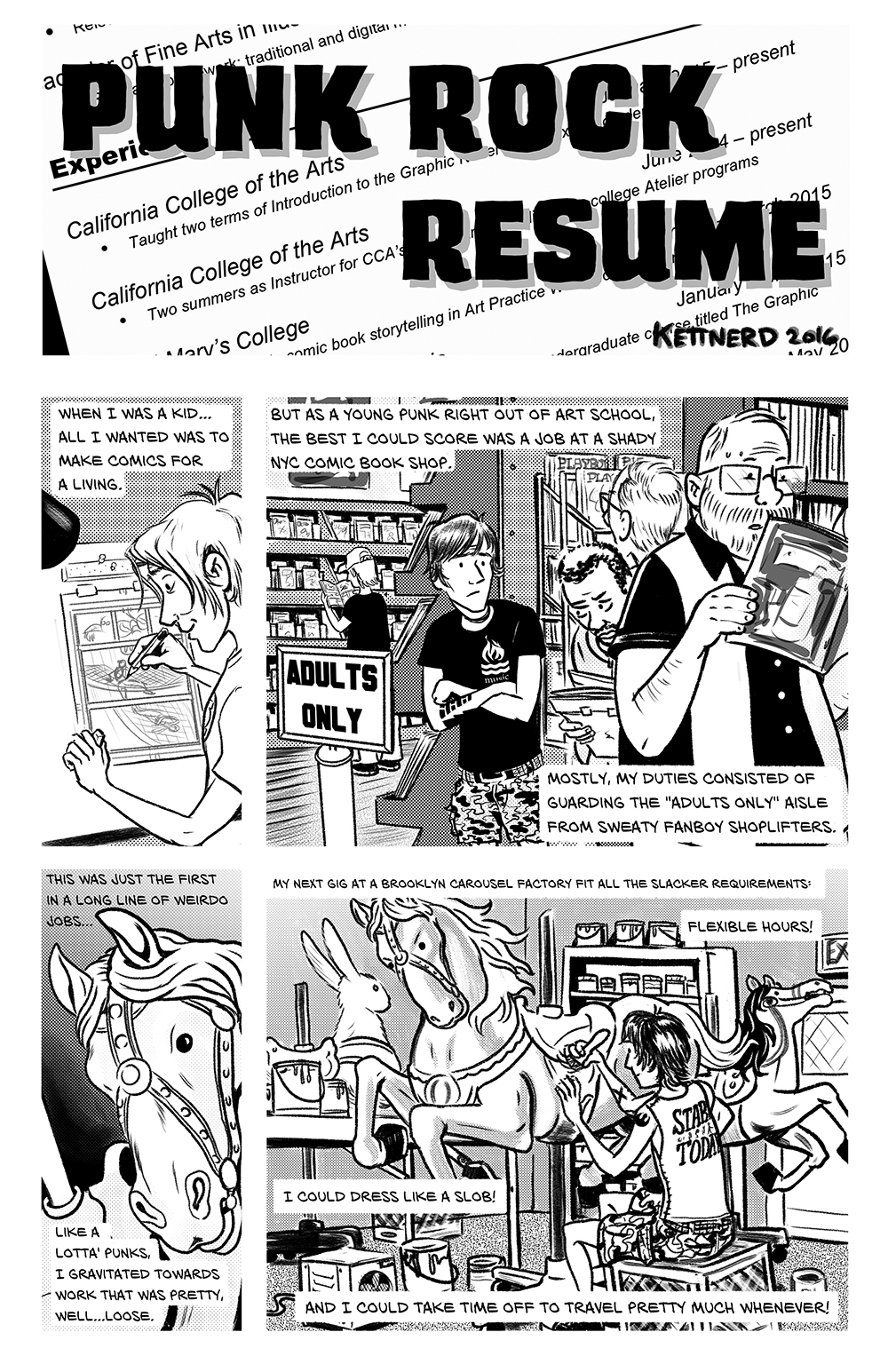 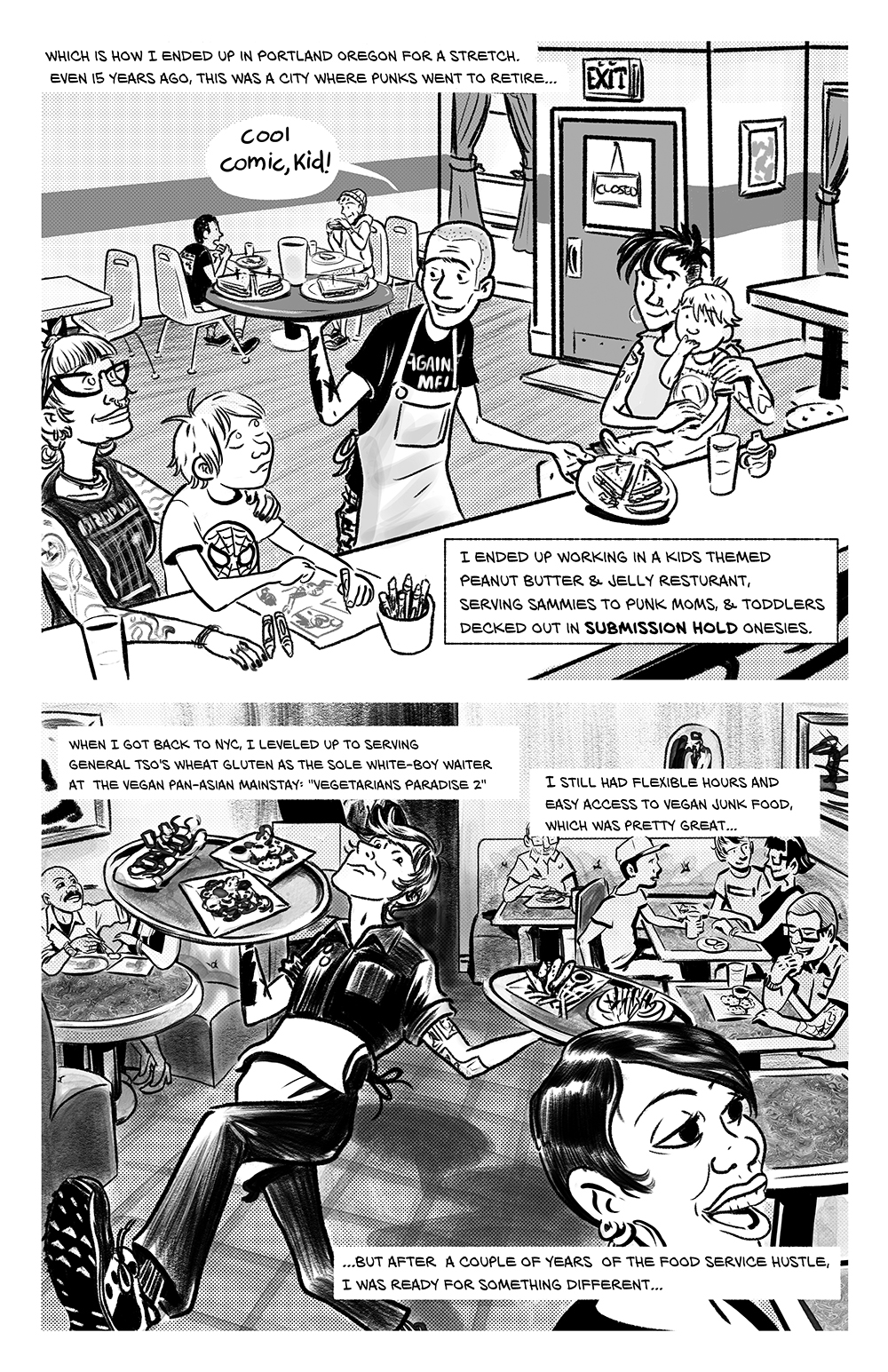 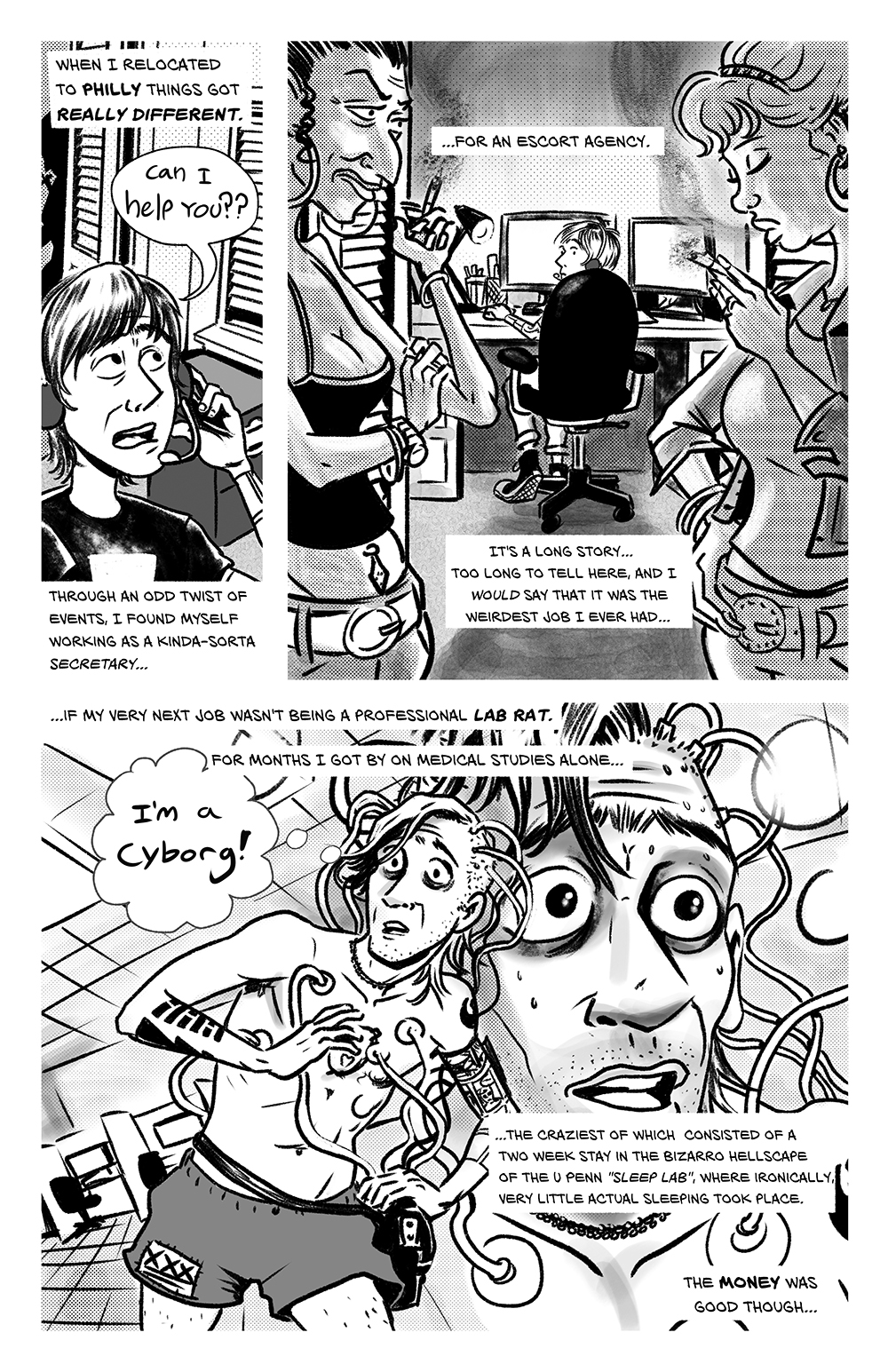 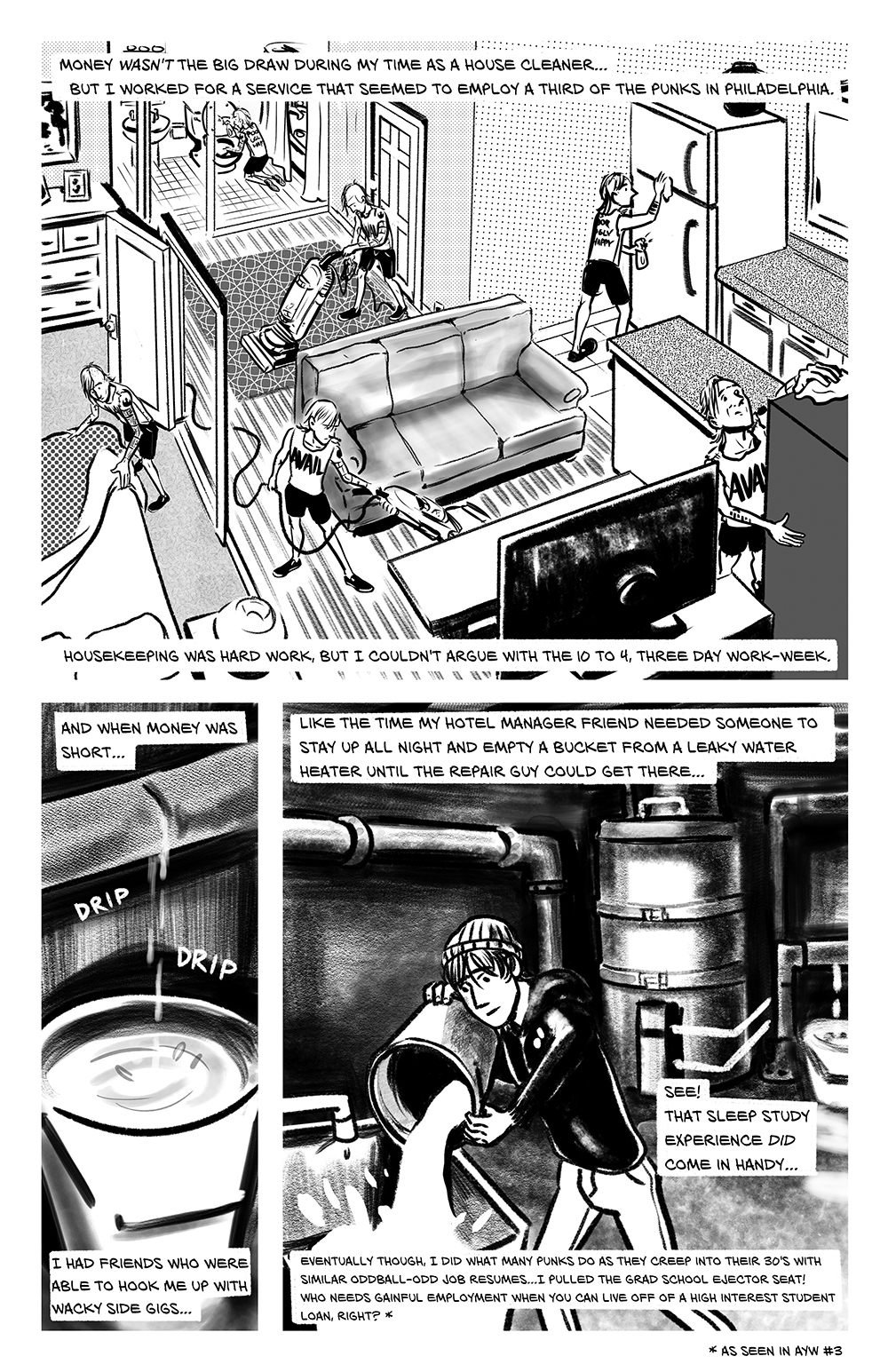 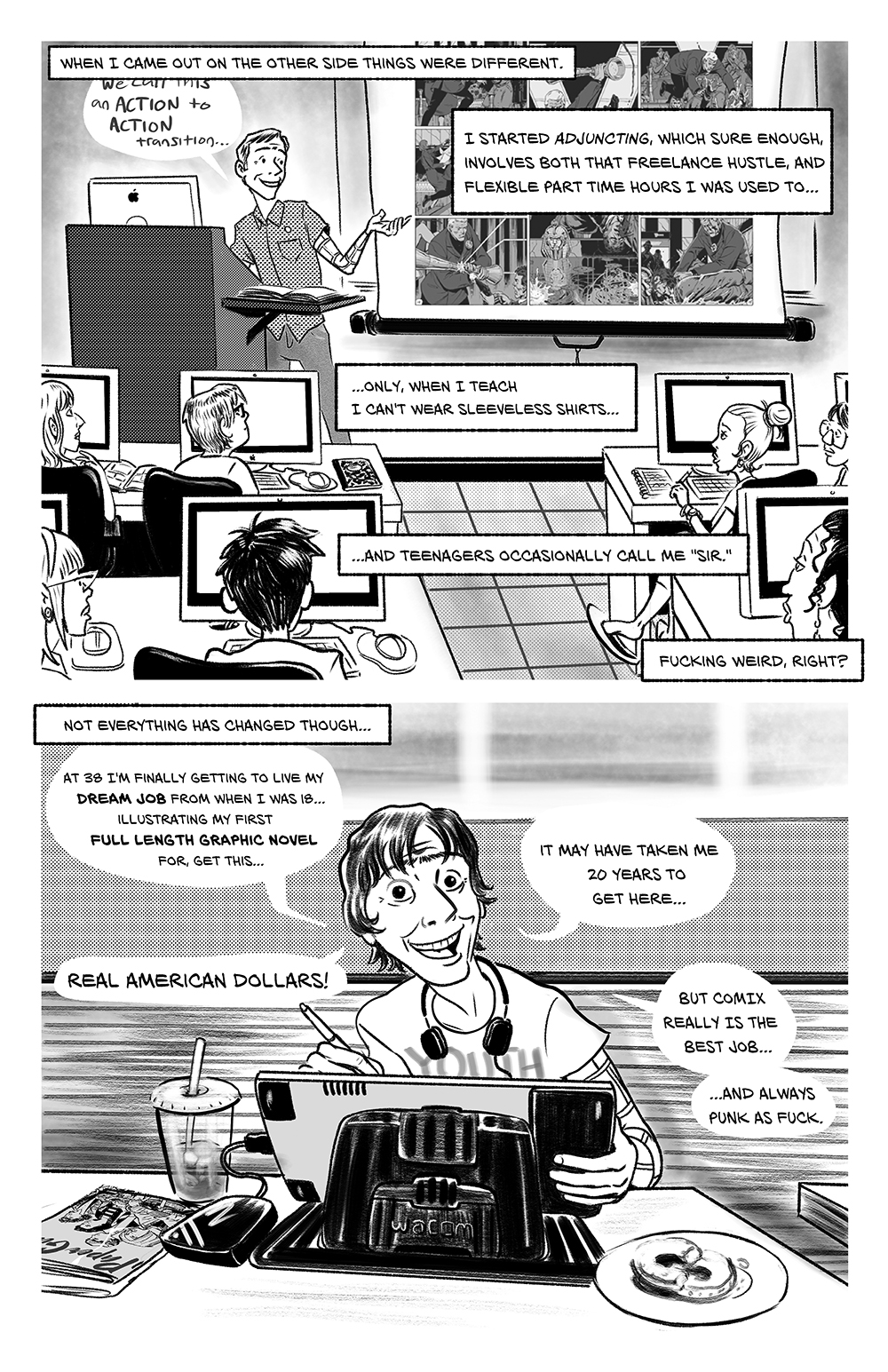 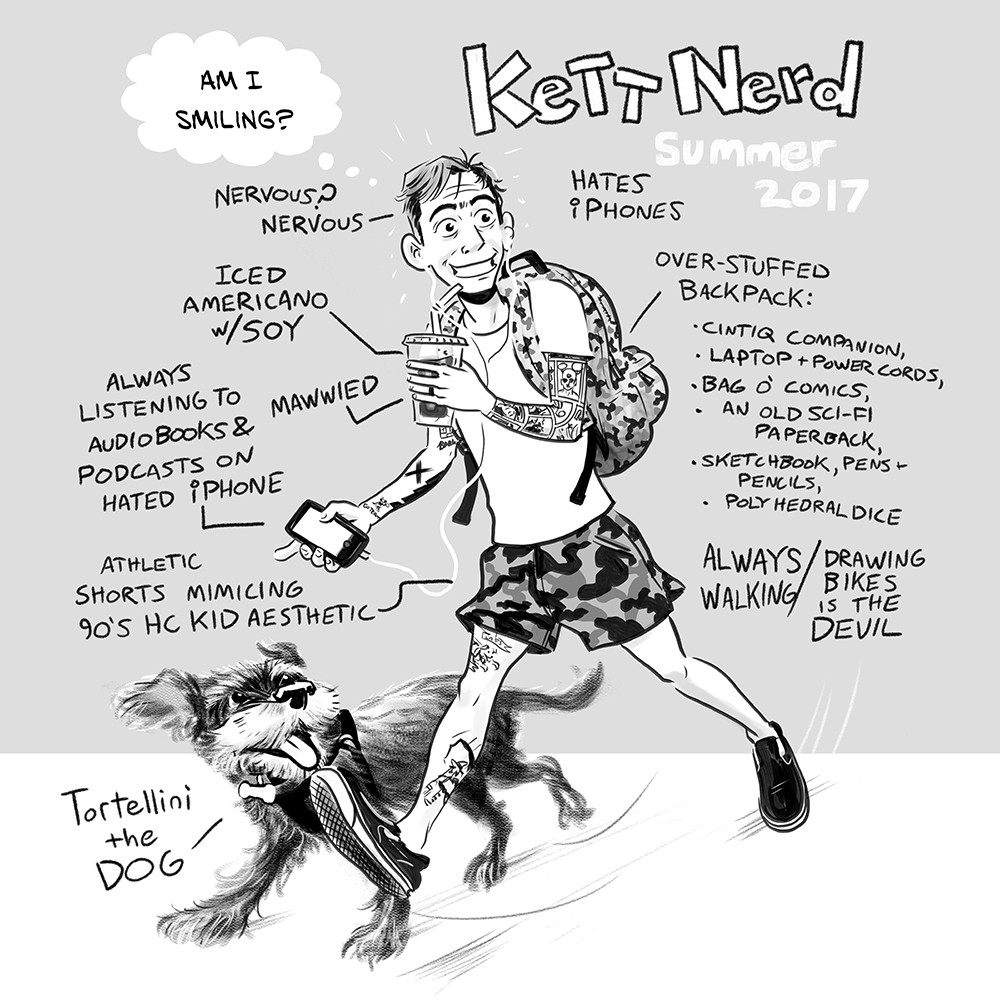 Interview with Jim Kettner by Natalye Childress for Silver Sprocket

Can you tell us more about the process you went through in making your comic?

Ah, well as far as the resume format, I wish I could say there was an awesome story reason I took that approach, but really it was all about managing deadlines. The deadline for AYW last year hit right in the middle of my work on my upcoming graphic novel (a collaboration with my wife, Lacy), Ink In Water. It’s a big project, 270 pages, which is by far the biggest thing I’ve ever taken on. I initially didn’t even think I’d be able to be a part of AYW for this issue unless I figured out a way to cut corners and save time.

I had previously begun work on a longer comic about one of those jobs, the escort agency one, and I initially contacted Avi and Mitch about repurposing the first chapter of that story for AYW, but they quite accurately saw that a cliffhanger-y opening chapter of a story about a weird job isn’t what most anthology readers are looking for.

The truth is, I have some really weird stories from so many jobs, but a few of them just felt too big for an AYW story, and definitely too big for what I could tackle with my time constraints. I eventually landed on the resume, because I was like, OK, two panels per page…I could grind through that pretty fast, tease a couple of ideas I eventually want to get back to in longform projects, annnnnd hopefully have at least a little bit of an arc story-wise, in terms of showcasing the weird things punks do to make ends meet and eventually getting to do what you love and get paid for it.

As for jobs from the cutting room floor, there were a few other neat ones, but I didn’t think they made the cut as far as weirdness, or didn’t fit the arc I tried to construct of aspiring to make comics to making comics “professionally.” For years as a teenager I worked as a camp counselor and lifeguard at this really oddball private camp that could have made a good story. I worked at the Philadelphia Museum for a while, and quit on super short notice when out of town friends came to hang, ’cause when you’re in your 20s, hanging out definitely seems more important than a paycheck. I’ve had some other weird illustration gigs, but yeah, they just didn’t fit the narrative I was trying to tell.

Ah, it was definitely NOT apparent. There were so many intermittent periods when I thought it would never work out between me and comics. I had so many abandoned projects through my 20s, and so much questioning and doubt about what I was making, not being good enough, imposter syndrome, and all that. I had “quit comics” multiple times, which is wild, because at that point I had not actually released any of the work I was toiling away at. Even when I started putting out webcomics on If You Make It…like, that was cool and helped me get my sea legs, but I didn’t necessarily think it was going to lead to many paychecks.

It wasn’t really until grad school that I really focused and got super serious about the work and tackling bigger stories. Like, going back to school definitely isn’t necessary or a financial option for everyone. I’m very privileged to have been able to go back to school and just focus on the work I most wanted to make for a couple of years. That structure was very helpful to me, because I was surrounded by other people who also wanted to take the work more seriously.

It was there that I had my first teaching experiences too. I had an internship at Oakland School for the Arts and really started to figure out if I could manage the hustle between working on comics and working in the classroom. It can still be tricky financially, but it’s work that I really enjoy. I definitely had the weight of trying to make up for lost time, and after school I’ve really tried to continue having that level of focus.

Lacy and I had been developing Ink In Water while I was still in school, and we scored our book deal about a year after I graduated. Now that work has wrapped up on that (the book drops in October!), I really just want to keep up the momentum. I have other longer-form comics projects that I am really excited to get to, and having graduated from webcomics, to short stories, to a graphic novel, I have more confidence that I can make comics and people will actually want to read them.

Oh gosh, well I’ve got a few things brewing. After Ink In Water, Lacy and I really want to continue making comics together. We’re relaunching our podcast, Adult Crash, this month with an accompanying Patreon that will offer a webcomic/zine subscription. We were really inspired by Liz Prince’s Patreon comics project and wanted to work on something similar, giving Ink In Water readers a place to catch up with us and read new stories.

The patreon will also give us the space to develop some of those longer-form ideas. Some of the comics will be written by me, some by Lacy, and some will be a total collaboration. I’ll be doing the draws, but yeah…every month there will be about 10 pages of comics content. Some shorts, some serialized chunks of bigger stories that might become graphic novels in their own right. You’ll probably see more stuff centered around some of those weird jobs.

The plan now is to also put out a quarterly zine, compiling a few months’ worth of the webcomics with some other articles/record reviews/etc. It’s a big project, but we’re super stoked about it. Plus it’ll be fun to get back into podcasting and talking to new guests and stuff.

I’m also developing a fantasy detective comic that I hope to start releasing in 2018, kind of a Dungeons & Dragons/mystery noir mashup that has been in my brain for about a decade. Time to make that shit real!

Lacy and I will also be doing a bunch of promotional stuff for Ink In Water, which is its own kind of work, is very challenging, and is VERY different from the grind of making pages. Fingers X’d!

What is the value or purpose in making art? Are there any downsides?

Yeesh, that is TOUGH. As much as I’d like to think there is some big grand purpose to the hours at the drawing board, I really think it’s about personal gratification. I remember the speaker at my undergraduate commencement had this whole speech about how making art was selfish, and my young idealistic self really bristled at the idea, but the more I’ve lived making things, I really think she was onto something. Making work, making art, comics, whatever…it can be constructive. The stories do have value and can affect the way a reader thinks or feels, and I do think that is really special. As a reader, I think that feeling is special, and it is worthwhile to pursue that, but also…yeah, it just feels good to make things. It feels good to develop characters, to sit at the drawing board all day and then look back at the work, pin your pages on the wall, see your progress, and really see that you’re building something. It’s immensely gratifying. Same thing in the classroom. Working with students and helping them chase that feeling. Getting the ideas unstuck out of their brains and onto the pages just feels so rad.

There are totally downsides; there are totally times where it feels awful, like the thing you’re making isn’t actually going to work, you’ve got a cool idea but struggle with how to make it real. Cartoonist Jessica Abel calls this “the dark forest,” and it can be really shitty when you get stuck in that stage on a project for too long. Financially…I mean, nobody gets into comics for the money. But yeah, getting older, I’m managing to make a living, but it is not the most secure financial path, that’s for damn sure.

Well, everyone has a certain level of social responsibility, sure. Whether or not artists have an extra helping is certainly up for debate. I do think that if you’re going to do the intense labor of making comics, it makes for stronger work if there is a certain point of view. That point of view can help shed light on all sorts of ideas and personal and political ideologies. In fiction or in memoir, part of the strength of those mediums is putting yourself in the shoes of another character. Seeing through another person’s eyes for a few pages can be very illuminating as to different folks’ experiences. Now, I don’t think that every image or comic story needs to have an explicit social or political message, but I think that with the stronger work, that stuff gets filtered in.

I know that with Ink In Water, there are some really obvious ones right on the surface, because the book is about overcoming/living with an eating disorder, so the politics of that issue are right at the surface. But even in genre work, from fantasy novels to superheroes, I think creators who feel that pull toward social responsibility will, intentionally or not, have bits of it reflected in their work. Get Out is a great example of a terrific horror movie because of the point of view of the creator who is expertly pointing out race issues, and that adds an extra level of thoughtfulness to what is already just a damn good horror movie.

I guess what I’m saying is that you don’t have to set out to change the world just because you love to draw or paint or write. It can be tough enough to just tell a good story, create a good composition, nail a likeness in a portrait, whatever. But if you have a strong point of view, if you have a particular experience you can illustrate in your chosen medium, that’s going to make for stronger work…even if all you’re aiming for is to communicate a feeling.

Ink In Water! On bookshelves October 1!

For more from Jim Kettner, check out his website, Instagram and podcast, or preorder Ink In Water here.