The sixth annual Black and Brown Comic Art Festival (BCAF) was this past MLK weekend in San Francisco, and if you didn’t attend, you missed out! That’s okay though, because I’m here to tell you all about the festival and showcase some of the artists. 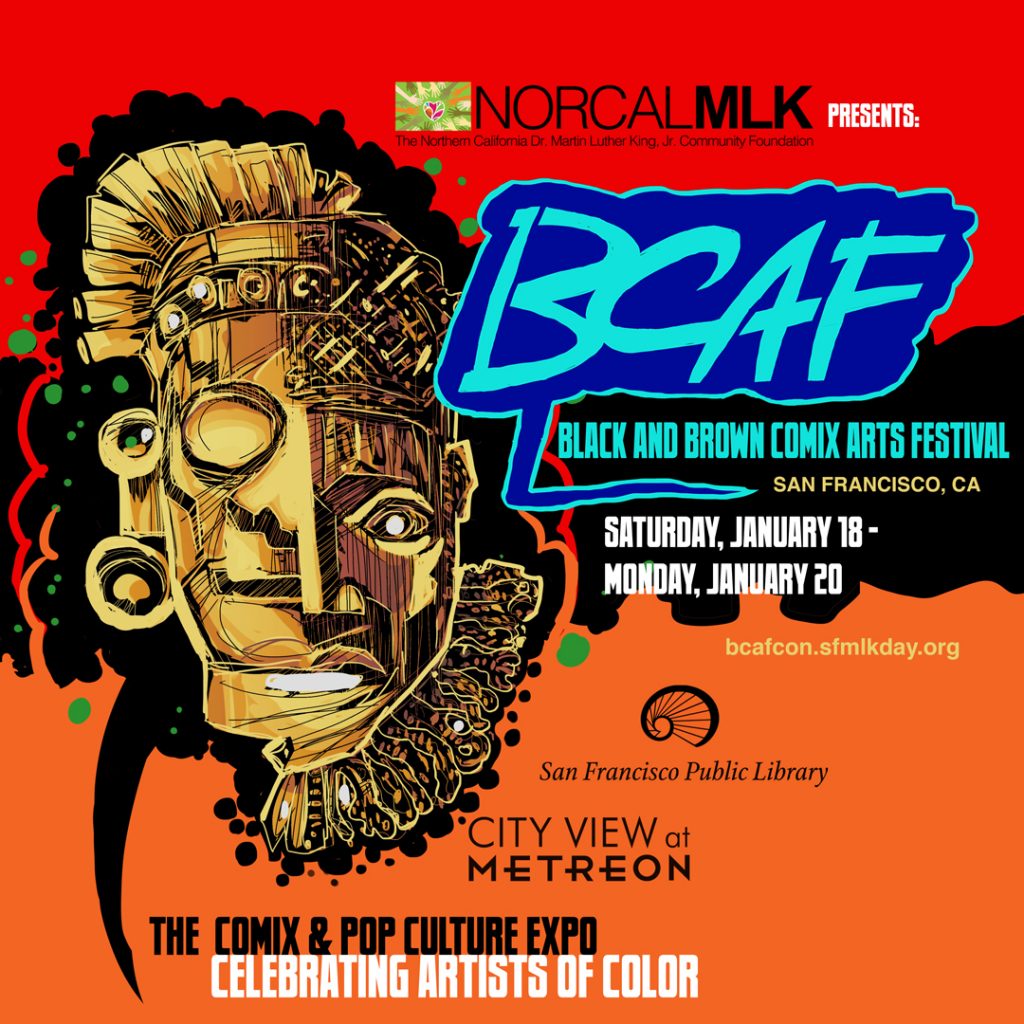 What makes this convention-style festival stand apart from similar events is that the participants are exclusively Black and Brown artists who travel from all across the country to participate.

BCAF hosts a Youth Day on Saturday, followed by a series of panel discussions on Sunday at the SF Main Public Library. Then on MLK Monday, the library is closed, so the festival takes over City View in the Metreon on 4th and Mission.

The final day of the festival is host to workshops, as well as a convention floor full of comics, art, and apparel.

This year had hands-on artist workshops with Ezra Clayton Daniels, John Jennings, David Walker, and Ytasha Womack, running the gamut from Character Design to Worldbuilding, a writer’s workshop, and a dance therapy session! 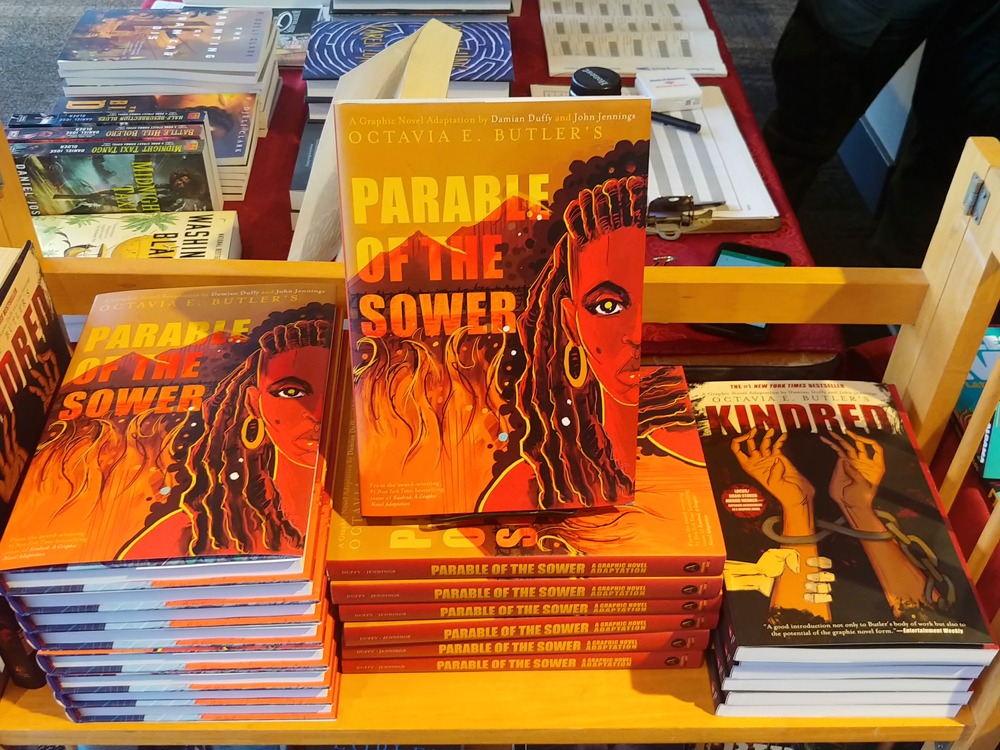 Let’s start with a new release — John Jennings’s newest graphic novel adaptation of Octavia Butler’s novel Parable of the Sower. The book release was celebrated at the Black Comic Book Festival, BCAF’s sister convention which takes place on the same weekend at the Schomburg Center in Harlem.

John flew all the way from New York to SF to attend both the release event and BCAF; if that isn’t a testament to the hard work and sacrifice that goes into making BCAF happen, I don’t know what is!

Next up is Dark Star Universe, a project based in Oakland that takes Star Wars toys and paraphernalia and redesigns them with an Afrocentric, straight out of Wakanda style! 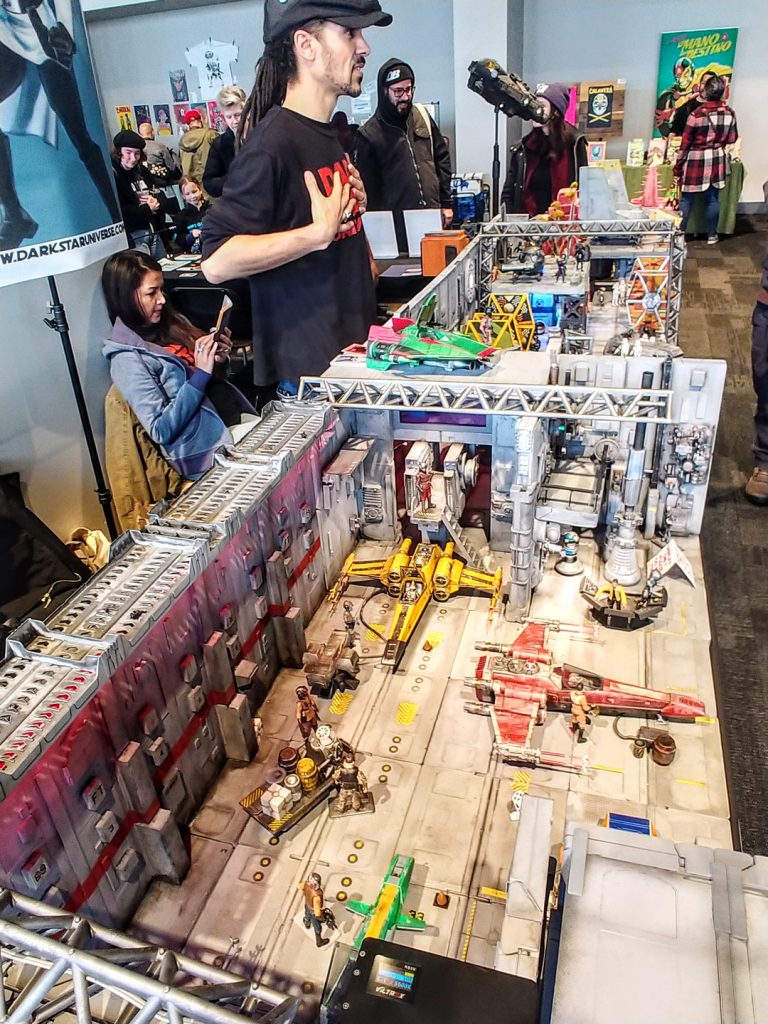 Pictured is Korise Jubert, local filmmaker and musician who spearheads the Dark Star Universe project.  I first saw the Dark Star Universe installation at Life is Living Festival in Oakland in 2017. I’m thrilled to see how much it’s grown since then! I know as a young nerdy Black kid I would have loved to see this project, and honestly, I should have taken at least a dozen more shots of the dioramas because they are truly mindblowing… 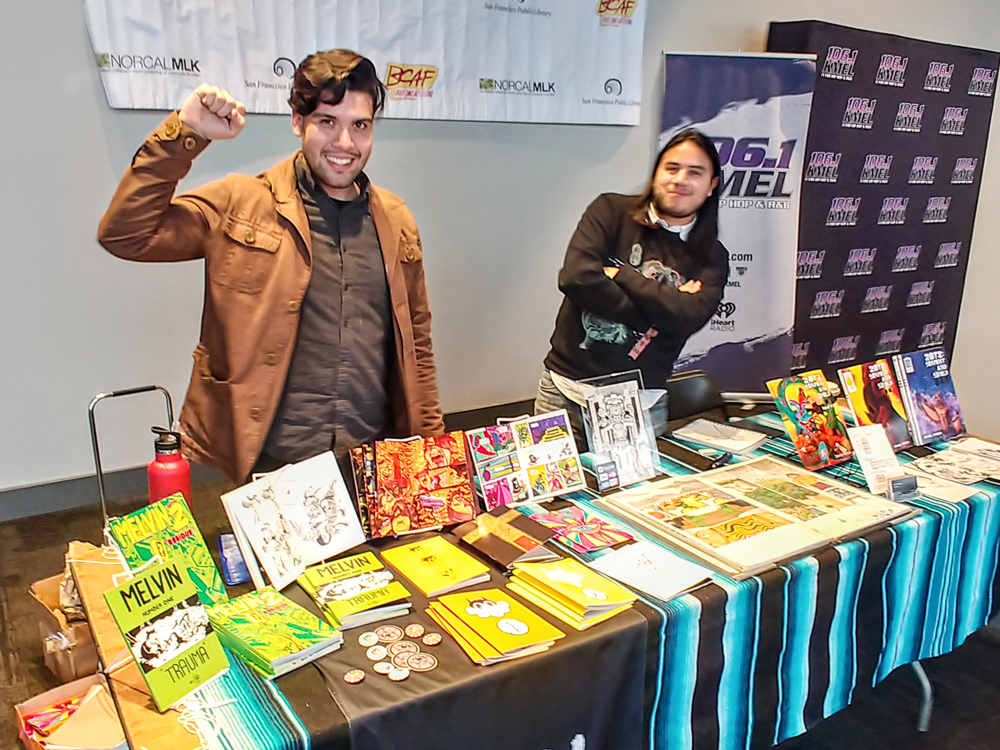 Pictured here are table-mates Dus T’ (left) and Daniel Parada (right). Dus T’ is based in LA and creates comics and zines inspired by early animation, the underground comix scene of 1960s SF, and psychedelia.  He has quite literally one of the fastest drawing hands in the West!

Daniel Parada is based in the Mission and working on a visionary graphic novel series titled ZOTS: Serpent and Shield. ZOTS tells “an alternate history (…) set in the late sixteenth century Mesoamerica, in a world where the Spanish conquest fails and two new indigenous empires emerge and wage war on each other; a successor to the Aztec Triple Alliance on one side and a new K’iche Maya empire on the other.”(1) Pretty exciting stuff, if you ask me! 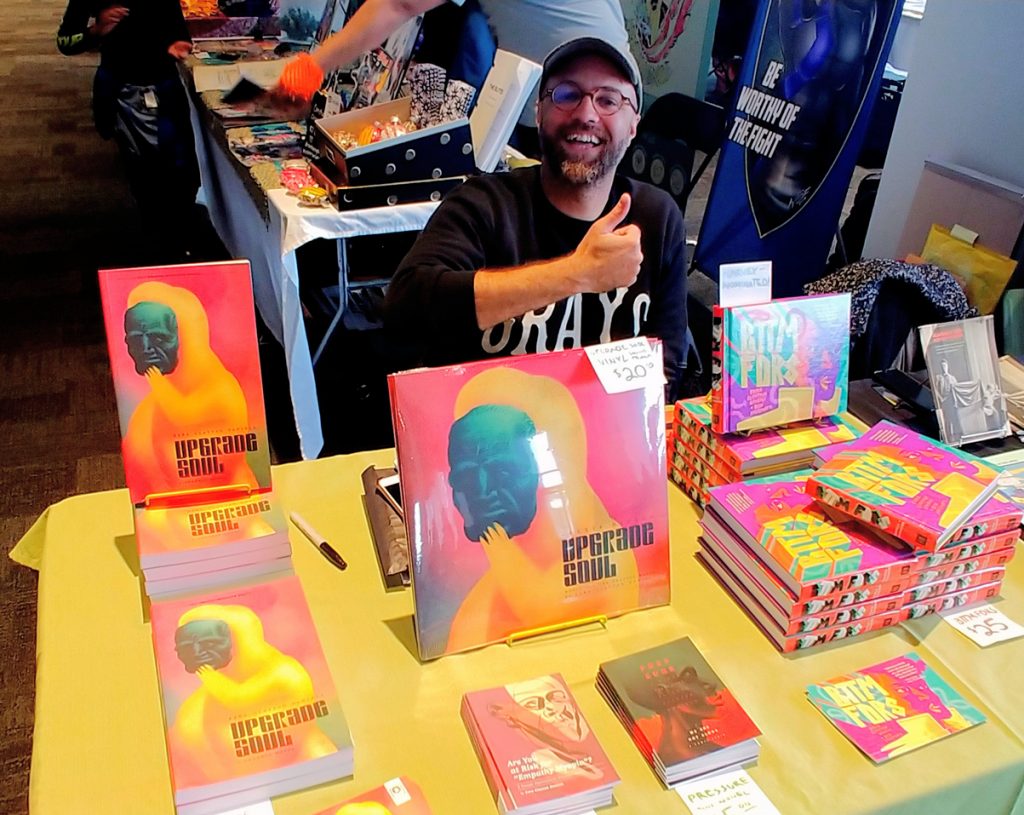 Ezra Clayton Daniels, author and artist behind Upgrade Soul, and writer of Bottom Feeders (art by Silver Sprocket published artist Ben Passmore). We sell both of these books on our website so if you haven’t read them yet, pick em up here!

Ezra was featured on a panel on Sunday, From Comics to the Screen, because both books have been optioned for the screen, which is incredibly awesome. He also led a workshop on his artistic process which I had to miss because I was tabling for the CCA MFA in Comics Program, which you should totally check out if you are even remotely interested in getting into the wild world of making comics! 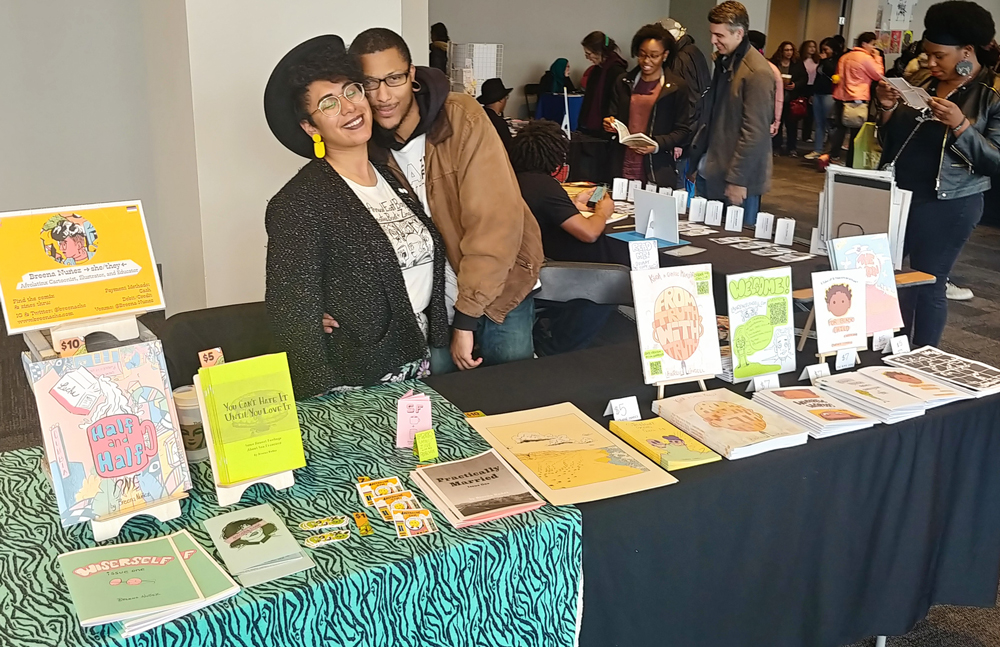 Speaking of MFA in Comics… here we have the power couple of the Bay Area comics community. Breena Nuñez (left) and Lawrence Lindell (right) are good friends of mine, and I’m super stoked to share their work with you!  Breena was on two panels on Sunday, one on Latinx Superheroes in mainstream comics, and one on Women of Color in Comics.

Breena’s work focuses on their experience as an AfroLatinx person of Guatemalan and Salvadoran descent.  She is working on a long format piece called Morena which I can’t wait to read.  A graduate of the MFA in Comics program, Breena is an up and coming comics professor as well!

Lawrence creates comics and zines centering the experience of Black people, especially those around mental health, bisexuality and queerness, nerd culture, and more!  He also happens to be my classmate, and one of my favorite people. His newest book, From Truth With Truth, was just released and you can pick it up direct from Lawrence, and in our shop once we get them in stock. 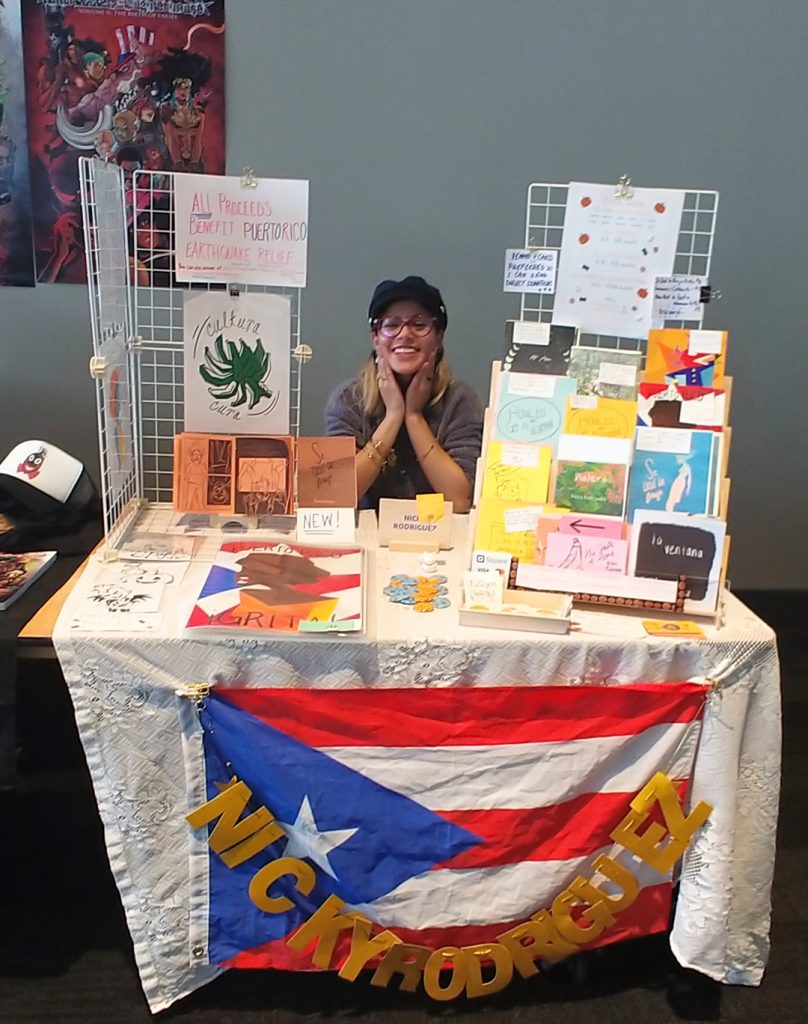 Nicky Rodriguez is another graduate of the MFA in Comics program whose work I adore!  We stock her zines on the Silver Sprocket website, check em out here.  Her humor is authentic, and her drawings have a unique style that is immediately recognizable.  She also happens to be an amazing human being who is donating all the proceeds of her zine /comic/print sales to the relief effort in Puerto Rico.  Peep that Boricua pride, and keep up the awesome work Nicky! Check out her website for a sick digital comic and updates on her comic project, Second Sun. 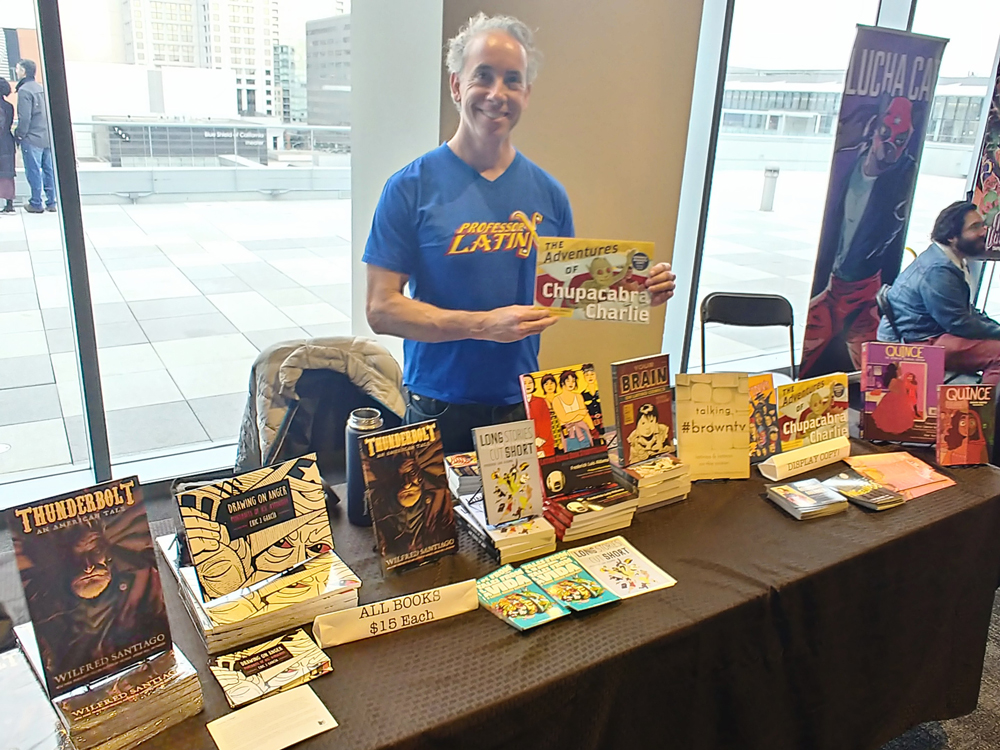 Frederick Luis Aldama is a professor at The Ohio State University, where he teaches Latino literature and comic book studies.  His table featured advance readers copies of Chupacabra Charlie, a children’s book to be released in July 2020. His film, Latinx Superheroes in Mainstream Comics, was screened with a discussion afterwards at the Sunday panel.  His contributions to the field of Latinx cultural studies, specifically comics studies, cannot be understated, so if you’re interested in learning more about what he does, check out his Wikipedia page (cos he’s that legit!) 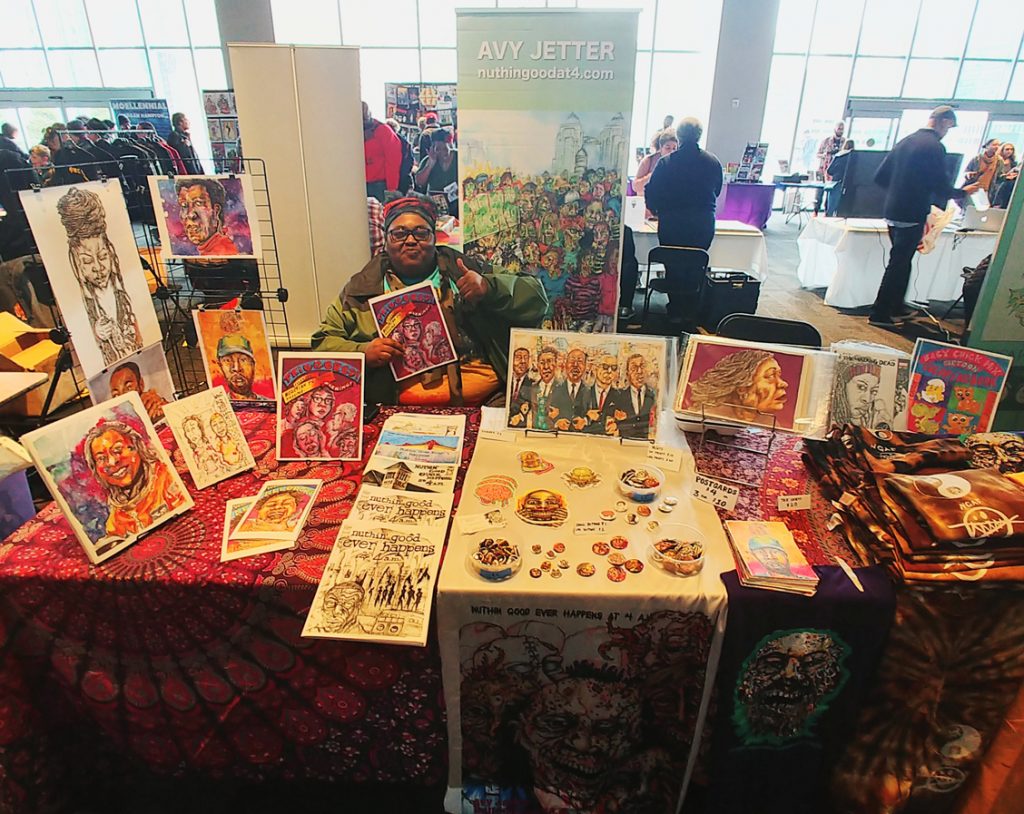 Avy Jetter is a powerhouse in the Oakland comics community.  Avy is the founder of Oakland Creates, an artist and zine fair that showcases local talent.  Avy is also responsible for Nuthin Good Ever Happens at 4 AM, a comic about a zombie outbreak in Oakland, and a number of other zines as well.  If that wasn’t enough, she’s also a kick ass textile artist, and draws a killer portrait to boot!  She was featured on the Women of Color in Comics panel, and I had to use the fisheye lens just to capture all the goodies on Avy’s table. 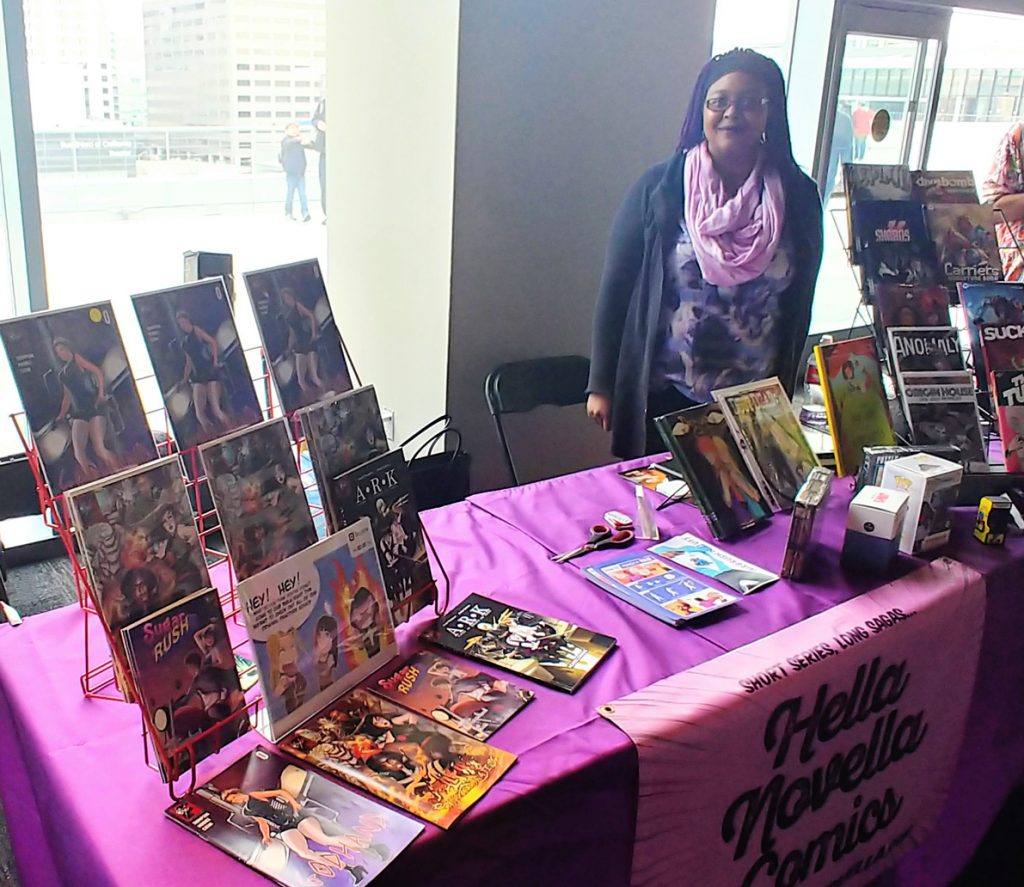 Saving the best for last, it’s time to give a shout out to our soon-to-be neighbor in the Mission, and official smallest comic shop in the world, Hella Novella Comics!  The brainchild of Sketch Smith (pictured here), Hella Novella seeks to center comics by women/artists of color, and focuses on independent and self-published work.  Sketch is publishing her own comic, a Western slice of life piece featuring a Black woman protagonist, it’s called Dust Dead: The Ballad of Sydney Graves.  Sketch was also featured on the Women of Color comics panel.  Can’t wait to do some shop team up events in the future… Keep an eye out for Silver Sprocket x Hella Novella collabs!

BCAF is a truly one-of-a-kind comics festival.  If you can make it next year, I can’t recommend it enough!  Even more importantly, if you want to get involved in BCAF you can reach out to the organizers through their website, here.

Gaia from the Silver Sprocket Crew 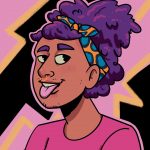