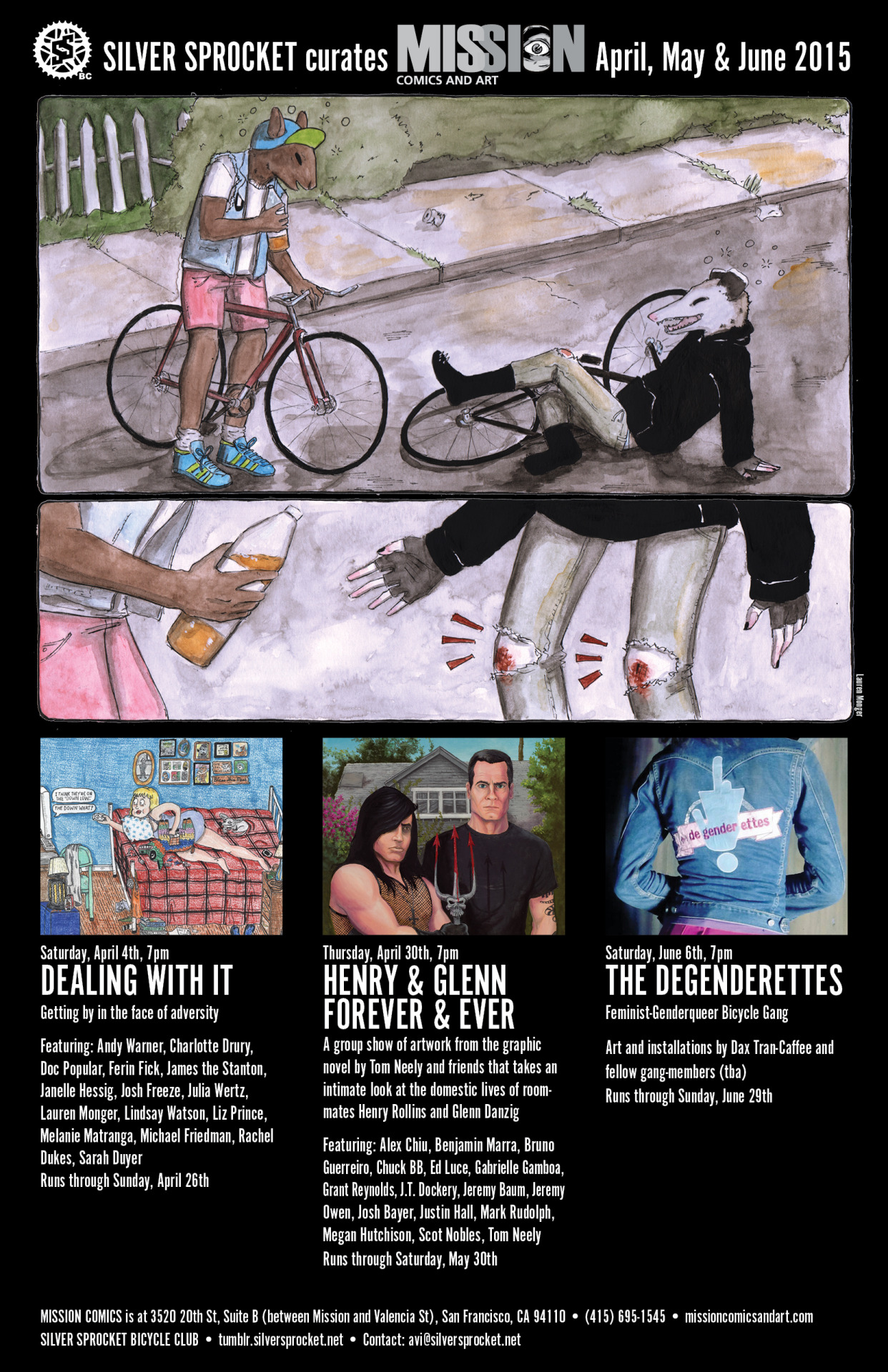 The Silver Sprocket Bicycle Club, a San Francisco based record label and art crew, will be curating three art shows from April to June, 2015, at Mission Comics and Art, a few blocks from the club’s basement headquarters on Valencia Street.

Mission Comics and Silver Sprocket have history. “They’re one of my favorite comic shops, with a fierce dedication to small press and independent publishers,” said Silver Sprocket founder Avi Cado. “They’ve been carrying our books, displaying work by our artists, and even hosting the occasional record release party since we moved to the neighborhood five years ago.”

Silver Sprocket has had a visual focus from the very start. ”We’ve been interested in not just the music of this diy-posi-anarcho-queer-punk community, but the art and culture as well,” continues Avi. “We are ecstatic to be curating the gallery at Mission Comics with three shows that we hope you will find as exciting as we do with some of our favorite artists from the San Francisco bay area and across the country.”

The first show, entitled Dealing With It, is a collection of personal successes in overcoming (or merely coping with) adversity, showing how we get by in the face of life’s debilitating challenges. Notable participants include Julia Wertz (known for her autobiographical Fart Party comic taking place in San Francisco), Janelle Hessig (of the Tales Of Blarg fan-zine and local publisher Gimme Action), and James the Stanton of Gnartoons, along with locals Andy Warner (Irene Comics), Charlotte Drury, Dax Tran-Caffee, Doc Popular, Ferin Fick, Josh Freeze, Melanie Matranga, Michael Friedman, Nomi Kane and Sarah Duyer. From further away, we are pleased to also be featuring works from Liz Prince (Ignatz award winner for “Will You Still Love Me If I Wet The Bed?”), Lauren Monger (Clementine Comix), Lindsay Watson, and Rachel Dukes (Frankie, Mixtape Comix).

Silver Sprocket’s curation will continue with Henry & Glenn Forever & Ever in May (opening April 30th, 7pm), a group show of artwork from the graphic novel by Tom Neely and friends that takes an intimate look at the domestic lives of roommates Henry Rollins and Glenn Danzig.

The series concludes with The Degenderettes in June (opening June 6th, 7pm) with a middle finger to the gender binary from San Francisco’s fiercest Feminist-Genderqueer Bicycle Gang

How we get by in the face of adversity

Runs through Saturday, May 30th