“Why Don’t U Smile More?” by Krystal Downs

Previous Next
“Why Don’t U Smile More?” by Krystal Downs

Today’s comic, “Why Don’t U Smile More?” by Krystal Downs, is about harassment from a boss. 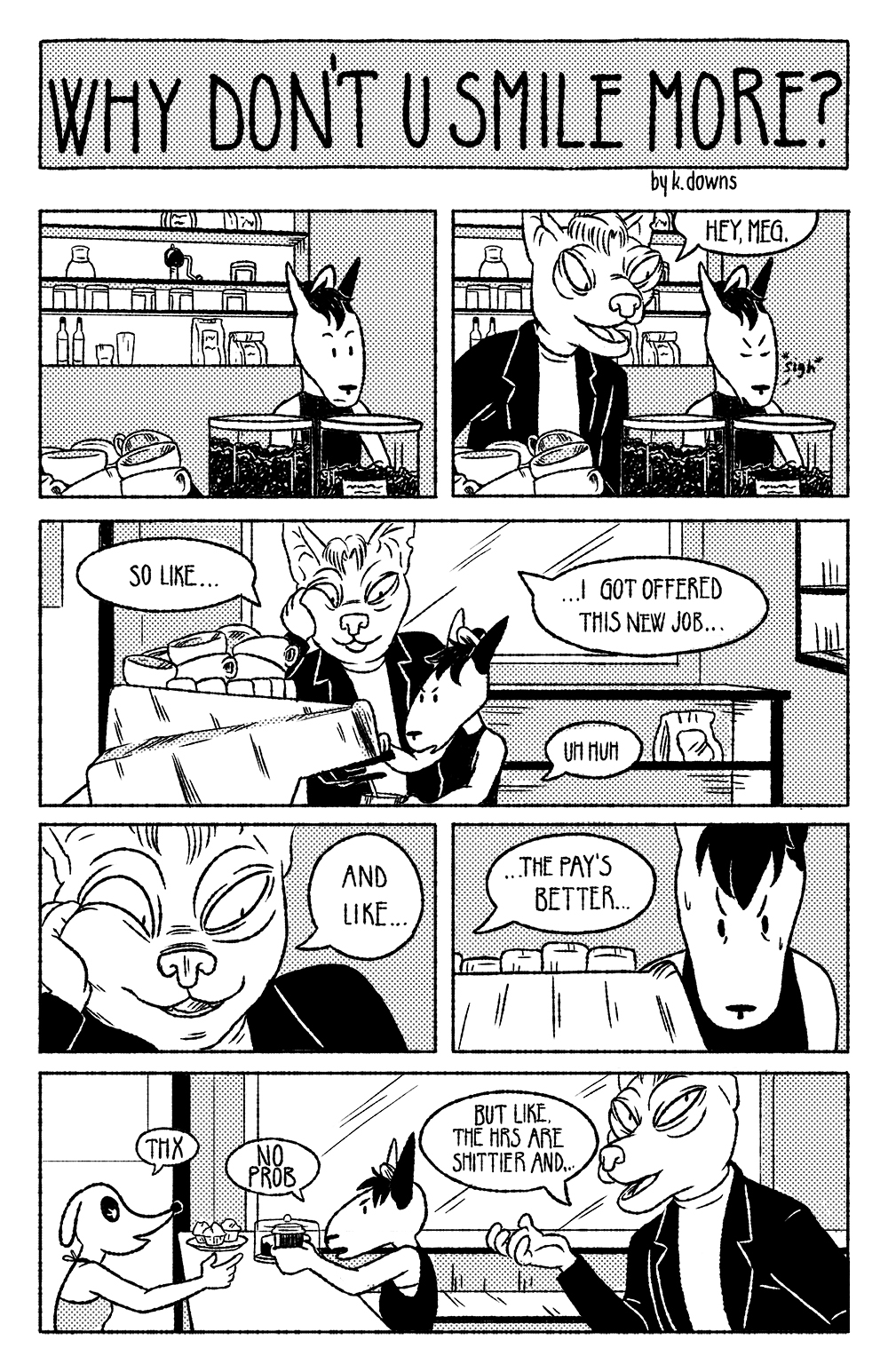 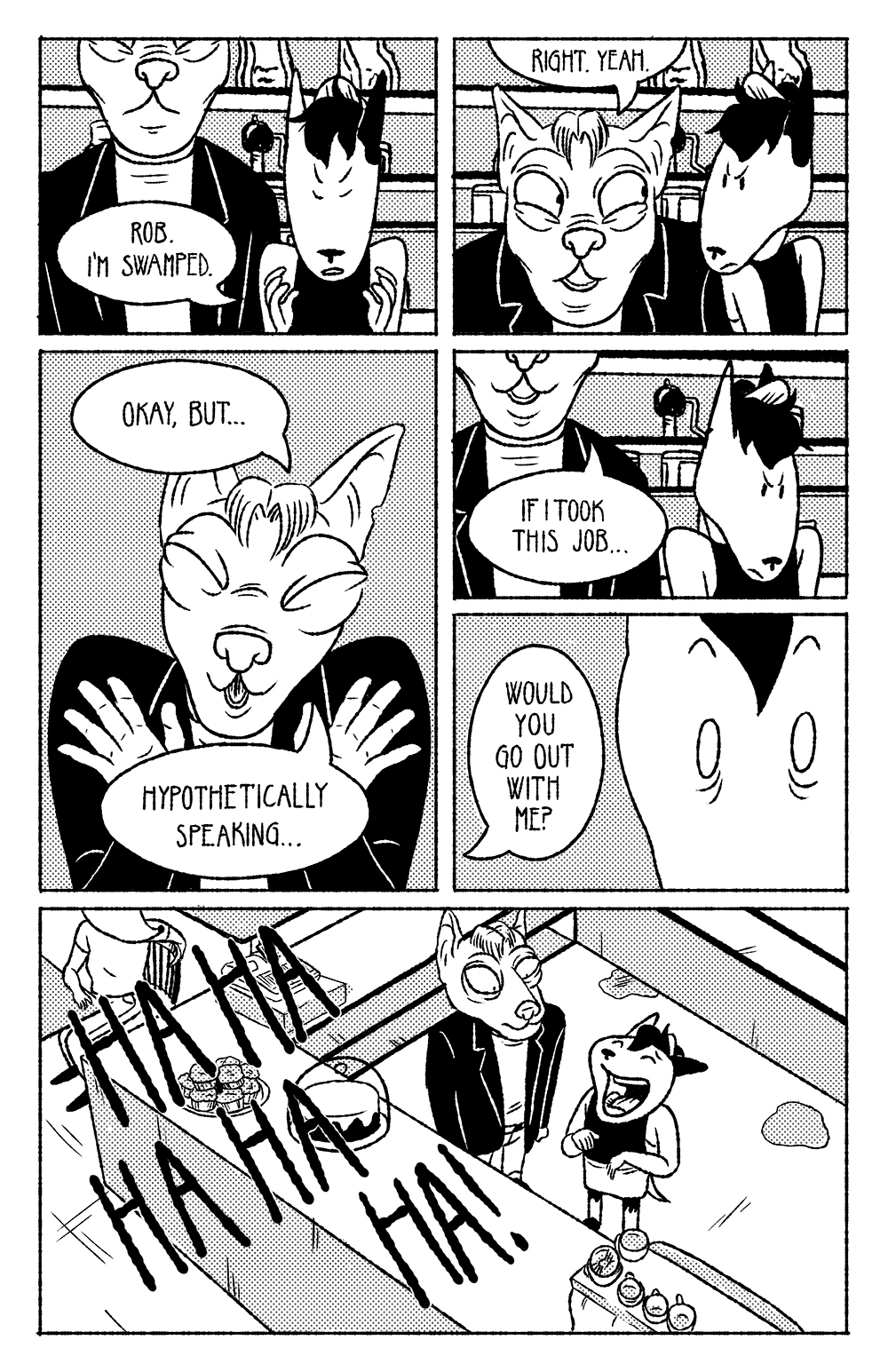 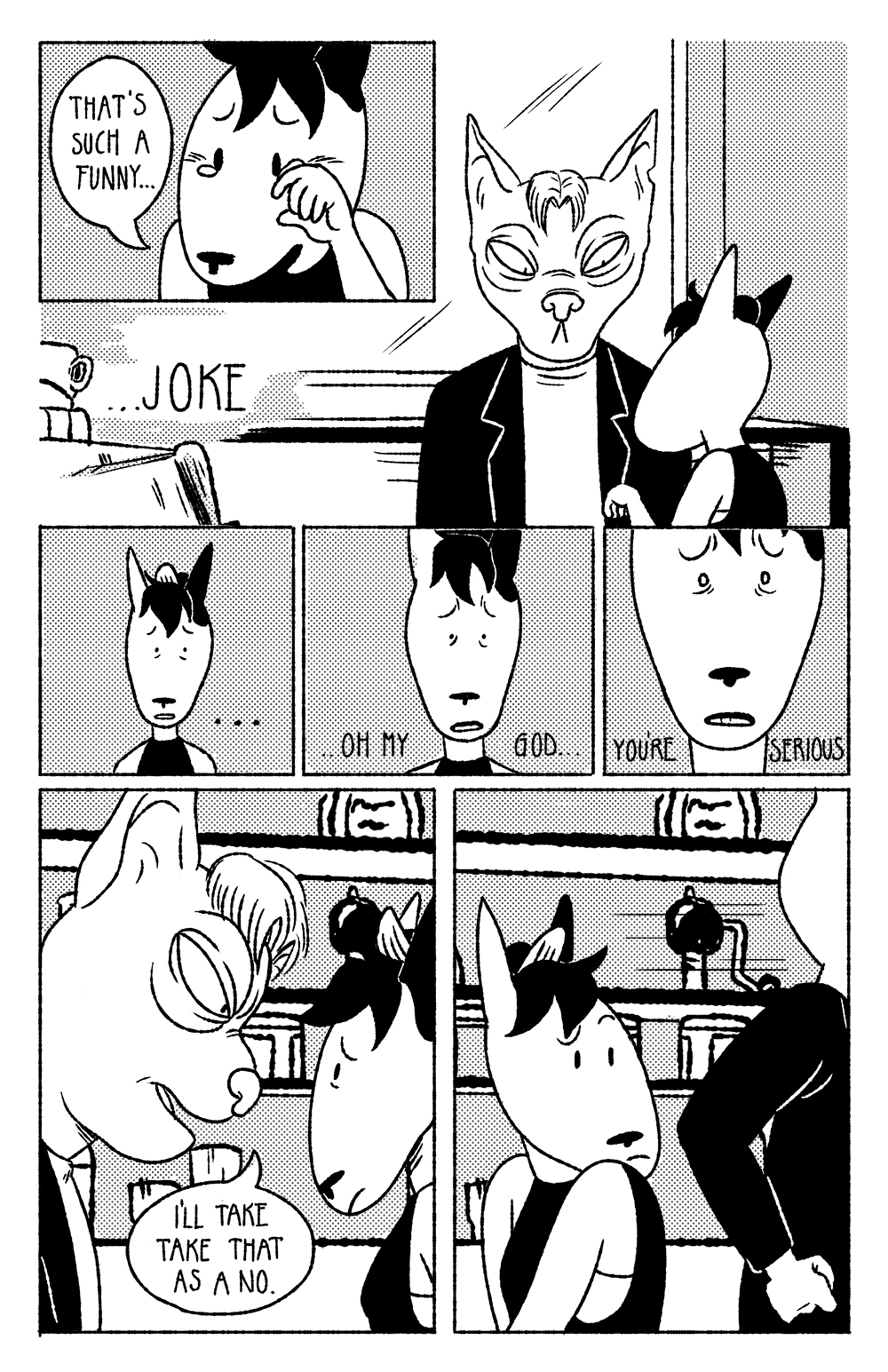 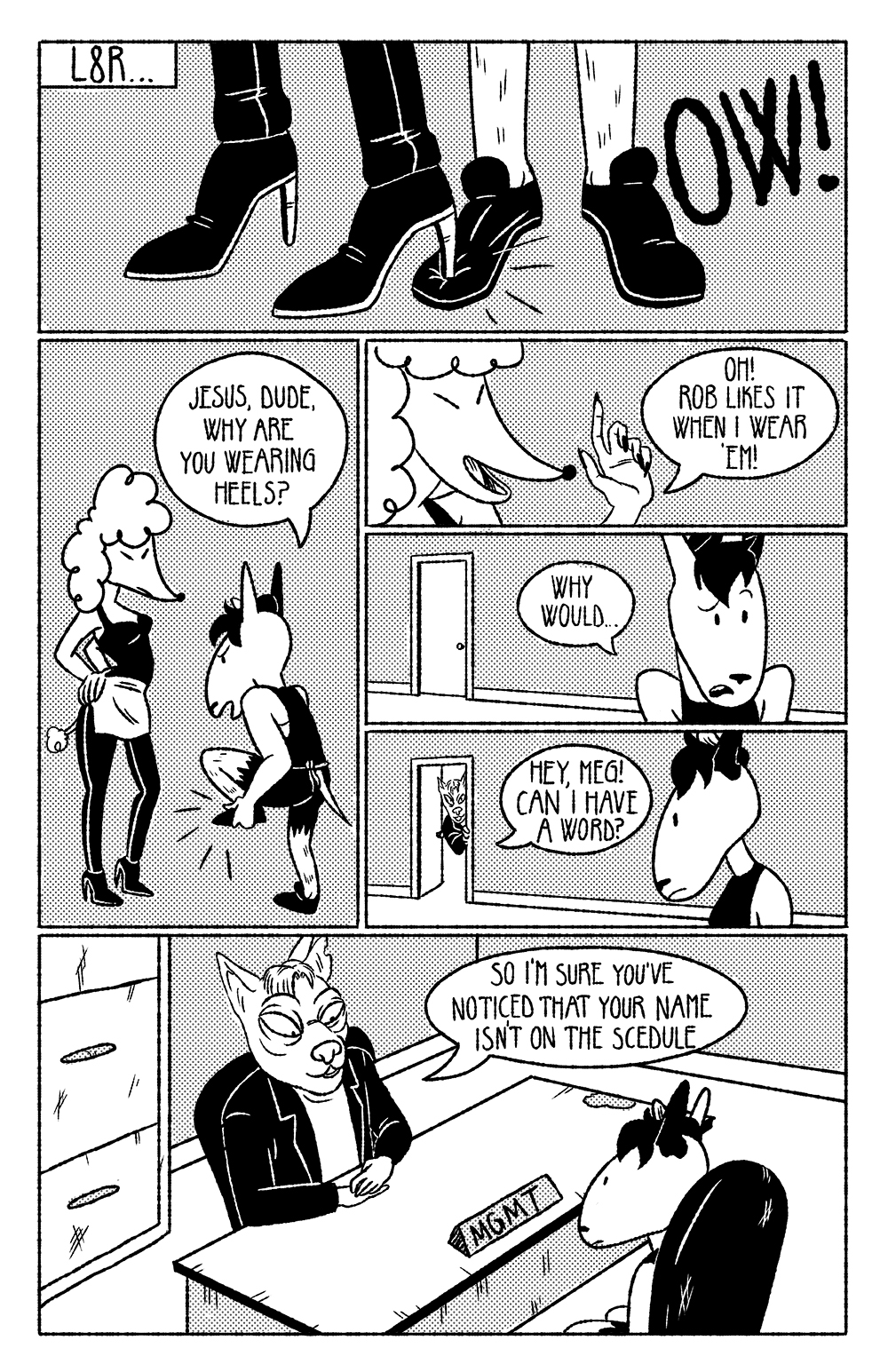 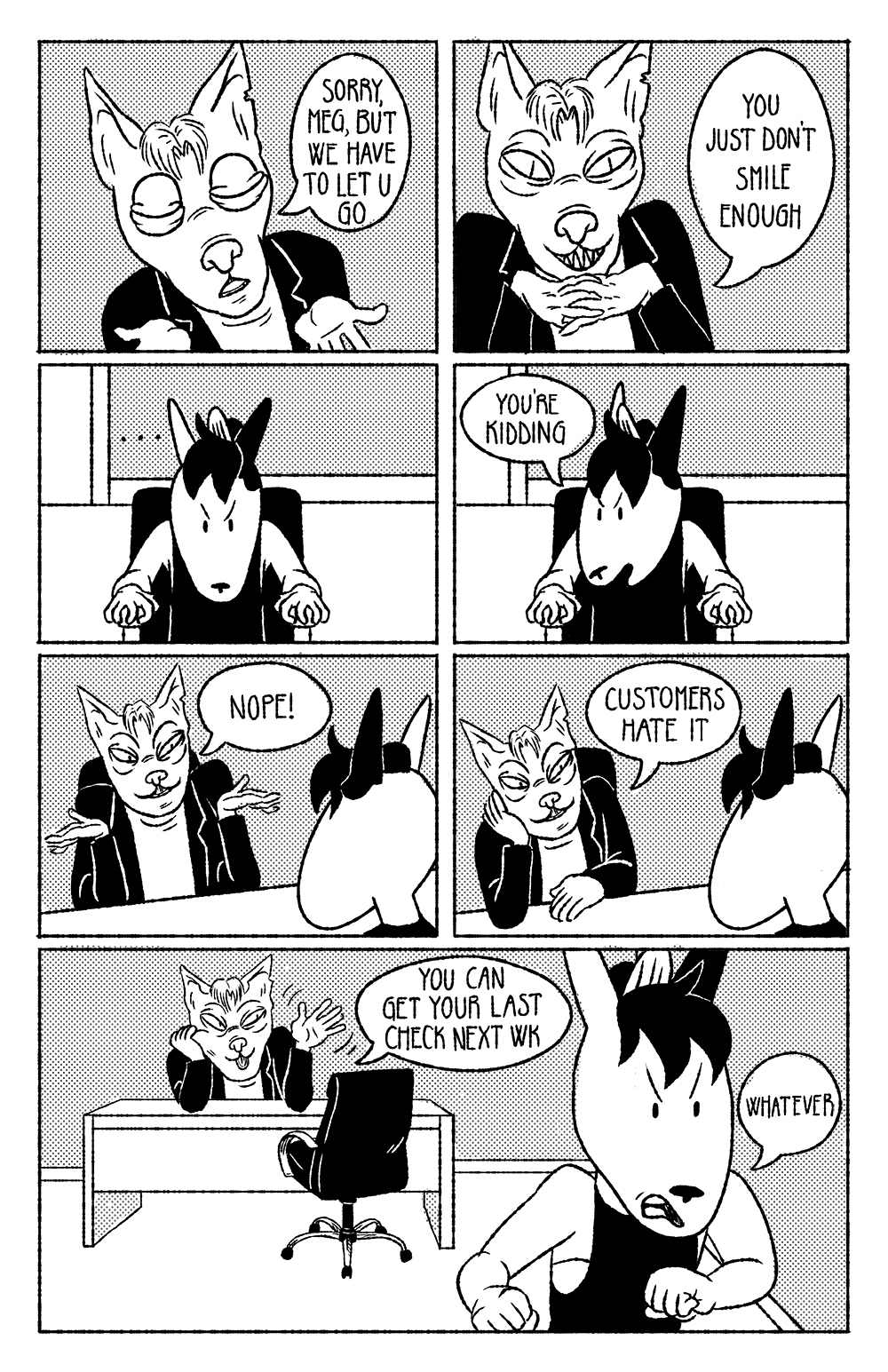 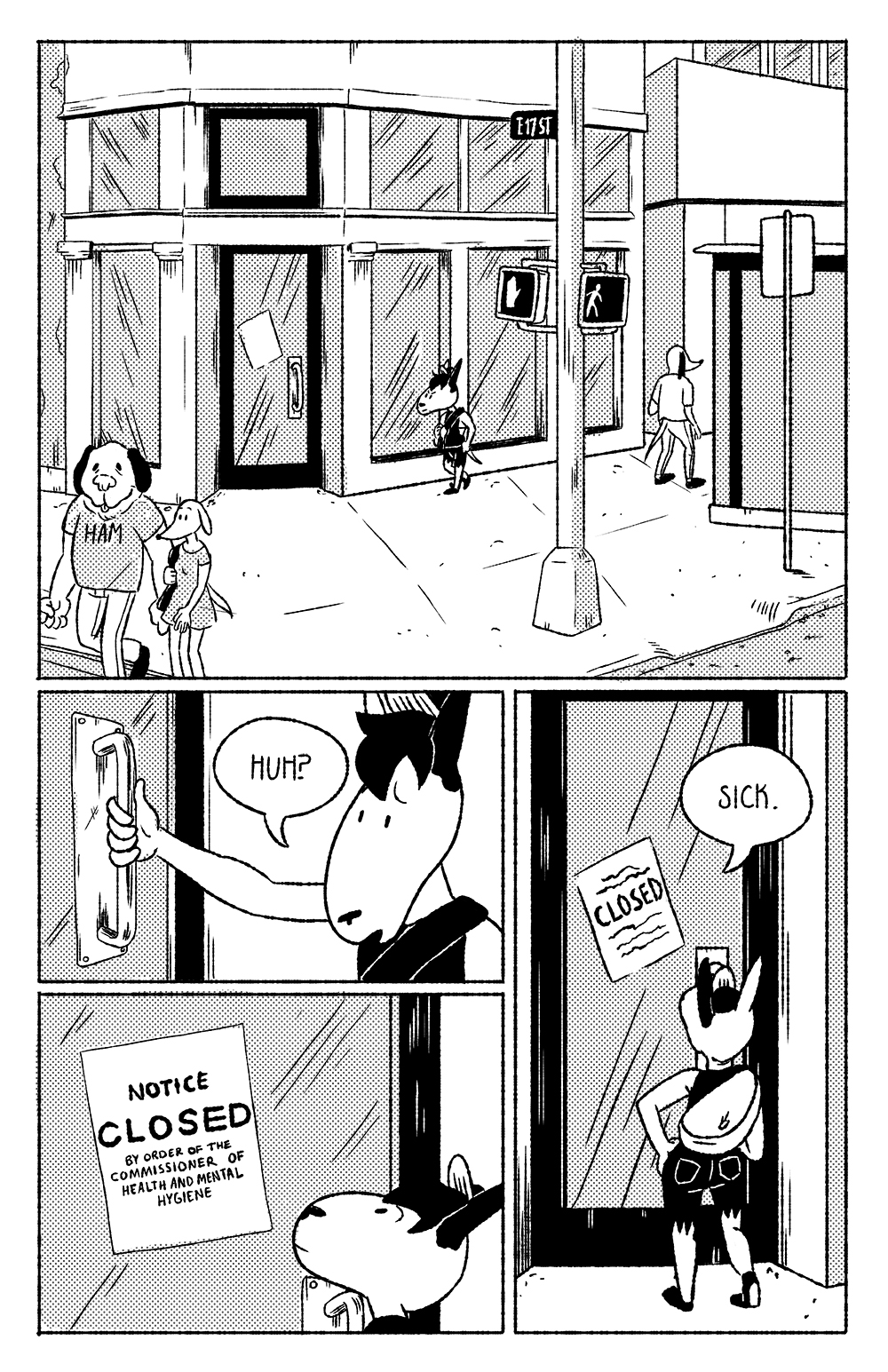 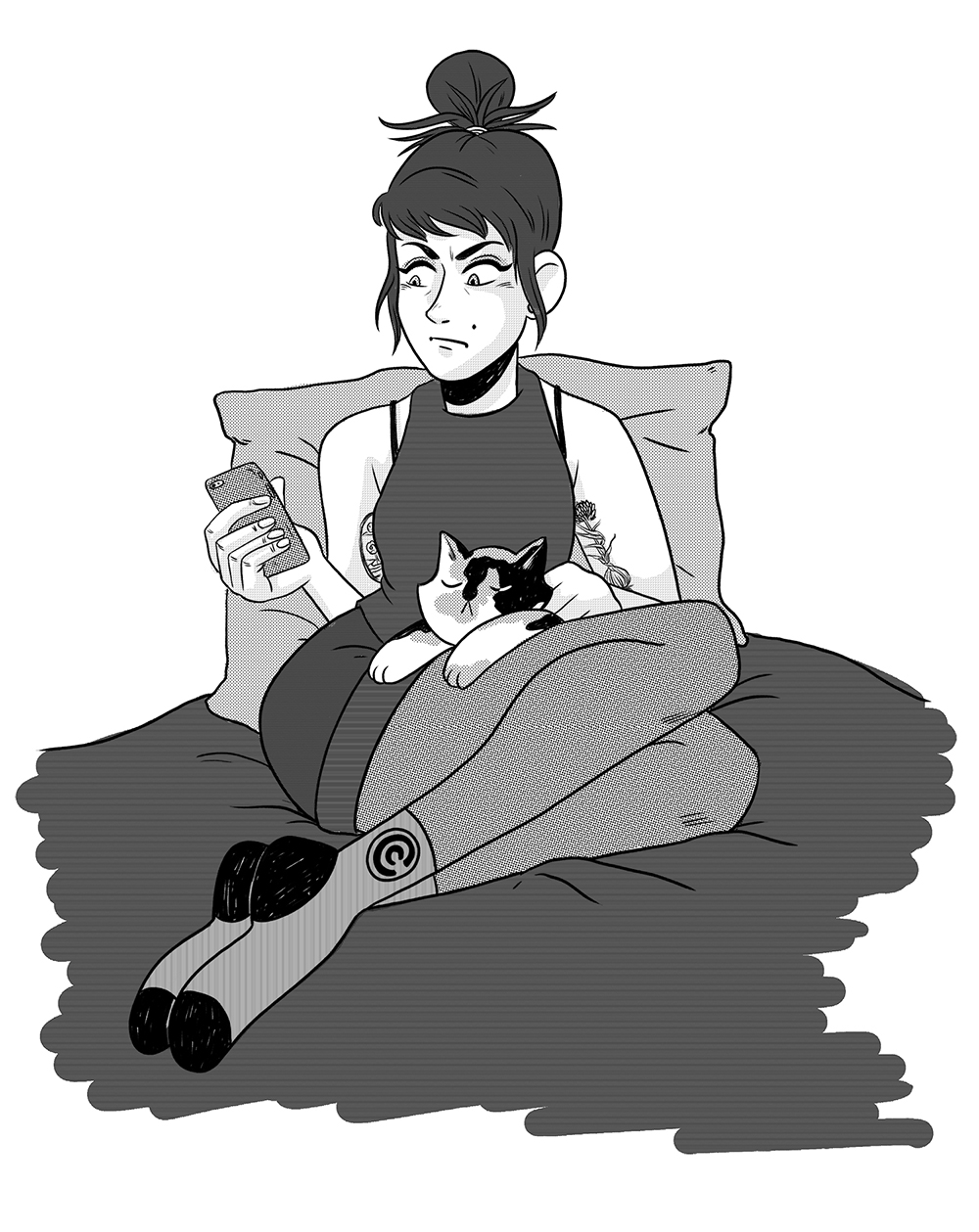 Interview with Krystal Downs by Natalye Childress for Silver Sprocket

It was a restaurant with a coffee bar. Of all the shitty jobs I’ve worked, this was the first time where someone who was truly awful got their comeuppance, so I wanted to share that one. It’s fucked up that people get sexually harassed at their jobs with little to nothing coming of it except for having to quit or getting fired themselves, so this guy’s cafe getting closed down a week after firing me felt real good.

[This job] was my first job after moving to NYC. I just walked in with a resume, did a quick test at the espresso machine, and got hired right on the spot. Other than a paycheck and a cooked meal per shift, there wasn’t much positive about it. It was located in Union Square, so I was always slammed, with little help since I was the only barista. It didn’t help that my boss never offered any assistance and just stood around and tried to chat me up around those times too. Just needed that green, doggo.

Were there any other jobs you’ve had that you considered sharing instead?

I did work one job at a juice bar where I had to work my shift despite having the flu. I puked in front of my boss, and the only thing she told me was “to get it together.” There was so much material for a comic for that job, but the cafe one was just more concise.

I think for nostalgia’s sake, my best job was animating on a music video for The Offspring, ha. But my dream job is to direct my own animated things like shorts, music videos, series, etc. I’ve been working in animation long enough to get consistent work, which is great, but after a certain point, it gets tiring to work on other people’s projects and commissions. Making a living off of people letting me do what I like sounds really rad.

Aw geez, I never know how to answer this question, ha. I just really love cartoons and I love making cartoons! Despite how stressful it can be, I can’t really imagine myself doing anything else. World building, character creating, and watching my drawings move is something I just can’t get bored of.

Two downsides though: First, the animation industry’s morals can get pretty dicey, especially in the commercial sector. Dicey can range from working on a commercial for a fucked company or working on a show with gross jokes. If you try to speak up, it’s so easy to get replaced by someone who either doesn’t care or likes that kind of humor. Second, my own self doubt in my abilities, but that’s not a unique problem.

I do, especially if you work in commercially viable art (like animation, mainstream comics, etc.) or if you have a large follower base. If you have a platform to raise voices of the marginalized and not perpetuate the same oppressive shit, it’s so important to follow through on that.

I work for a small animation company that takes series pitches from people, and it’s just amazing the shit we get. One was this awful idea about a team of homeless veterans that turn into superheroes and dude, like, why? The show just makes fun of the homeless, the mentally ill, and the physically disabled. What are you trying to say with this? It got rejected for obvious reasons, but can you imagine if it was sent to someone who didn’t care about social responsibility? There’s already a lot of crappy art out there; don’t add to it.

My partner and AYW contributor, Alex Krokus, and I are adapting Ben Passmore’s comic Your Black Friend into an animated short. We’re aiming to get it done in the fall, so that’s exciting. We just wrapped up a gif showcase for zinefest Paper Jazz here in Brooklyn, and it was a lot of fun to put together. The showcase is online on our collective Vimeo page, Doggo Studios.

My Instagram is probably the thing I update the most: kddaawwgg.