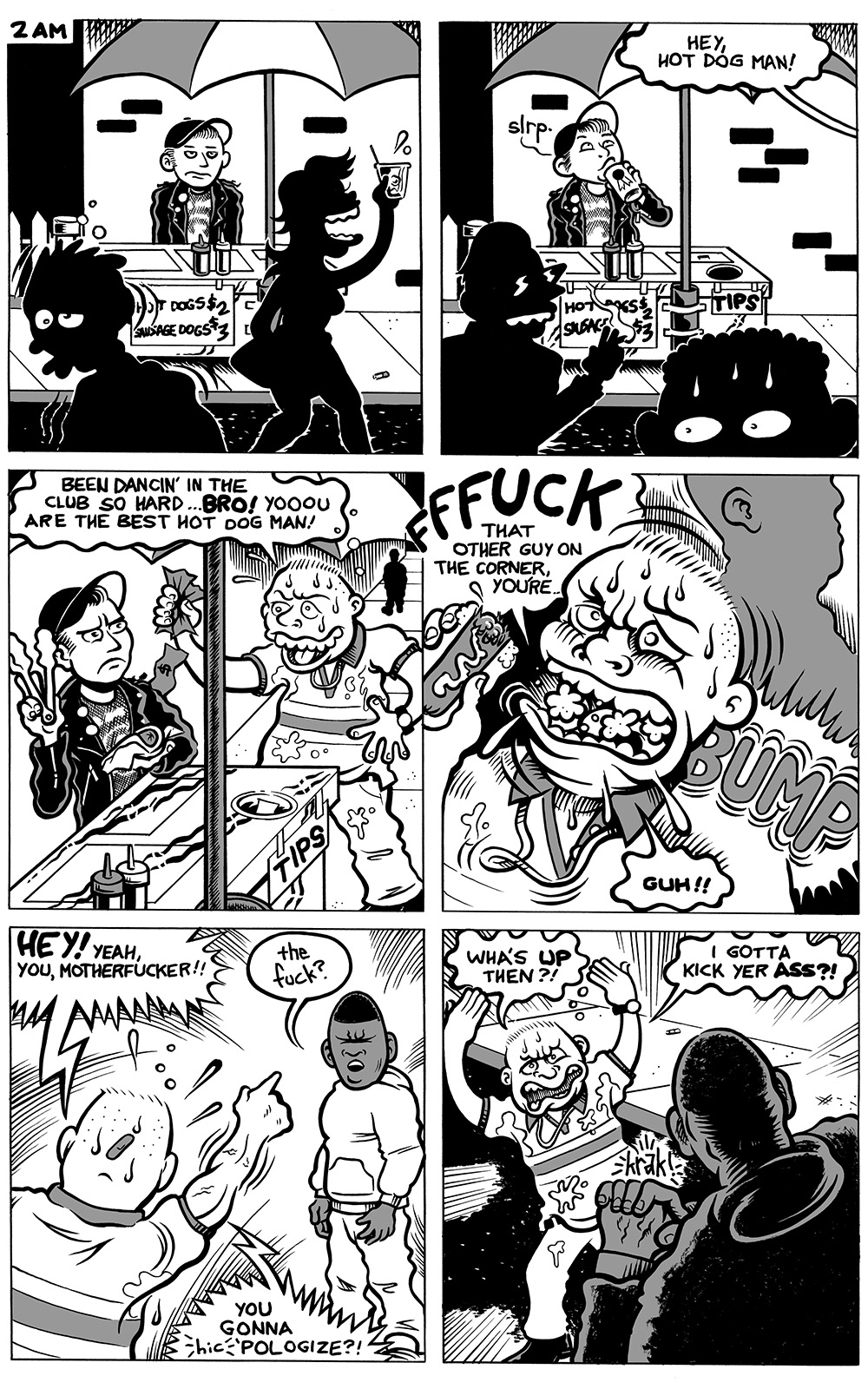 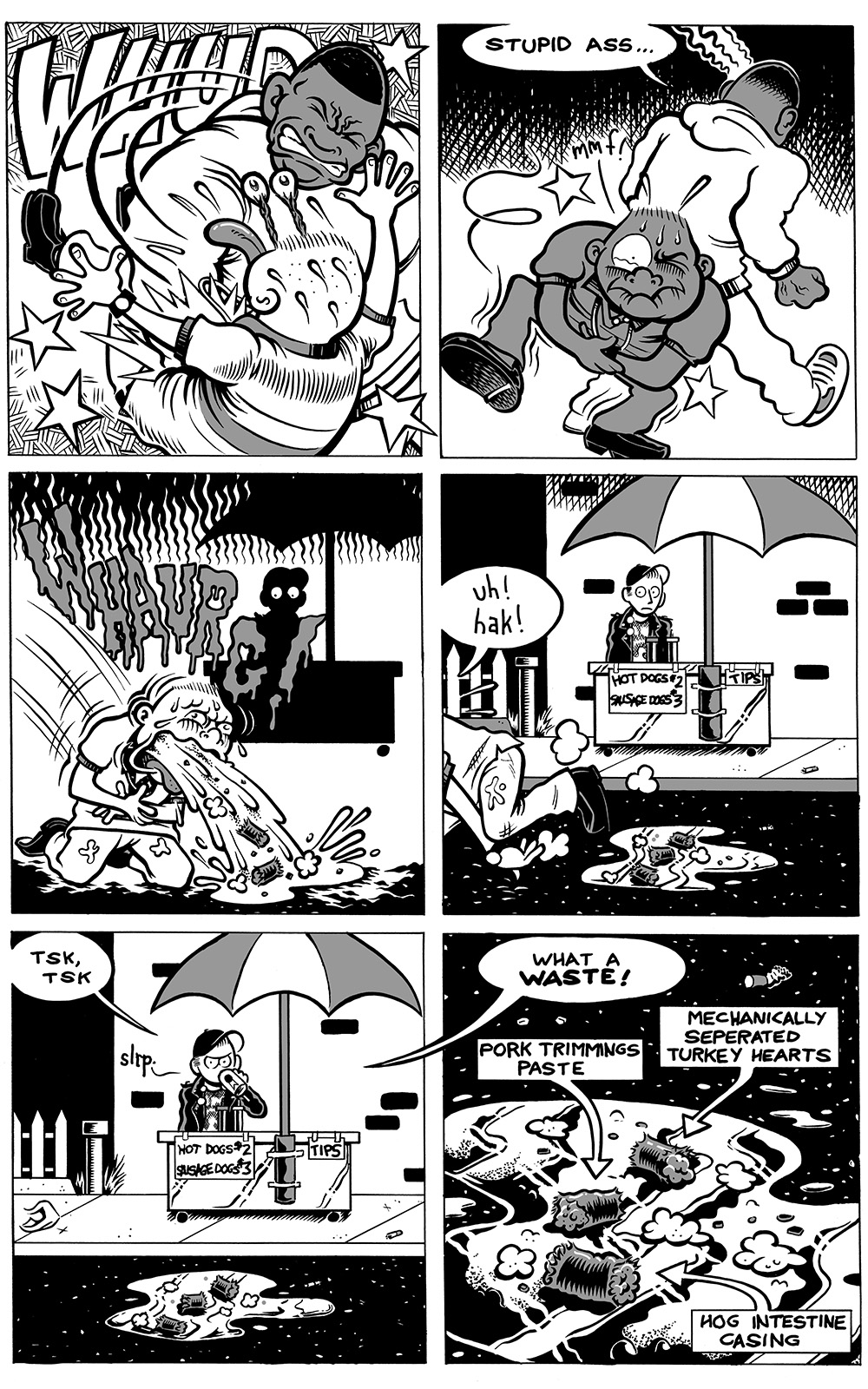 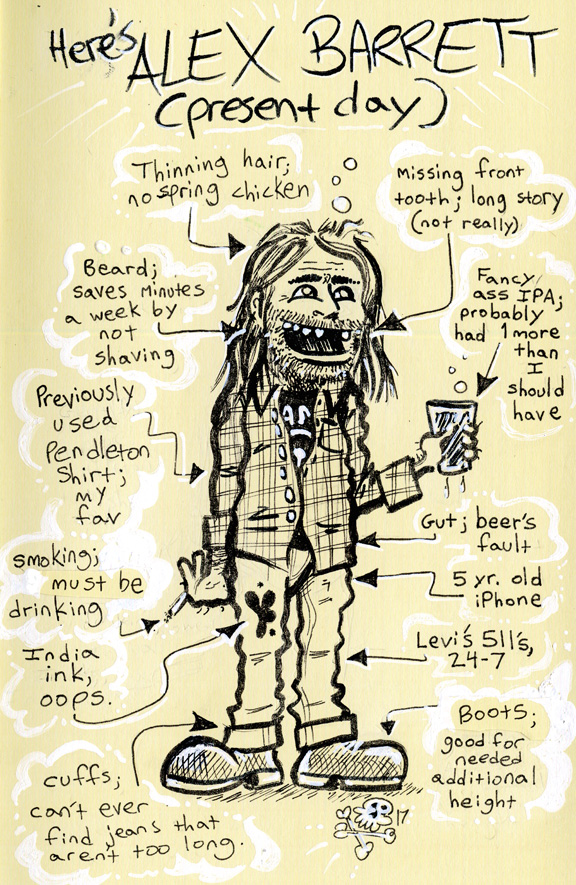 Interview with Alex Barrett by Natalye Childress for Silver Sprocket

I’d been living in Savannah, GA, and going to SCAD for about two months. I had just enough money to pay for school, but it became apparent that if I wanted to eat, pay rent, AND graduate, then I needed a job. I walked into my boss’ restaurant one day after the lunch rush, asked if they were hiring, and I was in. I think he may even have hired me on the spot, since he had just lost his previous hot dog vendor.

I have many stories from that job/time in my life. I do intend to make something more substantial out of them, but that particular instance is the short answer to the question “What was that job like?” That scene could have happened on any night: me just standing for long periods of inactivity and observing the wildlife, occasionally interacting with someone who wanted food.

Some other memories of that job: I saw a man beaten nearly to death; I saw a completely naked woman stumbling around in the streets; gunshots; street brawls; cops on horseback beating people back with batons and pepper spray.

And some of the better stories involve my crazy boss, not the people on the street. I’d set my cart up around the block from the late-night lunch counter that he owned. He was an entertaining person — a tall, intimidating, cokehead Kenny Powers-type guy who often had a pistol tucked in his waistband, swigging a Miller Lite with one hand as he flipped burger patties with the other. We’d hang out after close (4 am) and drink beers until the sun was up.

I left a few months after graduating and followed a girlfriend up to North Carolina. For various reasons, the hot dog cart was not a sustainable career — definitely not my passion. I also just wanted to live in a new place, as I’d been in Savannah for 2.5 years. My boss and I were standing in the alley on my last night and he handed me 100 bucks as a parting gift. He started to get choked up, so we quickly shook hands and I was on my way.

Actually, I’ve only ever had shitty jobs. So, the hot dog cart was probably the best one. It was the most memorable for sure. Best worst job!

My dream job is to make art full-time: freelancing for clients, split with drawing and selling my own products and comics. Currently, that’s my part-time job, alongside working at a printery in my neighborhood.

I’ve always drawn. I also wrote songs and played in bands until a few years ago, and it all filled the same void. I despise boredom, but it’s never a problem if I’m left to my own devices. Creating makes me happy and keeps me from losing my mind. I feel like I’m doing exactly what I am meant to do when I’m drawing. It gives me a purpose.

It can also make me feel like crap if I am frustrated with how something is coming out. I don’t like most of what I make once it’s finished, but that’s normal, right? Thinking I suck drives me to continuously improve!

Art is like scientific research in a way. You don’t always know the value of the data you’re collecting and you might not know the purpose of the art you’re making or the skills you’re accumulating. Eventually, though, you or someone else may realize the value in the work that you’ve done. Ha, that sounds simultaneously depressing AND motivating to me.

Yeah, but no more than anyone else. Everyone has a social responsibility if they are going to be a part of society. I do think artists have a personal responsibility to make art that is true to themselves. Beyond technique, there isn’t much to be learned from art that is produced only to appeal to what’s popular and what’s selling. I look to art for insight and inspiration; strictly commercial stuff is usually generic and pointless. Or even worse, it’s forced and unnatural (although that can make for some unintentionally hilarious stuff). There’s enough soulless drivel out there — make something personal, please!

The first chapter of my comic, “Sub-Base,” came out in early March. It’s a full 11 x 17 page in Vision Quest #7, Portland’s free comics paper. I’m working on the next chapter now for VQ #8, and it’s supposed to be out in time for Free Comic Book Day. I’ve been planning this comic for years in my sketchbooks. The initial inspiration was to tell a story in a format that resembled comics merged with the video game level walkthroughs that were printed in old issues of Nintendo Power. At first I was going to put them online as side-scrolling pages, but the vertical newspaper page makes more sense. The story starts on top of a mountain and moves down, down, down to a subterranean base.

If someone liked my comic, they can check out my online store for comics and shirts and stuff. Also, I’m currently doing an ongoing story, the aforementioned “Sub-Base” for Vision Quest, a free comics paper featuring cartoonists from Portland, OR. And I’m always posting stuff on Instagram.