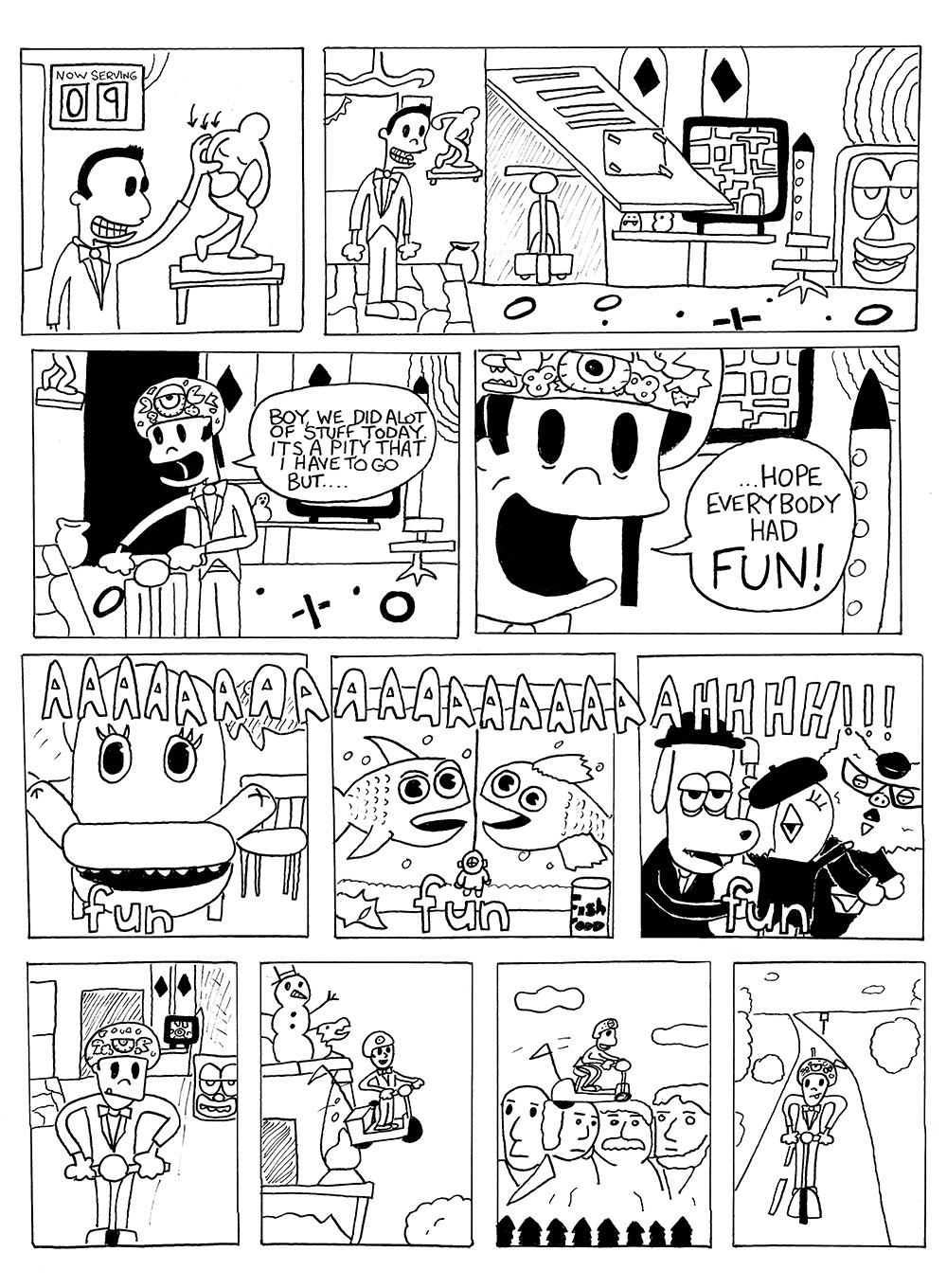 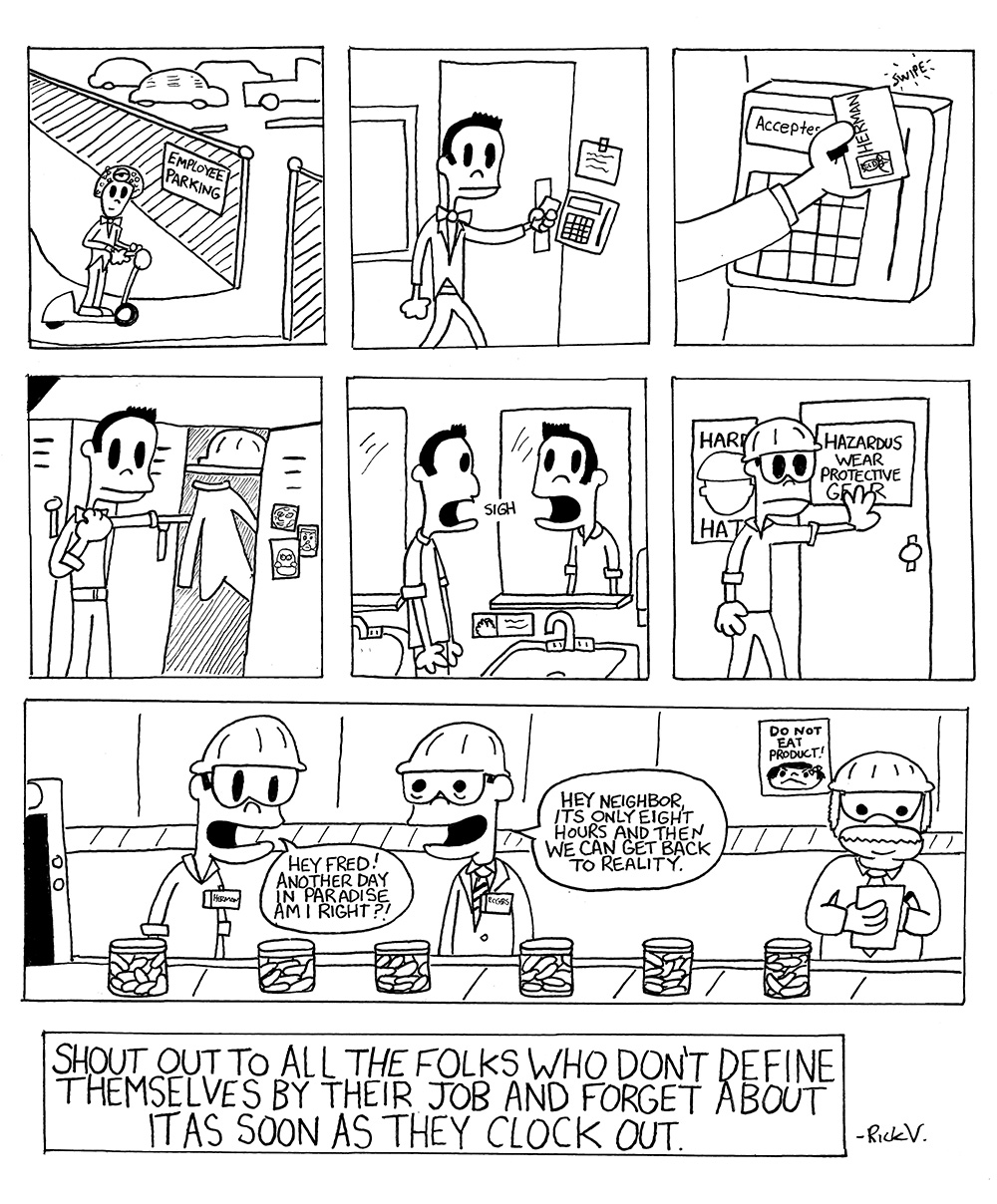 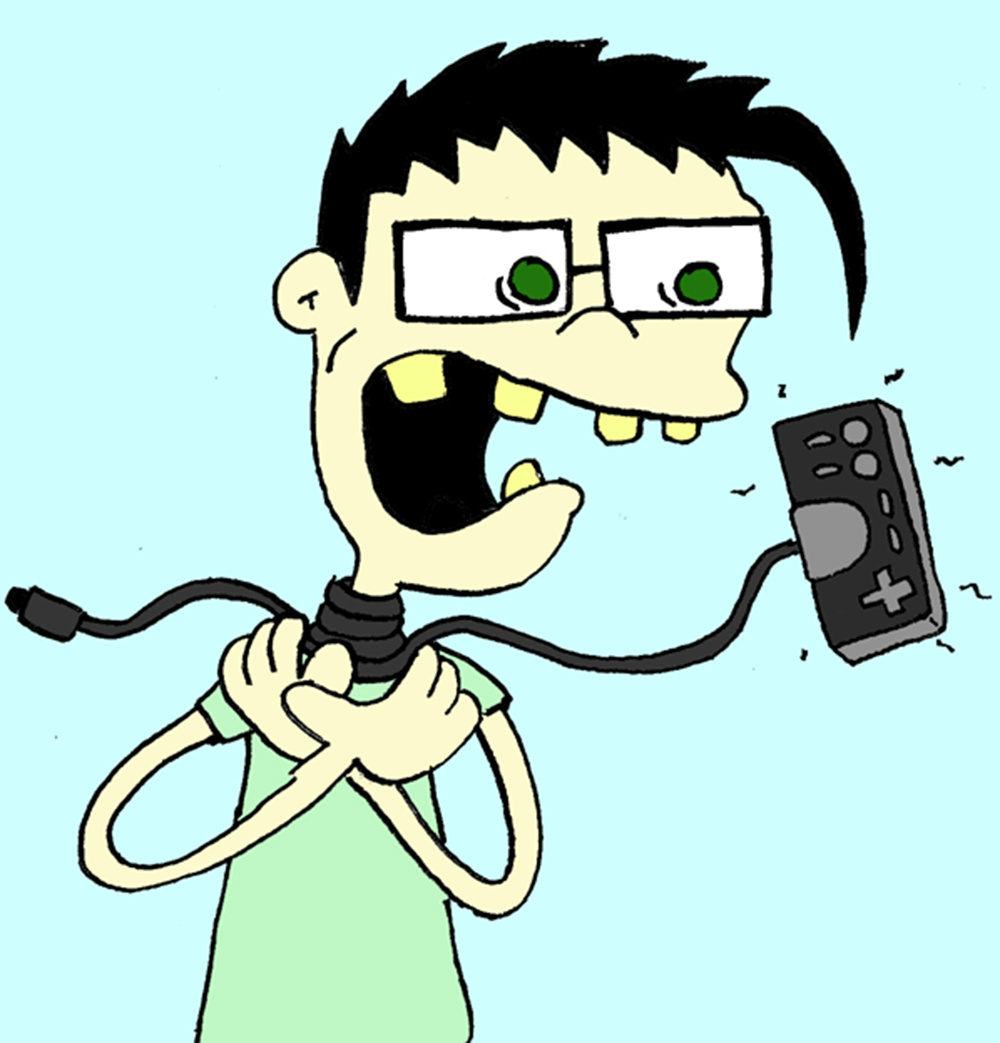 Interview with Rick V. by Emily Timm for Silver Sprocket

In this As You Were comic, you chose to focus on Pee-wee’s Playhouse. Is there a reason you chose that subject instead of one of your own experiences?

First of all, I love Pee-wee Herman. And I have been wanting to do that comic for a long, long time. I want to say I thought about that 10 years ago. That’s how I feel about people in the punk community or people who have alternative whatevers. They have their crappy job they go to that doesn’t define them and they get off their job and do all their crazy stuff.

Like at my job (Patient Care Technician / Nurses Aid) people always ask me why I don’t become a nurse. And I tell them that I like what I do now because I have a lot of hobbies that keep me busy.

Do you think you’ll ever be able to make a living off of your hobbies?

I feel like if any one of us focused harder on our hobbies and made that our main objective, any of us could make money and make that our main job. It’s just a lot of focus that I can’t dispense for myself. And it’s not just due to my job. I have a hard time staying focused and staying in a room all day. You hear about comic artists who stay at home and draw for 12 hours a day. I don’t think I can do that.

They get a lot of vitamin D deficiencies…

I agree. And self-promotion is something that’s hard.

Yeah, self-promotion sucks. I’m bad at selling myself on anything anywhere. I like to write comic artists and tell them I like their stuff, never mentioning that I also draw comics. I feel like it would just come off as selling myself.

Your AYW comic featured some of the most involved backgrounds I’ve seen from you yet. Will you continue to make comics with more detail?

I feel like I should but don’t really feel that confident doing it. Maybe I should use a different-sized pen? In black and white comics, I think making detailed backgrounds can become an eyesore if you’re not skilled at it. You’ve got to have a certain panache to make backgrounds work. I thought about using some grey maybe? It’s hard to do that when you aren’t using a computer.

So do you only use one type of pen?

I have several sizes of pens and a grey marker. But I don’t use the marker because it’s too dark. I’m a total amateur.

What are you currently working on?

I post a comic on the internet every Monday. My deadline is every Monday to keep me motivated.

I have a series called I Text Brett After Each Star Trek: TNG That I Watch. That kind of comes out every other week.

I am working on a video game where I am in charge of animating the sprites. And I am no good at that. I’m trying to practice, so I am doing more animated things for the Instant Gratification Film Challenge.

Things I would like to be working on and I should mention just so people bug me about it: I want to do two tour diary comics.

Did you keep good enough diaries to go back and do that?

I did. But I feel like everything I do is an experiment. So I still need to experiment before I do something longform. For example, I have been experimenting using lowercase letters in comics. It makes your hand feel less cramped. You use lowercase, right?

I do pretty much whatever. I feel like I am also experimental in that I don’t have one set way I like to do things. But maybe that is something that will come with time?

We are both in very experimental phases with our comics.

Do you want to talk about your current job?

As previously mentioned, I am a Patient Care Technician / Nurses Aid on a Cardiac Recovery Unit at a hospital. It’s three days a week with 12- to 13-hour shifts a day. So some days I feel like shit and don’t want to do anything after work.

But it is a rewarding job. You get off work feeling awful, but you get a sense that you did some good that day. I help folks walk, I help them pee, I help them poop, and I take blood out of them. I assist with doctors, nurses, and physical therapists. It tends to be a job for nursing students so it’s sometimes weird being 34 and doing it.

I saw that you once did a comic on Post-It notes from your job. Do you get a lot of time for that?

Not really. But there was one day where I penciled a three-page comic; it was really slow and we only had three patients. It was the most I have ever gotten paid to draw comics.

What’s the worst job you have ever had?

I worked at Walmart when I was 17. I was hired on August 12, 1999, with like 18 other people. I called us twelvers. It was the most mind-numbing corporate job I ever had. I was the last twelver to be fired, on February 19, 2000. I had asked off for my band’s first show (Skunky Beaumont). I asked off a month in advance and they still scheduled me. I didn’t show up so they fired me. Skunky Beaumont later played a pirate show in the parking lot of Walmart. We were only asked to leave after a customer heard us say “masturbate.” Which we did.

What bands do you play in now?

I was once in a band with Miss Emily Timm called Moody School (formerly Flag Day) before she moved on to greater things. I am in an instrumental surf band called Found Drowned. We just toured and it went really well. We have a 7” out now.

It’s kind of weird booking a tour for a surf band and having to explain to show bookers and venues that you’re still a punk band that wants to play house shows and play with hardcore bands. And we don’t want to play with instrumental shoegaze bands.

Oh yeah, Dakota (from that band The Wild) and I are really into Ernest P. Worrell. By no means ironically. We are putting together a zine all about Ernest either called Ernest Goes To Kinkos or YouknowwhatIzine. Those are both working titles. It will have illustrations by Steve Thueson, Emily Timm, David Yoder, Penina Gal, and others.

When are we going to table at a show?

I’ve only tabled at one convention and it was not fun. It was called the Indy PopCon and it had a lot of cool things I wanted to see, but comic wise, it was not my scene. I just can’t do that thing where you make stuff that panders to the pop culture audience. I love pop culture-y stuff. I just don’t want to buy it, let alone make it.

Your general approach to making things seems to be to do it quickly and make it short. Why is that?

I have a short attention span and some form of ADD maybe?

I don’t like drawing comics quickly. I know it looks sloppy but it takes me a long time. I did a nine-panel strip recently that took me two days. It just looks quicker than it actually is. I’m just not very good at drawing. But I like what I draw.

On my Tumblr it says “Quantity over Quality” because I may not be the greatest at comics, but I sure do make a lot of them. That’s how comic strips are supposed to work, man. You just dish them out. It can look simple and still be funny, e.g. Nancy is so simple.

I also like Nancy. What comic people have you been liken’?

I like the Ben Passmore and Michael Sweater books I got from Silver Sprocket recently. Steve Thueson has a good thing called Questmania. Penina Gal has a very cute comic called Glamera. David Yoder now does a thing called David and David At the Movies. I really liked Graveyard Quest by KC Green and Trashed By Derf Backderf. I have read every comic our library has by Shigeru Mizuki. And Batman, he’s usually good. Even in Lego form.

What else do you have out there?

Well, I did a birthday-themed comic zine with Emily Timm and Ben Snakepit. We all have the same birthday. It’s called Flag Day and you can buy it from me.

For more from Rick V., check out his website.