The Toronto Comic Arts Festival is the goddamn best indie comics event in North America that has no business being so awfully nice to us.

Fellow publisher Gabby of Sucker Press was kind enough to pick me up from the airport. Gabby makes and publishes some really good comics that are sometimes scary and give me bad dreams, is kind and fun, and a harbinger of disastrous trainwrecks in the best possible ways.

The ride to her apt featured a serenade of Canadian treasure bangers like Neil Young and Alanis Morissette then we ate confusing skewers of Japanese BBQ until 4am.

On Thursday we checked out the town. Turns out this was probably not Harry Potter. 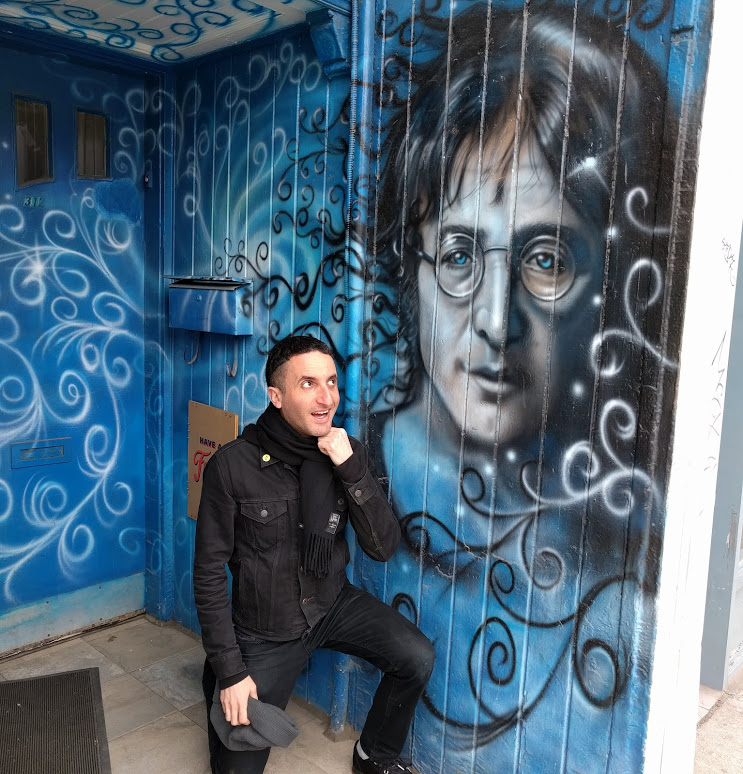 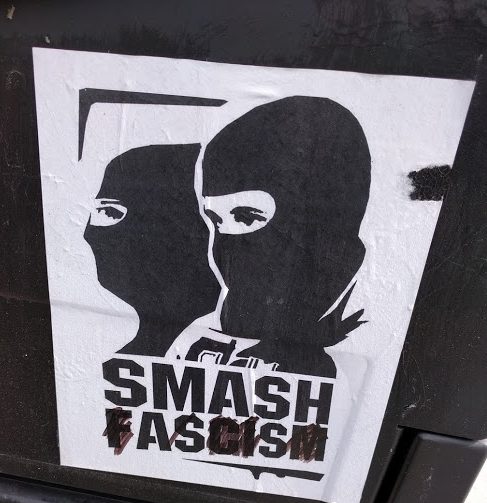 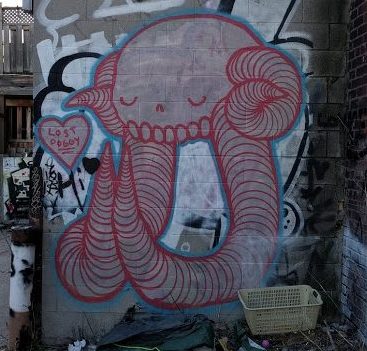 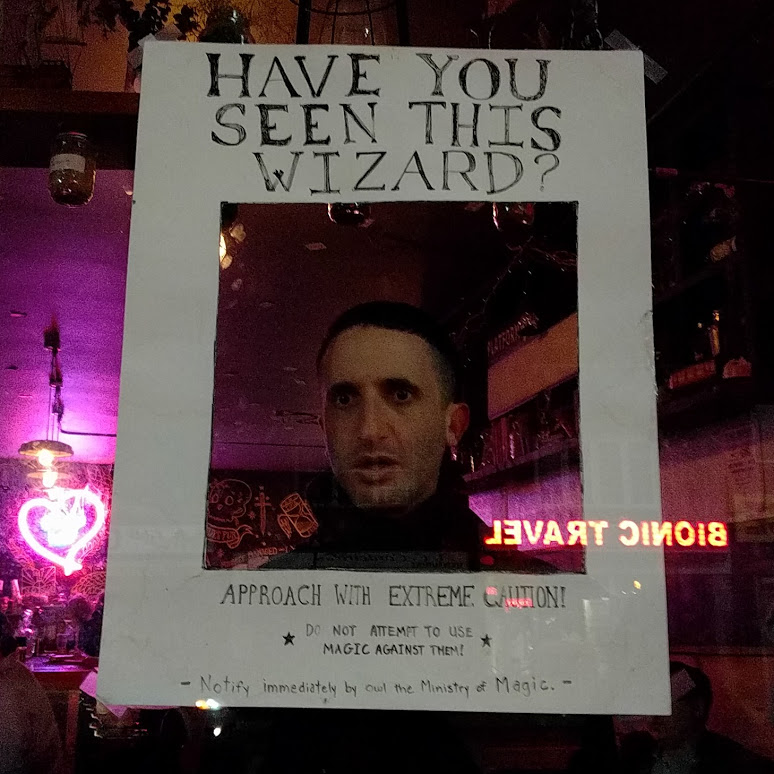 Friendships. Beers. Met up with Ben Passmore for some pool and silly confrontation with business suit jerks disappointed at how long it took us to finish a pool game and jealous of our chicken-wing dance moves.

Very drunk a few hours later,  climbed the wall of Gabby’s apt to break in to the 2nd floor because who has keys anyway.

Slept in Friday. Way in. Like 2pm in. Gabby’s car was covered in tree shit so we went through a car wash!

This was really exciting because living in San Francisco without a car. I haven’t been through a car wash in ages. These are so damn fun. Date request: Get a car and take me through a car-wash. 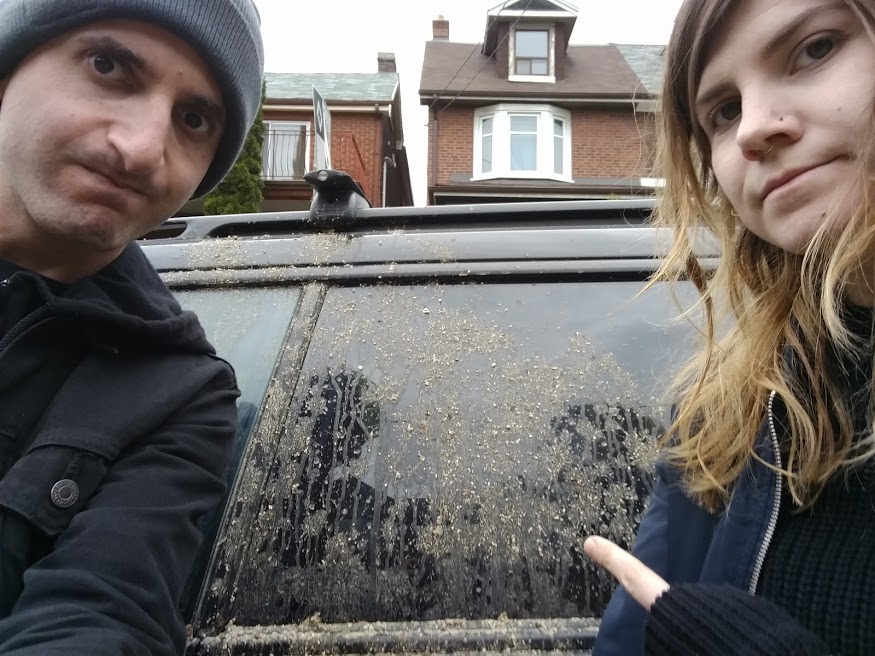 We set up our booths for the weekend. Check out this Vanilla Sky TCAF with no people! 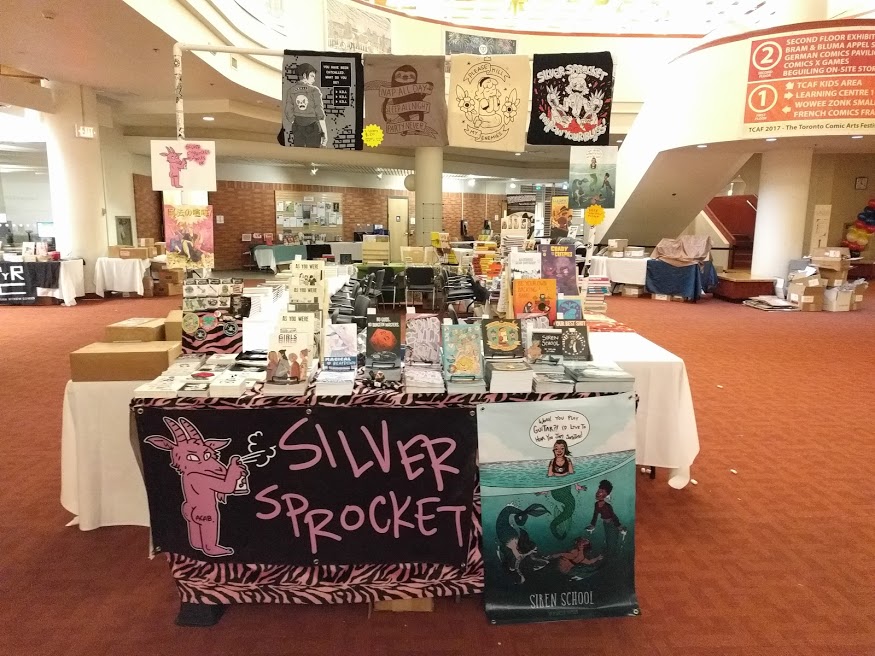 Split as Gabby picked up cartoonist buds (and As You Were contributors) Alex Krokus and Krystal Downs.

My memory is hazy around this part, but at some point my scarf lit on fire but we intimidated the bartender into not kicking us out of something. Maybe that was the next night? I’m probably forgetting a few parts of the story here, but TCAF went gosh darn amazing.

You can’t even see our table through the crowd! That’s me flexing towards the bottom left under some shirts. Welcome to the gun show. 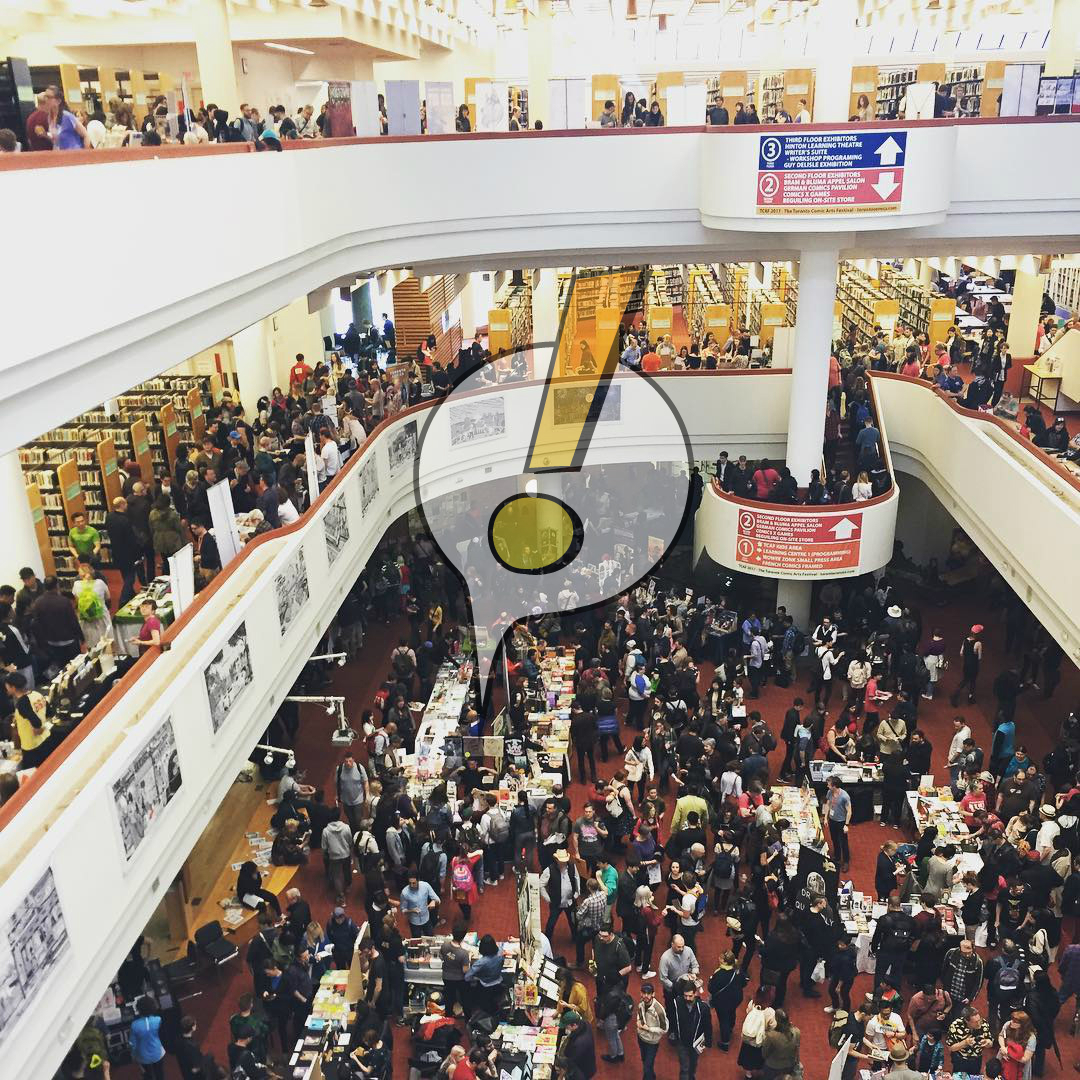 We had no chill out minutes at all. Our table was slammed the entire time and we sold out of nearly everything.

Six year old’s inspirationally destroyed the shit out of the dang police car. 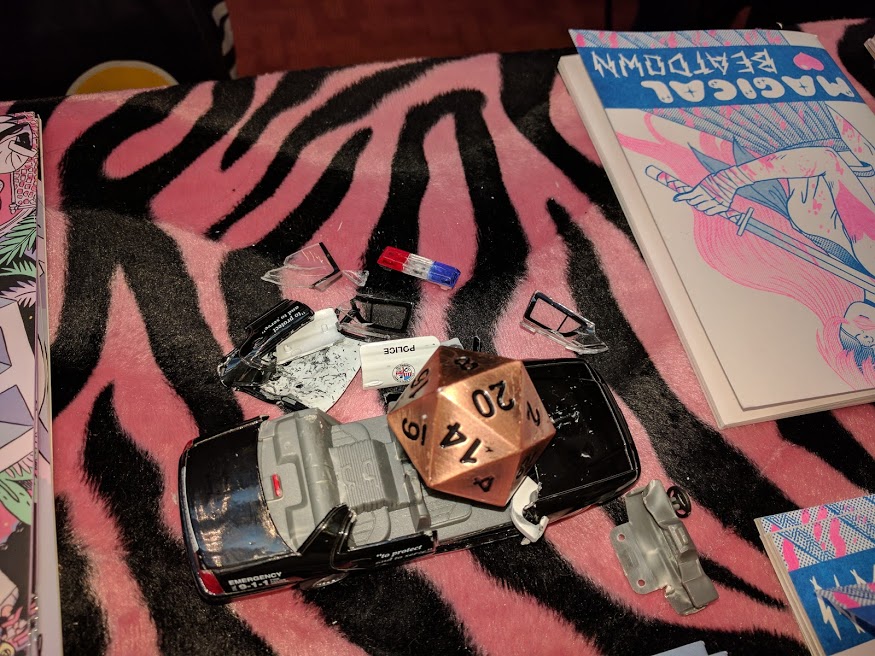 Thanks big-time to Ben Passmore and Isabella Rotman helping out with the table, hanging out and slinging the comics.

And geese, for MAKING the comics!!! 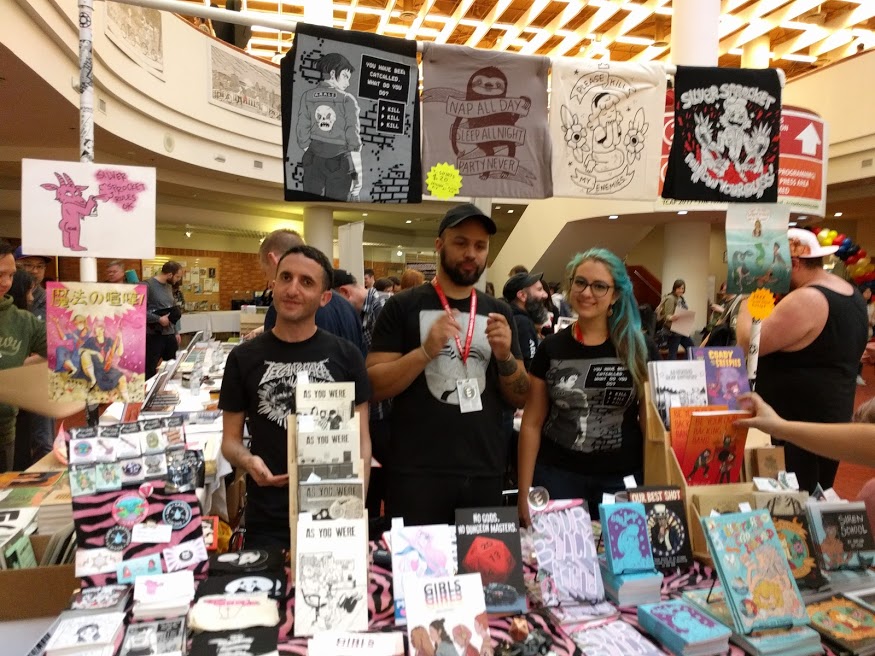 Then was the after-party with lots of talking to badass comic artists, dance moves, Ben taking over the sound system.

On Monday Ben and Gabby took off for Philadelphia while I got to take lots of naps, learned all about Korean food, and read all these comics I got. 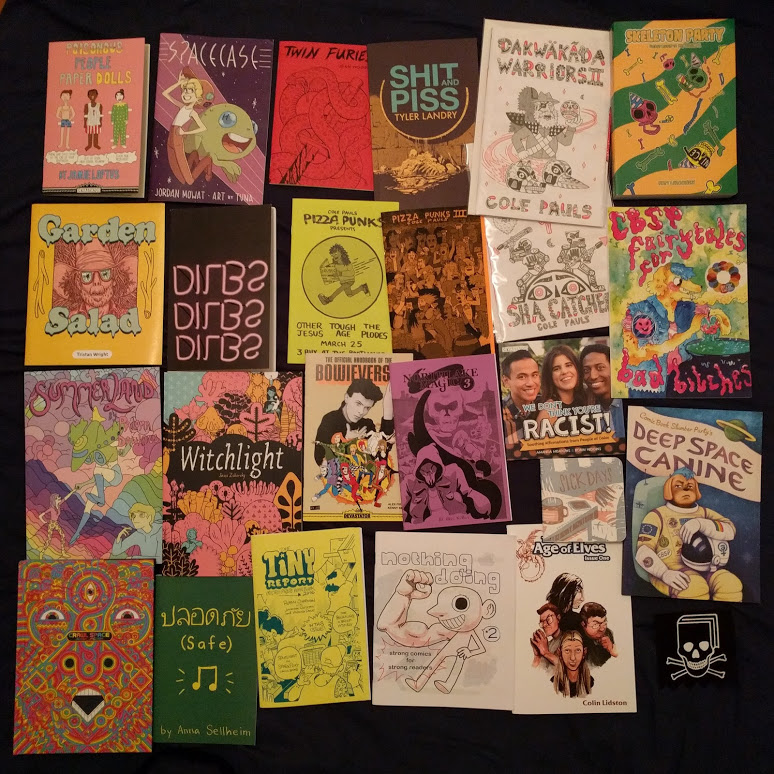 Then Tuesday I took EVEN MORE NAPS.

Then sold a stack of comics to The Beguiling, the bad-ass indie comic shop whose staff sets up the whole TCAF event. 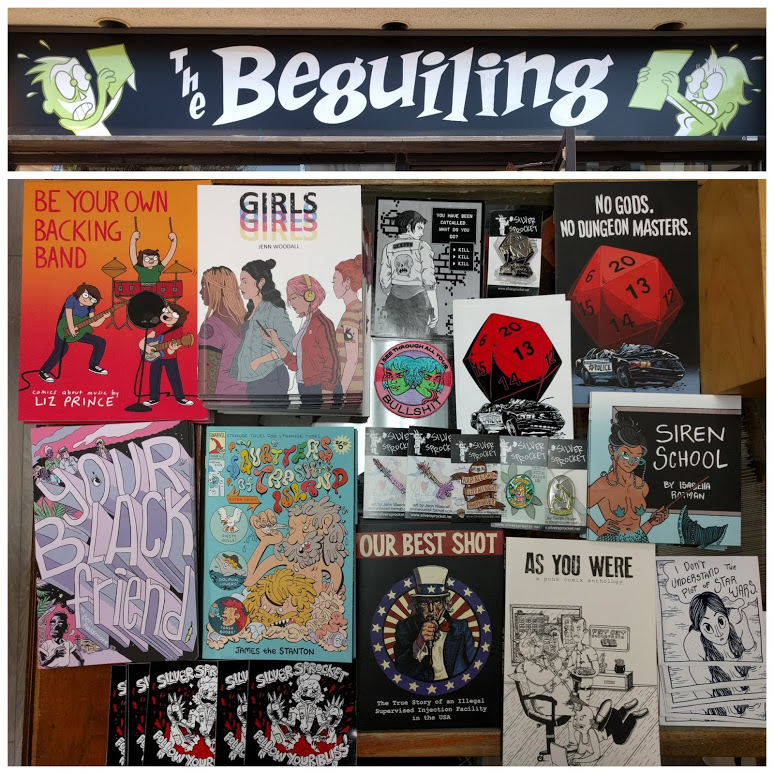 I thanked them for giving us such a rad spot on the first floor and mentioned that it would be totally fair if they wanted to place us in the Toronto Reference Library basement bathroom or somewhere way obscure next year to make up for it.

Turns out there IS a basement bathroom, but it isn’t open to the public since it was written about in Slurp Magazine as being one of Canada’s top ten cruising spots so the library thought this meant they had to shut it down. BUMMER!!! We will be submitting a formal proposal for an all smut art instillation in the basement bathroom for next year’s TCAF.

After that I got some coffee at a dumb place that was in a movie,

THEN got to hang out with Jenn Woodall and Trevor Henderson in their apartment of fantastic Halloween treasures.

Jenn and Trevor are two of the nicest most talented artists I know and their place is decorated floor to ceiling in the best spooky artwork, sculptures, and just plain rad stuff. Jenn already melted your brain with badass artwork but just you wait till you see her badass sculptures and sewn together creatures, your brain is ice cream in a river of hot lava on the Sun.

We ate vegan pizza and talked comic gossip for FIVE HOURS and I have a bunch of new movies, anime, and comics to check out.

That was about it for Toronto. I left some shampoo and a phone charger by accident but that’s OK.

Now I’m in Vancouver staying at the coolest basement lodging ever and will have some update about VanCAF and whatever else later.