“That Time I Almost Killed Randy” by Lukas Myhan

Previous Next
“That Time I Almost Killed Randy” by Lukas Myhan

Today’s comic, “That Time I Almost Killed Randy” by Lukas Myhan, is about the downsides of touring. 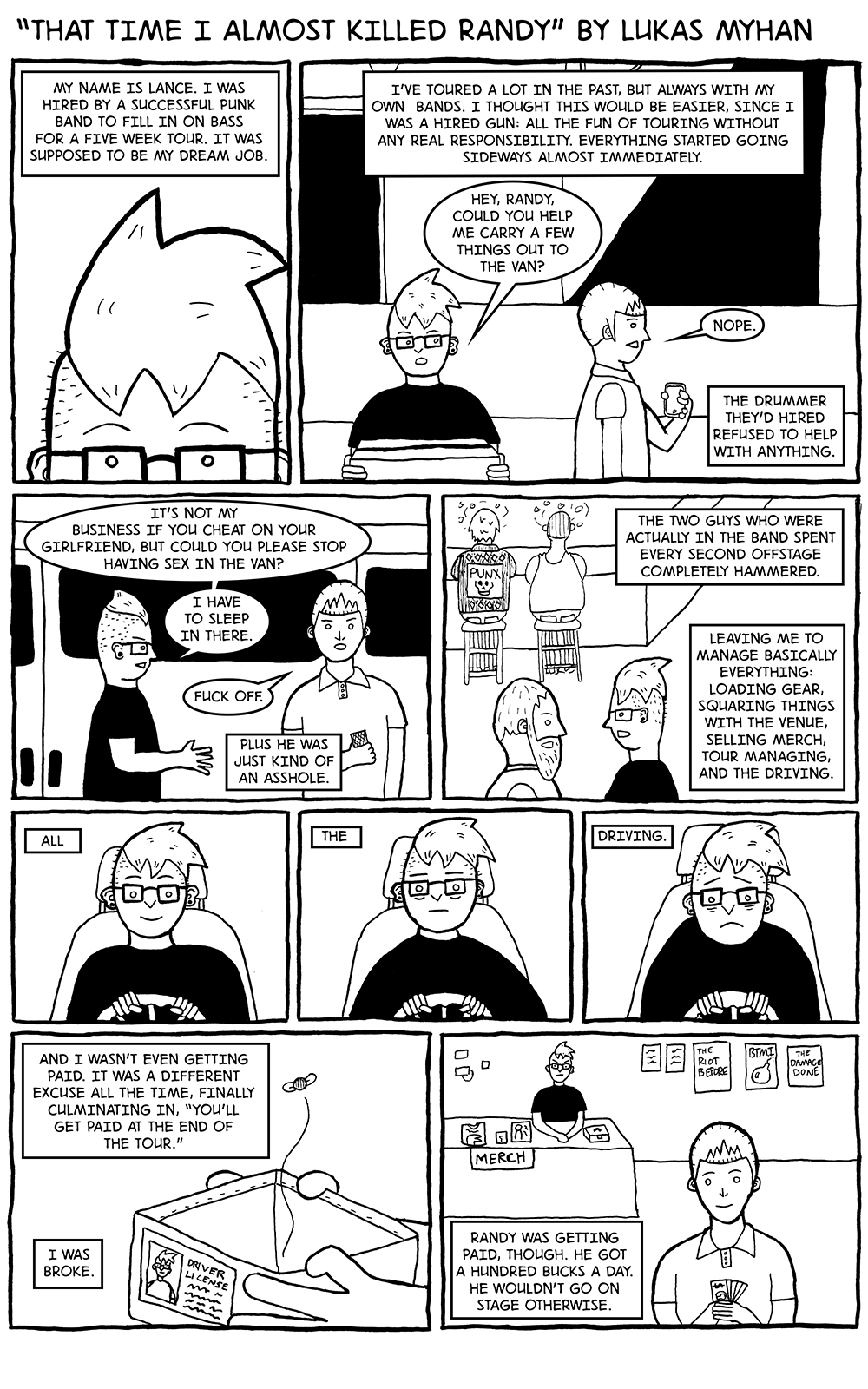 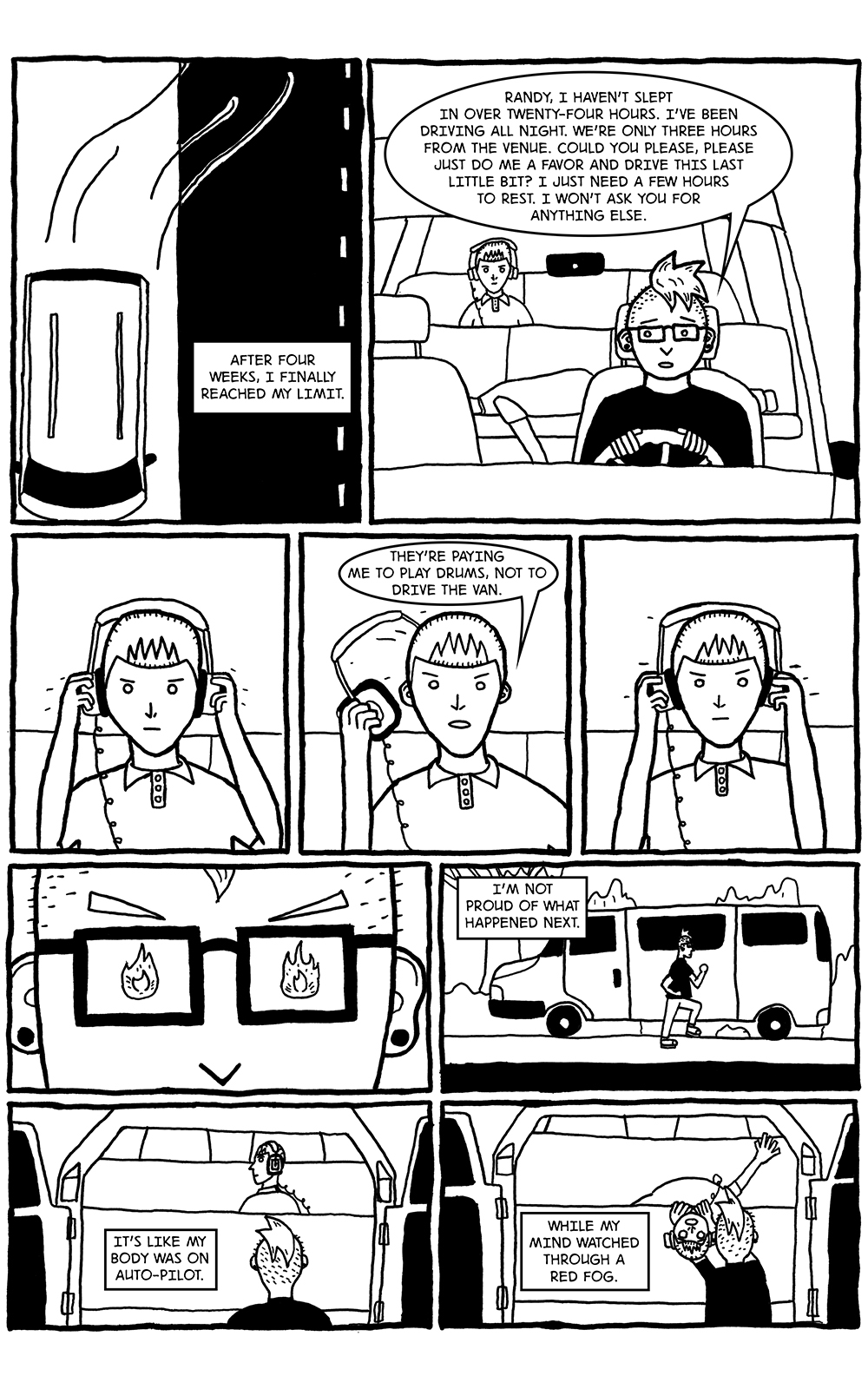 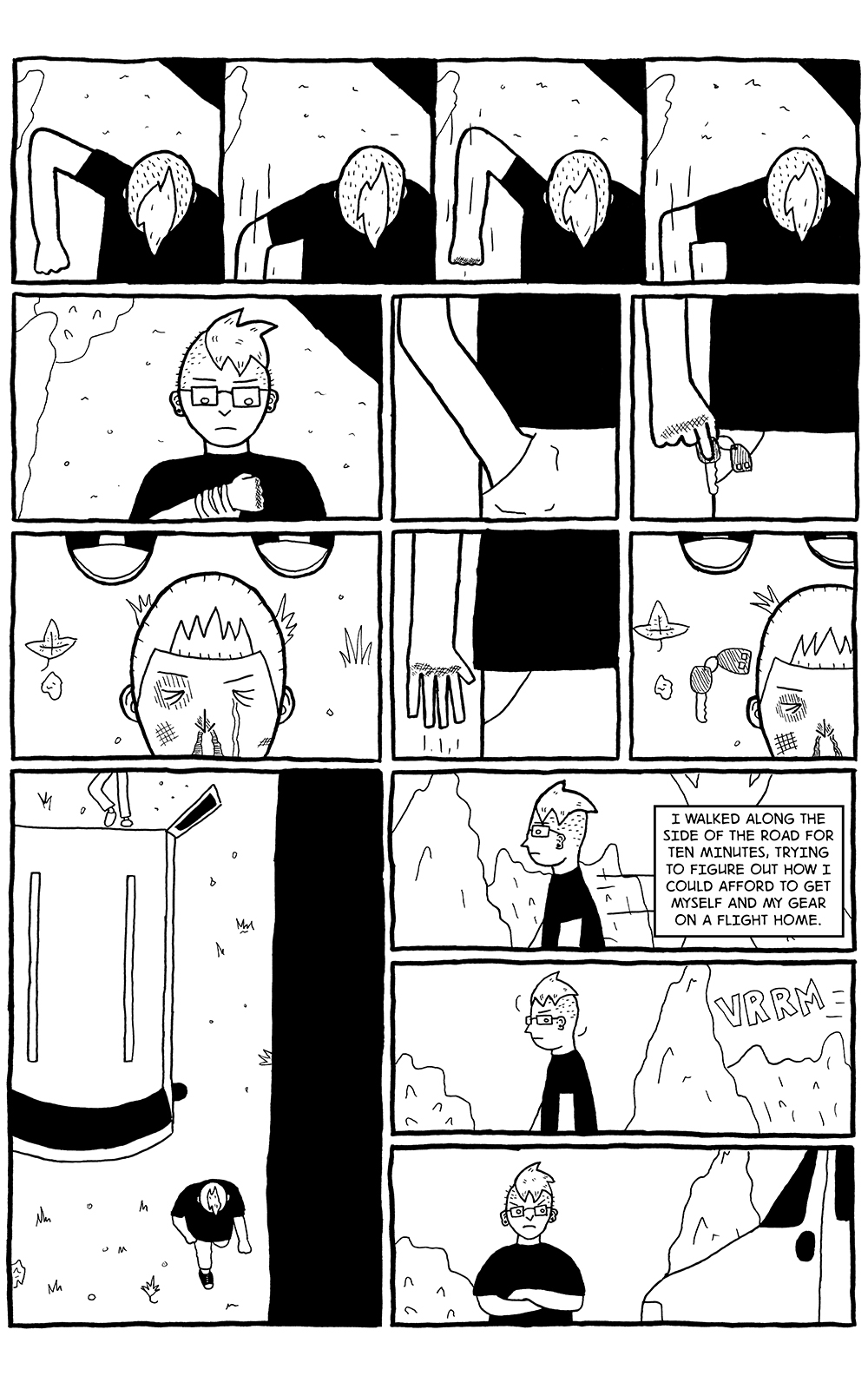 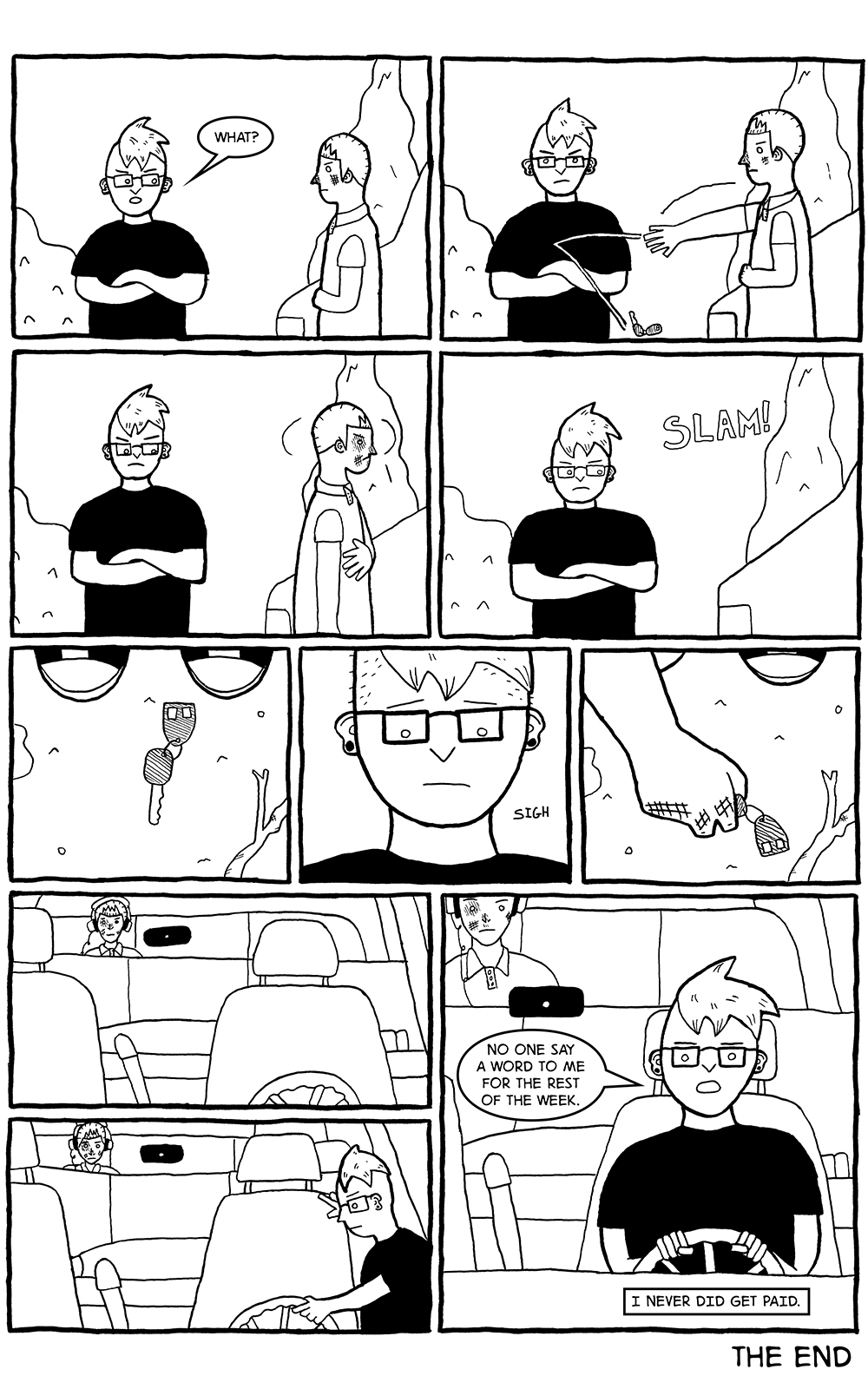 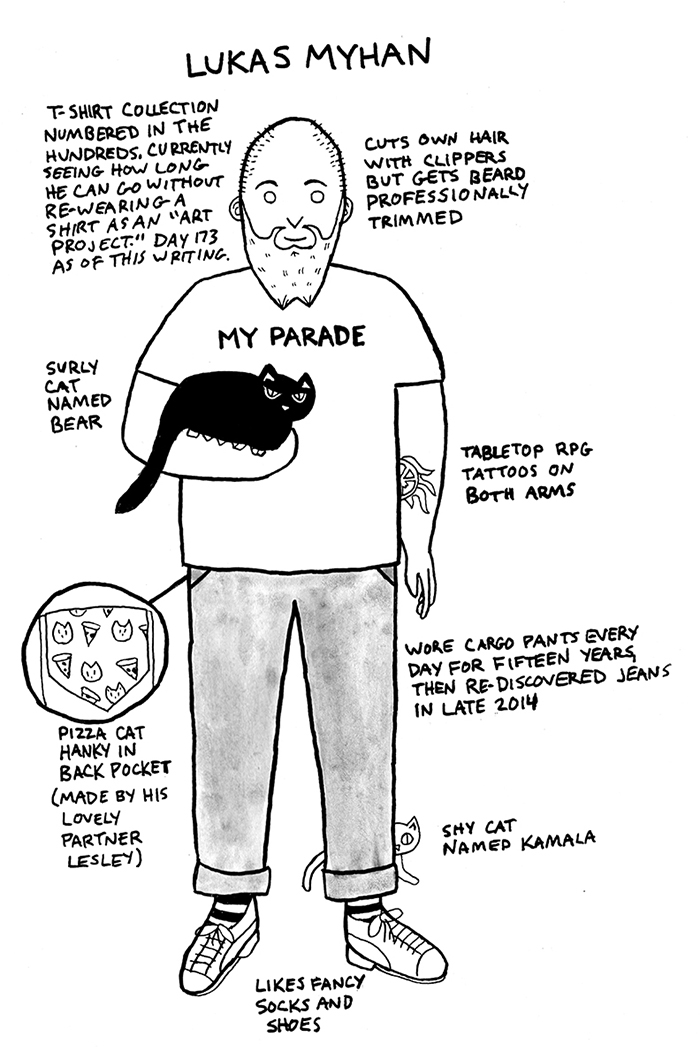 Interview with Lukas Myhan by Natalye Childress for Silver Sprocket

The story you share in the comic is actually based on a friend’s experience. Can you tell us more about it?

My friend’s story about this tour (which he calls the worst month of his entire life) has always stuck with me, and I thought it would be something other people might enjoy. I ran the idea by him and Avi, and they both seemed excited about it, so that’s the direction I ultimately went.

Why didn’t you chose to share a job you had?

I definitely started out trying to brainstorm through my own terrible jobs from the past; like everyone, I’ve definitely had a few. Easily the worst was selling supplemental life and disability insurance to members of local workers unions, the first non-temp job I had after moving to Seattle. Ultimately, though, I struggled with finding a way to make that story interesting enough that I wanted to draw it and that others would want to read it. It might have just been a limitation of my own imagination!

What is your dream job?

I’ve always thought it would be awesome to be a professional reviewer or interviewer. I’ve done both for fun over the years: publishing a podcast focused on local music for a while, as well as writing online reviews. I think it would be amazing to be someone who can do those things but actually get paid a living wage to do it.

For me, art has most importantly been about connecting to my friends and the communities of which I’m a part. Making things for their own sake can be fun, but what I really love is when art fosters connections and engagement among people, whether that engagement includes the artist or not. A love of the same music or comics or even just the craft of making comics has built so many bridges for me with so many people that I have come to really care about.

Are there any downsides?

The only downside that comes immediately to mind is time. I have a lot of hobbies and interests, and I’m not super great at time management. It’s really easy for me to put off drawing, saying, “I’ll work on that tomorrow,” and then tomorrow becomes several weeks of doing nothing. I’m also a pretty slow artist, so making significant progress on a project generally involves putting everything else besides my day job on hold so that I can focus and plow through the pages.

Absolutely. I think everyone has a social responsibility, no matter whether they make art or not. By that measure, when you create something for other people to consume/be entertained by, that’s just another extension of your existing social responsibility. Art isn’t always going to be political or revolutionary; often it’s just meant to be fun, funny, or diverting. But ultimately, the people creating it still have a responsibility for what they put into the world and how that affects other people.

I’ve been slacking on my art lately! I did contribute a couple of drawings to a charity project for Planned Parenthood organized by Lucy Knisely. I’ve also been doing a very lazy art project where I’m seeing how long I can go without wearing the same t-shirt more than once and taking a picture of each shirt as I wear it. I’m up to day 173 at the moment.

Comics-wise, I’ve been attempting to step outside my comfort zone, which is diary comics, and draw things that are more dynamic. Specifically, I’ve been trying to draw little vignette comics based on tabletop RPG sessions I’ve played. It’s hard though, because it requires a pretty different set of skills to draw that kind of action instead of just people talking and playing music, like most of my comics! I haven’t yet produced anything from it that I really want to show other people, but hopefully I’ll get there.

There are lots of awesome locals in Seattle who do amazing comics, like my friends Elk Papa, L Henderson, and Andy Panda.

Most of my influences are from the punk rock/auto-bio comics world, so folks who read As You Were are probably familiar with the books I’d recommend, like “Tomboy” by Liz Prince, “Relish” by Lucy Knisely, “The Infinite Wait and Other Stories” by Julia Wertz, “Little Fish” by Ramsey Beyer, and Mitch Clem’s Turnstile Comix series.

I also have another comic called “Tales of Success” that’s distroed by Silver Sprocket, if they want to see something specifically by me.

For more from Lukas Myhan, check out his website and his contributions to Razorcake’s Webcomic Wednesday.