“Hangin’ on the Telephone” by Steve Thueson

Previous Next
“Hangin’ on the Telephone” by Steve Thueson

Today’s comic, “Hangin’ on the Telephone” by Steve Thueson, is about working at a call center. 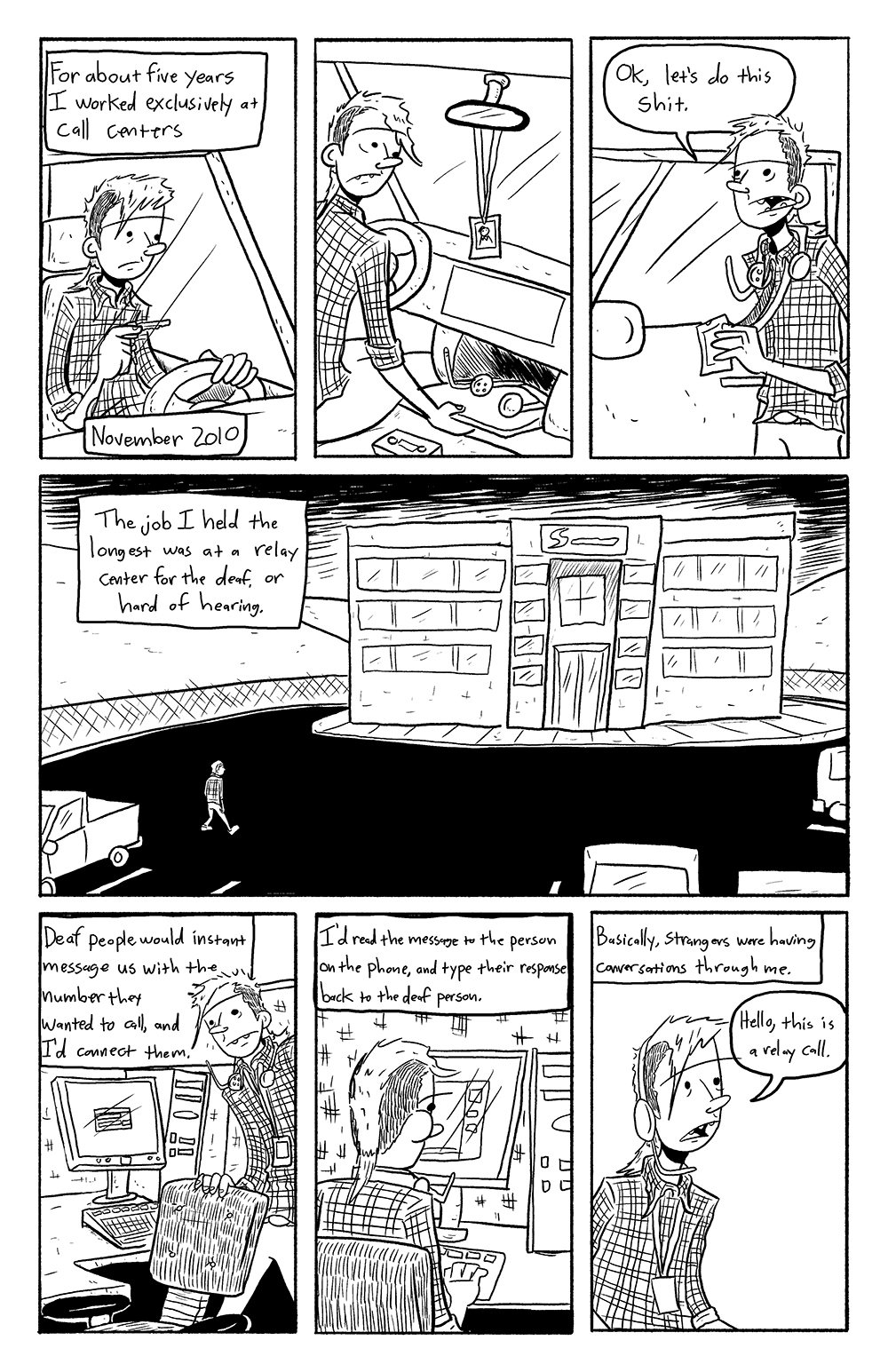 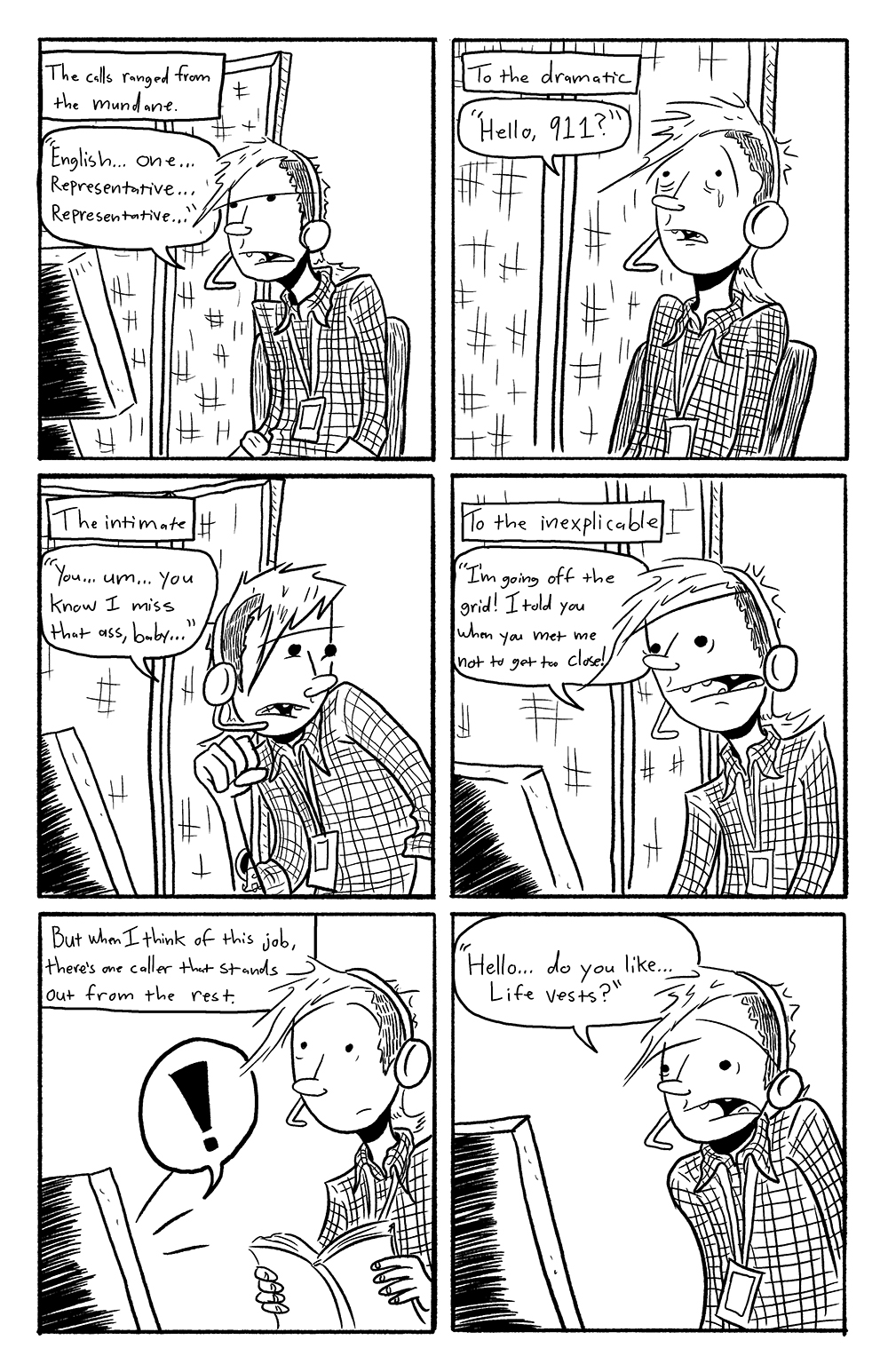 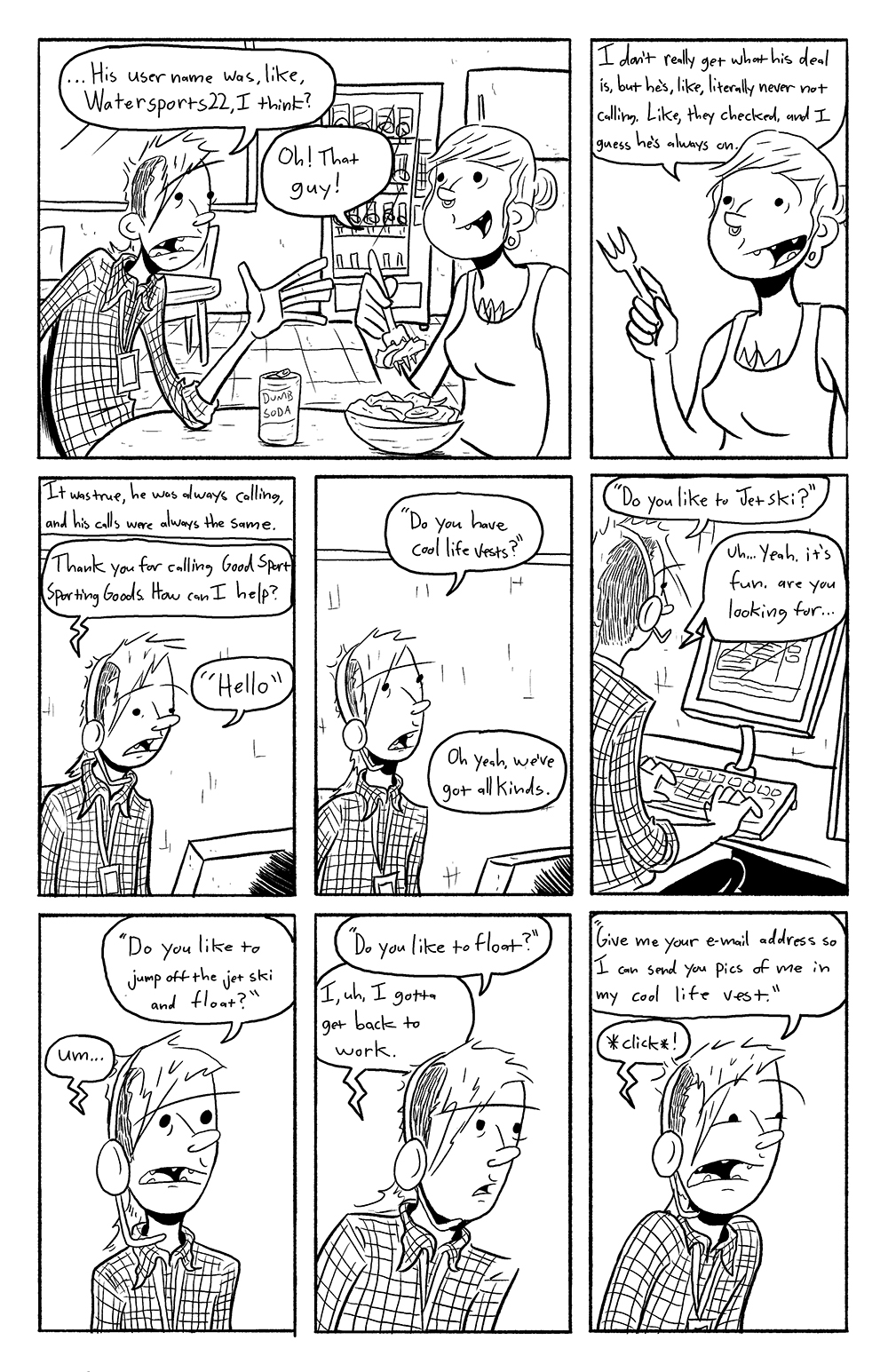 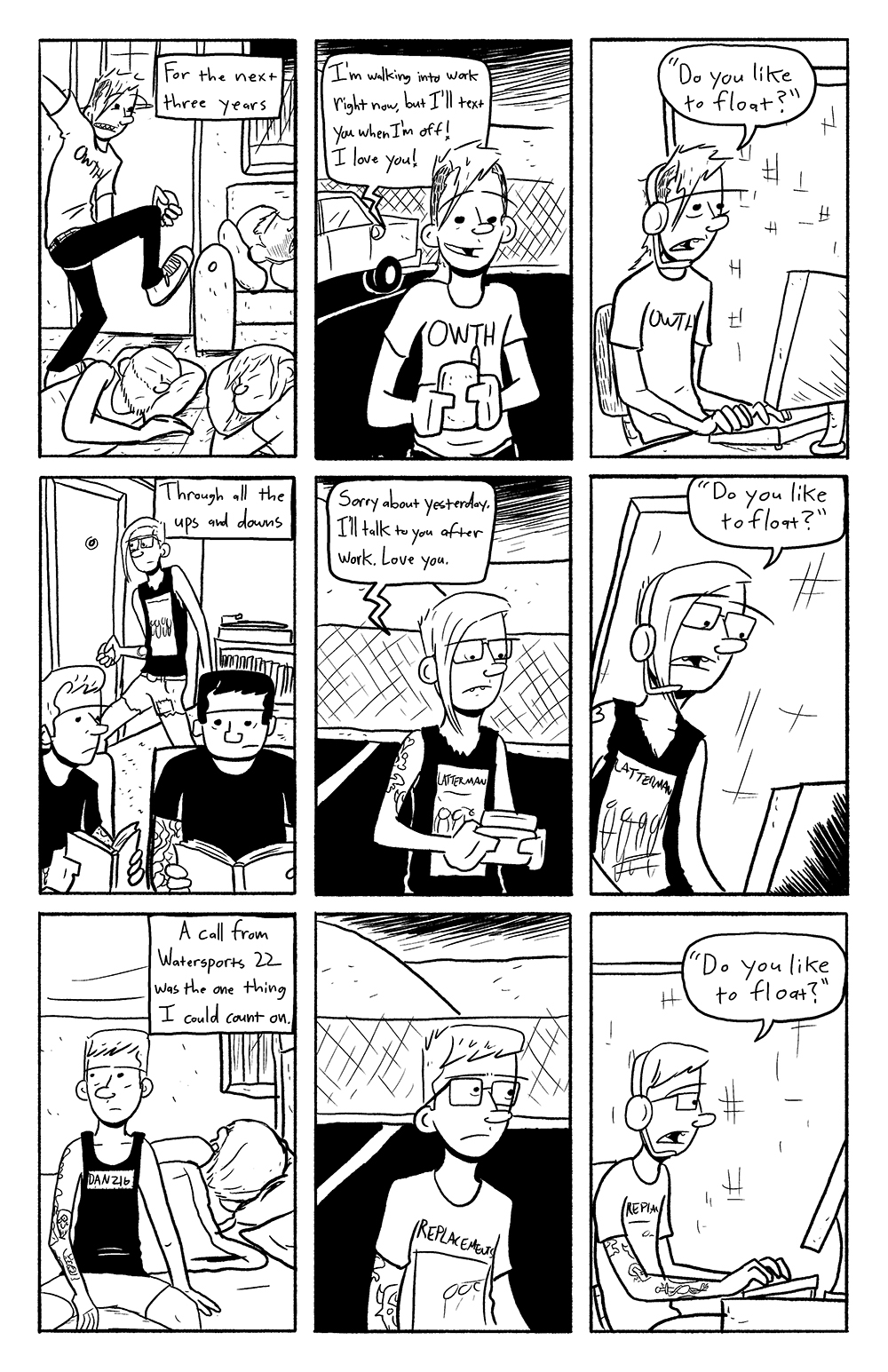 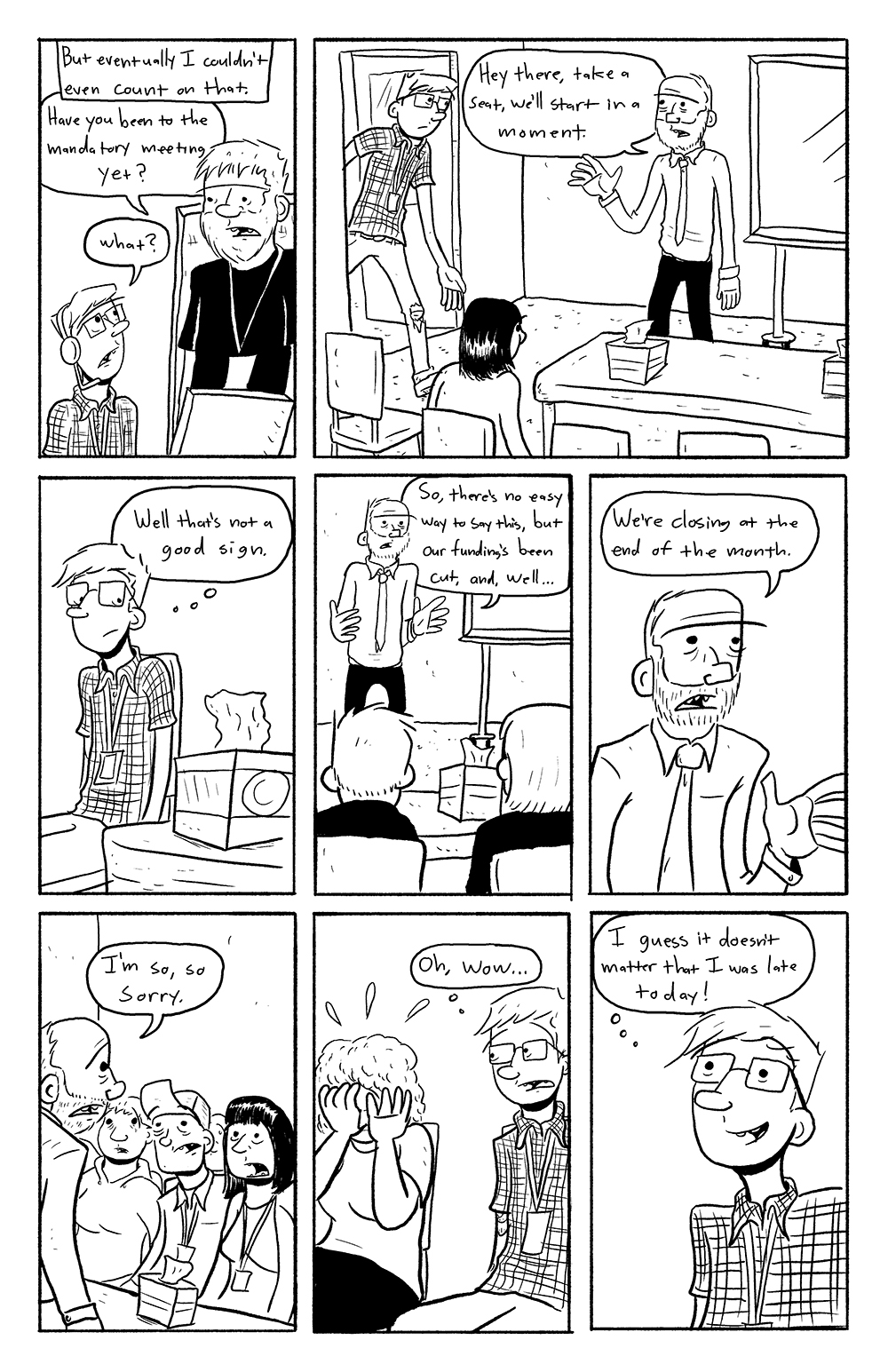 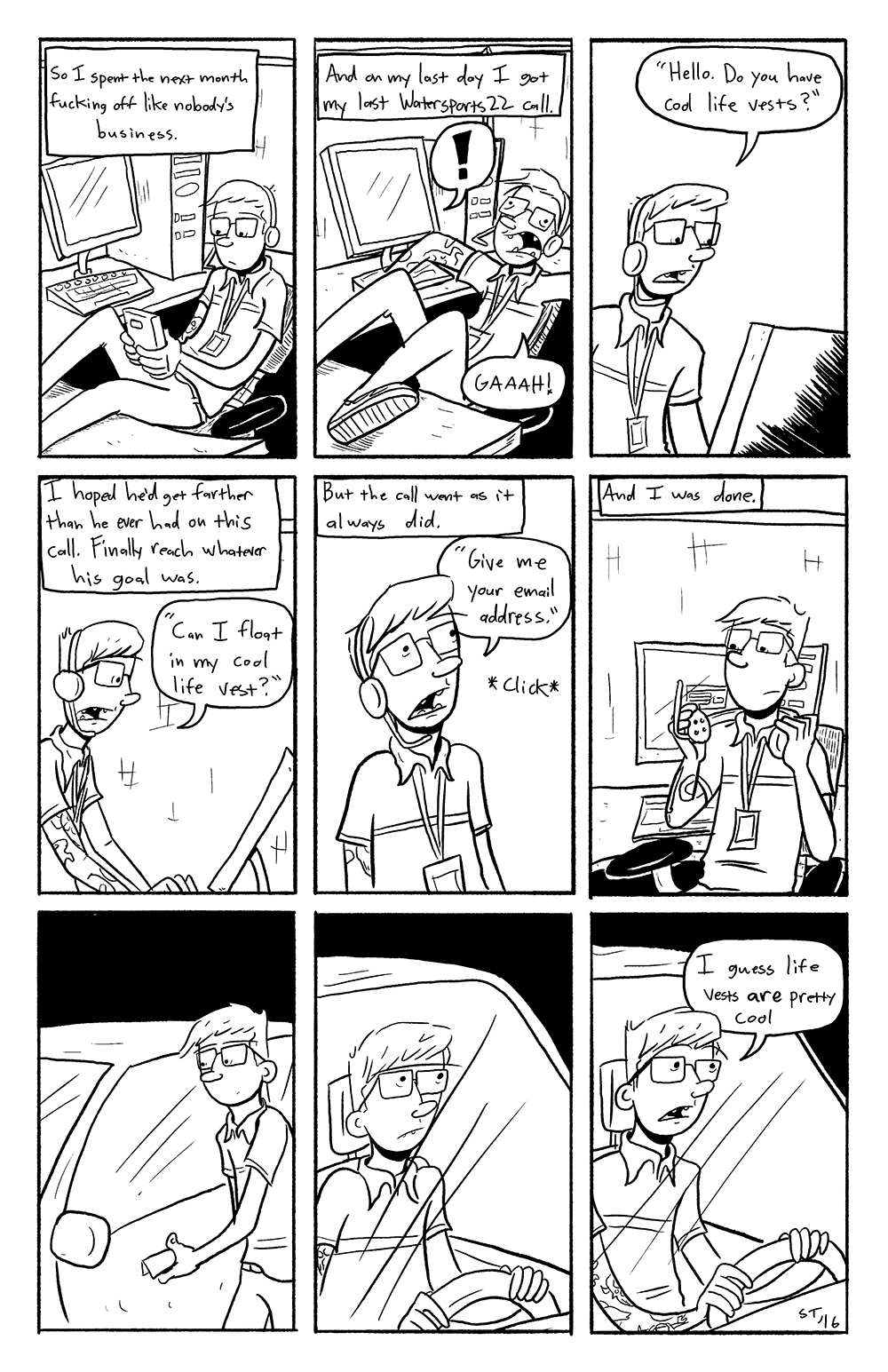 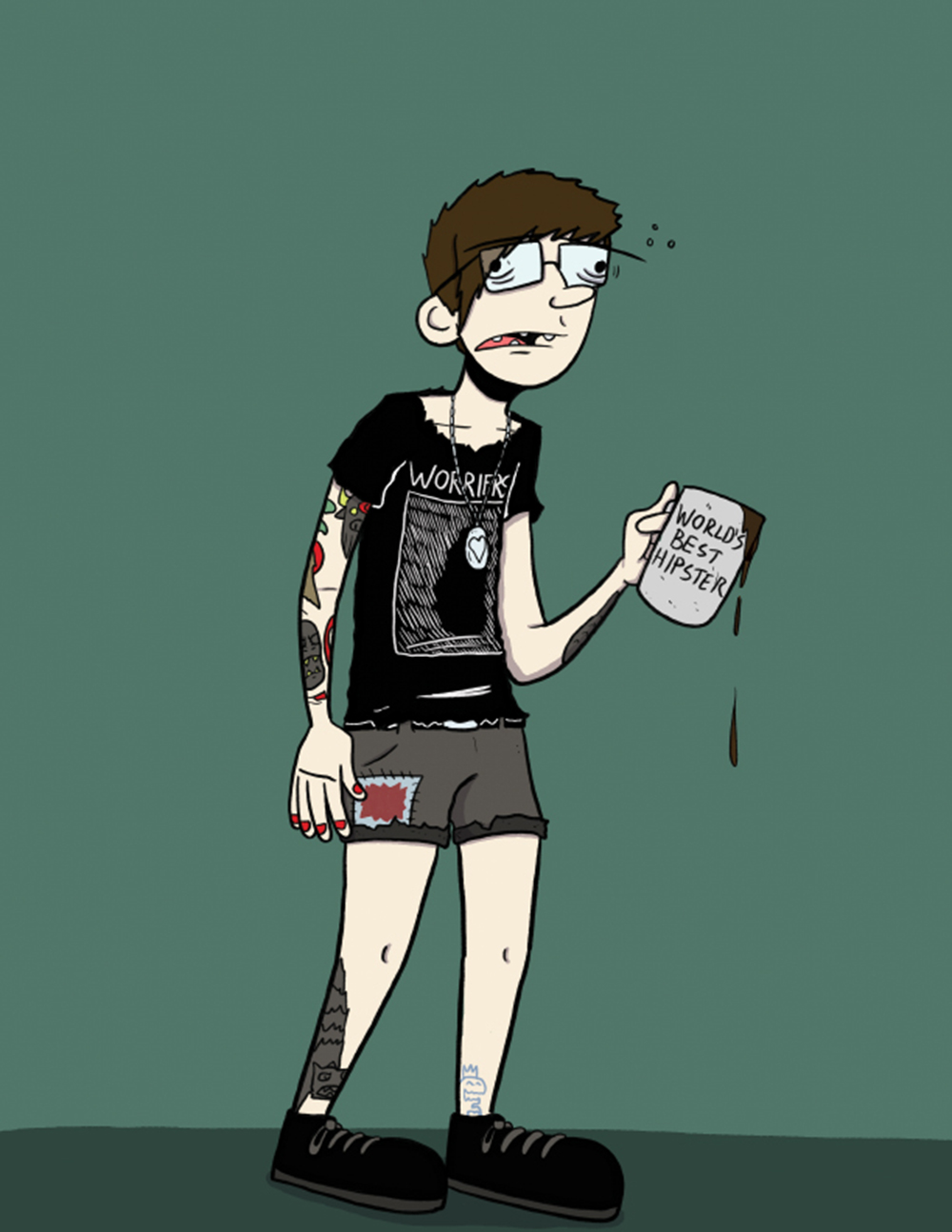 Interview with Steve Thueson by Natalye Childress for Silver Sprocket

Can you tell us more about the job you share in your comic?
I had just barely gotten fired from a soliciting-donations-for-non-profits job because I was very bad at soliciting donations for non-profits. But I liked working at a call center because I got to just sit and read comics between calls. My friend Mike, who played in this ska band Vanzetti Crime, had just quit the relay center, but had really dug working there and helped me get the job.

It was pretty mundane, but the pay was fine and I got to bring in homework and drew comics between calls, or just fucked around on the internet all day. And other than one or two really troubling calls, it wasn’t a job that I thought about when I wasn’t there.

Are there other moments you thought about that didn’t make the cut?
Yeah, pretty much the whole three years of working there I’d just mentally log things away to make a comic about. I kind of put all the highlights in the comic, but every now and then I’d overhear people in the cubicles next to mine relaying phone sex, or I’d get these little glimpses of family drama the people calling would have. But the job was basically 90 percent calls to Verizon.

What is the BEST job you’ve had?
I really like the job I have right now. I’m a barista at the one coffee shop in the little Vermont town I’ve been living in the last two years. For the most part I’ve worked at call centers, or call center-type jobs. Like, before working at the relay center I’d call people to solicit donations for various non-profits, then relay center, then I’d conduct medical surveys, and finally I did data entry for the post office. So, like, having a job where I’m talking to people face-to-face and not just sitting all day is really exciting and cool. Plus I get to drink coffee all day.

What is the value or purpose in making art? Are there any downsides?
That’s a good question! I’m not sure. As long as I can remember, I’ve been drawing shit, and I have only ever wanted to be a cartoonist. I really love the process of making comics, and have made a lot of friends I love very dearly through making comics. Probably the main downside is how bummed I get when I’m not working on something, and how rarely I’m actually happy with a comic once I’ve finished it. But, y’know, love that process!

Do you think artists have a social responsibility?
I’ve been thinking about this a lot since the election. I suppose I do feel that artists (just like everyone) have a social responsibility, but I’m certainly not making comics with that in mind. There’s a lot of really great comics journalism and really important and cool art being made, and good and important work to be done, but I’m just drawing punks fighting monsters.

What are you working on now?
Well! I just finished grad school at The Center for Cartoon Studies. My thesis is a comic called Quest Mania about two punk kids setting up shows and going on Conan-the-Barbarian-type Sword & Sorcery adventures and fighting monsters. It’s pretty much everything I’m interested in all rolled into one thing, so I’m very very stoked on it. I’m trying to figure out the best way to get it out there, so hopefully this’ll be a thing that can be read in the very near future.

If someone liked your comic in As You Were, what would you recommend they check out next?
Check out What is a Glacier? (by the great great Sophie Yanow), which was just published by Retrofit Comics, and is a really and truly fantastic comic.