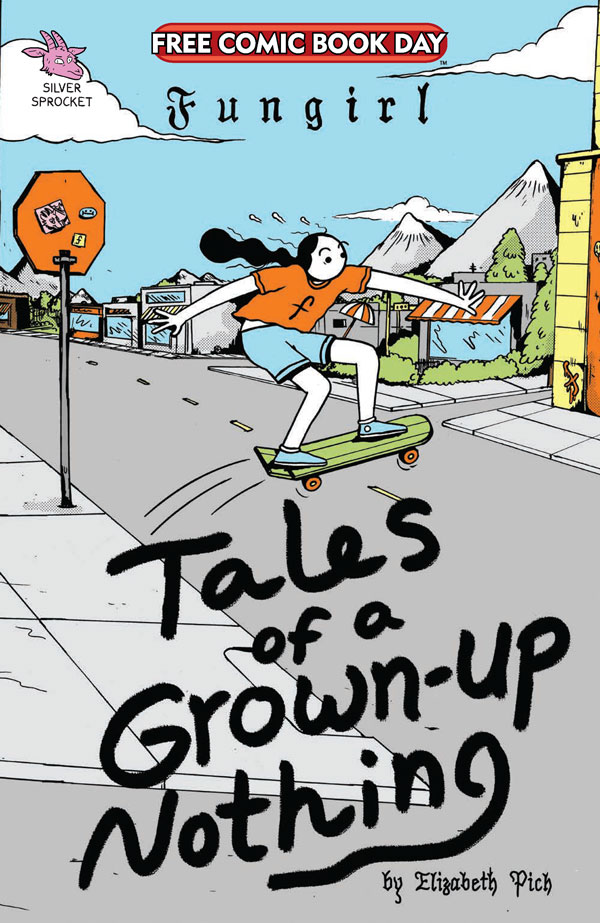 Silver Sprocket is delighted to announce that we’ve finally been allowed to participate in Free Comic Book Day this Saturday, August 14th!

If you don’t know, Free Comic Book Day is the yearly event when big-time comic book publishers get special issues of their hot titles distributed for free at comic shops across the country. We always apply, but have always been rejected. Until this year!

You can pick up a free copy of Fungirl: Tales of a Grown Up Nothing by Elizabeth Pich at your local comic book shop this Saturday.

We are also incredibly tickled to let you know that in our first year being allowed into FCBD, we still somehow fucked it up, because this comic was too spicy for the national sponsors. We had to literally stop the presses and remove the Coca-Cola advertisement right as the book was going to print. Was it the nudity? Maybe! Was it the part where Fungirl spears a pancake with a strap-on? Almost certainly, yes. 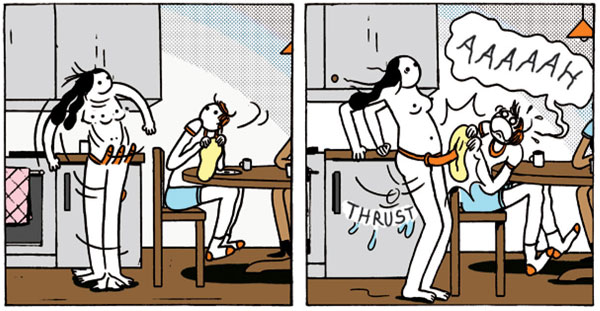 Now you can read the most forbidden comic this FCBD! Thirty-two pages of hectic hijinks with the titular Fungirl!

If you don’t yet know Fungirl, let us introduce her:
Fungirl is a hapless (hopeless) hot mess of a woman crashing through life, leaving chaos in her wake. Although her oblivious antics infuriate her roommate-slash-ex-girlfriend, terrify the teenage skaters she tries to impress, and threaten her every opportunity for employment, Fungirl remains charming, transgressive, and hilarious.

But don’t just take our word for it:

“No matter what wacky, exaggerated situation Fungirl finds herself in, it somehow still makes you say ‘I’ve been there, sister,’ though you’d deny it in polite company. She’s everyone’s most regrettable ex, but the one you got the best stories out of.” —Kelsey Wroten (Cannonball, The Ex-Girlfriend of My Ex-Girlfriend is my Girlfriend)

“Fungirl is a wacky trip through one impulsive act after another resulting in a cartoony, twisted world that I couldn’t get enough of.”  —Archie Bongiovanni (Grease Bats) 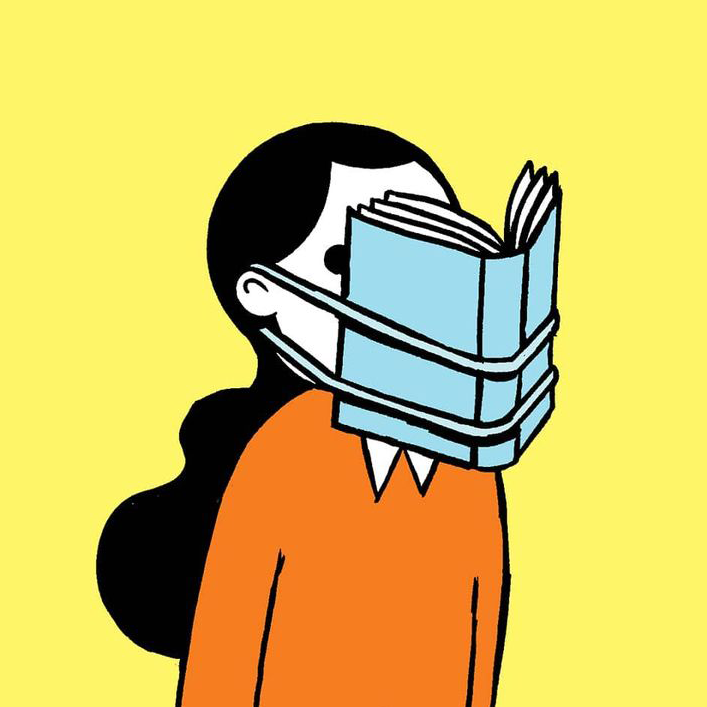 Author Elizabeth Pich is a German-American comic artist, currently living in Saarbrücken. After studying arts and computer science, she is working on an algorithm that will write all her jokes for her so she has more time to sit back and enjoy nutbars. In her spare time, she’s part of the band speedgirls. She is also the co-creator of the wildly popular webcomic War and Peas, and readers can look forward to that irreverent humor appearing in Fungirl, while also offering a rare taste of unadulterated queer disaster that hits the sweet spot of adult comedy.

Relatable yet absurd, and with an underlying sense of kindness and humanity, Fungirl is perfect for fans of Tuca & Bertie, Fleabag, and Megahex.

If you like the Free Comic Book Day issue, there’s more where that came from!

We’re releasing a hardcover, deluxe edition of the fully collected Fungirl comics on October 13th.
Over 250 pages of full-color comics, and Fungirl may actually learn a lesson by the end of the book. Be sure to preorder with your local shop! 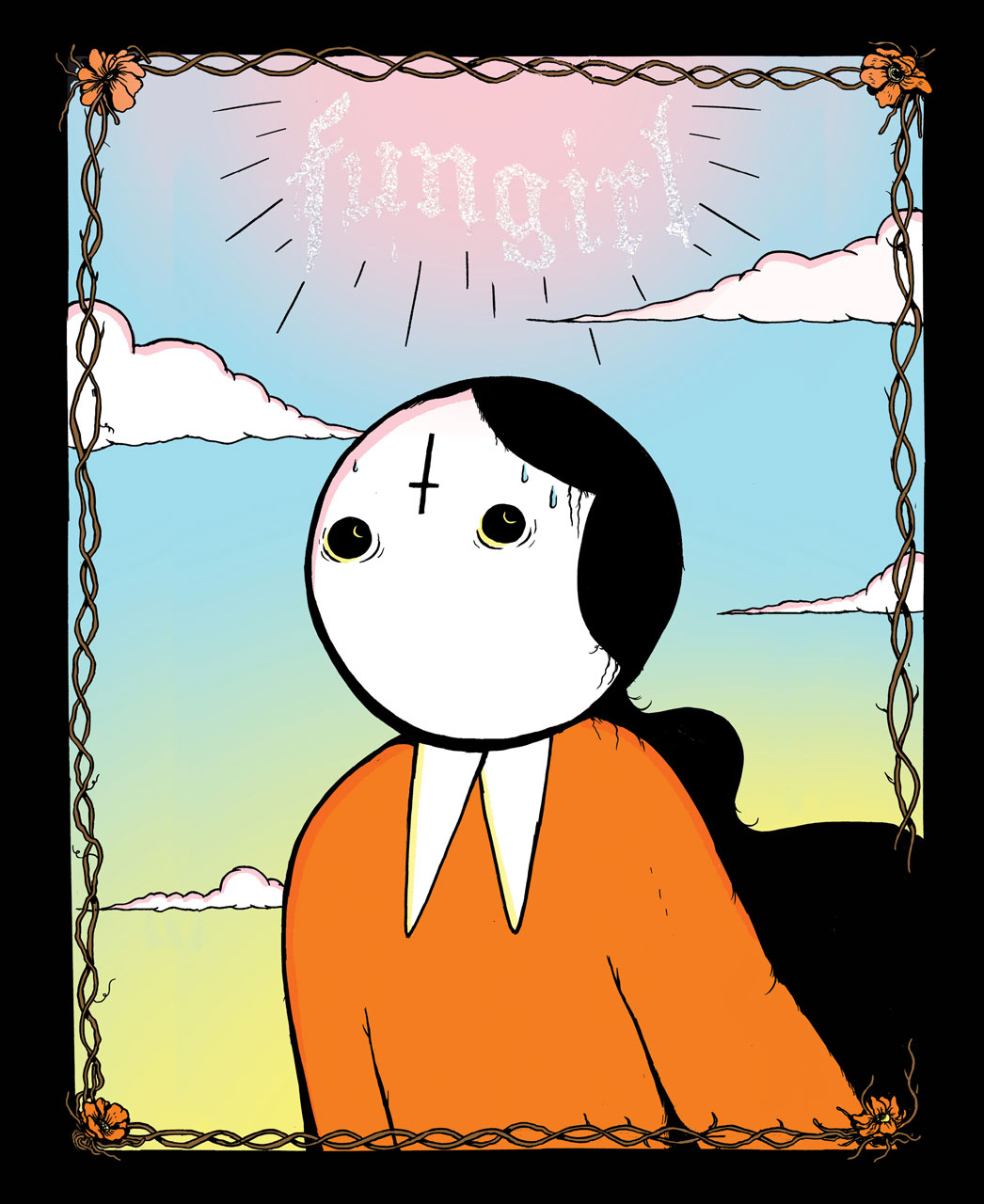