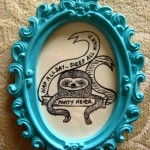 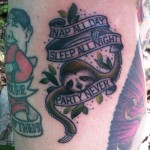 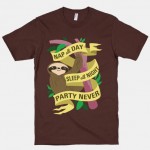 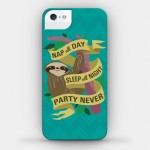 fucking what the fuck!

As Liz Prince said, Let’s be civil, folks, but let them know that internet plagiarism is a pretty shitty business model.

Are you fucking kidding me, Tumblr? Can this shit stop already?

The top image is a drawing by Nation of Amanda. You remember, the one whose “I want to pet all the dogs” and “I want all the cats to love me best” designs were reblogged ad infinitum with the credit removed by thoughtless Tumblr users, ultimately being completely co-opted by some uncreative twit who was more than happy to take credit for the several thousand reblogs she received for stealing someone else’s idea.

Amanda made a third thing in that series, the sloth pictured at the top. This was the rough concept art which I thought was too funny to redraw, and she put it in that frame and hung it on the wall, posting the picture to Tumblr.

That was four months ago. Four months, that’s all it takes, apparently.

Because then someone modified her design into a tattoo. To their credit, they asked for permission and gave Amanda full credit when they posted the picture on Tumblr. But, of course, it’s Tumblr, so their crediting Amanda as being the one who came up with it in the first place was erased by the couple thousand people who reblogged it afterwards.

Enter Look Human. These walking pieces of human excrement saw either Amanda’s design or the tattoo inspired from it, and went ahead and stole the concept outright to sell on t-shirts and iPhone cases.

Amanda hasn’t even seen this yet. She’s at work. She’s going to come home from a ten-hour shift (yeah, we’re not all so fortunate as to get to steal other peoples’ intellectual property for sale in our fucking web store) and this is what she’s gonna see. And she’s going to cry, I know she is, and I’m going to have to console her and tell her it’s okay.

But, you know what? It’s not okay. It’s absolutely not okay. You talentless, uncreative fuckwads at Human should be absolutely ashamed of yourselves. Seriously, fuck off and die.