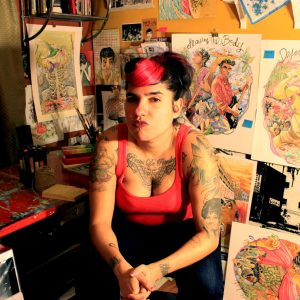 Cristy C. Road is a Cuban-American artist, writer, and musician. She began her career publishing ‘Green’Zine’ in 1997 – a fanzine which was originally devoted to punk rock group Green Day. In early 2006, C.Road released her first illustrated novel, Indestructible (Microcosm Publishing), a 96-page narrative about high school. In 2008, she released Bad Habits (Soft Skull Press), an Illustrated story about healing from abuse; and lastly in 2013, her most recent book, Spit and Passion (Feminist Press, 2012), a coming-out memoir about Cuban identity, discovering Green Day, and survivng in the closet. C.Road’s most recent project is The Next World Tarot (2017), a 78-card tarot deck detailing themes of justice, resilience, accountability, and reclaimed magic; illustrated, written, and initially self-published by C.Road. Aside from creating art; Road is a songwriter and guitarist, having fronted the pop-punk group, The Homewreckers from 2008-2016. She currently fronts Choked Up, a project that doesn’t stray too far from the Homewrecker’s foundations, but proves a departure in style and bilingual lyrics.

you can finally get mini decks for $20

Presenting The Next World Tarot by Cristy C. Road

We are ecstatic to be working with Cristy Road to help distribute her NEXT WORLD TAROT card deck and guide book.