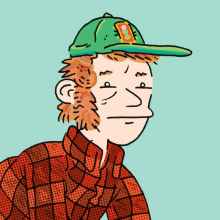 James Stanton has always been drawing comics, but he started drawing his comic “Gnartoons” while living in Eugene, Oregon back in 2005 where the comics were regularly printed in local publications like the Eugene Weekly, the Daily Emerald and the Oregon Voice. It was also in Eugene that James began self-publishing his own zines and mini comics. Eventually James moved to San Francisco where he continued to draw and develop his own cartooning style. In San Francisco he did work for blogs like the Uptown Almanac, Fecal Face, and Mission Local while maintaining a steady production of self-published titles and contributions to comics anthologies. James now lives in Seattle and has had his “Gnartoons” comics appear within the pages of magazines like the Nib, Thrasher, and BusinessWeek as well as newspapers such as the Stranger, Seattle Weekly and the Intruder comics newspaper. He’s drawn comics and covers for existing titles such as Adventure Time, Regular Show and Wrapped Up. He has also drawn a slew of official posters for the likes of the Seattle Seahawks, George Clinton, Seattle punk and noise music shows as well as many other bands, musicians and events.

Morsel by James the Stanton

A forest populated with strange monsters is full of mysteries

Squatters of Trash Island by James the Stanton

Taste the frothy brine of the Pacific Ocean alongside the hardscrabble band of degenerate squatters who inhabit it's plentiful trash islands.

I first noticed the blowhole stains...

Check out James the Stanton's Gnartoons comic from the latest Thrasher Magazine. Today is James' birthday, get his comics on sale this week for half-off with the "gnar" discount code.

A Message To You

Fin and Jake get squishy and wet in James the Stanton's back-up story from Adventure Time #26, Sphagnum Shmagnum.