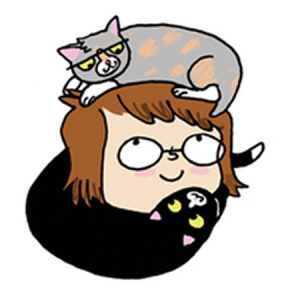 Liz Prince was born in Boston, MA, in 1981, and grew up in Santa Fe, NM. In 2002, Liz returned to Boston to attend the School of the Museum of Fine Arts, where she received a BFA. Liz draws comics full time, and lives in Portland, Maine, with her cats Wolfman & Dracula, and her husband, Kyle. Her first book, Will You Still Love Me If I Wet the Bed? (Top Shelf Productions) received the Ignatz for Outstanding Debut in 2005. She has drawn comics for dozens of anthologies, self-published many mini comics and zines, and has contributed to several Cartoon Network comics properties such as Adventure Time, Regular Show, and Clarence. Garfield came over to her house for dinner once (he hated it). Liz’s first graphic novel, Tomboy: A Graphic Memoir, was released in 2014 by Zest Books, to critical acclaim, and has since been published in French, Spanish, Korean, and was adapted as an audiobook. In 2017 Liz created the punk comic series Coady and the Creepies for KaBoom!

My Exploding Heart by Liz Prince

Liz Prince provides some touching insight into grief and mourning in the punk community.

This comic poem by Liz Prince cured my allergies.

Cooking With The Methodones by Liz Prince

Make Me a Mixtape by Liz Prince

Remember mix-tapes??? Fresh comics from Liz Prince's Be Your Own Backing Band

This Is My iPod by Liz Prince

Punk Rock is Ruining My Teeth by Liz Prince

Be Your Own Backing Band, Introduction by Liz Prince

Being in a band isn't the only way to contribute to your scene, today's comic by Liz Prince.

Oh the horrors of going to a house show by yourself!

Presenting Be Your Own Backing Band by Liz Prince

Presenting Be Your Own Backing Band by Liz Prince, collecting punk rock adventure comics from the creator of Tomboy, Coady and the Creepies, and Will You Still Love Me If I Wet The Bed? Read on to preview the first few pages.

Liz Prince is someone whose illustrated anecdotes are guaranteed to make us laugh, but in addition to sharing more about her cats' lives with readers, Prince also tackles many deep, thought-provoking, and important issues surrounding gender, identity, and emotions. Read on to find out about how she's seen the comics industry change, her advice for those who deal with anxiety, and her dental fixation.

Wolfman approved. Get all your necessary Liz Prince items here!

Silver Sprocket at TCAF This Weekend!

Toronto Comics and Art Fest is our favorite comics event on the planet (tied with SPX), we are honored to be back this weekend! The Silver Sprocket table is in the first floor lobby so they can keep a better eye on us after last year. Find us blushing and giggling next door to our megacrush Fantagraphics for shenanigans and world premiere fresh gear from Liz Prince and Michael Sweater. Bring cleverly hidden whiskey.

As You Were: Living Situations, Available now

Liz Prince’s work appears in all three of [...]